Marvel Tsum Tsum is already putting every other Disney game I cover on this site to shame by releasing new characters a mere week after its release.  Today we got a lovely little In-App update filled with some favorite characters of mine along with news of our next […]

Today we got a cryptic message on Facebook which lead to a cryptic image on Instagram from the DMK squad.  Rumors have been circulating the Pirates of the Caribbean would soon be ARRRRRiving in the Kingdom, and today’s post seems to confirm such a fact.  However, it doesn’t […]

Do you like cute things?  How do you feel about Marvel super heroes?  What if I told you that there is a magical place where cuteness and Marvel collide in a battle of epic proportions?  Well there is such a place.  And no, it is not a puppy […]

The world of DMK has been a bit quiet this past week, but two very interesting developments have come to the forefront over the past two days, which made me decide it was time to check in with all of you.  How are you?  Is your summer treating […]

Hello my fellow internet…ers… Hmm.  I haven’t written a post all week so excuse me if I need to warm up a bit.  Today we are going to do something unheard of for this site.  We are going to talk about a game that has NOTHING to do […]

I’ve just spent a most lovely day playing board games with a good friend from back home in Colorado.  Yet even so, I managed to find time to download the newest in Disney gaming, a hidden object game which pairs you up with Judy Hopps and Nick Wilde […] 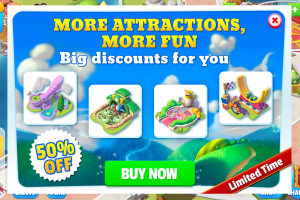 Today is a big day for everyone playing DMK because some newness has struck and it’s sure to salivate anyone who hasn’t already completed their kingdom.  First up, let’s talk about the sale as I think that is the best thing about today’s events. Attraction Sale That’s right! […]

Last night I logged into my DMK game to see that an invitation to take a survey had been posted, so of course, wanting to do all the DMK things to tell you my thoughts, feeling and weird twitches my stomach makes during them, I took it.  And […]