Wow, can you believe we’ve been playing this game now for 30 Days?  How do I know?  Well tonight I will be getting my 30 day reward.  That’s how I know.  I have a lot to talk about since our last update.  After all, we’ve had our first event and another has just begun.  I’ve been exploring Tomorrowland, unlocking characters left and right and trying to earn enough potions to complete every little task that gets thrown at me.  Herein lies my impression of all of these things so far as we head into the next 30 days. If there’s one thing I’ve noticed while treking my way through Tomorrowland, it’s that I keep being given tons of characters to unlock.  Mike, Sully, Eve, Celia Mae, Roz and the list goes on.  All of them are crazy expensive as well, forcing me to really set in with my park economics and find the best road to unlocking characters, opening up new buildings and cursed zones and leveling characters who have tasks to perform.  It’s a lot of stuff to keep track of and I was, at one point, really astounded by how many quests I had lined up.  Of course, I had to be able to afford them one at a time and at 45,000 potions and up, this was not the easiest of tasks. 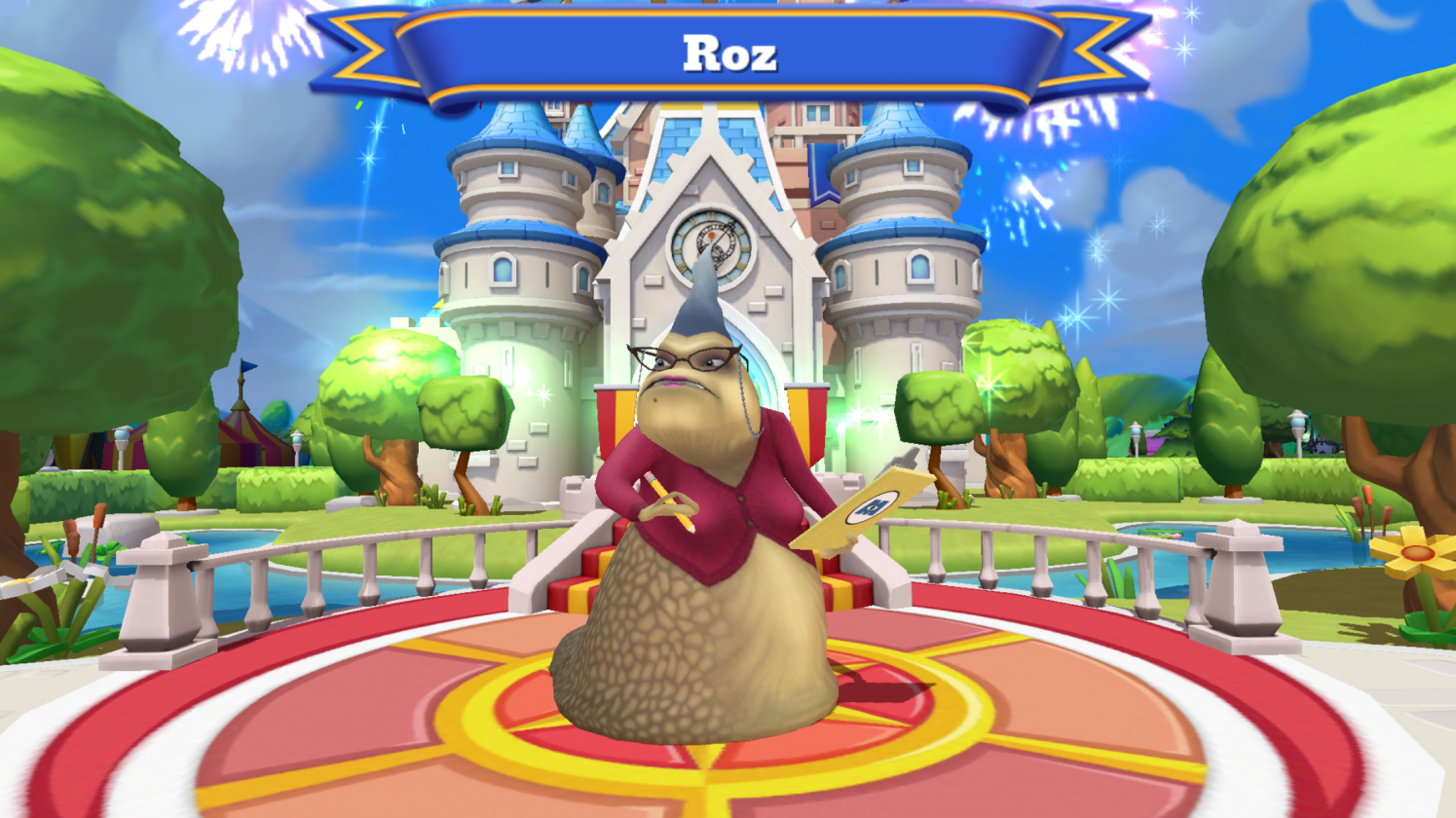 …And took the Wall-E promotion. This game makes me make bad choices.

I have mixed feelings about our very first event.  On one hand, I liked that there was one more thing to do.  On the other, that one more thing was clicking on some birds every couple of hours.  I also found that trying to click on them could be a pain and, as many have noted, there is no “Are you sure” button on gems so more than once I ended up spending gems on something silly when I was just trying to click ravens.

Also, did anyone notice the rather odd state of the leader board on this one?  I think everyone was number one in some form at some point on their own game and no one’s matched up.  My mother actually did win one of the number one prizes, which I thought was pretty great.  However, she had to contact Gameloft for her prize as they apparently assumed those in number one were hackers and did not gift them their prizes.  You can’t have a contest and then accuse anyone who wins of cheating!  I mean, you can, but where is the fun in that?

The rather odd case of the confused leader board.

Starting today, we also have a NEW EVENT which involves Magic Brooms…and clicking on them.  Hmm.  Where’s the originality?  I’m pretty sure I will say this in every post until I get it, but we really could use some mini-games.  I want there to be something in this game, other than park visitors that has to do with skill, rather than just hours or money you put into the game.  Is that too much to ask?  IS IT???  Oh, also, is anyone else getting this fun thing where ravens also show up whenever the brooms do?  Weird. 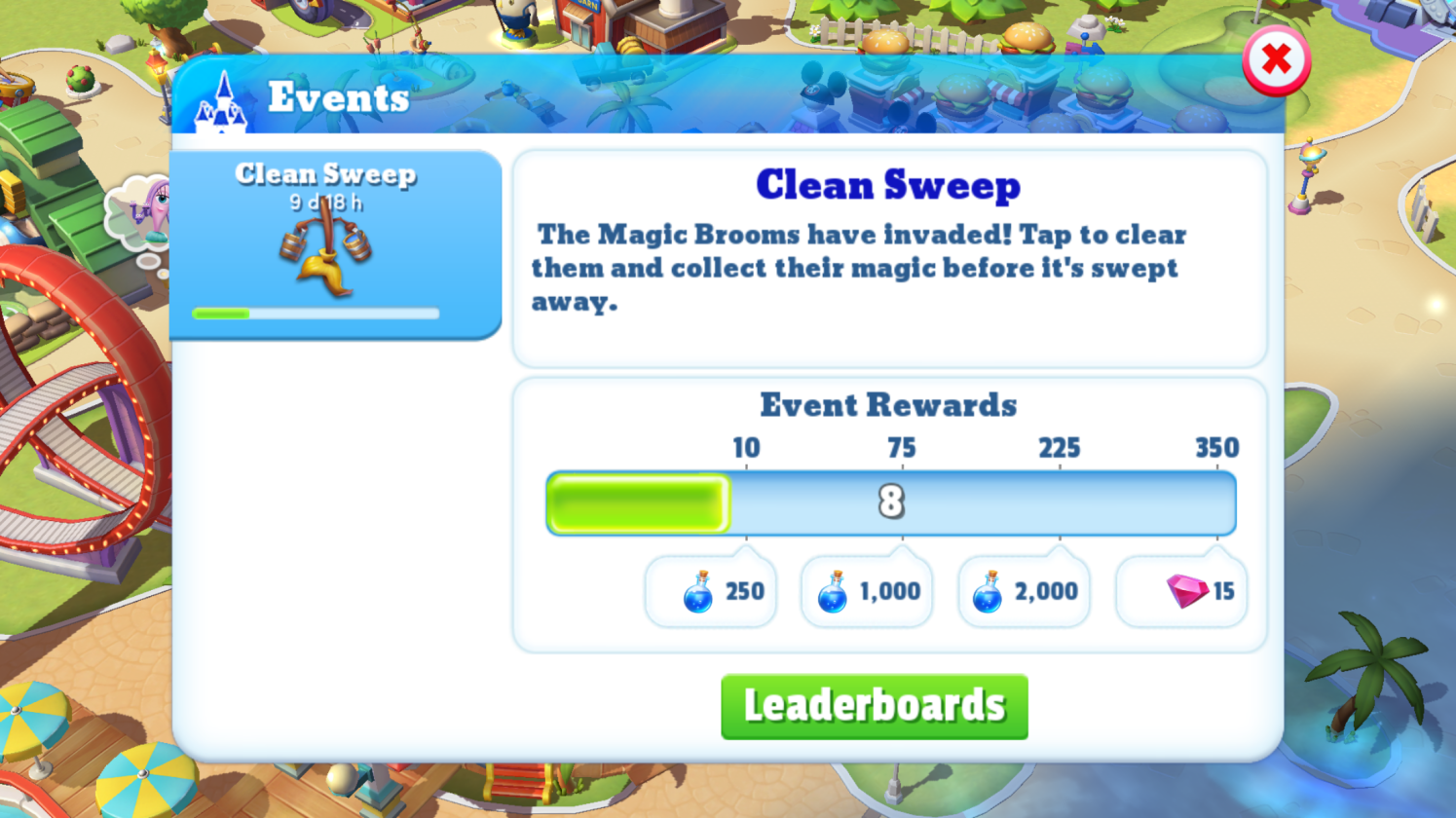 Alright, enough griping.  Here is something really great that Gameloft did.  Many folks are still suffering from a lack of Daily Rewards, which means a lack of Tinker Bell.  Luckily, Gameloft has heard the call of the saddest and has started sending Tink to players who have played five days but not received her!  Happy Day!  Oh wait, we’re about to get our 30 day reward.  Alright guys, you know what to do.  Let the complaining commence once again.

After days of working through quests, I finally got my chance to fight Zurg.  I’m sure there will be many questions regarding how to get to him so I will say what I said with Pete:  Just continue doing quests and eventually it will happen.

I now know that the unlock feature for the battle has nothing to do with which quests you do, but how many of them you have completed.  Case in point, I asked a fellow gamer what quest she did before it opened up.  She told me she unlocked Pete and then did his first quest and then she was fighting Zurg.  So I scrimped and saved for Pete, and then did his quest…and then nothing.  It wasn’t until I unlocked Roz that it opened up the next part of the Zurg quest.  My advice from all of this is to simply be patient and do the quests assigned to you.  UNLESS IT IS A QUEST FOR A PAID CHARACTER (I.E. Pluto, Rex, etc.) IT PROBABLY NEEDS TO BE DONE FOR YOU TO MOVE ON!  There, I said it loud and clear.

As a side note, Zurg can be fought with Buzz, Woody, Jessie and Rex.  He requires a total of 10 characters taking 12 hours each to defeat him.  So if you have all 4, you’re looking at three twelve hour sessions to finish him off.  If you don’t have Rex, you’ll be doing 4 12 hours sessions, or two days.

As of writing this, I am getting fairly near beating Zurg and opening up my next new area.  I am also very close to summoning Eve which is exciting because Wall-E has expressed missing her to me.  I can’t wait for the first true update to this game.  No, I don’t mean a bug fix.  I mean something that really adds to the game.  New characters, new quests, new zones.  MINI-GAMES!!  I’m not giving up on this one Gameloft.

What new addition would you most like to see in the game?  It can be anything.  A zone, a character or something totally off the wall.  Let me know in the comments!