Hello again and welcome back. I’ve been busily plugging away at the game and wanted to give some updates based on what I’ve seen so far. Near the end of this article, you will also find some known issues that Gameloft is working on, as well as some quick fixes for a problem you might be having. So come all you Disney villain fighting magical ones and let’s see what new things have occurred in the Magic Kingdoms. If there is one thing I’ve come to really learn about this game, it’s that the more you build, the more stuff you have to do when you open the game. I have become a burger joint connoisseur, building burger stand after burger stand in an attempt to raise my income. I think the oddest thing about this is that Zurg himself seems to listlessly stroll through the aisles of Burger joints and it leads me to wonder if perhaps all this villainy could be avoided by simply feeding the guy. The opening of Tomorrowland definitely sees prices start to raise in the world of Disney. Immediately I was told that I could purchase Rex for around $12 and then later I found that Boo was the same deal. I will most likely get these once it becomes apparent that I need them for something, but for the time being, I have resisted the urge to go character crazy. I’m sad to say that Tink is, so far, the only daily reward character. Don’t get me wrong, several attractions which show up available through daily rewards have my eyes, but I’d love to see more rewards in the first 30 days than simply giving me one character and a few potions and gems here and there. Don’t be so stingy Gameloft.

Squeeze me tentacle monster, may I have my ride back?

Since opening Tomorrowland, I’ve added Buzz Lightyear as well as Mike Wazowski and Daisy Duck to my team.  My mom made a fair point the other day.  If it’s going to take so long to get these special items we need to open up these characters and if the drop rate is going to be so miserable, why do we then have to wait another God awful amount of time to actually get the character once we pay for them?

My guess, and this is only a guess, is that once updates start releasing, the wait times on these earlier quests will decrease.  At the end of the day, an update will advertise new characters and new lands, and they’ll want new players to get to these and start spending money.  This means reducing the curve of time it takes to get there.  We’ll probably also see more deals and gem sales and that sort of thing as time goes on, that will reduce waits and costs as well.

Since starting to write about this game, I’ve noticed that 90% of the comments on these posts have to do with people who are having in game issues and bugs.  In every case like this, the best thing you can do is to report it.  Gameloft has started resolving issues, but in the meantime, here are the known issues that they have recognized as well as some nice tips for solving some issues.

First off, the two known issues that Gameloft has acknowledged on their Facebook page are:

Rest assured, you are not the only one dealing with this and a fix is coming.  For some, it has already come in the form of Gameloft resetting their game and then sending them everything they had earned so that there is no data loss.  This fix seems to be working, but the only way to get this fixed is to report it so they can help you out.

Tip of the Day

I also want to add in the Tip of the Day bit that they have been doing on their Facebook Page, as I think many folks will find these quite helpful! 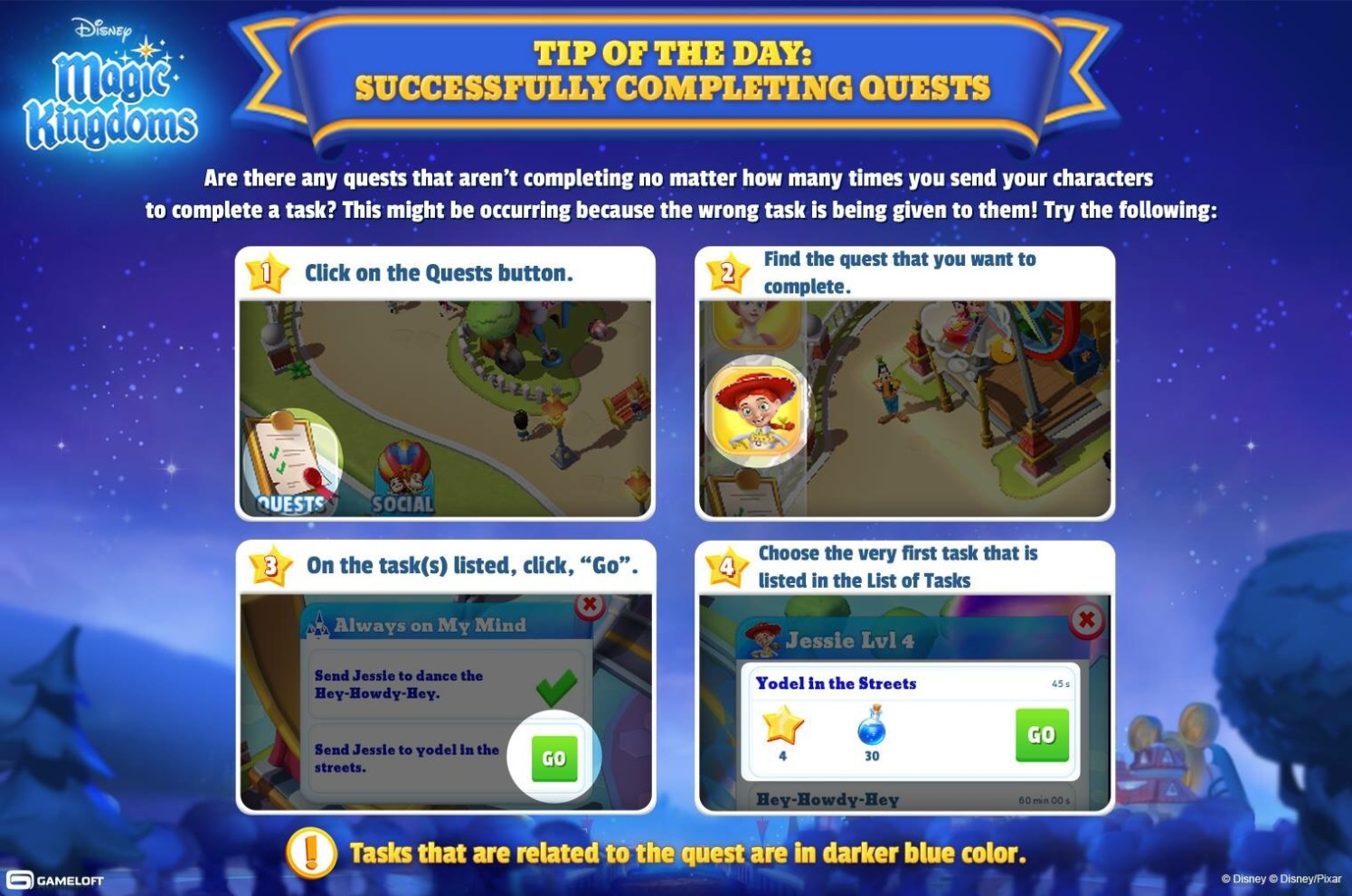 FINALLY!  I want to briefly mention that our very first EVENT is incoming!!!  What could it mean?  Gameloft released a teaser image to let us know that something is coming soon and I’m excited to see how it plays out.  Personally, I hope that this means more interaction with the community and fellow players.  What do you guys think?

See My First Impressions of the Game Here!

Thoughts on Defeating Pete and Opening up Tomorrowland