I didn’t plan on posting again so soon but given the hype of this game, I thought it might be fun to let you guys know where I am at up to now.  The game is now officially out for all platforms and you can find the links to all of those by heading over to Gameloft’s website for the game.

I have some things about the game that I am loving and some things that I am not loving so much so let’s jump right in and see what Day 2 had in store.

Many folks had a rough time getting into the game this morning as the website announced that the game was released when in reality it was only up for iOS.  Luckily this confusion only lasted an hour or so before Android players got to jump in.

I hit level 7 and didn’t see the rewards for pre-registering.  Luckily, I had some good people on Facebook telling me to stay calm and Disney-on and sure enough, halfway to level 8, my rewards popped up.  The rewards included a bare minimum of Magic and gems, along with a tiny Micky Topiary which is simply decoration, and a 60th Anniversary Mickey Hat Stand which is the most useful thing in the bunch.  Not only does it provide resources, but having it also means that young ones in the park will visit it and then run about the park with cute little hats. Upon not getting my level 7 rewards I visited the in game help menu where I was treated to some interesting things indeed.  It seems there is more to this game than meets the eye.  Slightly down the page, the question is asked about Dark Ravens as well as Magic Brooms, two thing which I haven’t seen yet.  Perhaps this is simply another collectible resource?  Then I noticed that their will be a leaderboard which I am hoping means even more Social Options.  I am finding the Facebook invite page in the social menu nearly impossible to navigate as it seems to not be able to find many of my friends.  Err, how am I supposed to invite them if I cannot see them?  Hopefully this is one of the first things addressed in our first patch.

The thing that is really killing me are the timers.  Look, I get it.  Games like this have timers, but these timers are steep even by those standards.  I haven’t been playing the game a full 24 hours and already today I was handed a six hour wait time!  Followed by an eight hour wait time! Gah! Welp, guess that’s it for a while…

I think that this would be okay if there were perhaps some sort of mini-game.  Look, Minions Paradise has wait times BUT they also have cute little mini-games that you can play anytime.  This means that at the very least there is something I can do in game.  In this game though, aside from collecting a few resources, I can go a full 4 hours already without having anything to do.  I know the idea is to buy gems but gems are steep and I don’t know how many parents are jumping at that price tag. 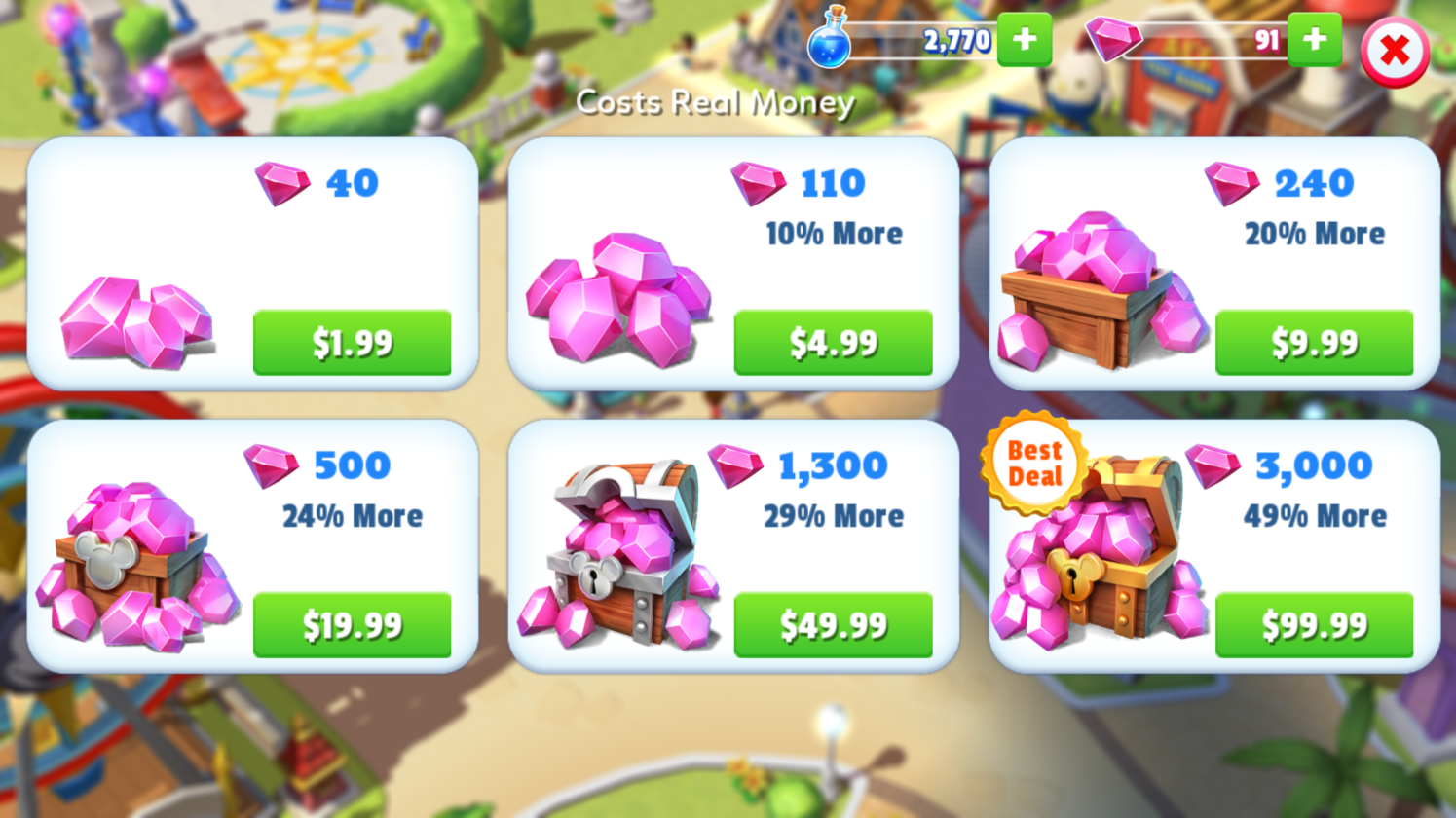 A full out RPG for your PS4 costs $59.99 but sure, $99.99 seems an appropriate price tag for gems that will last you all of two hours. Perfect sense.

Still, the Kim Kardashian game is rocking it in the money department so maybe I’m wrong on this one.  I know the wait times are a part of these games, but all I’m saying here is that the curve of them increasing in this game is no joke.  Give me a reason to keep playing Disney.  Make me want to not put this down, because right now, 90% of my day is spent with this closed for wait times.

But at least I built this cool roller coaster!

I caved to my first purchase in this game without a second thought.  As a ‘sale’ item, Pluto was being offered with some gems for $3.99.  Given the way that gems were trickling in and the fact that I love Pluto, I took the bait.  I want to support the game, I just don’t want to do it every time something has a wait time which is all the time.  Fun characters like this are probably the only way I’ll be spending money in game.  Just saying.  I also unlocked Jessie from Toy Story and I am well on my way to grabbing Bo Peep and Ham.  Hopefully those additions will happen sometime tomorrow.  I am also working on my next expansion and I have officially hit level 10! I’ve been a bit harder on the game today, so I will leave you with some positives.  Upon contacting the company on their Facebook page, they were super friendly and requested any additional feedback.  They want the game to be good and I love that.  The game is still adorable and I have very high hopes for the updates that are sure to be coming our way.  To say that I want more from the game does not mean I dislike it.  I do indeed like it!  That’s why I want it to be even better and to get the most audience possible.  There are sure to be rocks along the way but at the end of today, the more feedback we give, the better it can become!

We’re made of gold now Mickey, because everyone bought all the gems.

So how are you guys fairing so far?  I’ve already joined a Facebook Fan Group, which you can find HERE if you’d like to join as well.  What do you guys like so far?  What do you hate?  Which character do you hope to add to your park? Tell me! Tell me! TELL ME!