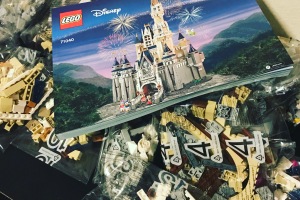 Many of you know by now that I while on my four park birthday outing, I made a split second decision at the end of the night which resulted in me purchasing the ginormous LEGO Disney Castle.  Coming in at 4080 pieces, this was easily the largest LEGO […]

Wow, what a crazy day.  After weeks of waiting patiently, we got our first glimpse of New York Comic Con and boy was she a beauty.  Everything was in tip top shape, the crowds were excited and the feeling was one of joy as we entered the hall […]

Every so often, a few of the things I love converge into one glorious thing to become something truly special.  If you’ve been with this blog for a while, you know that I have a soft spot for LEGO’s and especially LEGO video games.  Today marked the release […]

Wow, this week has been so crazy.  So crazy, in fact, that I almost forgot to write about the newest Star Wars inspired show from Disney XD, LEGO Star Wars: The Freemaker Adventures.  And that would have been a horrible shame because you need to be watching this […]

Wow, the Star Wars news just keeps raining in.  If you are a Star Wars fan, then your life is filled with all the happiness right now.  If you’re not…well, time to get involved.  We now have the announcement of an all new LEGO TV series, headed for […]

You know that photo online of that cat that’s usually captioned with “Heavy Breathing” and is attached to anything exciting and nerdy.  Well, that cat is me right now.  After being leaked yesterday, LEGO has released a trailer for their next game and boy oh boy am I […]

Hello there and welcome back. Marvel is a facet of Disney that I rarely talk about. Partially because I got into the Disney blogging game in between Marvel films, but also partially because, well, I’m more of a DC fan. But all of this is trumped by the […]

Hello all and welcome back to The LEGO Dimensions. This week I was supposed to research and report back to you about the thrilling history of Jurassic World. But it seems that last week did me in and I’m on a bit of a rest break this week. […]