Original Format: “Scooby-Doo, Where are you?” A 1969 CBS television show

Version represented in Lego Dimensions: “Scooby-Doo Where are you?” World

“Raggy! Raggy? Where are you Raggy?” Scooby-Doo might just be one of the most iconic American cartoon characters ever to have been created. An adorable great dane, Scooby and his friends were always trying to solve the next seemingly paranormal mystery, which often turned out to be nothing more than cheep tricks and special effects. But how did this lovable dog come to be? How did a television show, which almost never got made become so popular and worthy of being LEGO-ized? What exactly is the composition of a Scooby Snack? This week we’ll try to uncover the answers to these questions and more in a very spooky edition of The LEGO Dimensions.

Teammates to the end.

Back in 1968, there were several very popular cartoons on television. Shows like Space Ghost and Herculoids. There was just one problem. Parent organizations were upset by how violent these shows were. There go the parents ruining all the fun again. But I suppose they had a point. By 1969 most of these shows were cancelled and members of these parent organization were brought on to animation studio teams like Hanna-Barbera in order to help find shows that would be more appropriate. Fred Silverman, who was in charge of daytime programming at CBS, sought to appease these groups and also get a fresh start in the Saturday Morning time slot. The result of this was The Archie Show, based on the popular comic, Archie.

Several more shows were created and, wanting to continue his success, Fred contacted William Hanna and Joseph Barbara to create a show about a teenage rock group who solved mysteries in between gigs, Hardy Boys style. The show was originally called “House of Mystery” and when Barbara couldn’t quite get the idea to work on his own, he brought on writers Joy Ruby and Ken Spears along with artist Iwao Takamoto. The show now became something different. It was called Mysteries Five and was about five teenagers and their dog, all in a band together. Geoff, Mike, Kelly, Linda, W.W. and their dog, Too Much, yes that was his name, all went to solve mysteries whenever they weren’t playing up some jams. Too Much actually started as a great dane, but was then changed to a sheepdog to mirror that of Archie. Yet, in the end, the characters became too similar and Too Much was once more changed back to a great dane. Thank goodness!

A sheepdog would have made this shot far less funny.

This treatment needed work, so it went back to processing as the characters changed to Fred, Velma, Shaggy and Daphne, dropping one of the five and once again being renamed to “Who’s S-S-Scared?” CBS’ president found the show too scary for kids and passed on it. Back to the drawing board, the team toned down the scary bits in an effort to get the show ready to be presented for the CBS showcase. On a flight to one of the meetings, Silverman was listening to a Frank Sinatra song, and inspired by the scat at the end of ‘Strangers in the Night’ decided to rename Too Much to Scooby-Doo. At this point, the show took on one final name change, “Scooby-Doo, Where are You?” and was approved for production. Yikes, that was close.

Images like this were cut to keep it less scary.

Since then, several different shows, movies, books, comic books and more have been made from Scooby-Doo. He’s an icon, a legend among dogs. It only made sense that he be LEGO-ized.  Let’s get one thing straight.  As of this writing and with only the release of Phase 1 of the LEGO Dimensions sets, Scooby is by far, hands down, without a doubt the cutest character in the game.

When Batman shows up, he sings the Batman theme, Scooby style.  His ‘Stealth Mode’ involves dressing up as a grandma in a pink moo-moo.  He is also a blast to put inside the different vehicles of the game as his reactions are always hilarious.  Our favorite game to play is “What will Scooby do in this new thing we just built?” 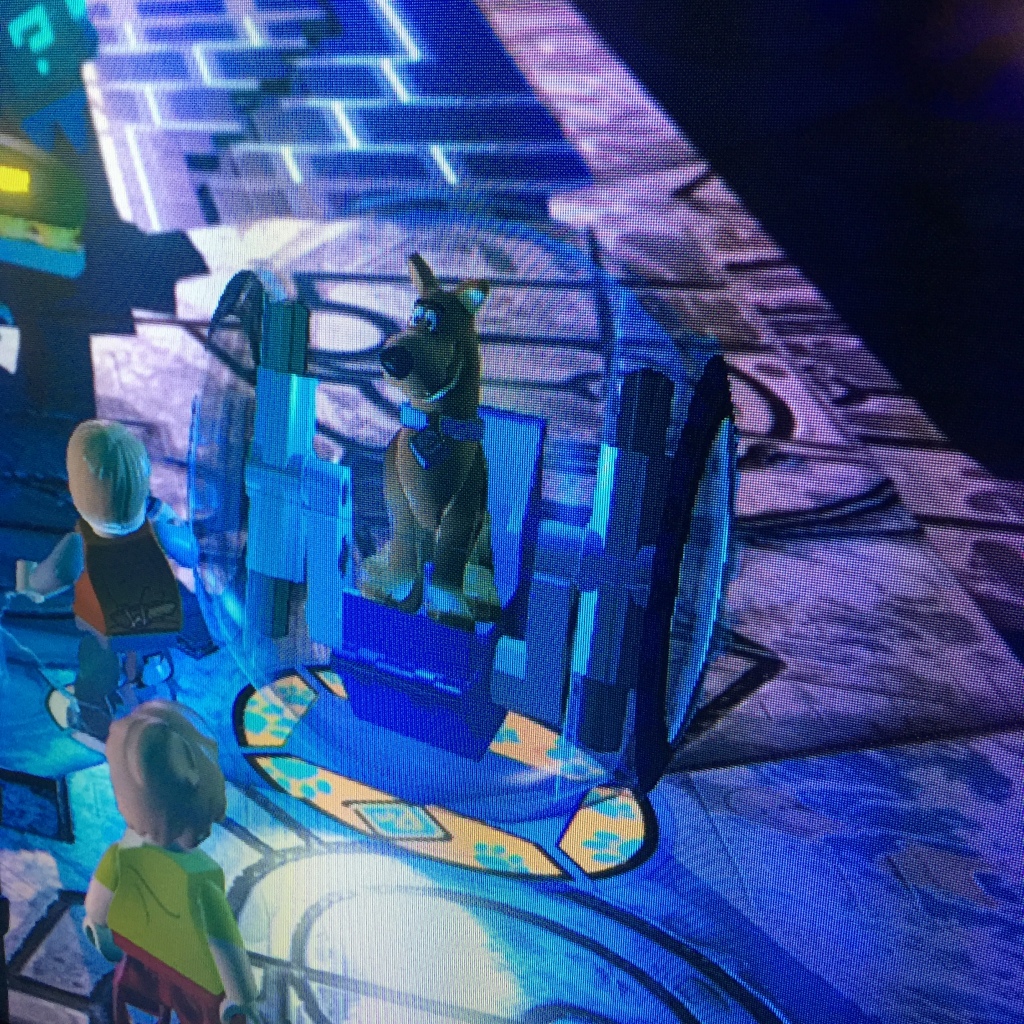 Seriously, you need Scooby just for the ridiculousness that is him riding the Invisible Jet.  I can’t even.  Scooby and Shaggy come with the Mystery Machine, which is awesome, and a sandwich…which is a sandwich.  Let’s take a look. 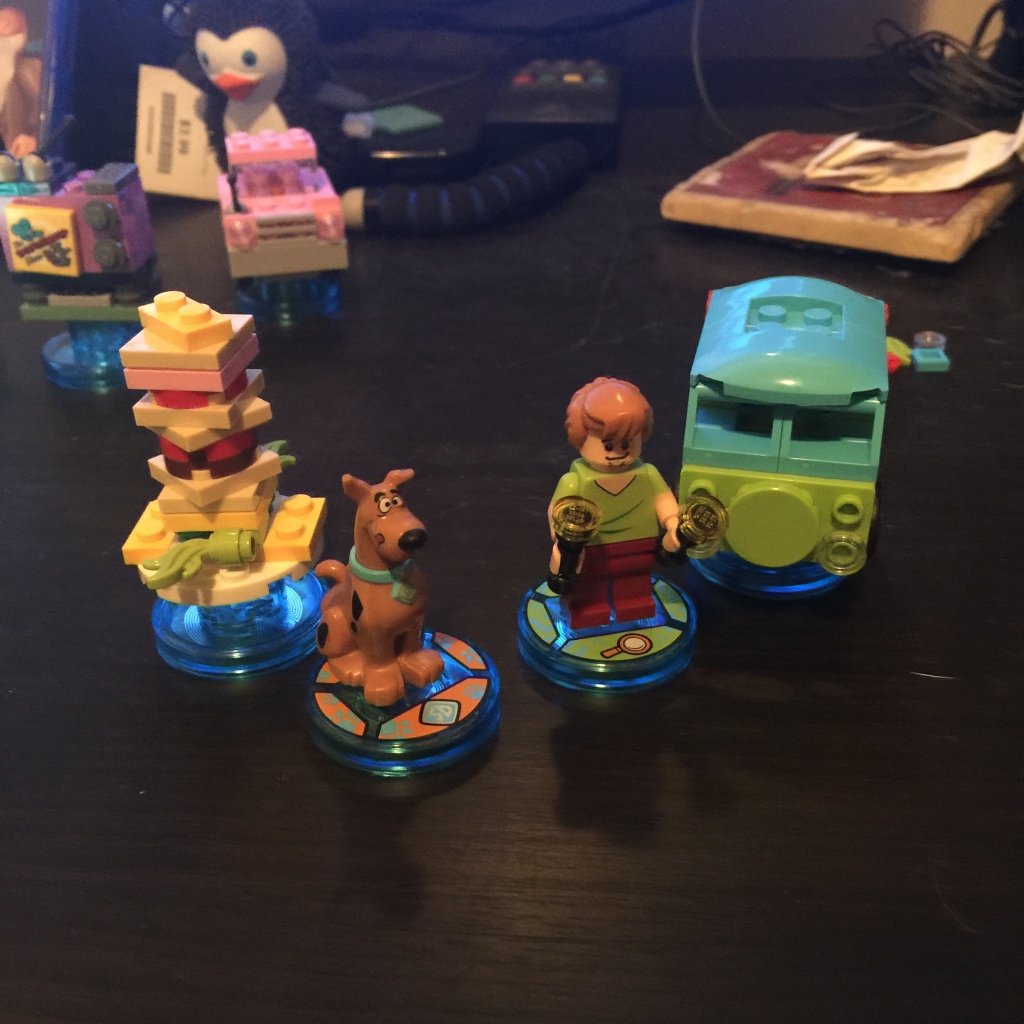 As you might expect, the sandwich is pretty silly and builds quick.  When eating it in the game you become super huge size and can deliver the beat down on enemies or perhaps walls that appear weak.  The Mystery Machine just looks cool to drive around in, but hey, sometimes that’s all you need.  I’ve noticed, and I’ll probably mention this again that with every pack with two different ‘items’ we usually find that one of them is really cool, while the other seems a bit phoned in.  This is the case with this set.  But surely, upgrading will change things, right?

I notice that as you upgrade vehicles they become faster in game.  So fast in fact that they are often not manageable.  Just know that the cooler your vehicles get, the higher your chances of running off the edge of the world.  All power comes with a price.  And what about the sandwich? 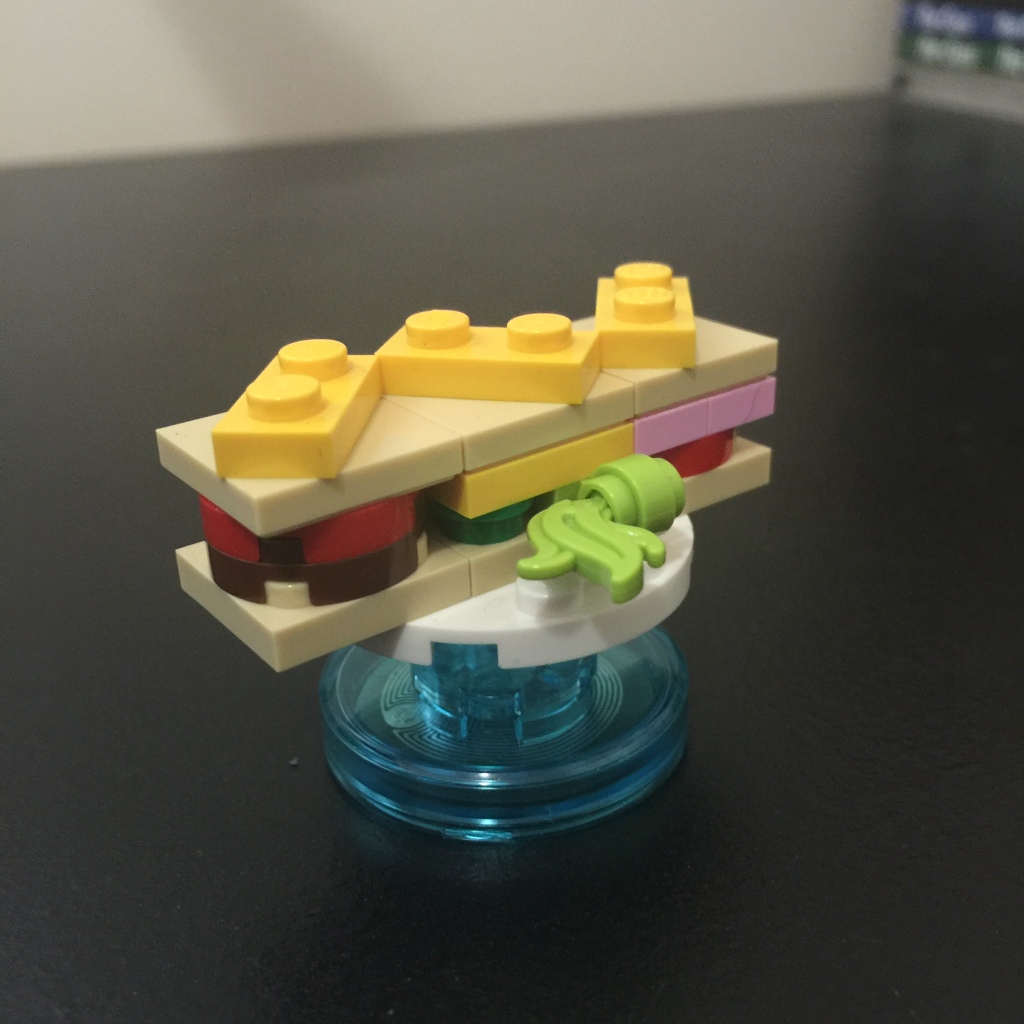 You know I like my six inches like I like my LEGO subs, made of bricks?  Hmm.  I’ll have to work on that joke.  This puppy is more than the sum of its parts though (see what I did there?)  When you eat this one, you get to shoot fire out of your mouth, just like your Mom.  Hey-oh!  Oh dear.  What is happening to this post?  Let’s move on to the third digivolution of these little guys before I pass out from exhaustion.

My thoughts are that this is great to have in game because it sprays water, which I previously thought I’d need phase 2 or 3 characters to do.  Great!  We can grow things and get more parts.  But it’s so damn lopsided that it falls all over the place.  Driving it is only advisable if you have the plants and they need the watering.  I like that it really looks different than our initial Mystery Machine though.  That’s a win.  Meanwhile, in sandwich land… 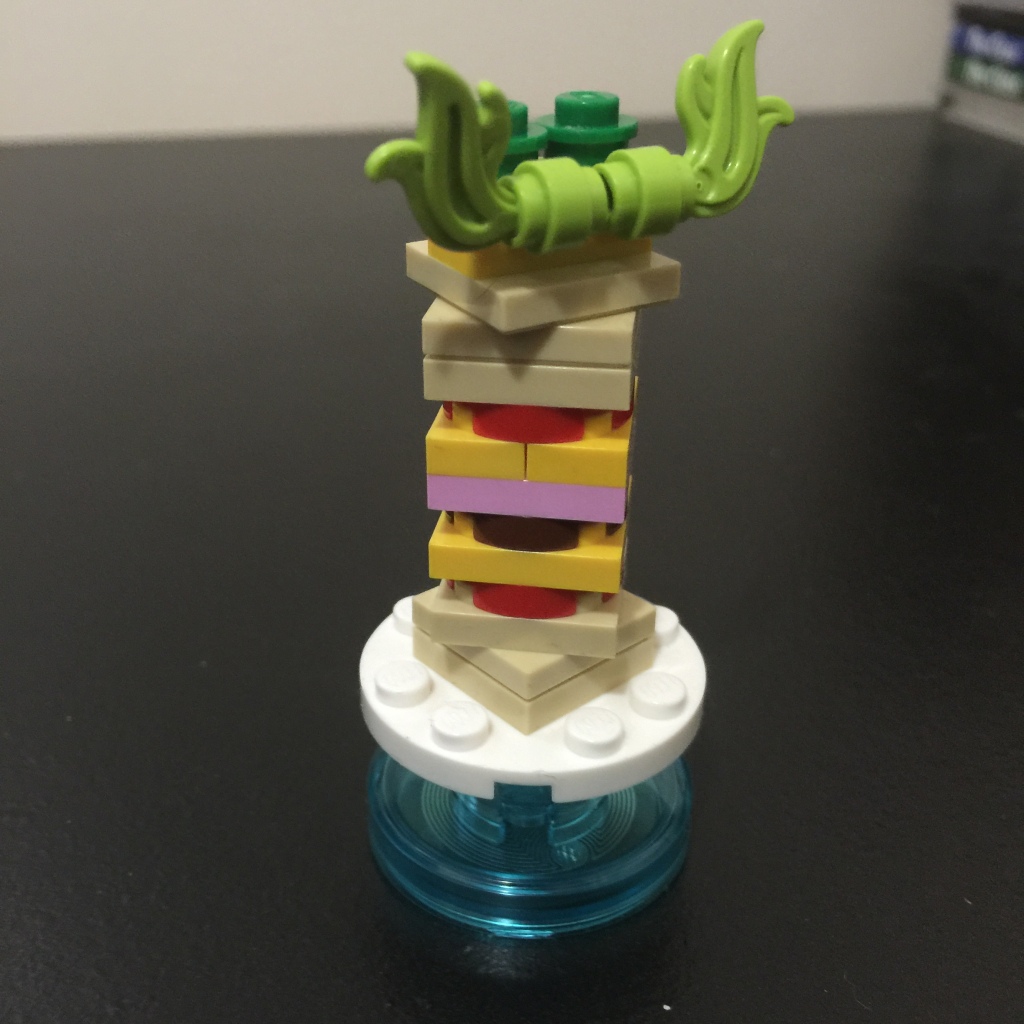 Did we just go back in time to the first one and I missed the jump?  No?  This one is actually the third and is really only slightly different?  Huh.  Okay, well I’ll go with it.  It can turn you into a ghost so that’s pretty neat.  But seriously? There was no other configuration here?  It was either going to be a tall sandwich or a long sub?  Nothing???  Oh well, you can’t have everything. 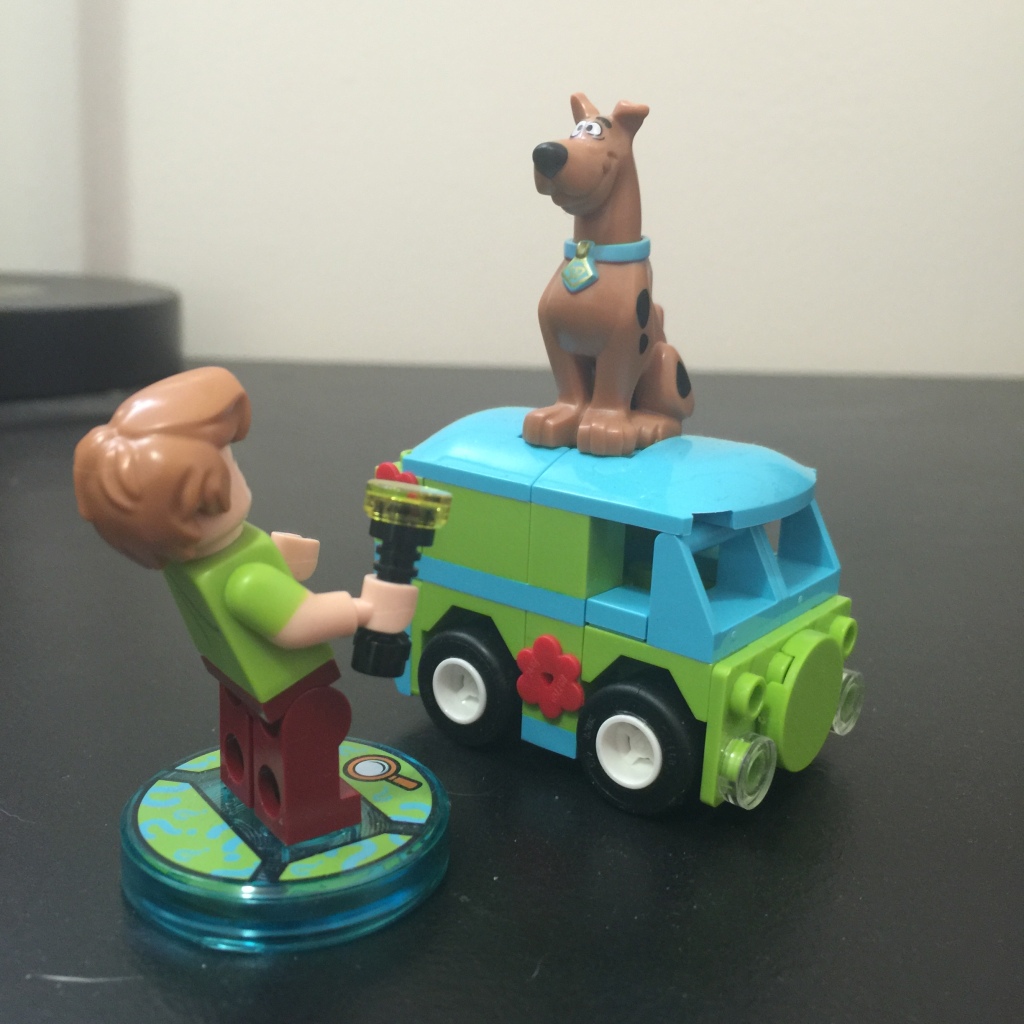 Scooby! Get down from there!

The Scooby-Doo set is available now and I highly recommend it.  Whether or not you need Shaggy or any of these vehicles is a moot point.  I have laughed harder at the nonsense coming out of Scooby’s mouth than any other character in this game.  He is adorable, hilarious and comes in handy at dig spots.  Go out there and get it.  I’ll wait.  Just kidding.  I won’t.  For those of you who only read my LEGO posts, be sure to have a great Halloween.  Eat the candy, stop the museum curator from dressing up as a mummy and stay safe.  Let’s meet back here next week eh?  Say Friday?  It’s a date.