“Oh…it’s YOU! It’s been a long time. How have you been? I’ve been REALLY busy being dead. You know, after you MURDERED ME?”

Portal and Portal 2 stand as two of my favorite video games of all time. They combine perfectly intricate puzzles with a deeply sinister world and a hilarious villain and story to create something that no other game quite does. Trapped as a test subject in the Aperture Science Enrichment Center, Chell (You) must complete tests built by the evil robot controlling the facility, GLaDOS, in order to escape. With a handy dandy portal gun, the help of a slightly moronic robot, Wheatley, and the promise of escape, you set out on your mission to leave the facility and defeat GLaDOS once and for all. But before we can do that, we better find out just where this lovely series got its starting point.

Back in 2005, one of the developers at the already well established video game software company Valve, was walking the floor at the annual career fair at DigiPen Institute of Technology when he happened upon a little freeware game called “Narbacular Drop.” The game was fairly similar to what we see in the first Portal game, essentially a series of increasingly difficult puzzles using the portal device to create two portals in different parts of a room and progress through the room through the portals themselves. Robin Walker, the developer from Valve liked the project quite a bit. So much so that he later contacted the team with advice and notes on how it could be even better. He offered to show the game at Valve Studios. The team showed the game and were all hired on the spot by Valve president Gabe Newall. Work on what would soon become Portal began quickly after.

Portal was one of our first two packs that we purchased for the game. I like it THAT much!

Narbacular Drop had in common with Portal the fact that the two portals were colored orange and blue. Then again, it also took place in a medieval setting and the goal was, as a princess, to escape a dungeon. This was dropped when development began at valve and replaced with aperture science which I’m sure we’re all thankful for. The game took two years and and four months to create from the time of Valve’s purchasing and was created by a team of only ten people. Pretty impressive if I do say so myself. To save money, the team worked with writer Marc Laidlaw to incorporate the world of Portal into the already existing Valve franchise “Half-Life 2”

Early in the writing process, an AI system which would have funny lines was added to the story. This worked well with the arc of the game and eventually lead to the creation of the most iconic character from the game, GLaDOS, a crazed AI who has taken over the facility and forces her subjects to run tests. Early on in development, the team tried to figure out what sort of philosophy the game would impart. What could be so wonderful that our main character would go through countless tests to get to it. For fifteen minutes, there was silence in the room until someone broke the silence to say “People like cake.” So it is that the promised prize at the end of these tests is in fact, cake. There is of course, not cake. The cake is a lie.

In 2011, the sequel, which seems to be the source of much of the material in Lego Dimensions comes from, Portal 2 was released. Portal 2 was a much longer game with more mechanics and more puzzles and a much more intricate storyline. Not only must the player go to war with GLaDOS once more, but now there was a talking robot named Wheatley who was less than helpful and the over heard voice of Cave Johnson, the creator of the Aperture Science. I won’t go into too much detail of the story as that would ruin all the fun and you really owe it to yourself to play it BUT, I think this is a good time to reveal some of my favorite lines from the film. Those who haven’t played it before beware, this game is filled with sardonic hateful dialogue and not as much cake as one would hope.

“Unbelievable. You [subject name here] must be the pride of [subject hometown here]!”

“Well done, android. The Enrichment Center once again reminds you that Android Hell is a real place where you will be sent at the first sign of defiance.”

“Oh, you survived. That’s interesting. I guess I should have factored in your weight.”

“Well done. Here come the test results: “You are a horrible person.” That’s what it says. We weren’t even testing for that.”

“I honestly, truly didn’t think you’d fall for that trap. In fact, I designed a much more elaborate trap further ahead for when you got through with this easy one. If I’d known you’d let yourself get captured this easily, I’d have dangled a turkey leg on a rope from the ceiling.”

Aw, GLaDOS, you always know how to get me. Now, about these Lego pieces. The base set is incredibly cute. From the turret to the companion cube, it all just shines and feels exciting to hold and touch and build. 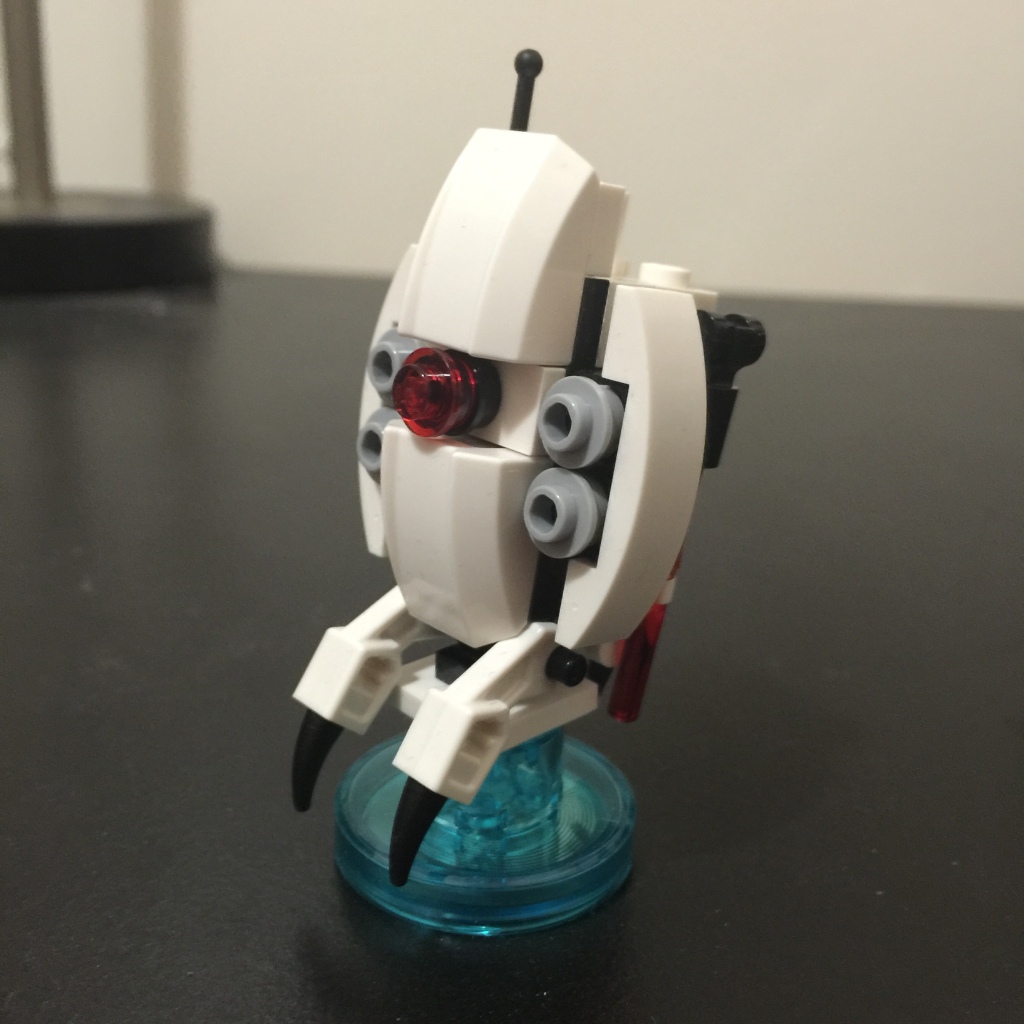 Okay okay, pretty much right out of the game. I like where we’re going here.

Things start to get weird when we go to the next level. The turret becomes this crazy running, gunning monster machine and the cube…gets shields? It’s a bit odd but I really like the look of the turret at this stage.

Umm, okay, that is less than cute. I’m a bit scared actually.

Then there’s the next stage which turns the turret into OH MY GOD WHAT IS THAT?

No but seriously what is that? I can’t even. In game it’s a jet pack? Kind of? Sort of? It looks as though it’s fallen and can’t get up. I literally had to look at the instructions three times to understand that no, it’s not upside down. That’s just how it looks. The companion cube is also a bit, well…

I forgot how to companion cube properly.

I’m not really sure how much you can really do with a companion cube but at least it gets some neat abilities and follows you around in game. That’s cute right? 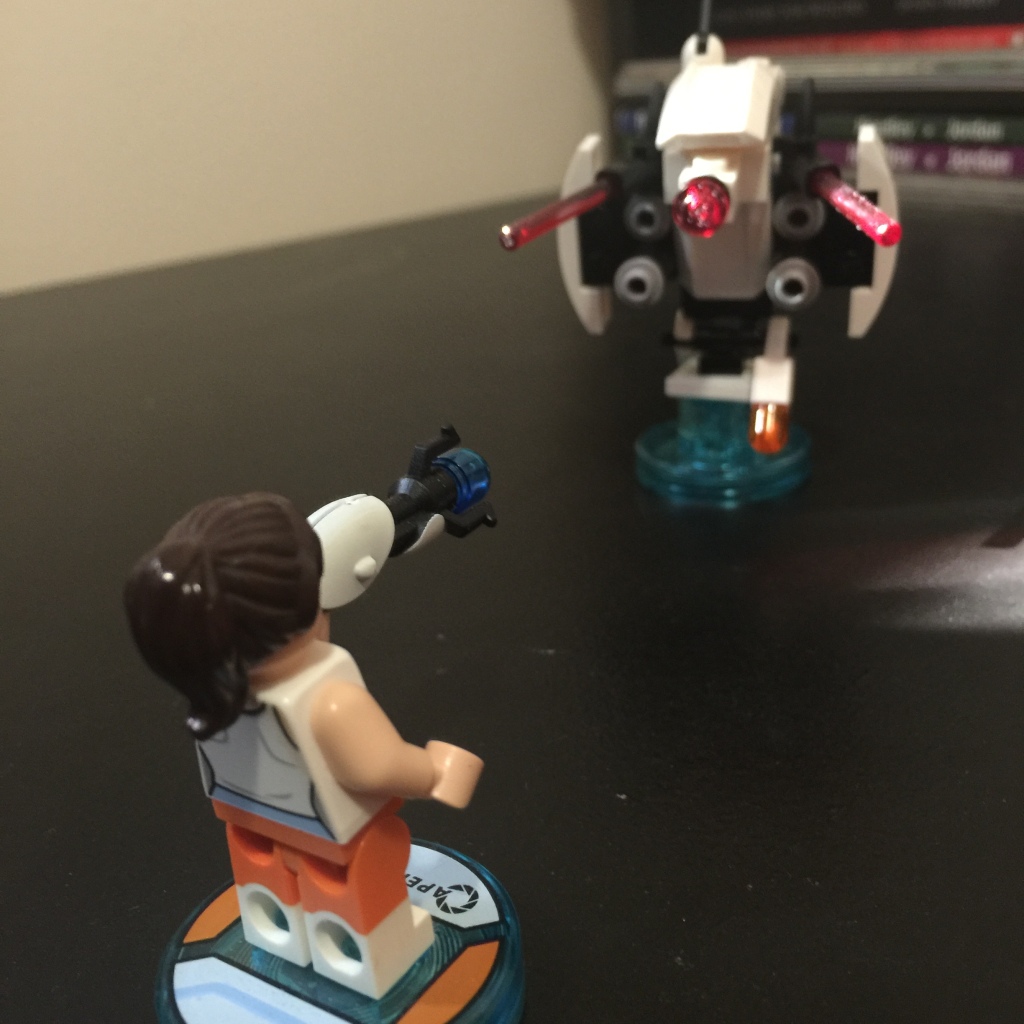 This scene brought to you by Pacific Rim 2, the search for more bricks.

In game, you’ll fight GLaDOS and jump through portals while dealing with other fun mechanics of the original game and I have to say that the puzzles in these levels were some of my favorites by far as they really did force me to think in a very Portal like way. The best part about the Portal pack is that you get a characters, a cool turret, a trusty companion cube AND a level pack all in one. No extra bells or whistles needed. Plus, who doesn’t want an itty bitty portal gun? What’s that? You in the back, you say you don’t? Yes, you can leave. Goodbye now. Get out! 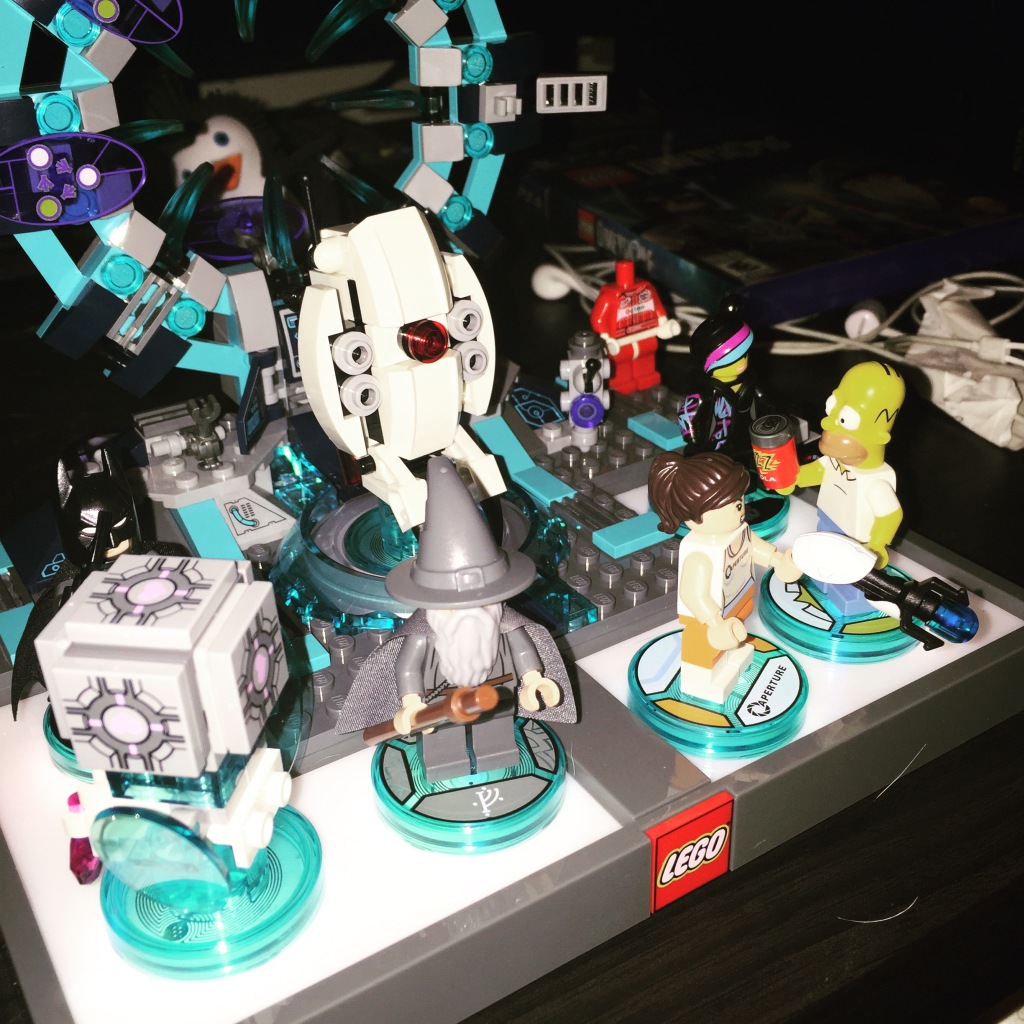 And so the family grows.