Hello all and welcome back to The LEGO Dimensions. This week I was supposed to research and report back to you about the thrilling history of Jurassic World. But it seems that last week did me in and I’m on a bit of a rest break this week. Oh, if only there were something less work intensive I could write about that would still hold your interest and…what’s that you say? Wave 2 of the characters from LEGO Dimensions came out this week? And you say I bought all of them and should take countless pictures and share them with you? Wow, I must say, you are really quite thoughtful. Without further ado, let’s take a closer look at Wave 2.

Wave 2 is much lighter than Wave 1 and my wallet greatly appreciates it.  Let’s start with my favorite new character, UniKitty. 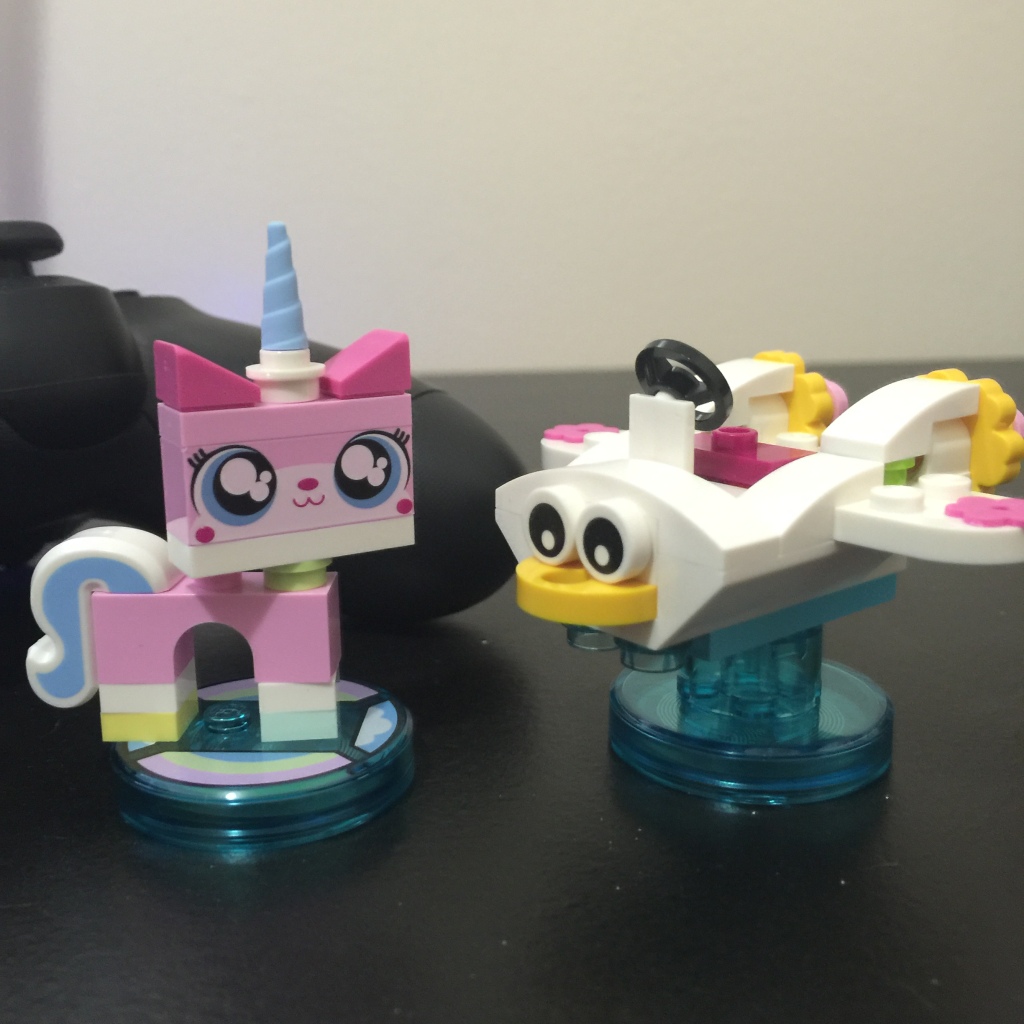 UniKitty has a duck car soooo pretty much she just won the game.

UniKitty comes to us from The LEGO Movie and she’s cute as a button.  Her powers include going into a rage mode where she fights and becomes enormous and red with anger.  More importantly than that though, when she jumps, she creates a rainbow behind her and a sparkling noise plays.  I don’t really care what powers she has.  She’s already the best.

At LEGO, they put your Lion Hero inside a Lion Car so you can Lion while you Lion. Lion?

Laval is technically part of Wave 1, but was exclusive to Toys R’ Us, and if you’re anything like me, the gated windows and mucus filled children scare you away from that store so I waited for the official release.  Laval rounds out the Chima characters and has a pretty snazzy sword, chi powers and a lion car.  A.  Lion.  Car.  On a side note, I really like the Chima and Ninjago characters as they have this really flashy look to them. 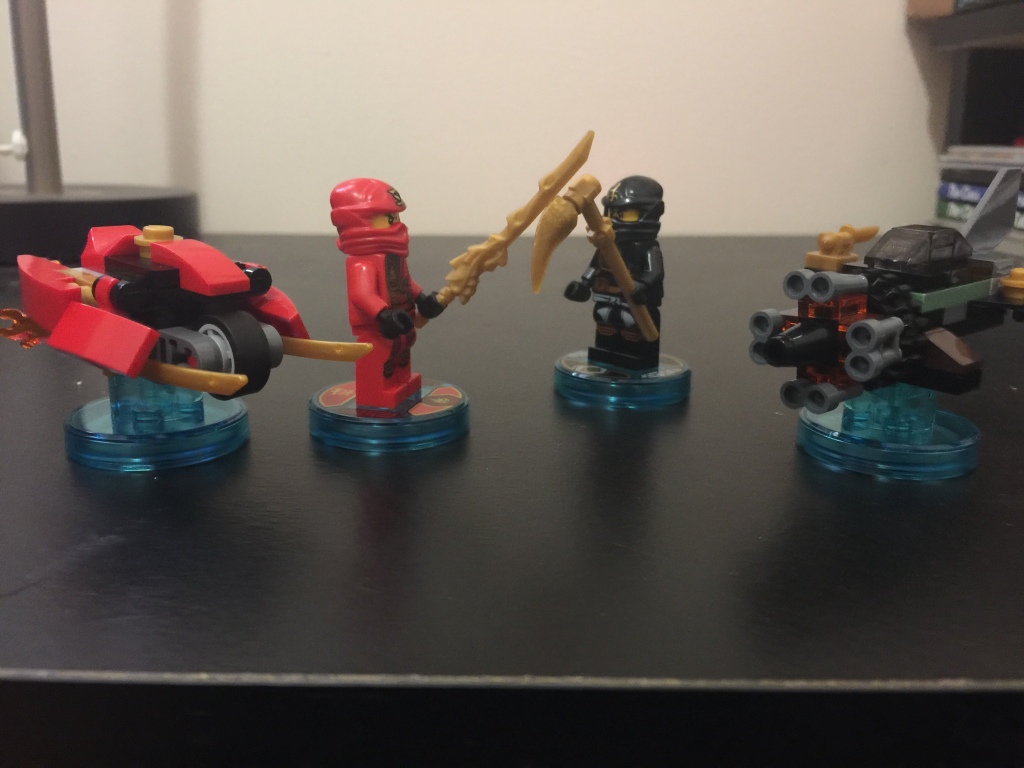 Kai and Cole released as well but more importantly, we have our first team pack that comes with TWO legitimate vehicles.  No silly cubes or sandwiches or gyrospheres, these vehicles are awesome and fun to drive.  Also Kai’s sword swinging is fun and fast and furious.  These two also have incredibly cool weapons.

Cowabunga dude! Eat my shorts! Why is my car falling apart?

Bart Simpson is here!  Why is his car so…raggedy?  Why does his character not speak?  I think this is probably the dud of Wave 2 for me.  The figure is cool but beyond that I’m unimpressed so far.  However, my Simpsons article will have me upgrading his vehicle and getting more in depth with the character so you never know, maybe I’ll change my tune.

The cake may be a lie, but Krusty’s got pie!

Krusty’s bike is pretty neat with a fun cartoon smoke effect.  My favorite thing about Krusty is that I now have the power of water without having to get out the Mystery Machine.  One thing about upgrading vehicles is that they get fast and often times, they go so fast that they are actually safety hazards.  Such is the case of the Mystery Machine.  Also, Krusty has a lot of funny jokes and quips with the other characters.  Congratulations clown, you may stay.

Last but not least, the doctor is in the house!!! er…Tardis…

The big release of this Wave is of course, The Doctor, complete with K-9 and Tardis.  This is exciting because he opens up a new Dimension and a new level which I’m happy to say is full of time and space travelling and literally tons of fun Easter eggs for the fans.  The Tardis can fly and stealth and you can go inside to fly to other universes and time periods.  It is done very well.  There is even a LEGO-ized Doctor Who opening that is similar to the show and will delight anyone who loves The Doctor.

Bigger on the INSIDE!! Not on top! Get down from there! 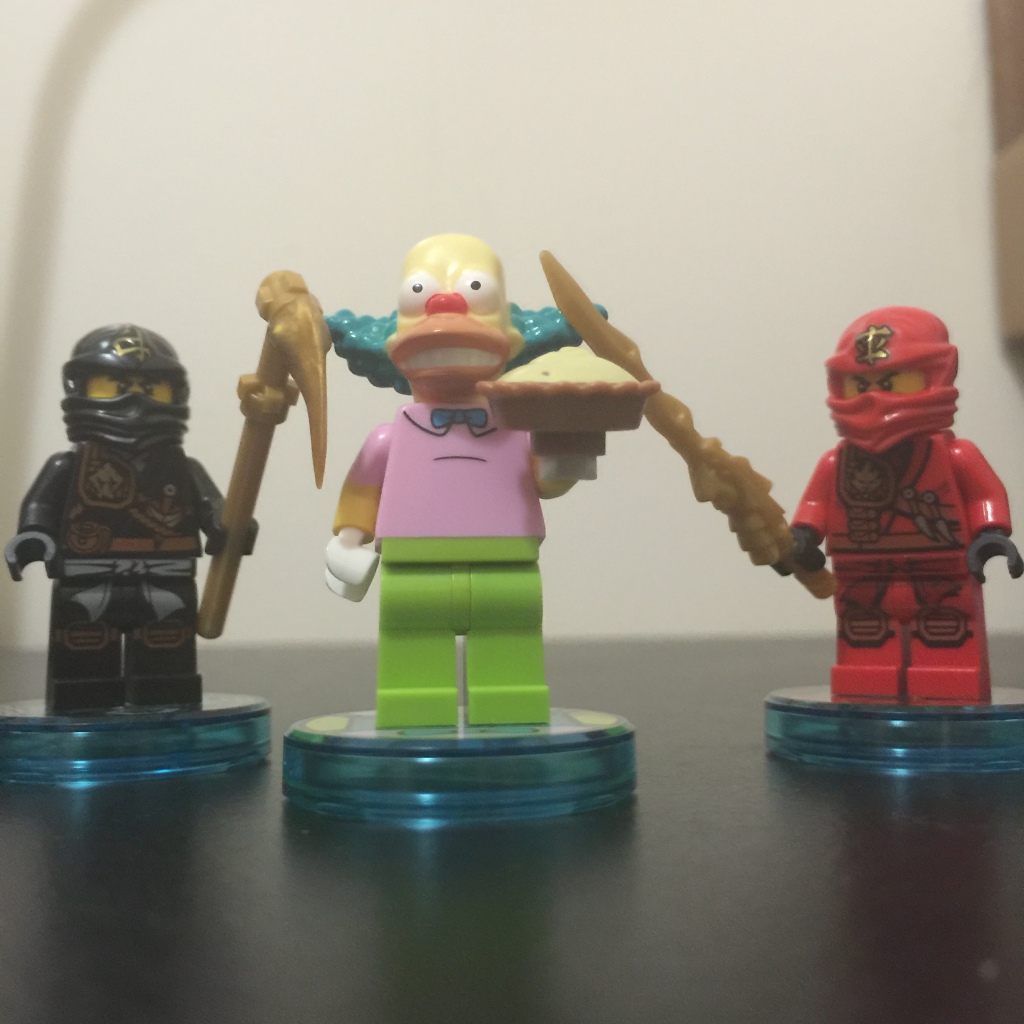 Just look forward and don’t throw that pie and no one has to get hurt. Now walk clown!

Feeding time for the pets.

The collection so far.

Thanks for stopping by.  Next week I promise some Jurassicy goodness!