A couple of days ago I wrote about the newest Disney Mobile game to hit the app store, Club Penguin Island.  I noted that while it was plagued with a very rough launch day and more bugs than a swamp, it was actually quite fun to play!  As it turns out, I have continued playing the game and I am really enjoying it.  It might be the fact that I can customize costumes, or the fact that I like collecting things for money.  It might be my insatiable thirst for penguin themed games.  In any case, I find myself checking in on Club Penguin Island fairly often throughout the day.  So I thought, hey, why not share my adventures with you fine folk here on the blog.  Without further ado, let’s take a dive and see what I’ve been up to in this chilly yet tropical paradise. 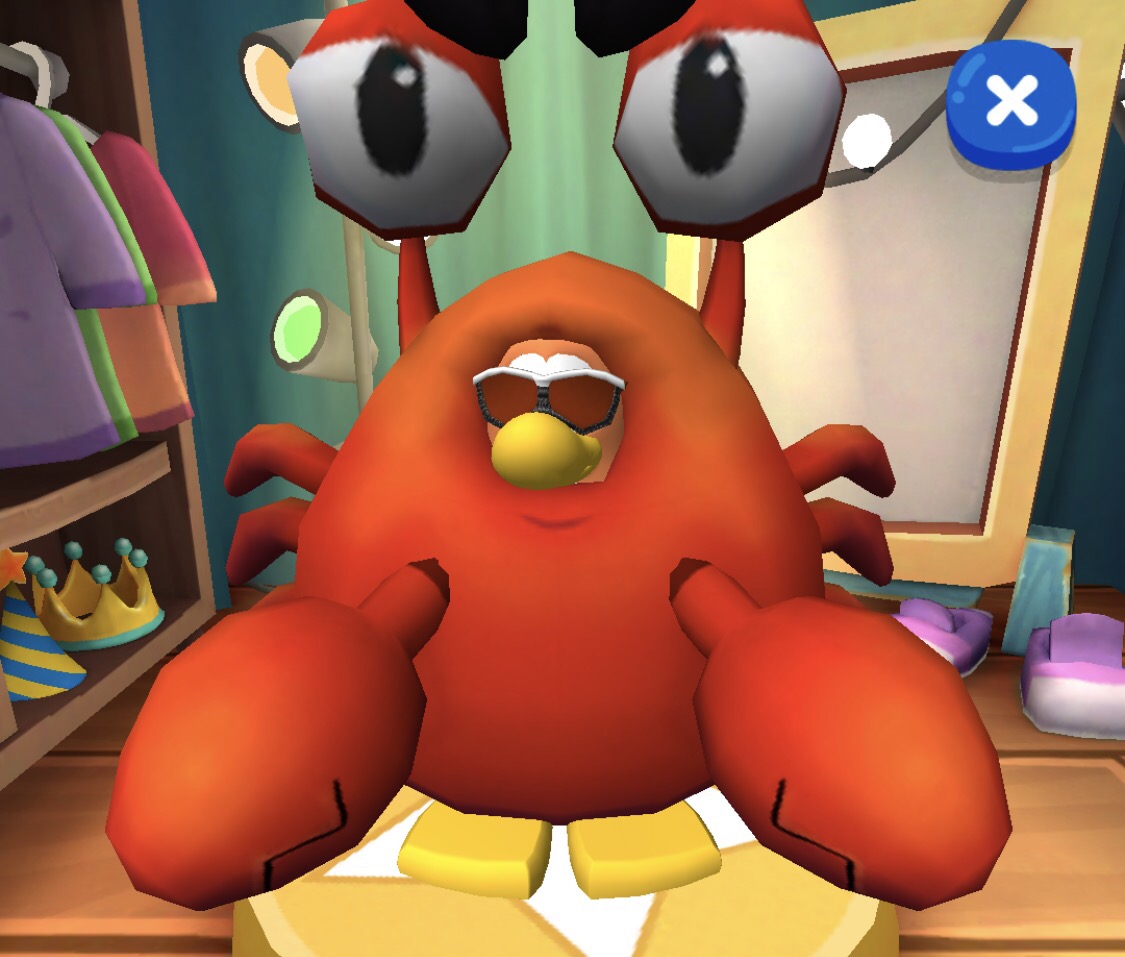 Club Penguin Island is very much worth checking into every day.  This is because certain quests only unlock 24 hours after the prior quest.  I find myself checking often in hopes of the countdown clock glitching so that I can continue my story.  For now, only two character have allowed me to complete quests, Captain Rockhopper and Aunt Arctic.  Rockhopper’s quests mostly involve solving puzzles around the island as I do the leg work to help him search out buried treasure left by the pirates of yesteryear.

These also usually involve scoping out the surroundings and then doing certain task in order to get the prizes to reveal themselves.  Today, I found myself shooting off rockets and blurting out emojis in order to get the island itself to reveal its secrets.  Of course, this all lead to the revelation of an ancient curse spewing forth from the lighthouse the way my mother spews curse words at me when she’s in the passenger’s seat while I’m driving.  We get it Mom, I follow to closely.  Calm it on down. This curse caused the practice dummies to come to life and attack the ship.  Luckily for Rockhopper, I am quite skilled in the art of pressing buttons to swing digital swords.  Thank You Zelda for giving me these skills.

Rockhopper also taught me to fish which is a fun pass time that involves making some quick coinage while pulling these sleep deprived squid out of the ocean.  Seriously, someone get this guy a coffee.

Rockhopper left me with a mystery, a necklace which we will hopefully find out more about tomorrow.  I can only imagine what shenanigans we’ll get into with that thing. 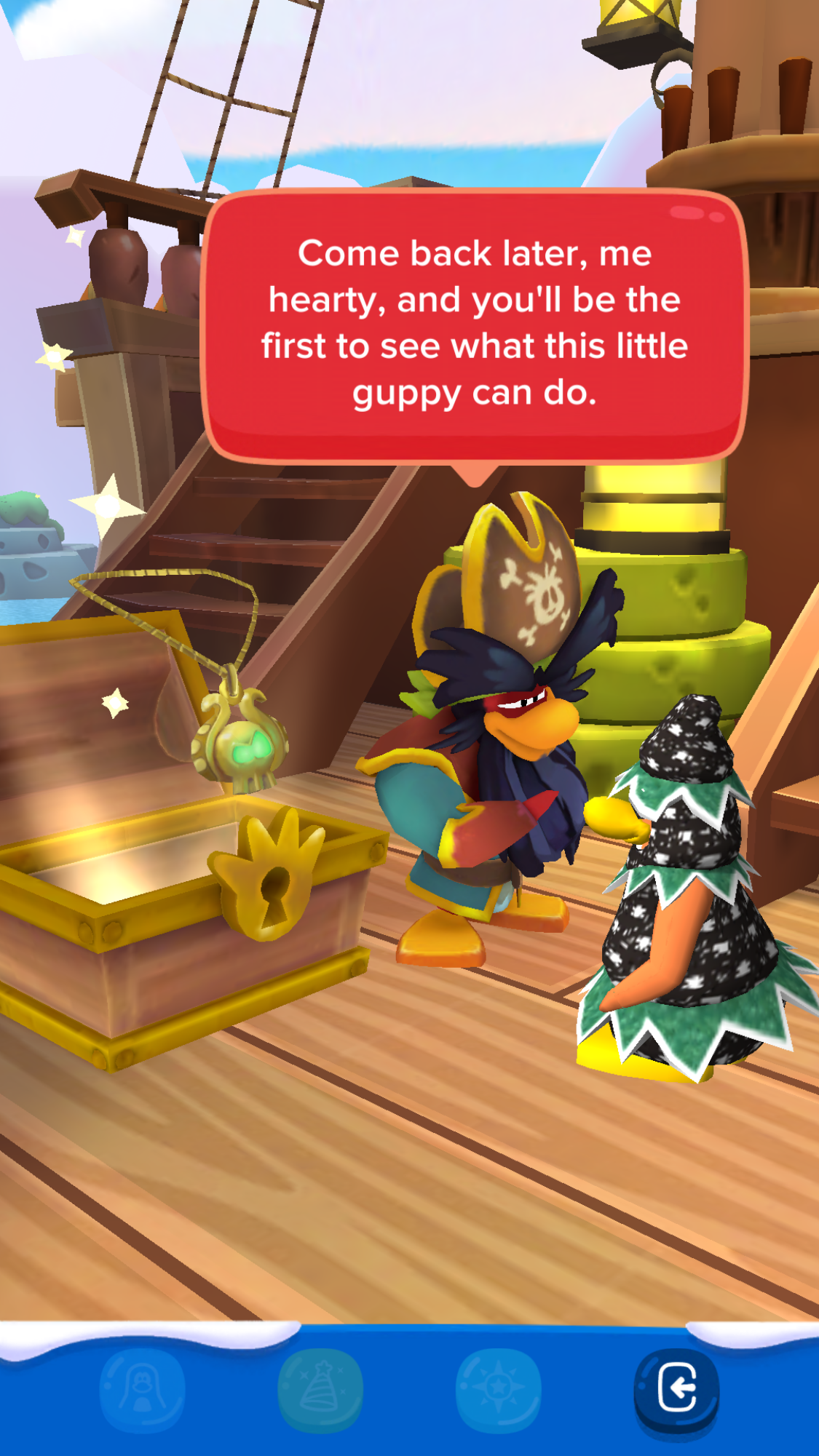 Meanwhile, Aunt Arctic has had me fixing up a lighthouse, which was initially frozen over.  In order to do this, I had to agitate the volcano in order to get lava, which is apparently an essential ingredient in hot sauce on Club Penguin Island.  Remind me to order the Mild chicken wings.

Of course I couldn’t go collecting lava without the proper equipment, a jazzy suit which apparently makes me immune to melting.  Not to mention my sunglasses which make me immune to being anything but totally awesome.  Ohhhh yeah!

Seriously though, this lighthouse is like a summer project that just keeps devouring my time.  Once melted and opened, a process which involved finding the key, I was asked to find new glass for the broken innards.  I was able to fish up some of this, but the rest had been stolen by crabs. Being that I am basically James Bond, I decided to infiltrate the crabs, sneak into their lair and take back the glass.  Pro level sneakery right here.

My adventure in the main quest will continue tomorrow, but for now I find that I have been pleasantly engaged in the often hilarious antics my penguin is asked to get into.

The Daily Quests and Community challenges you’ll see if you click the little compass at the upper left of the screen are quite important.  These allow you to gain experience, which is needed to level up and unlock more of the story.  These things are usually fairly easy but quickly require you to really learn the lay of the land, or should I say, the lay of the Island.  Today I was asked to participate in a race underwater as well as bounce in the central trampoline several times.

My favorite quests, though, are the community quests in which you are often asked to do ridiculous things with the entire community in order to unlock the quest for the day.  For example, today I was asked to get five penguins in tree costumes onto a single hill in the cove.  While this was purely ridiculous, it was a great reason to finally talk with my fellow penguins and we all had a good laugh.  In any case, make sure you are completing every quest possible.  Experience is a rare commodity in this game and you don’t want to miss a single point of it!

I have been having a blast in Club Penguin Island.  It’s adorable and the quests are actually fairly engaging.  While I know many are still mourning the loss of the Club Penguin, I really hope this game gets a following and more people start giving it a try.  Let me know how your first week in the game is going in the comments!

Read More of My Thoughts on Club Penguin Island