The Tale of How We Got Engaged at Disney World

Many of our friends have asked about this story and since its been a while since I did a personal story on my blog and ALSO because my blog has been very Disney-fied lately, I feel that this tale deserves, nay, begs to be here. Enjoy!

A few months ago, I remember sitting across from my partner, Carl Li, and thinking, “Wow, I really love this person. ‘Boyfriend’ doesn’t even begin to explain how I feel about this guy. If only there were a better, more meaningful term. I could easily spend the rest of my life with this person.” Thus began a series of quite frantic internal monologues. I’ll spare you the inner discussions as they were mostly in my head and might seem a bit crazy if put on paper. I’ll just skip to the end. After putting a lot of thought into it, I decided that I would propose to him.

This car ride at Disney seems a good metaphor for our relationship…just kidding…sort of.

I originally planned to do this later in the year, but his Birthday was approaching in July and I had discussed with his sister the potential for surprising him with a trip to see her and her husband in Florida, where I had never been before. It all seemed perfect. I changed my original plan and decided that this trip would be when IT would happen. Go big or go home, right? I did some research on precious metals and before long, found a ring that I fell in love with, Koa wood inlaid into tungsten and meteorite. Meteorite you guys! Actually the original ring I chose was Meteorite and Dinosaur Bone but apparently the ring, while gorgeous, was prone to falling apart so I decided against it. I ordered said ring and went to work on the trip itself. 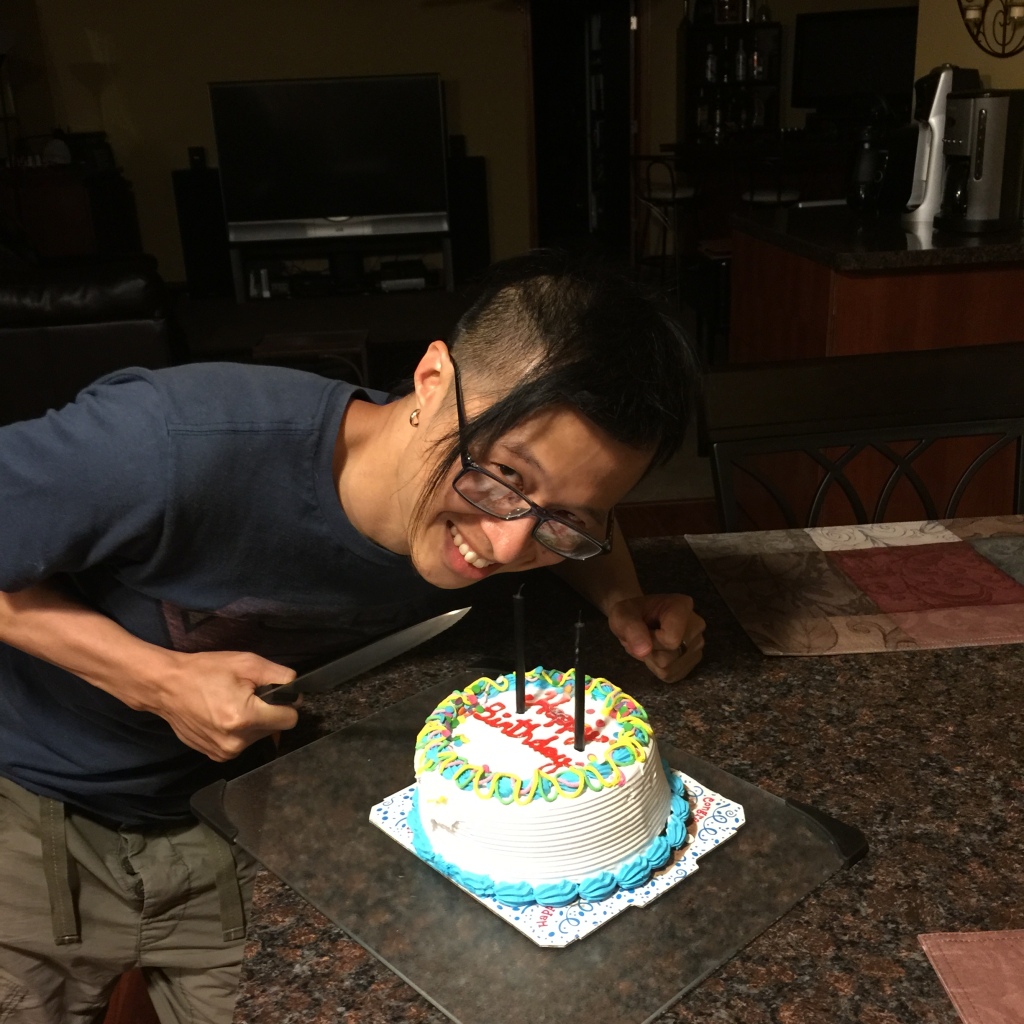 Birthday’s are a time to celebrate in more ways than one.

We’d be gone from July 9 to the 15th and Carl wouldn’t know about it until the day of or a day before. I ordered our plane tickets and got excited. After all, Orlando was the home to Disney World and Universal Studios, both of which I had never in my life been to.

I remember showing my mom the ring. She was visiting for a week in May and I thought, if I’m going to tell her about this, I ought to do it in person. It’s only right.

“So I ordered this ring,” I said, and then showed her a picture of it on my phone, as it had not yet arrived. “It’s for Carl. I’m going to give it to him during our trip to Florida.”

“That’s nice,” my Mom replied and went back to popping panda’s on her phone. I got the intense feeling that the point had been lost on my mother. I decided to try again later.

The next day, while on the subway, my mom turned to me and said, “So does this mean I’m going to have to deal with him for the rest of my life?” Sarcasm runs deep in my family.

To my surprise, she smiled and nodded. “I think I can live with that.” In so many words, my mother, who had lost her mind a little bit when I had come out of the closet at 18, had just given me her blessing to marry a guy. We were off to a good start. 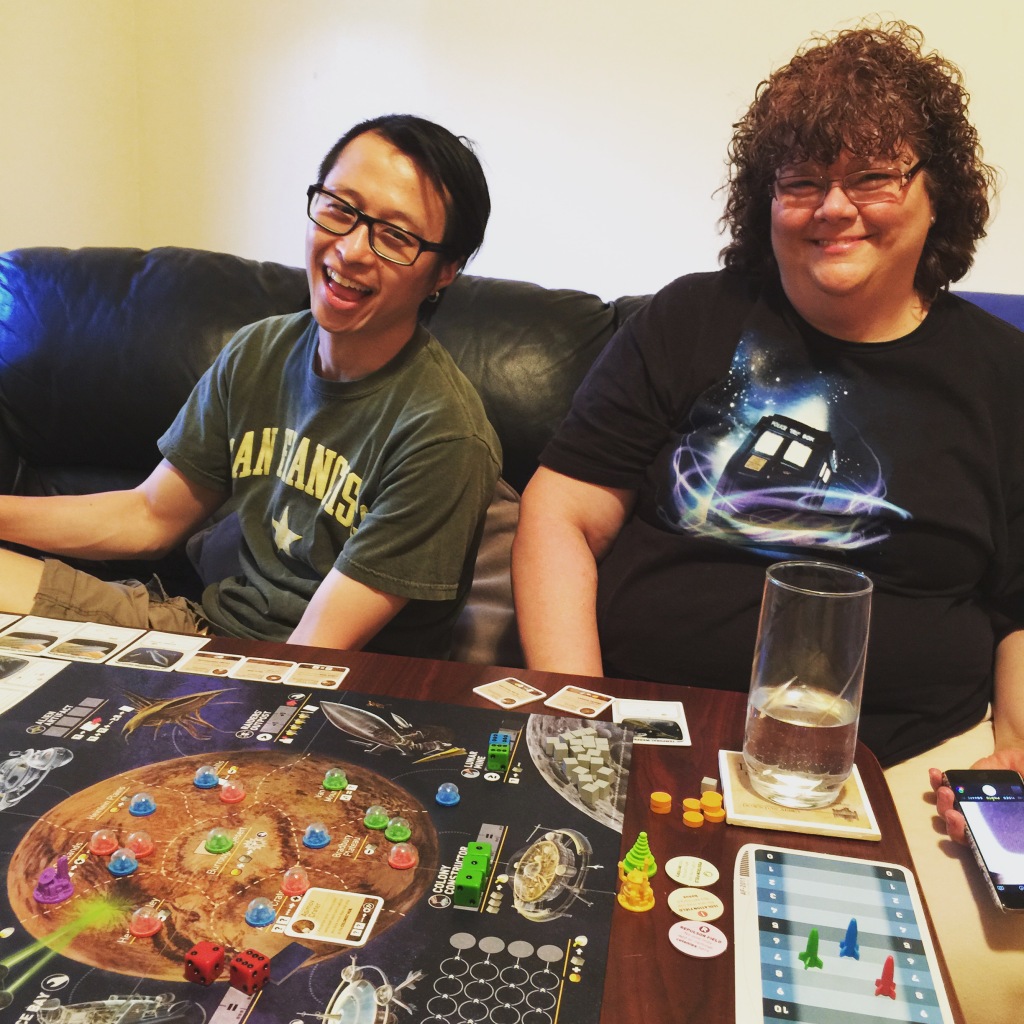 More bonding, this time over board games.

I polled several of our friends and decided that I would do the proposal at Disney. This was in opposition to his sister’s idea of doing it on a hot air balloon. A series of loose day dreams involving me falling over the edge of the balloon directly preceding or following the proposal led to this decision.  I chose life.

A week before the trip, Carl got a call about a possible gig. Here’s the thing that people who aren’t actors might not understand about acting. It’s a hard job and the thought of turning down work is absolutely awful and as an actor, you would never want to say no to work, and more importantly, getting paid. The trouble was that this gig would be happening July 10th, when we were supposed to be in Florida. Not knowing what I had planned, he went for the job, sending in a head shot and then auditioning. It is a truly awful thing, wishing that someone doesn’t get a job so that you can take them on a magical trip. Stressed by the thought of not knowing what would happen, we waited. The plan became that if he got the job we would cancel the trip and instead do something fun in the city for his birthday. Of course, if he didn’t get it, we would go.

Dating an actor is sort of like a roller coaster ride…of emotions!

After several grueling days of waiting, we finally got word that he was off the hook and while he was sad about not getting it, this was quickly reversed when he found out by way of me giving him the phone, telling him that it was the hotel needing to confirm his information, when it was actually his sister, that we were going to Florida for the weekend. We packed our bags and headed out. Crisis averted.

Landing in Florida, I met his sister and brother-in-law for the first time and we made our plan for the week. We would do two days at Universal Studios and one day at the Magic Kingdom. The trouble was that after our first day at Universal, we noticed that the forecast for the rest of our trip sighted heavy rain. Now I was sure that even though we had miraculously been able to make the trip, it would all get flooded down the drain.

My first view of the castle. Initial thoughts? IT WILL BE MINE!

With our fingers crossed, we headed out to the Magic Kingdom. This was my first trip to ANY Disney park and it was absolutely amazing. My eyes were wide at every turn and getting to see this place with Carl made it that much more special. We made the effort to do every ride possible, all the while with me having the ring in my pocket and waiting for the perfect moment. The problem was that I had planned to propose during the fireworks show that night. After all, how amazing would that be?

Carl plays a pre-proposal jam session, even though he doesn’t know it yet.

As night fell, after an absolutely perfect day with no rain whatsoever, we headed to the fireworks show. I unfortunately didn’t foresee two things that happen at Disney at this time. The first is that the park’s lights go out for the show. This means, that they chorale everyone into the center of the park to watch the show and won’t let you leave until it’s over. This led to problem #2. Apparently a lot more families stay to the end of the night show than I had initially planned. The place was packed to the brim. 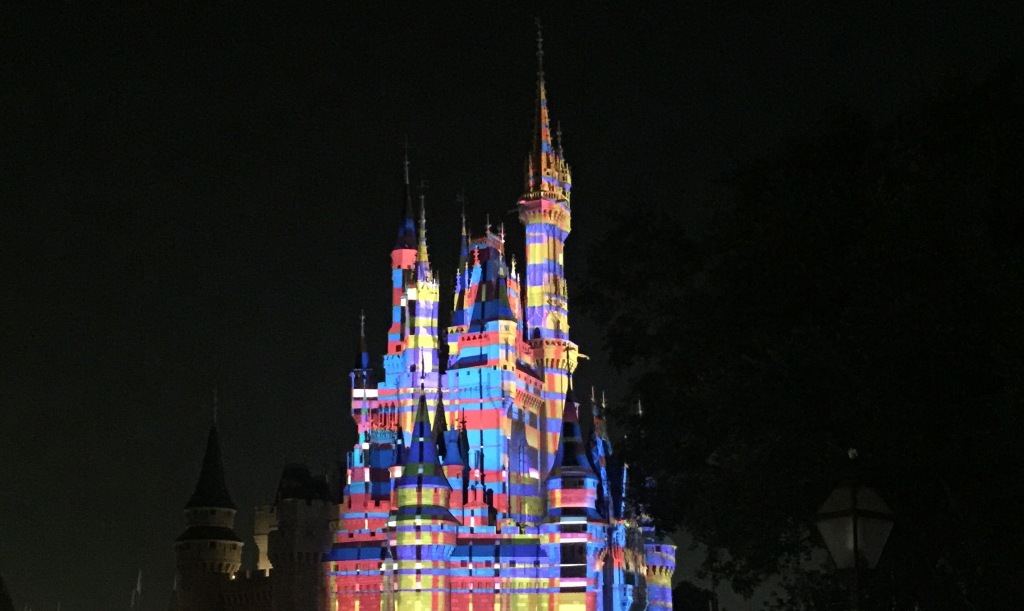 The fireworks show began, us clumped between a bunch of other human beings, and I realized this simply wasn’t going to work. I had to get Carl away from this gaggle of pedestrians.

“Let’s go see if we can get a better view!” I yelled, after Tinkerbell took to the sky and the show began. The trouble with being with someone who cares about you is that they want you to have the best experience possible. Carl was very aware that we already had a pretty perfect view, so the thought that I would leave it and then have a ‘less magical’ time did not sit well with him.

“Where are we going?” He asked.

“To get a better view. I think I saw a good place earlier.”

“It’s near Adventureland,” I lied.

We found our way to Adventureland to find that, no, the view was not better.

“What the @%$& are we doing?” He asked, getting upset that I wouldn’t just stop running around and enjoy the beautiful fireworks show.

Not wanting to upset him further and have the moments before I proposed fraught with tension, I gave up and we found our way back to the central area of the park in front of the castle, and finished watching the show.

All day, we’d been wanting to get on the Peter Pan ride, one of the few rides he had not been able to get on throughout the day. We headed in that direction and then I saw a spot that was better than any. On a near vacant street at the back of Adventureland, there was a lovely little street lamp lighting up a little spot beneath it. I pulled over to it and pulled out the ring….

But, in all the craziness of trying to get to this point, the nice things, and the build up and the speech I had prepared fell out of my head and I jumped straight to the down on one knee, asking the question part. He was confused and surprised to say the least. Being the blunt, no holds barred person that he is, he remarked on the fact that I had no build up. “You can’t just ask it, you have to tell a story,” he said. It should be noted that he did say yes, but I was ashamed of my poor form and demanded the ring back. I needed a redo.

We went to the Peter Pan ride and waited in line, both with big smiles on our faces. Finally a the front, we took off flying with Peter and co. and I told him what I had meant to say all along. I told him how he was the positivity in my life even when I was grumpy and didn’t want to talk to anyone. He was the strength and perseverance in my world, even when I wanted to throw in the towel and give up. He was the person who’s smile made even the crappiest day feel amazing. I said some other things too but they were just for him. Somewhere over London, with Big Ben and the moon lighting up our hands, I offered him the ring again and this time asked him to marry me with confidence. He, obviously, said yes.

Our last picture before leaving the park.

We still had a couple days in Orlando and there was plenty of fun to be had. We left New York, boyfriends, partners and best friends, and we returned the following Wednesday with one more title under our belts and a new obsession with Disney. While this visit was my first, I don’t think there’s any chance it will be my last. As the song that plays during the fireworks show claims, this place really is a magical place where you can “Make a wish and your dreams will come true.”

So do you have a crazy life changing Disney story? Tell me all about it and make sure to check back here weekly for new stories, board game reviews and updates on my Vault Disney project!  Thanks so much for reading and being a part of this amazing adventure!