Saying “I do” and Our Next Big Adventure – Life Update

We talk a LOT about games here on the site.  And movies.  Oh, and we talk about Disney.  Almost exclusively.  But today, I want to talk about some major life events that have occurred in the past couple of weeks.  In fact, some of what has happened has been a long time coming, but only now can I talk about it, which is really exciting, because I am not a great secret keeper.

If you’ve ever wondered who makes sure I go to sleep at night and don’t stay up collecting snowflake tokens, wonder no more.  My loving partner Carl has been a part of my life for the past three years, and a year and a half ago, while at our first trip to Disney World, I asked him to marry me.  Little did I know that this trip would be life changing in more ways than one.  If you’d like to read THAT story, you can check it out HERE.

We had planned to get married AT Disney next September, but after the election, we knew that things might change…and they might not.  It was hard to say, but we quickly took on a simple stance.  ‘Hope for the Best.  Plan for the Worst.’  It was from that decision that our wedding got moved up and we decided, back in November, that before the year was out, we would sign marriage papers.

All it was at first was a small get together of very close friends in the NYC area.  We planned to eat some dinner, sign the papers, and celebrate love.  Things quickly took a left turn as my mother revealed that she too wanted to be at the event.  Other friends also expressed to us that this was a much bigger deal than we were making it.  One week we were planning a dinner, the next a ceremony.  Before long we were adding guests, both family and friends and writing vows.  Our little dinner had become a full on wedding, albeit a small one, but either way, we were very excited.

My dream, since our engagement, had been a Disney World wedding, and with the realization that this was not going to happen, I set to work making our Wedding as Disney as it could be.  This was a lot easier than one might thing.  For starts, we revamped the officiant’s script, to make it more Disney.  This was a simple task as the Officiant was one of my dear friends, Jessie, who is also a Disney nut.  We also added readings into the ceremony that were Disney themed.  This was a great way to get our friends involved but also helped set the tone.

My amazing friend Carina, started the ceremony with this simple reading, which is similar to some posters out there.  I edited it to include some of our other favorites, along with Moana.

In this Family
We wish upon a star,
Whistle while we work,
Believe an elephant can fly,
Know the way to Never Land,
Look for the bare necessities
And when it’s time to find home, we know the way.
We let it go
because Hakuna Matata,
will always be our guide
To infinity and beyond.
We see the light,
And we just keep swimming.
So please, Be our guest,
Because Ohana means family
Laughter is timeless,
Imagination has no age
And the Dreams that you wish can come true. 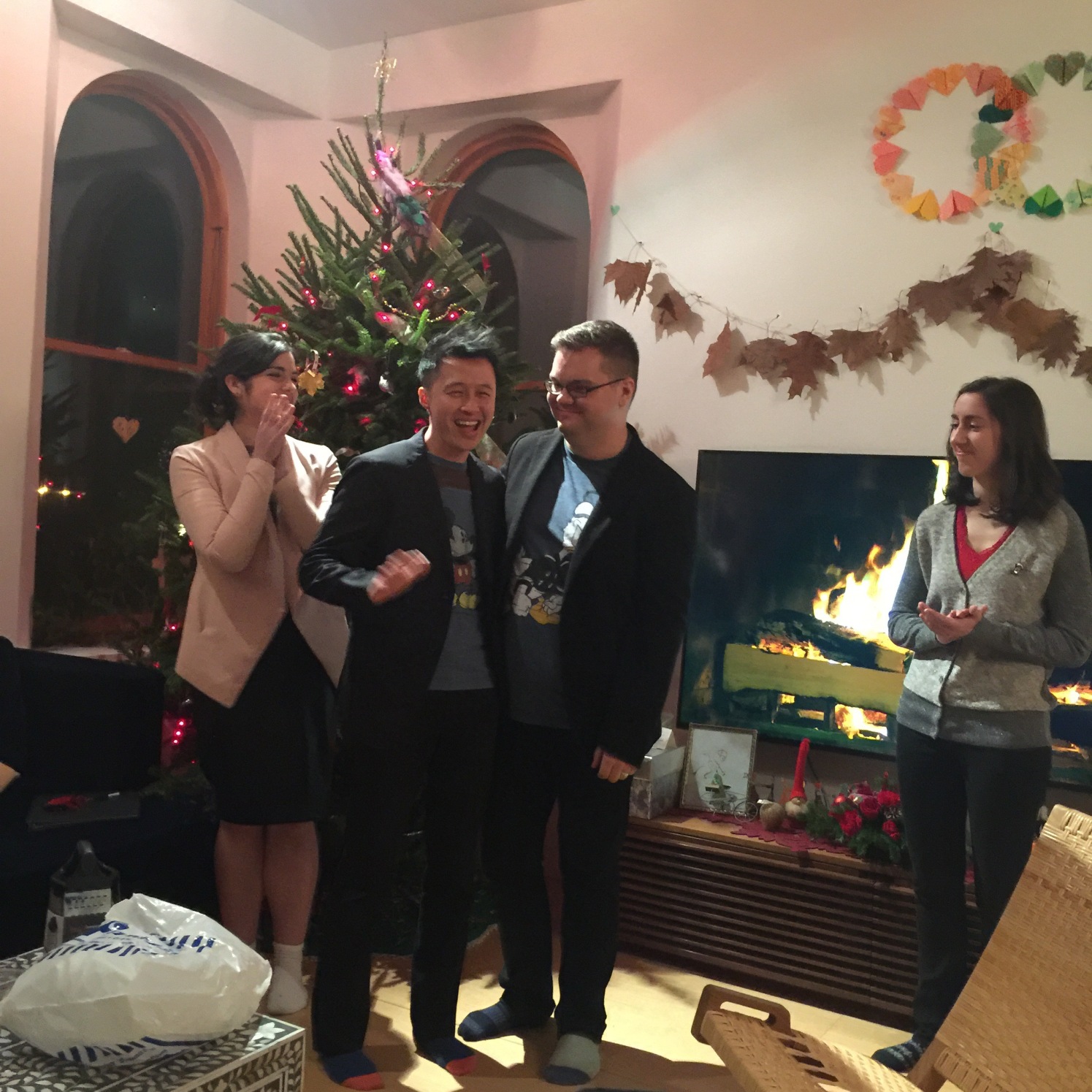 We also had a reading from Winnie the Pooh, read by Carl’s sister from another mister and all around amazing human being, Amy. I cut together Winnie the Pooh quotes that spoke to us, and since it is a movie that we both adore, this fit perfectly into the ceremony.  It was doubly amazing because our wedding rings were engraved with a Winnie the Pooh Quote: As soon as I saw you I knew an adventure was going to happen.

Christopher Robin poked Pooh Bear on the nose and said, “If ever there is tomorrow when we’re not together, there is something you must always remember.
You are braver than you believe, stronger than you seem, and smarter than you think.
But the most important thing is, even if we’re apart, I’ll always be with you.
If there ever comes a day when we can’t be together, keep me in your heart, I’ll stay there forever.”
“Pooh,” whispered Piglet.
“Yes Piglet?” replied Pooh.
“Nothing,” answered Piglet.  “I just wanted to be sure of you.  If you live to be a hundred, I want to live to be a hundred minus one day so I would never have to live without you.”
“I think we dream so we don’t have to be apart for long,” said Pooh.  “If we’re in each other’s dreams, we can be together all the time.”
“Pooh,” said Christopher Robin.  “Promise me you won’t forget about me, ever.  Not even when I’m a hundred.”
Pooh thought for a little.  “How old shall I be then?”
“Ninety-Nine.”
Pooh nodded.  “I promise,” he said.
“Sometimes the littlest things take up the most room in your heart,” said Pooh.  He thought a bit more.  Which was quite difficult as he was a bear of very little brain.  “Some people care too much.  I think it’s called love.”
“How do you spell love?” asked Piglet.
“You don’t spell it,” replied Pooh.  “You feel it.”

We finished up with a monologue from Zootopia, which I think perfectly captures the message that Carl and I always hope those who come into contact with us take away afterwards.  This one was done by one of Carl’s closest friends, Ronnie.

When I was a kid, I thought the world was this perfect place where everyone got along and anyone could be anything.
Turns out, real life is a little bit more complicated than a slogan on a bumper sticker.
Real life is messy.  We all have limitations.  We all make mistakes.  Which means we all have a lot in common.
And the more we try to understand one another, the more exceptional each of us will be.
But we all have to try.  So no matter what type of person you are, I implore you: Try.  Try to make the world a better place.  Look inside yourself and recognize that change starts with you.  It starts with me.  It starts with all of us. 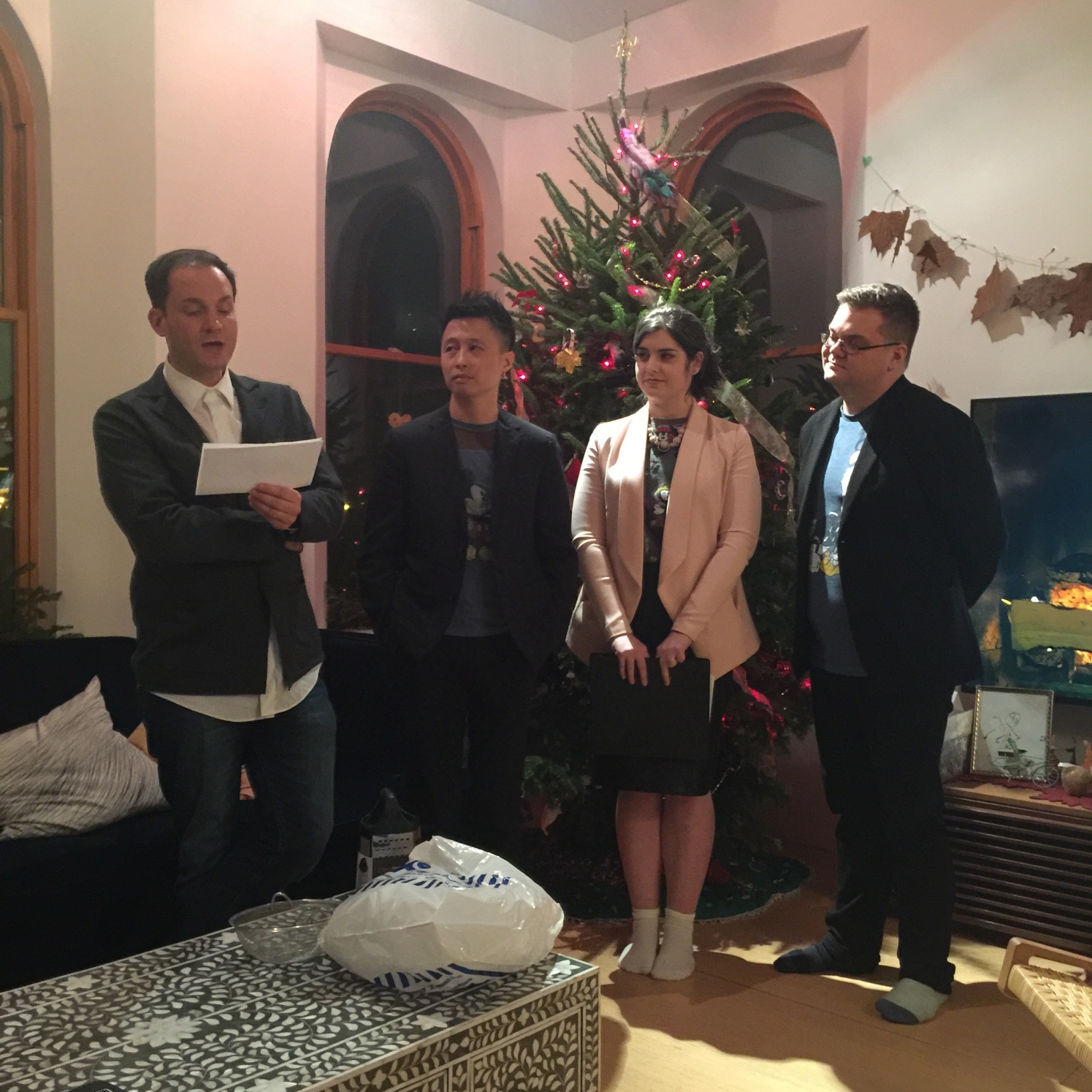 To top all of this off, we played Disney music before the ceremony, wore Disney themed outfits, and had a lovely Disney cake topper and centerpiece, provided by my Mother. 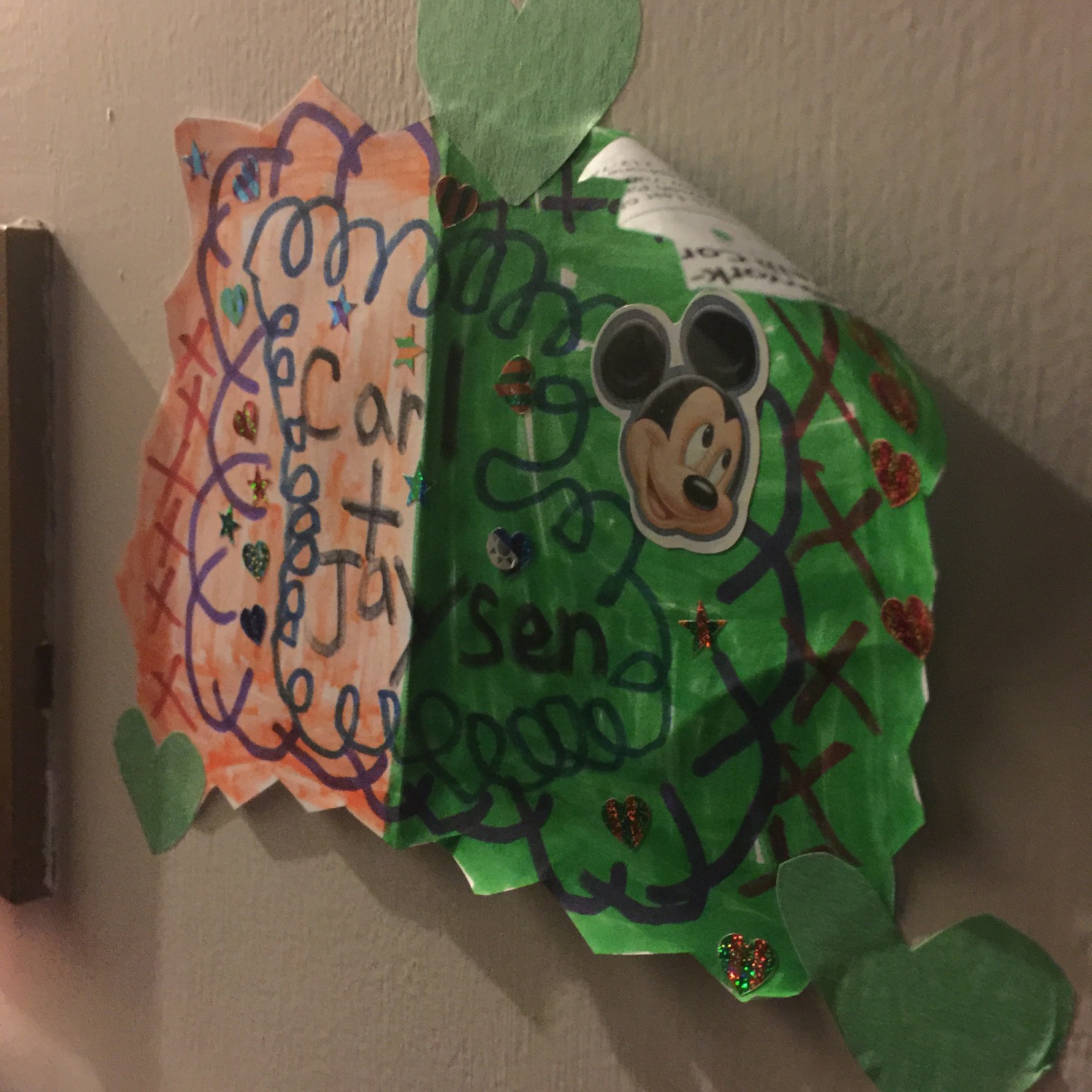 A Most Magical Night

For me, getting married has always seemed like this strange thing in my head.  I know a lot of people envision their wedding day since birth, but that has never been me.  I’ve always had a hard time seeing it in my head.  But, that being said, I can’t think of it being a more amazing night.  We had so many amazing people there with us.  We ate great food and Carl even got me to dance with him.  Now if that’s not magical, I don’t know what is. 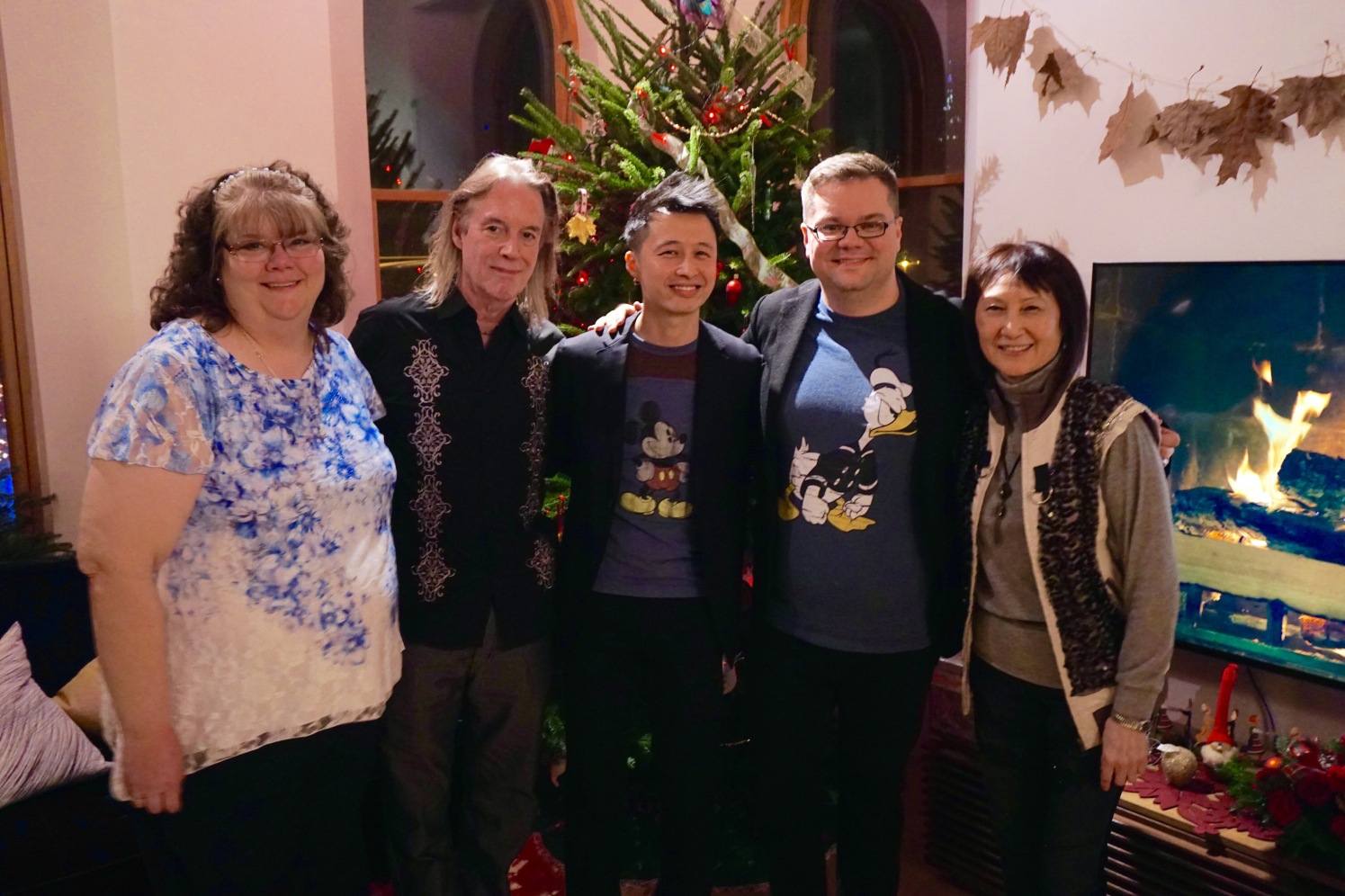 Our Next Big Adventure

And that leads me to the part that I’ve been holding in for MONTHS!!!  The reason I’ve not been able to post as much and the thing that has me so excited I wanted to burst.  Back in June, I got the heads up that my company was going to be opening a location in Disney Springs.  I jumped at the opportunity.  Now, months, interviews and big decisions later, I can happily announce that next month, Carl and I will be picking up shop and moving to Orlando!!!  We’ll be living a mere 10 minutes from Disney World!!!  For us, it means a big change, but it also means a dream come true.  I am so excited to live next to the place that inspired to start this blog and to be able to bring all of you even more amazing info, photos and blog posts about the parks themselves as they change and evolve over the coming years.

The past couple of months have been crazy, and the next couple look to be even more insane with a big move and a new start.  I’m confident that we can do it and I’m so excited to see what’s next for us!  Some folks on Facebook and Twitter also heard that we are doing a Honeyfund to help pay for our new ride in Florida, since we’ll be needing a car.  After all, we New Yorkers and not really about that driving business.  Rather than doing a Honeymoon, since we’ll already be living near the most magical place on Earth, we decided to raise the money needed to get us there every day! Oh, I’ll also need a car to get to work I guess…  Anyway, if you feel like throwing a little wedding gift our way, go for it! 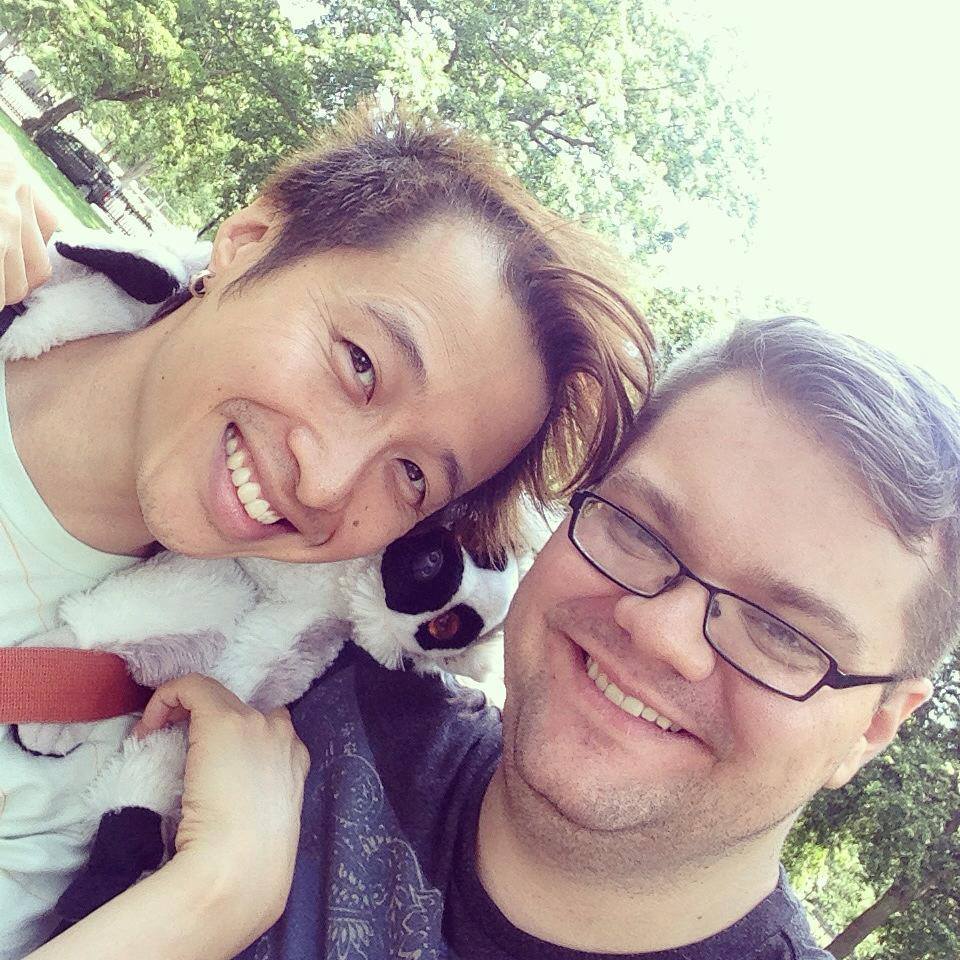 I look forward to sharing this amazing journey with all of you by posting updates on everything from our new home to our first trip to Disney as Florida residents!  If you live in the area, drop us a line.  We are pretty cool, and we love to play board games.  We also love watching movies, going for long walks on the beach and eating Thai food!