Clipboard Man and the Ceiling Chair

I have never considered myself a partier by any stretch of the imagination.  Even when I was younger, when my friends were going out on a Saturday night, I was usually working…or asleep.  I really can’t stress just how important sleep is in my life.  Why do I dislike going out?  I’m not really sure.  I never had a mortifying experience which would have prematurely made me hate the idea of going out to a place where loud music is played and drinks are far too expensive.

Since meeting Carl, however, I have tried to face my anxieties head on and not be so afraid of new things.  That is why, when he asked if I wanted to go to a movie screening and then an after party at a night club, I clenched my fists, held my breath and agreed.

The movie was a Chinese film about prostitutes entitled ‘Chickensss.’ 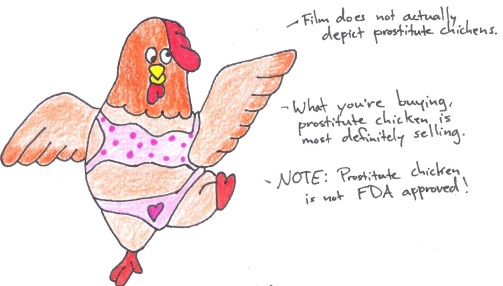 It was the third in a line of films and was a comedy because what’s funnier than Chinese street workers?  Afterwards, we met up with Carl’s friends Olive and John.  They were a couple who reinvented cool couples.  John was the lead guitarist of the band Late Cambrian, and Olive played the piano and sang backup.  He wore red sneakers and had tall hair while she was the very essence of stylish, having long hair which was split so that it was blond on one side and black on the other.  We also met up with their friend Ivy, who had been kind enough to get us the tickets.

We headed over to the night club, which was housed at the top of a high end hotel.  We were under the impression that the party was an exclusive event just for those who had attended the movie, but when we got there, we found that we were to be going to the same night club as a handful of crazed, barely twenty-one men and women, who were waiting in a long line outside the hotel to get in.  They were all dressed up and ready for a night out.  The guys wore slacks and blazers.  The ladies wore dresses so tight that nothing was left to the imagination.  In fact, you’d have to forcefully shove the images from your mind to not imagine them.  We were wearing hoodies, sneakers and jeans.  The sad part, was that we were the ones who stood out most. 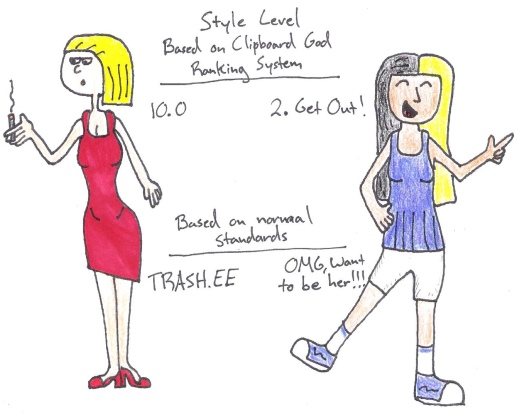 We were asked to wait in line and after much disagreement, we did just that.  Upon reaching the front of the line, we informed them of our reasons for being there.  It felt a bit like trying to convince the gatekeeper at Oz that we indeed there to see the wizard, and he was indeed expecting us.  The gatekeeper, a smarmy little twenty-something, was wearing white jeans and sneakers (The same brand and make as John’s only a different color) and held a clipboard which I imagine gave him magical powers, because he acted as though he were a God of some sort.

“You all are underdressed,” he exclaimed.  I’d like to point out that if we had been going to a Gay club, one might have considered us overdressed.

“We just want to go up and say hi to the people from the film association,” we said.  Keep in mind, these were people we had just moments ago been talking to while still at the screening venue and they had not been dressed any differently than us.

“I can’t do his shoes,” he pointed at John’s shoes.

“One second.”  What happened next was an Upper West Side tribunal of sorts.  He pulled over three more equally unimportant self entitled friends and pointed at John’s shoes.  A tall hulking man came over to us.

“Here’s what I’m gonna do for you guys,” he said, as though we were being cut a deal.  “I’m gonna let you in, but he’s gotta pay cover with those shoes.”

Needless to say, this was the last straw.  We had no intention of paying for a free party because one of our party members was wearing what had been deemed poor footwear.  John got out of line and we followed.  This is where I would have called it a night, but John and Olive were cool.  On a night where I would have written until my eyes bled and then cried on the floor while Carl tried to calm me down, Olive and John were ready for the adventure to begin. 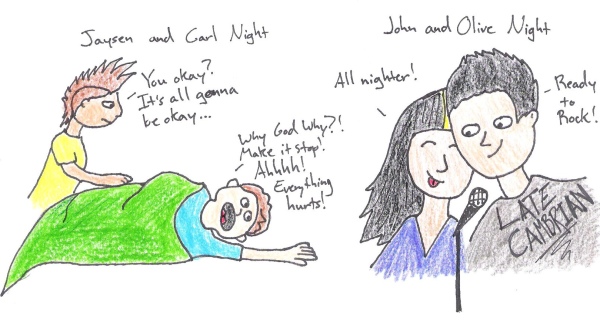 Olive led us to another party, this time it was for a friend who had just turned a year older.  The place we were now at was set up so that there were three different clubs in one building.  We went to stand in line for the club we thought was the right one.  The line was separated into boys and girls, which I found odd but one of the men in line was wearing flip flops so I felt we were in a better place this time.

“Run!” screamed a girl from within the club we were waiting to enter.  “He’s got a gun!”  Three girls ran out as we waited and then a huge fight broke out as two men beat each other up before our eyes.  The bodyguards jumped in to break it up, and by ‘jumped in,’ I mean stood around and did nothing.  That was until things got really out of control and they decided to escort the culprits out.

We were just in the middle of discussing the fact that MAYBE we didn’t want to go into a club where people were shooting at each other when Olive’s friend arrived, pointing out that we were in the wrong line and then led us into the correct club where I am happy to say, we were not asked to leave based on shoe choice.

The interior of this club was odd.  Music was playing so loudly that you couldn’t possibly hear anyone you wanted to talk to, yet no one was dancing, they were simply sitting and chatting.  Also, this thing was there, which I think really outlines the certain ‘vibe’ this place was going for. 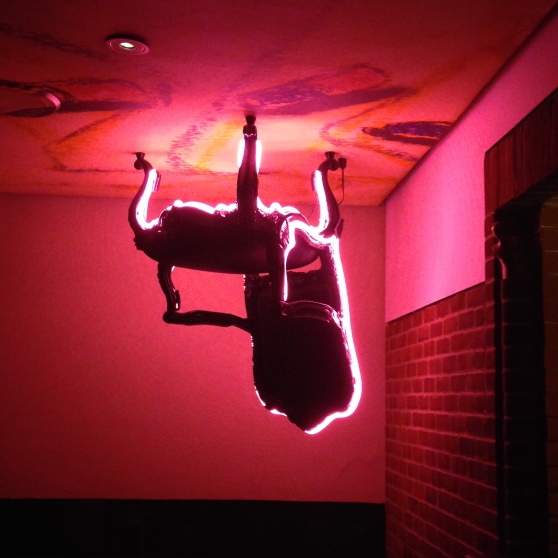 NOTE: Your mind is not playing tricks on you. I did not change the angle. This chair was indeed hanging from the ceiling.

The drinks were far too expensive and the only real enjoyment Carl and I found was watching straight men who had struck out, get to know each other even though they couldn’t possibly hear one another.  We finally headed out at 2AM, tired and confused, but ultimately happy.  Even after a night of waiting in lines, gunshots, strangely loud music and no-dancing clubs, how was it that we enjoyed ourselves?  I have a theory.

When you take a bunch of great people and choose to spend your time with them, it doesn’t matter what you do or where you go, chances are, it will be fun.  I think the lesson is to remember that time out doesn’t have to be crazy or drunken or filled with poor choices to be a good time.  It needs to have people who make you happy and who you can make happy just by choosing to be with them.  And if you happen to find those few people in this world with whom, even if everything you planned goes wrong, you can still have fun, then they are people worth holding onto.  If you find them, no amount of oddly overpowered clipboard holders or gun wielding macho men can keep you from your ultimate goal:  Living life and enjoying every minute.

SPECIAL THANKS to Olive, John and Ivy without whom this truly special night would not have been possible.

Check out Olive and John’s band and help support their cause right HERE.

This blog comes out of a weekly writing prompt I do with CARL LI and others.  Check out Carl’s latest post on this week’s prompt, “TIME OUT,” right HERE.