Roommates can be strange and terrifying.  You have to get used to each other’s schedules and you have to understand each other’s likes and dislikes.  You don’t have to be best friends, but you do have to find a way to co-habitate and be respectful of one another.  The idea of a roommate is odd because we as people don’t usually let anyone in to our lives so easily, yet a roommate is often a stranger, whom we choose to live with.  Never is a roommate so scary, though, as one who is not invited and shows up unexpectedly.

One night, while living with my old roommate, Carina, I was working at my computer.  The kitchen was set up so that across from the stove and counters was a nice large bar area, where I preferred to do my writing.  It was right underneath a skylight and therefore had a lovely ray of natural sun.  As I worked, I happened to look up, possibly contemplating the story at hand, possibly adhering to my attention deficit disorder, and there on the stove, as if nothing was out of the ordinary, was Douglas.

Up to this point, we had heard strange squeaking noises from within the wall next to the kitchen but we had thought them rusty pipes or possibly the neighbors below.  Now, I stared down the culprit.  My eyes blinked several times.  It is not so often that you see a mouse in your home and even less often that you see him chilling as if it was the most natural thing in the world.  I moved, only slightly, which must have concerned him because he bolted back into the stove through one of the burners.  That’s right, we had a mouse living inside of our stove.  Inside. Of. Our. Stove! 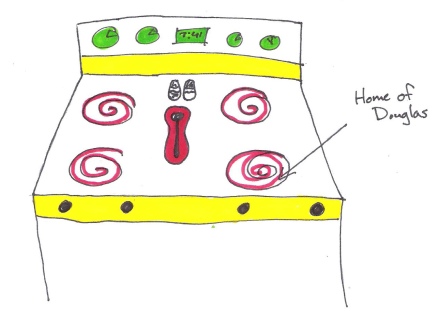 Douglas started appearing from time to time.  One night, I caught him in the hallway, on my way to the bathroom.  He scurried under the fridge.  Carina, who was the snackiest roommate, caught him under her bed one day and, being the esteemed photographer that she was, decided to take a picture of him.  The picture of him came out blurry and hard to make out but it had a certain Chupacabra-caught-right-before-running-off-to-eat-a-goat vibe.

Douglas sightings became our new favorite thing to talk about.  We’d gather each night at the bar area, have a drink and compare notes.  It was as if we were tracking Bigfoot yet in many ways, Douglas had simply become our third roommate.  In the meantime, our actual third roommate, Carolyn, was on her way back from a tour and had found out about Douglas.  “You have to kill it,” she told us, one day over a group chat.  “Kill it before I come home or I’ll never be able to do it.”  Of course, Carina and I were also incapable of harming the little guy.  We had NAMED him.  We would no longer be killing a pest, we would be murdering Douglas, and it was just not going to happen.  Carolyn, however, had a cat, and we decided that nature would take its course and we would not have to deal with the issue or the guilt.

The cat did not help.  She was aware of the mouse, sure.  Even Izzy would sometimes frantically scratch under the stove, knowing that someone who shouldn’t be there, was there.

But Douglas was a survivor and could not be caught by mere house pets.

Douglas sightings started to become less frequent once Carolyn moved back in though.  Apparently, the avoidance of capture came with less night time walks through the hall or evening romps on the stove.

One night, while out of the house, I received a text from Carolyn:  DOUGLAS HAS RETURNED.  He had found his way into her hamper and now Eeeva, her cat, was chasing him around the room.  Carolyn went to find a tupperware container.  Not wanting Eeeva to bite him and get a disease and also not wanting to have a horrific scene, involving our fourth roommate, occur in her bedroom, she had decided to try and capture Douglas once and for all.

Not long after, I received the message: OH MY GOD I CAUGHT HIM NOW WHAT?

I really had no idea.  When you get to the point of having a mouse as a roommate for a year and then finally the epic showdown comes where he is captured, you really don’t know what the next step should be.  After all, Tom never caught Jerry and therefore we have no grounds to know what is the proper protocol.  Carolyn poked holes in the tupperware container and left him to think about his actions while she considered the options.  She decided that if he were to be released right outside, he would probably find his way back, therefore he would need to be freed somewhere far away.

She fed him some cat food and put him to bed for the night, allowing Eeeva to say goodnight.

The next day, she took him to a park and released him back into the wild, which for a mouse who had spent the last year living in a New York apartment, was probably a shock.  We don’t really know what happened to Douglas after that, but I like to think he lived a fruitful life with a big family and beachfront property.

This event brought the three of us together, allowing us to share in a victory and become closer.  We all had different lives and schedules but something about Douglas unified us.  We all loved the idea of him but didn’t want a mouse in our home.  We all thought he was cute and didn’t want to be the one responsible for killing him.  He was our pet and roommate and for that year, he was like family.  Maybe the type of family you wish would have gotten a hotel instead of staying with you, but still family.

Living with strangers can be terrifying, and getting to know them, even scarier but in the end, we are all just people with dreams and aspirations and lives.  We all want to get along, have our space and have a little fun from time to time.  It’s not the chores or the dirty counters or the late bills that bring us together.  It’s the little things.

I want to thank Carolyn and Carina for not only allowing me to share this story and use their pictures, but also for being wonderful roommates and being their for me when times were less than awesome.

This blog is part of a weekly writing prompt.  You can check out Carina’s work HERE and make sure to follow thing ever lovely Carolyn on twitter HERE.