Hello my little Easter Bunnies!  After taking a delightful week off of mobile gaming to play Zelda and Persona 5, I’ve returned with the promise of a new update to DMK this morning.  While this is one of the smaller updates we’ve ever gotten, it comes packed with one huge improvement and some costumes to keep us busy for a while.   Hooray!  So get out your egg finding hats.  Put on your best set of bunny ears.  Let’s take a look at what’s new to the DMK universe! 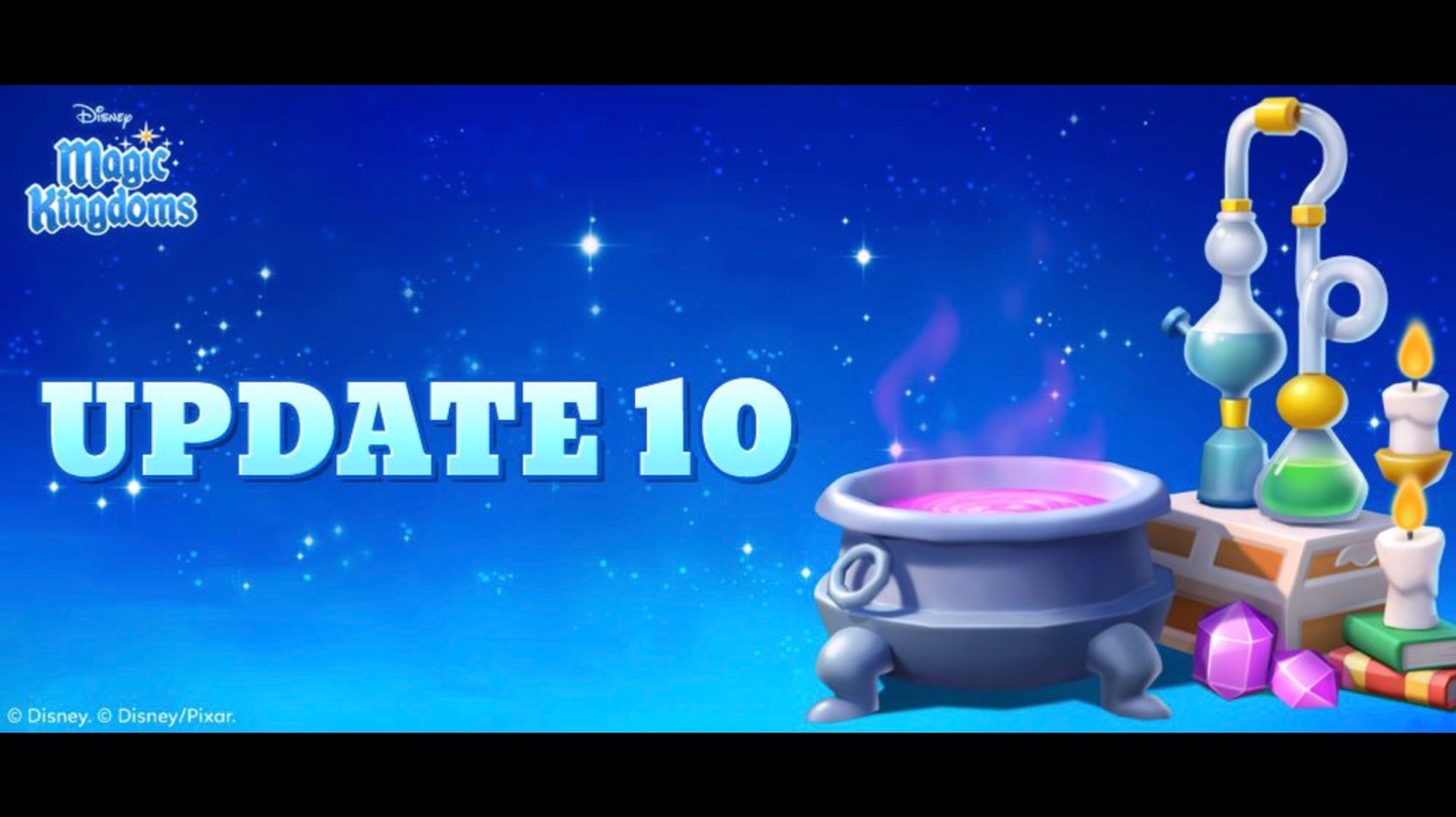 In order to access the Cauldron spell, you’ll first need to level the old wizard up to level 2.  This should happen fairly quickly as the only one of the requirements that takes a bit of time is the spell book, and even that only clocks in at an hour. Upon leveling him up, you’ll receive a quest to learn about the new spell.  It seems Merlin has noticed that the Kingdom is a bit cluttered.  We all noticed this about 8 months ago, but I suppose better late than never.  Perhaps it’s time to get that prescription checked out buddy. You’ll receive a rather vague quest to tinker around with Merlin’s cauldron. How the Cauldron Works

There’s a surprising amount of depth here to play around with so let’s take it all one step at a time.  The central idea here is that you can dump your most useless decorations into a cauldron, at which point it will spit out the current currency conversion rate worth of a new resource in the game called Elixirs.  Elixirs can then be used to purchase a plethora of items from Merlin. The photo below provides a further breakdown of these concepts. From the initial screen, you’ll be able to drag and drop your concession stands or decorations into the cauldron.  Looking at the lower left of this image, you’ll see a Cost in potions and a Reward in Elixirs.  Like anything in DMK, there is a cost to converting your trash into treasure.  The reward is the amount of elixirs you’ll get back after the transaction is finalized.  You can drag any number of unused concessions or decorations into the cauldron. To the upper left of Merlin is a button which looks like a present that is on fire with pink flames.  Clicking on this brings you to his Shop.

Here, you’ll have three tabs on the bottom that you can switch between.  Tokens, Kingdom and Chests.

Under Tokens you might find several different tokens, but for me, all I am able to see are cloth that I will need for the Easter Costumes.  I can use my elixers to purchase these if I so please. Kingdom will give you the opportunity to purchase exclusive attractions such as the super cool Jumpin’ Jellyfish attraction!  It costs 15,000 elixers though so make sure to destroy as many benches and lampposts as you can spare! You can also now purchase Chests from Merlin.  While expensive, this provides a great way to load up on those rare items during events and it doesn’t cost your precious gems! All in all, this is a FANTASTIC addition to the game and one that is a long time coming.  I say that for more than just the reasoning that we’ve needed something to do with all those extra benches.  This addition really goes to show that the devs are listening and they want to make the game better for us.  That’s always a good feeling! That’s right!  There is new land and if you aren’t looking for it, you might not even realize it’s there.  I know I sure didn’t see it at first.  At the back of Tomorrowland, there’s a new piece of land to grab for the low low price of 750,000 potions.  Yikes.  It will take 24 hours to unlock. In an interesting turn of events, chests now provide happiness, potions and an item!  Again, this is a great response to the outcries of the community.  These three items will come up as cards which you then flip to reveal.  It makes chests much more lucrative and alleviates the headache of waiting 12 hours for JUST potions. I’m not sure what I’m more excited about here.  Is the fact that we have new costumes? Or is it possibly the fact that Pluto is getting bunny ears?!?!  Nope, there’s no competition, it’s the bunny ears.  Gah!  They’re so cute!!!  Okay Jaysen, focus.  Let’s take a look at requirements for each of these.  Keep in mind that despite my first impressions, these are only available until MAY 3, so get to collecting ASAP!

Mickey’s adorably dapper outfit seems fairly simple, with a few fabrics that might be tricky but nothing a few trips to Merlin’s won’t fix. 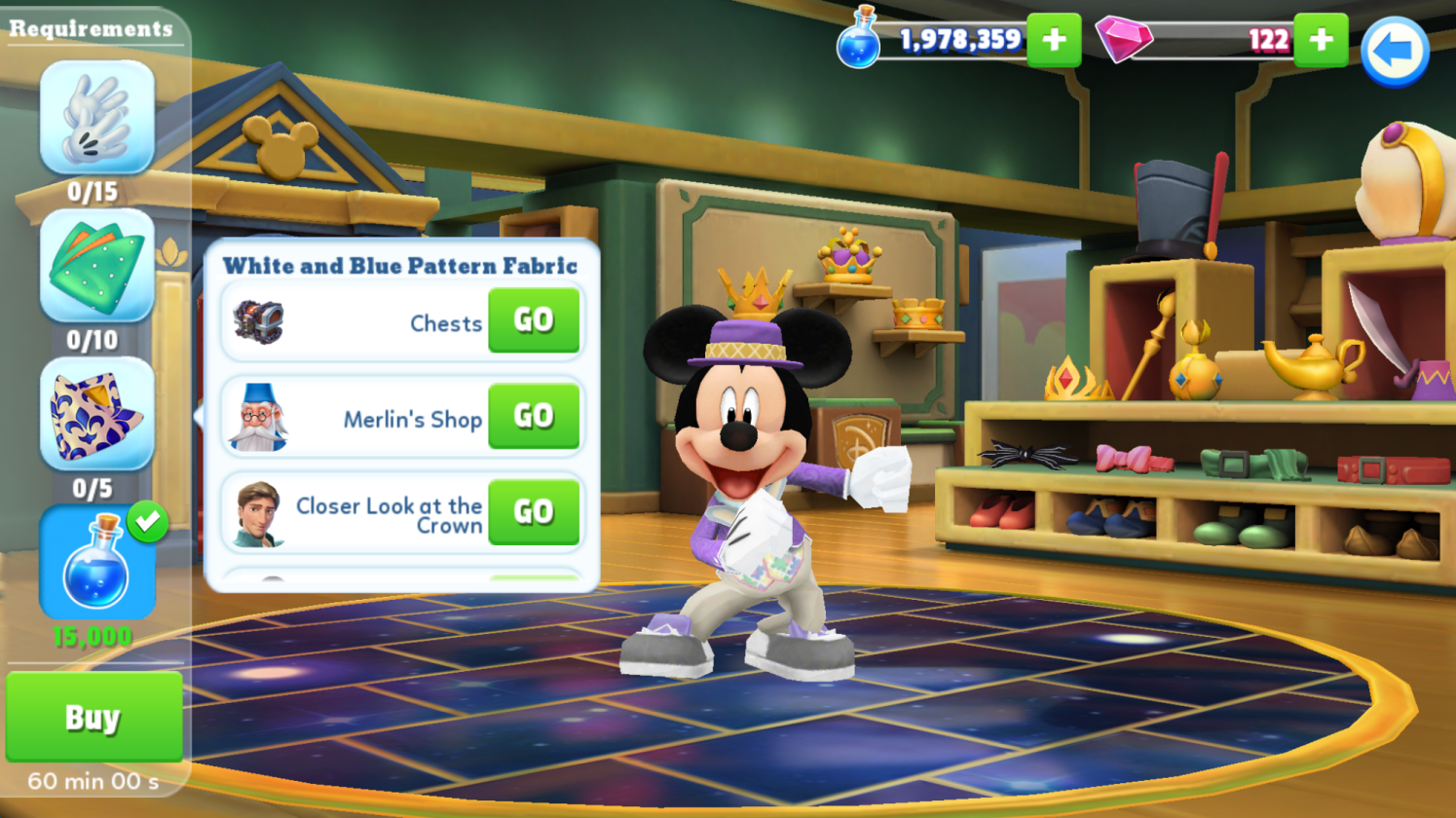 Goofy seriously looks like he’s finally hit retirement and is getting ready to wear a track suit every day.  Seriously, is this the Ed Harris from Modern Family costume?  Because that’s what it looks like.  Also, please tell me why I need 15 Goofy Hats for a costume with NO HAT!!!  Ahem.  Other than that, this one uses two easy fabrics therefore should be a cake walk. GAH!  IT BURNS!  IT’S SO CUTE I CAN’T HANDLE IT!  GAH!  MUST!  LOOK!  AWAY!!  All eye-burning aside, this one is a simple gem purchase.  *Shamelessly clicks the ‘Welcome’ Button and never looks back.*  Also, keep in mind that Pluto in costume will be able to search for fabric for the other costumes, making him a worth while purchase. Minnie’s costume might be my least favorite of the new one’s, but that doesn’t mean it’s not a cute spring time dress.  I just think it’s a little to fancy considering the other characters look so casual for the season.  Get with the picture Minnie!  Stop being such a show off! That’s it for this update.  It’s not as big as recent updates but with Merlin’s Cauldron and some great new costumes, it certainly packs a punch and will greatly affect the game going forward.  What do you guys think about this one?  Let me know in the comments below!