Oh look!  Over there!  It’s a Star Wars movie!  And thanks to Disney purchasing the brand and ousting George Lucas, resident bad writer supreme, we now can look forward to seeing new Star Wars movies!  This one’s a prequel, but not one of the prequels.  It’s more of a sequel to the prequels, but a prequel to the sequels.  Oh dear.  I’m already lost.  My hopes were pretty high for Rogue One, which makes a lot of sense in retrospect since, you know, rebellions are built on hope.  There were some definite wins.  A few minor misses and some other stuff that fell between those two bowls of Bantha food.  Let’s take a look.  Oh and hey, THIS REVIEW HAS SPOILERS!  You’ve been warned.

So let’s pretend you don’t know what Rogue One is about.  I’m going to at least assume that you have seen Star Wars Episode IV and know what it’s about.  You may recall that in that film Princess Leia was working to get a set of plans for the newly built Death Star home to the rebellion so that they could use them to take it out and save the galaxy.  Huzzah!  At one point, it is mentioned that the rebellion suffered a great loss to get these plans.  This film is all about that ‘great loss.’  It’s also about why it seems so darned easy to take down the Death Star.  It’s ALSO about a girl, who just wants to find her place in the world, despite being abandoned by her Imperial Scientist father and weird guy with breathing problems…uncle?  Sure, we’ll go with that.

Let’s start with some good.  For one, the world is beautifully built.  This might be the first time since Episode VI that I’ve really felt like we were transported back to the very lived in world of Star Wars.  There are so many neat little touches and cameos which really make it fit in seamlessly.  In a lot of ways, I think the Anakin trilogy really wanted to do what this movie does, which is to give us some reference and make us care more about the films already in existence by showing us how they got to where they are at.  Rogue One succeeds where the Anakin trilogy fails.  Seeing what it took to get the Death Star plans really does make them seem more important and it really goes to show just why the Rebellion needed, so badly, to stop the Empire from its wicked ways.

The cast is quite strong.  Felicity Jones feels fairly compelling while the villainous Orson Krennic feels pretty damn evil.  The standouts, however, are in the supporting cast.  From Donnie Yen as the blind Chirrut Imwe to Jiang Wen, a mercenary, leading lady Jyn Erso’s team is often more interesting than she herself ever manages to be.  And that leads us to a bit of a negative.  Jyn was, for me, the least interesting character in the film.  Sure, she was abandoned as a child.  She’s got issues because her father, you know, built the death star, but I just never felt her story move me the way I wanted it to.  In a sense, it feels rushed and a bit of a means to an end.  There’s so much other stuff going on and so many more interesting characters that her little story of redemption for her father gets lost in the mix.  I felt much sadder at some of the deaths at the end of the film, than I did when she lost her father, and to me that feels like a problem.  When Kylo killed Han, I FELT it.  When Galen Erso died, I was like “meh.”

While Jyn fell flat, though, many other characters made a huge impact.  In particular is the hilariously dead pan K-2SO, an imperial droid reprogrammed to work for Cassian Andor, a rebel alliance member.  K-2SO provides pretty much all the big laughs of the film and was a joy to watch.  Chirrut Imwe provides a fun look at how non-jedi have tried to stick with the force through these dark times and his action sequences are always fun, given that he is basically Daredevil.  Despite having main characters that seemed boring and one note, the side characters end up having enough charm to fill in all those gaps.

Getting into real spoiler territory, we have to talk about the fact that Grand Moff Tarkin was completely CGI’d into the film.  I’m interested to know what you guys thought of this.  Here were two different takes.  I loved it.  I thought it was fun to see how far technology has come and I thought it was just a fun way to keep this character in the film.  My partner, hated these scenes and thought the CGI stuck out like a sore thumb, especially the ending where Princess Leia shows up and smiles.  To each his own, but I found it to not overstay its welcome while being a fun throw back for fans. 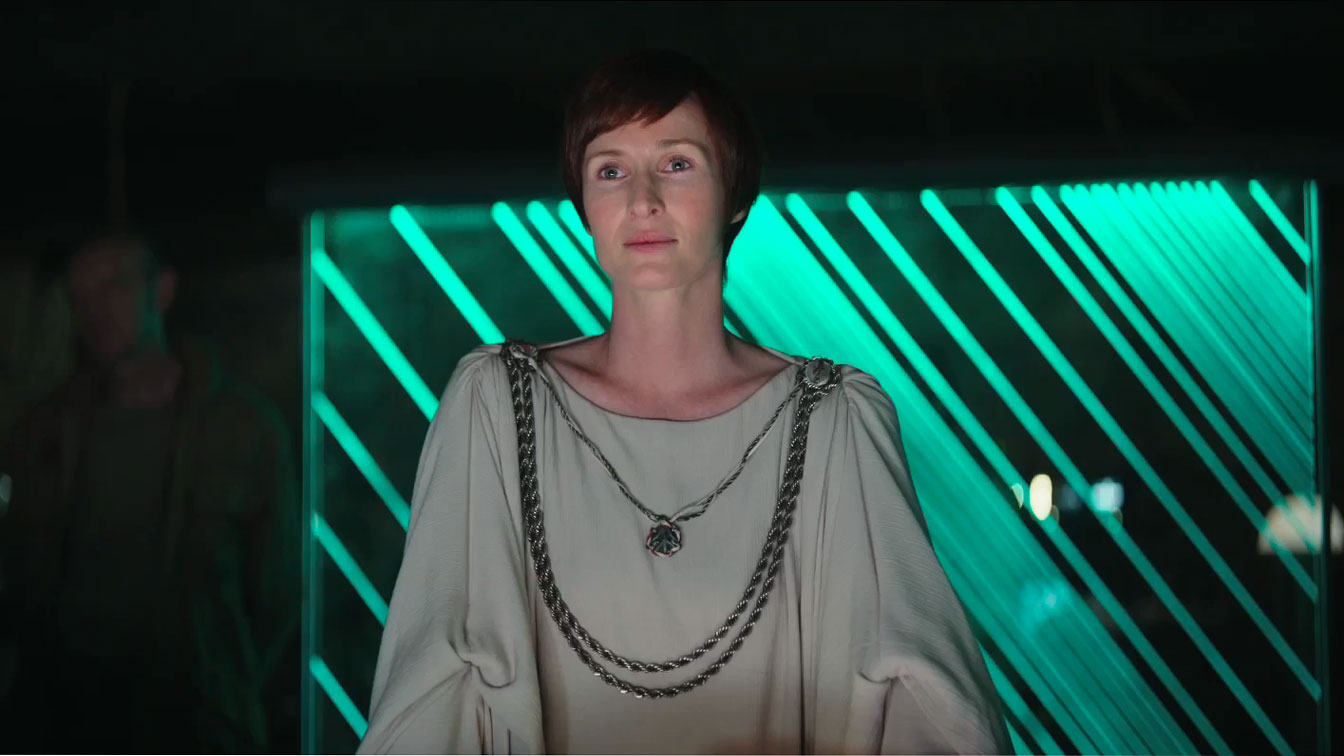 The ending is a tough one for me.  I love the way that it leads right into “A New Hope,” but I strongly dislike stories where all the main characters die.  I assumed this would be the case going into the film as, well, how do you explain us seeing this rag tag team for the first time?  However, because Jyn and Cassian are so bland, their final deaths just feel, well, I didn’t feel anything really?  It lacked any sense of worth.  I was sad to see K-2SO and the rest of the team go because I’d learned to love them.  I’d seen their side of the war, but also seen a charm from them.  They’d worked their way into my heart.  The fact that I did feel their loss, made Jyn and Cassian going feel even more lackluster, which is important because it’s a pivotal moment of the finale.

Despite ALL of that, this is a fun movie.  A really fun movie.  The action is fantastic and, regardless of some flat characters, the story was truly engaging, despite being a prequel.  The film has everything a Star Wars fan could want, from amazing space battles to Darth Vader losing his temper and force killing everyone in sight.  There’s a lot to love here and fans are sure to not be disappointed.  In the end, everyone dies, but what lives on is the importance this team had to the rebellion and the eventual turnover of the Empire.  That point rings true.  While it has its flaws, Rogue One stands as one of the better entries in the Star Wars cannon and will sure to have fans excited to see the next chapter when we get our first glimpse of Episode VIII.

Fore more of my thoughts on Star Wars, Head Here!