After watching Grave of the Fireflies, literally any film we watched next was going to feel like a friendly reprieve.  Heck, we watched The Conjuring 2 this week and I thought that had more warm and fuzzies than Grave.  But let’s face it, if Grave of the Fireflies gets the most depressing animation award, than Totoro can happily take the most adorable award.  This is a film full of joy.  It’s a film which celebrates community, nature and imagination.  My Neighbor Totoro gladly shouts to the heavens that there is magic in the world if we can only open our eyes to it.  While not the conflicted painful story of other films, Totoro shines as a calm slow burn of a film, which very gradually lets you into its space the way a cat needs time to come out of hiding the first time you are in its house.  Moreover, Totoro could easily be considered the quintessential ghibli movie.  Even if you’ve never seen one of these films, you are sure to at least recognize the large furry rabbit cat at the header of every Ghibli film today.  So come along and let’s explore the world according to the guardian of the forest.

It might be hard to believe now, but when the idea for Totoro was pitched to investors, they wanted nothing to do with it.  It was childish and had no conflict and very little drama.  It was deemed so uninteresting that the backers were sure that no one would want to watch it.  Because of this, Totoro almost got left on the ground floor.  This was until Takahata pitched Grave of the Fireflies.  Investors loved this idea but found it to be very risky.  So what do you do when you have two movies, one that is risky, and one you have no faith in?  If you guessed, release them together as a double bill so that families can be heartbroken and then overcome with wonder for three hours, than you guessed correctly!  Prizes will be handed out at the door. And now kids, we present the most confusing double feature in history.

And to a degree, the investors were right to be worried.  Totoro’s success was not instant.  In a way, its popularity spread like a cult film until before long, everyone was talking about it.  Suddenly, the demand for merchandise was being thrown at Ghibli and the studio was not eager to accept.  They wanted the work to speak for itself without the worry of selling toys.  As we know, of course, they eventually gave in, provided that they had strict control over any Ghibli merchandise.  To this day, they continue to have strict control within Japan and there are even Ghibli specific stores where you can buy everything from plus Totoros to Totoro Umbrellas.  Cha-ching!  Totoro is such a hit in Japan that there is even an area of the Sayama Hills preserved by the Totoro no Furusato Foundation, an organization which preserves Japan’s natural habitats or as they put it, The Homeland of Totoro.

I mean, would anyone have forgiven me if I didn’t use this picture?

What makes this film truly unique is the slow burn as it gradually builds up to more and more fantastical.  We don’t fall into a world of whimsy or magic.  Rather, Miyazaki takes our hands by way of leading ladies Satsuki and her younger sister Mei.  He then gently pulls us down the rabbit hole of wonder and exploration.  At first, we are shown dust bunnies, little black spirits which hide in the house.  Then a very small Totoro.  Then bigger ones.  Then a cat bus.  But it is all gradual.  Nothing seems out of the ordinary because we are shown to believe that these are the spirits of nature which only show themselves to children as they are the only one’s with open enough eyes and hearts to see them.

Ummm, maybe we should check out another house. Is it too late to move?

There’s a sense of respect and wonder for nature and that which we cannot see.  I love that Mei often makes a point to say that she is not afraid of ghosts and the children and their mother are happy to be living in a haunted house.  Their mother, who is living in the hospital, a semi-autobiographical nod to Miyazaki’s own mother who was living with spinal tuberculosis, encourages the children to not be afraid.  In a film where many people would run away from the strange sightings, Mei and Satsuki bravely look for them and are even excited by them.  Mei follows a small totoro into the woods, nearly getting herself completely lost and the two of them celebrate after their iconic meeting with Totoro in the rain and then the cat bus.

Auditions for Mary Poppins that you never saw.

I love the unique Japaneseness of the film.  Satsuki walks around in the house on her knees, not wanting to take off her shoes, but not wanting to break the rules either.  The family bathes together in a very fun moment where their Father laughs to scare the ghosts away.  And then there’s this sense of community.  Everyone helps everyone else out.  There is not a single person in this film that shows any sense of greed or entitlement.  Granny is always around to help and the people of the small village are always there for each other.  It’s a simpler life and one that allows us to take a breath.  In a sense, Totoro is like a visual meditation.  It asks us to observe the tadpools, take a bike ride through the woods and stand in the rain for a while.  Nothing is ever rushed and no scene feels like it is working to make a point.  We are simply living with this family as they discover the natural world around them.  It’s tranquility makes it enchanting.

I’m just gonna hang out with these guys and my corn and think about where it all went wrong.

Something that I’ve talked about from the start of this project is the beauty of each shot.  Totoro is no stranger to this idea.  Every little scene feels meticulously crafted and thought out.  Every moment feels so genuine and real, and that is something that I’ve come to really admire about Miyazaki early on in this project.  He’s said before that he doesn’t write scripts, he simply creates storyboards and lets the characters guide him.  As a writer, I’m fascinated by this concept.  You can see it in his work.  These characters drive the story.  Their very real emotions and feelings push forward the wonder and excitement of this film.  By the end of the film, Satsuki believes so much in Totoro, that she goes to him for help to find her lost sister.  Yet, this feels like a very real choice to make.  I never once questioned motivations because I really felt like every decision and line of dialogue was coming from a place of “Yes, that is what she would do in this situation.”

More than anything, I love that there is absolutely nothing else like Totoro.  It’s fascinating and charming and it stays with you, making you smile after you’re done watching it.  You might grin thinking about the neighbor boy Kanta liking Satsuki, but being too stubborn to admit it.  Or you might giggle at the thought of Mei waking up Totoro in the middle of his nap.  You look off into the distance and wonder if the Catbus is out there somewhere, making the rounds.  I was genuinely sad when the film ended, not because it has a sad ending, but because I simply wasn’t ready to leave this joyous world.  It feels like a place you could for the summer and it makes you yearn for the simple life in the country, near a forest which hides all manner of secrets. 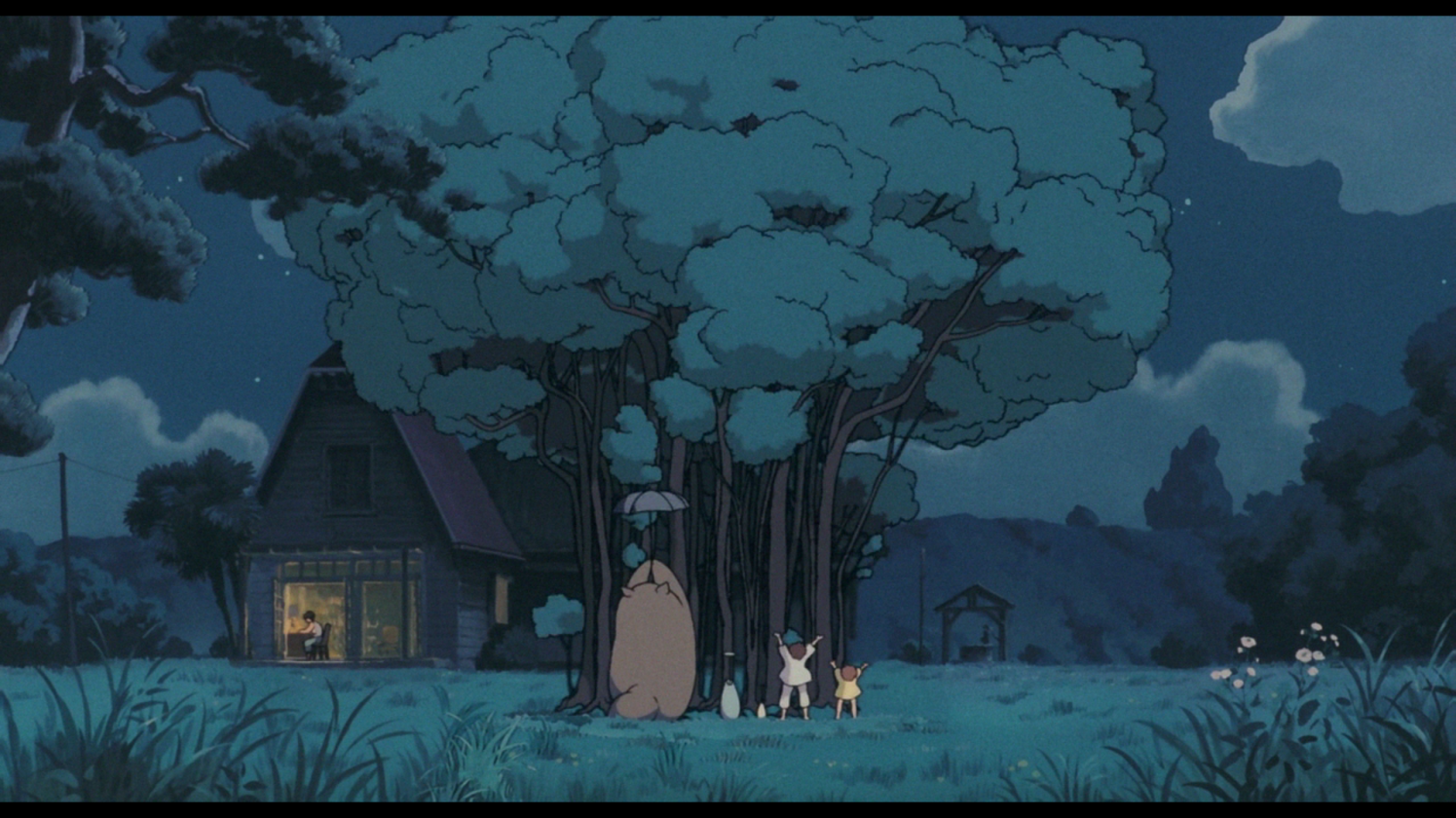 While many of the films on this journey will be completely new to me, this one is not.  My Neighbor Totoro is a film I have seen before and will watch many more times in my lifetime.  It is always a joy and a pleasure to sit down to and I’m never ready for it to end.  That being said, Ghibli now has a mascot and things are looking better in the money department.  Now we venture forward towards more mystery, more magic and more incredible animation from a studio which seems as though they don’t know the meaning of the word “Disappointment.”  Though our catbus is leaving the station for today.  We’ll return again next week for even more fun.  After all, this adventure is just getting started.

NEXT UP:  Kiki’s Delivery Service