Deep in the Hundred Acre Wood, where Christopher Robin plays, you’ll find a character who has become something of a life affirming guide for me. If you haven’t read my post for the original Winnie the Pooh, you can do so HERE. And you really should, because I talk a lot there about the history of Winnie the Pooh and his relationship with Disney and I won’t really be re-covering that here. This is a short film and thus, this will be a short article. Yet, the facts remain very much the same from my original Winnie the Pooh outing. Pooh is fantastic and this film, with all its simplicity and lack of action or big drama, still manages to be absolutely wonderful.

Winnie the Pooh feels a bit like an absurdest play at times. None of the characters understand each other and they often forget what they are or what they can do. Owl forgets that he can fly at one point and then, when he does fly, goes right back to being in a pit and needing help. The entire premise of the film is that Christopher Robin has been captured by the terrible Backsun and must be saved. However, this only happens because his note “Be Back Soon,” is misinterpreted by Owl. The story is a farce, completely ridiculous because there is no Backsun to be caught in the first place. In any other world or story, this would be a slog, feeling boring and pointless, yet the characters of Winnie the Pooh are so full of charm that it manages to work.

I’m going to level with you here. Pooh is fantastic in this film, but the real star here is Eeyore. In a quest to find his tail, Eeyore is given everything from a spring to a clock for a new tail and must deal with all of these. The thing I love about Eeyore is that for all his sadness and depression, he accepts whatever tail he is given. He’s so miserable yet when someone puts a cuckoo clock on his butt, he finds the best in it. This is not even mentioning that his polar opposite, Tigger, decides to turn him into Tigger two, affixing him with a spring and painting him with stripes. As this played out, I found myself dying with laughter, because Eeyore, while totally not the better for this situation, just goes along with it. He’s sort of like a cat when children are around. They toss the cat around and the cat just sort of lets it happen.

Trust me, this is gonna be great…

To better understand what I love about this movie, here is an excerpt from the script that had me laughing out loud the whole time.

Owl:  All right. Yes, well, the thing to do is as follows: First, issue a reward to the…
Pooh:  Gesundheit.
Owl:  I beg your pardon?
Pooh:  Well, you sneezed just as you were going to tell me what the first thing to do was.
Owl:  I didn’t sneeze.
Pooh:  No, you did, Owl.
Owl:  No, I didn’t. You can’t sneeze without knowing it.
Pooh:  Well, you can’t know it without something having been sneezed.
Owl:  [Pause]  As I was saying, first, issue a reward.
Pooh:  [To Eeyore]  He’s doing it again.  You must be catching a cold.
Eeyore:  I’ll probably catch it, too.
Owl:  No, no, no! I’m not catching a cold.  The word is “issue,” not “achoo,” and “achoo” isn’t even a word.  It’s just a sort of sneezy sound like achoo!
Pooh:  Perhaps you should lie down, Owl?
Eeyore:  My throat feels a little scratchy.
Pooh:  Open wide, please.
Eeyore:  Ahh.
Pooh: [Inspecting Eeyore’s mouth] Just as I suspected.  Owl, we need honey. The scene plays out like something you might find in great plays like “Waiting for Godot.”  It’s completely absurd and within that absurdity is hilarity.  After all, the entire film is one big misunderstanding after another.  Yet, at the heart of all of this is a story about friendship and kindness.  Tigger just wants to make Eeyore happy and when he can’t, he’s so sad, but Eeyore alleviates the situation by reminding Tigger that “the most wonderful thing about Tiggers is that there is only one.”  Piglet must go into the woods to save his friends, despite being terrified of the Backsun.  Pooh must fight off his hunger to be the better friend.  There’s just so much friggin’ heart in this film, I can barely deal with it. A complaint of this film, of which there are very few, is that it is very short, coming in just over an hour.  Yet, to me, it is the perfect length.  The world of Christopher Robin invites us in to stay a while and contemplate these characters before kindly ushering us out again.  It never feels overlong and not once did I feel bored.  The film is the perfect length, which although short, still manages to encapsulate everything that made the original film so fantastic. The soundtrack is a lovely mix of calming music and folksy ditties.  A stand-out is Tigger’s “It’s Gonna Be Great,” which is everything you want from a Tigger song.  While none of the songs will win awards, they all fit perfectly with the package and make the film that much more charming.  The animation remains true to form as well and we have the feeling that we are home the second the film begins. 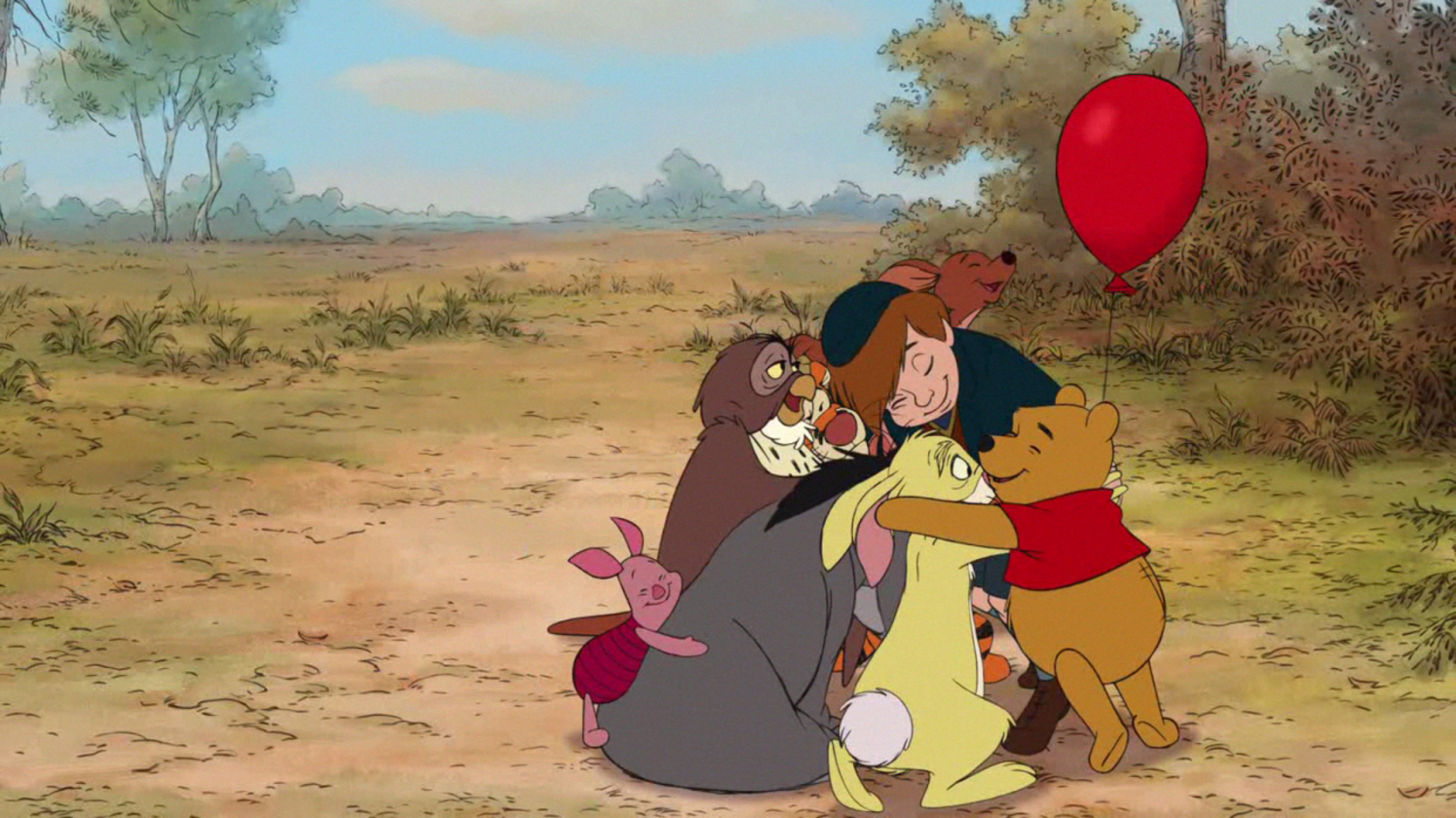 In the end, all that matters is friendship.

If you haven’t figured it out yet, I adored this movie.  Moreover, I adore Winnie the Pooh.  He has come to be one of my favorite characters in all of Disney and the friends he brings with him always leave a huge smile on my face.  This isn’t a tale about epic adventures or thrilling action.  It is a simple movie about friendship and huny, lost tails and Backsuns.  It’s simple yet elegant, strange yet moving.  If you are a Winnie the Pooh fan, this is everything you hope from a new tale from the Hundred Acre Wood and just like its predecessor, the dialogue begs to be listened to again and again.  As our last 2D film in this series, it leaves me with a sense of warmth and love that only a film like this can. 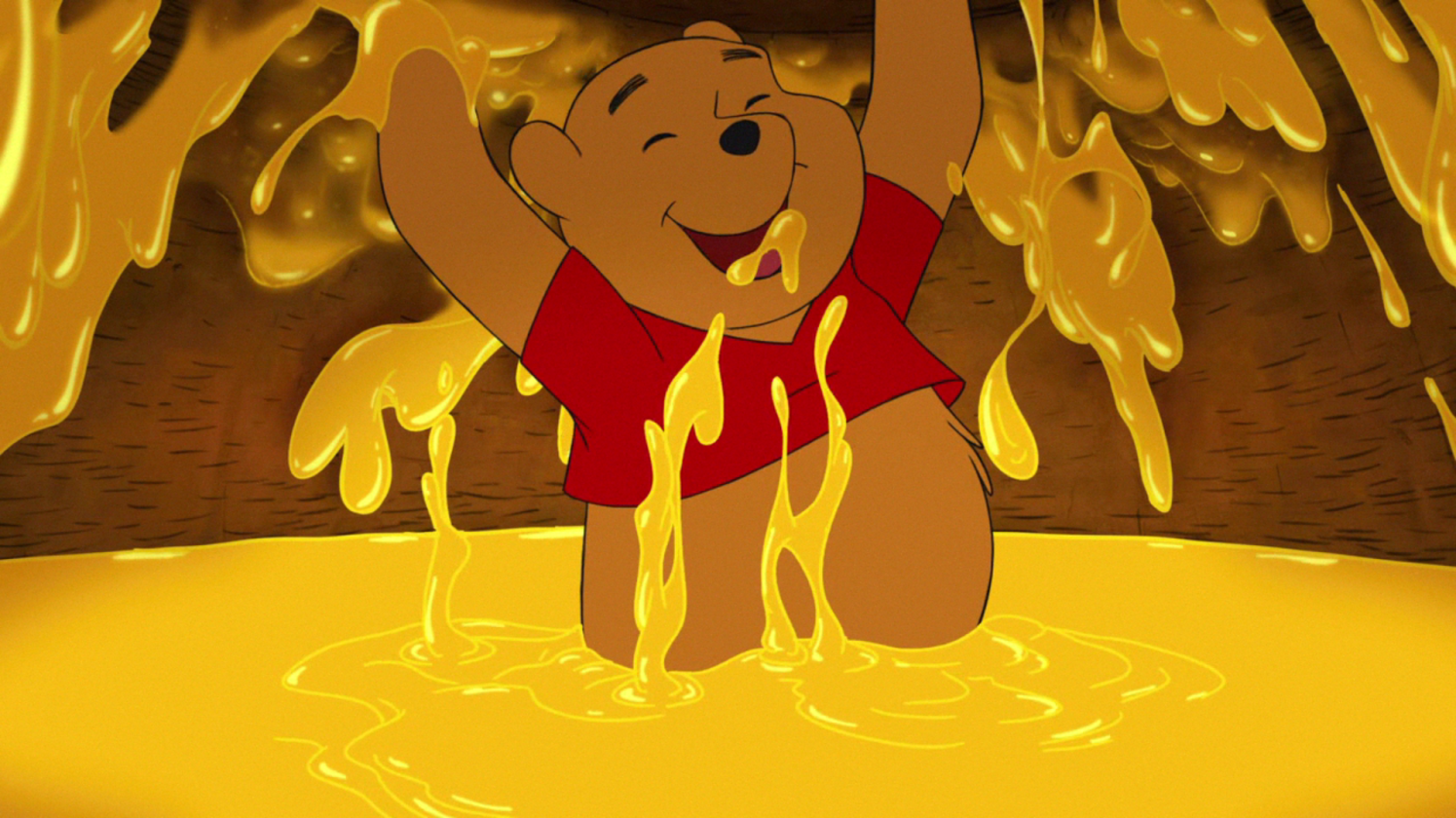 Next Up:  Wreck-It Ralph