Yes, I know, we are skipping ahead a bit, but fear not!  We will get back to the other Vault Disney films we’ve yet to watch.  Something important has happened.  Disney’s newest animated film, Zootopia, has just released and we got the chance to go see it this evening.  Every so often a film comes along with such a rich world and an important message that I can’t help but fall head over heels in love with it.  This was the case for our recent viewing of Lilo and Stitch and it was true tonight.  There are a lot of ways I can describe Zootopia and I will try to do it here with as few spoilers as possible.  Yet despite all the reasons I am about to tell you as to why you need to see this movie, only one word truly encapsulates my opinion of this excellent films:  Perfect. 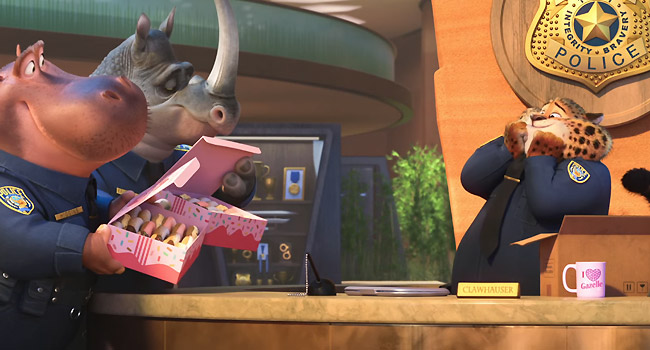 O. M. Goodness! This is so exciting!

Zootopia tells a tale of two pretty distinct ideas.  You can be anything you want to be, even though it might not always be easy and Don’t judge someone by the way they look.  To do this, we follow young Judy Hopps, a bunny with the hopes of being a cop and making the world a better place.  In order to do this, she has to go against her family who frequently tells her that bunnies are not meant to be cops.  Of course, this only fuels her further.  in fact, often times in the film, Judy takes others putting her down as fuel to the fire for her becoming the person she wants to be.

My eyes are the same color as Mace Windu’s lightsaber. Boom.

I should take a step back here and say that one of the stars of the film is the fantastic world.  Zootopia feels alive with different districts, varied animals and streets filled with ideas everywhere you turn.  The thought process here was to make a film where the animals had designed the world to fit their needs.  There are special restaurants for elephants with bigger sized food.  There are different sized doors for different sized animals on public transportation.  Different districts are formed to provide for the needs of the animals who live there.  It just feels so rich and as if it were a real place.  You get lost in it and it keeps your eyes glued to the screen for whatever crazy thing you’ll see next.

Once in the city, Judy continues to find that no one believes in her.  When she finally gets her shot, she blackmails a con artist fox, Nick Wilde, into helping her solve a case that she’s staking her whole career on.  She and Nick play an odd couple but they really represent both sides of the adversity faced in this world.  Predator and Prey, they are both victim to stereotypes and people who think they are only capable of being just what people expect them to be.

Along the way, there’s a wild cast of characters.  From an obese cheetah to a yak that is part of a naturalist club to the now famous Flash, the sloth who works at the DMV.  Every time a door opens, a new delightful character is waiting around the corner and all of them are unique and heartwarming.

Wait for it. He’s about to do this smile thing. It’ll make you laugh every time. I promise.

That’s not to say that the film is all fun and games.  Deep down, this film has a message that is begging to be heard.  It’s a message about how people use fear as a reason to treat others poorly.  Things get said in the film that scarily reflect our world.  Hating someone just because of their species.  Treating people as though the color of their skin denotes whether they are a good or bad person.  Choosing fear and anger over understanding and communication.  It’s a reflection that is desperately needed right now and the real shame about the film is that the people who need to see it, probably won’t. 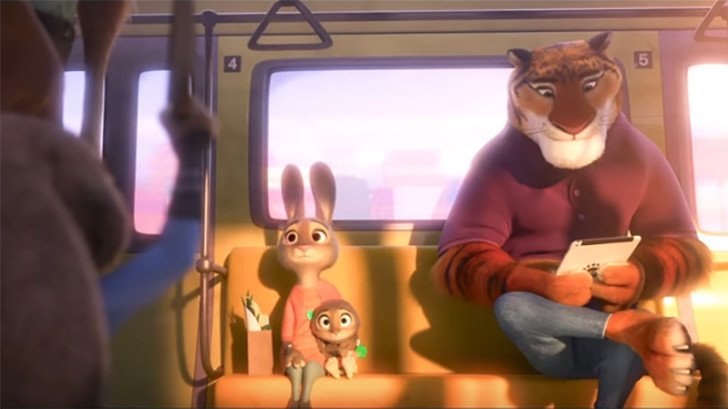 Believe it or not, this is one of the most powerful and close to home scenes of the film.

I can’t really say anything about the villain without spoiling the film, but I will say that it is a villain that encapsulates the darker parts of the film and someone who perpetrates the ideas of fear and racism.  The film does a great job of capturing this heavy theme and wrapping it up in an easily digestible format, but I really appreciate that it will have adults thinking for a while and will have kids learning to judge people based on who they are, not what they look like or where they were born.

Daddy! I told you to trim your eyebrows before our wedding!

That’s about as much as I can say about Zootopia without ruining the best parts, and you owe yourself the chance to experience those.  This film is fantastic.  While we haven’t watched Frozen or Big Hero 6 as part of this series yet, I will say that in my opinion it is easily better than both of those.  It is a film that speaks on many different levels and leaves us with the knowledge that nothing in life is easy, but everything we care about is worth going for.  Everyone is an individual and deserves a chance and caring for others always trumps treating others like crap.  Go see Zootopia.  It’s one of Disney’s all time best and people are going to be talking about this film for years to come!

Oh and also, Shakira is in it.