Do you yearn for more stories about animals? Are you called to the wild? Do ever wonder what happens when one bear in the woods dies? Do moose have Canadian accents? These are the questions presented and answered by this week’s Vault Disney film, Brother Bear. At the time of this film’s release, I was fifteen years old and just starting to really get into animation in general. It was around this time that I really decided I wanted to be a story teller in some form, though at the time, my focus was more in film. I recall really liking this film for the music and the moose, which are my second favorite animal. Second only to penguins, because of obvious reasons. So watching this film was a bit of a treat. Yet, after all these Disney films, did I think it held up? Was it as good as I remembered? Did I realize that The Good Dinosaur blatantly ripped this film off? Let’s find out.

So you’re telling me this whole story will get redone in a decade with dinosaurs and people still will not like it? Bleh.

Following the success of a little film called The Lion King, Michael Eisner wanted to do more Shakespeare inspired animal flicks and proposed a North American backdrop for a film about the King of the American jungle, the bear. Originally, this idea was inspired by King Lear and involved a blind bear and his daughters. Sounds bleak. Animator Aaron Blaise joined the project in 1997, sighting the fact that he really wanted to draw bears as his reasoning. He was soon joined by co-director Bob Walker. Together, they produced a treatment for a story about a father and son, involving the son being turned into a bear. They traveled to Alaska to research for the story, exploring the Valley of Ten Thousand Smokes as well as Kodiak Island. Eventually the story shifted to a point where the transformed son is taken in by an older bear, but with the story still lacking the Disney charm, this older bear was made to be a cub and the character of Koda was born. At a certain point, Denahi, who was originally the father figure, was also changed to be Kenai’s brother. Joaquin Phoenix rarely recorded with Jeremy Suarez, voice of Koda, but Dave Thomas and Rick Moranis, voices of the Moose brothers Rutt and Tuke, performed together throughout the entire recording process. This might explain the fantastic chemistry they have with each other. Brother Bear was nominated for best Animated film, but lost to a little flick known as Finding Nemo.

Right out of the gate, you’ll notice that Brother Bear is not the sweeping epic that pushes the limits of story telling and animation which we’ve come to expect from Disney over the past several films. Not even close. This is much more reserved film with much smaller animation.  This is also a film which really focuses down to inter-familiar relationships and just what the power of love can be. There’s no real villain here. I’m sure you could argue that Denahi is, but he isn’t evil by any means. Brother Bear is reserved where so many other films have taken crazy risks. It heralds back to the 80’s and early 90’s with a more poignant character driven tale.

It also has detailed tutorials on yoga poses.

Brother Bear also does something special in that it uses the aspect ratio to help tell the story. In the early half hour of the film, before Kenai’s transformation, the image is square with black bars to the sides, but once he transforms and awakens a bear, the bars are gone and we get the full widescreen experience. The colors are also enhanced from this moment forward. Despite not being the visual treat of our past several films, this film still has some beauty to behold. I think the fact that we so rarely see North America animated into these films makes it feel fresh and different. The bears themselves are also great looking, with lots of lovable folds and big bulky movements.

Okay, but that bear on the right is everything I’ve ever needed in my life.

The real story here is a tale of Kenai becoming the adoptive brother to Koda, who’s mother dies senselessly at the hands of Kenai early in the film. Koda is adorable and it’s a treat watching Kenai learn to love him, despite the fact that Koda doesn’t know when to stop talking. It’s a story that many siblings can relate to and I love the fact that they annoy each other until someone threatens them, until someone threatens their family. Then it becomes a struggle to protect each other. The comparisons to The Good Dinosaur are easily made and start up early. Sitka’s death is very similar to Arlo’s father dying and then Arlo gets washed down a river, much like Kenai. Oh and there’s that whole business about being a man and getting to put a handprint on some wall. Not to mention that the Kenai, Koda relationship shares a number of similarities with the Arlo, Spot relationship. It’s amazing just how often this film reminded me of Good Dinosaur until the very end. We have to talk about Rutt and Tuke because they are my favorite part of this film. I love the yoga poses and the ‘driving’ of mammoths and the Canadian accents, which regardless of whether or not they are accurate are downright hilarious. I recall my first couple of viewings of the film and just loving the moose. “Let me drive. It looks like you hunted me.” Amazing. I also like that they come into the spotlight towards the end. They’re mostly there for comic relief but it’s nice to see that they have a big affect on Koda after he learns of his mother’s fate.  They help Koda, who they refer to as little bear, to realize that Kenai is his family now. 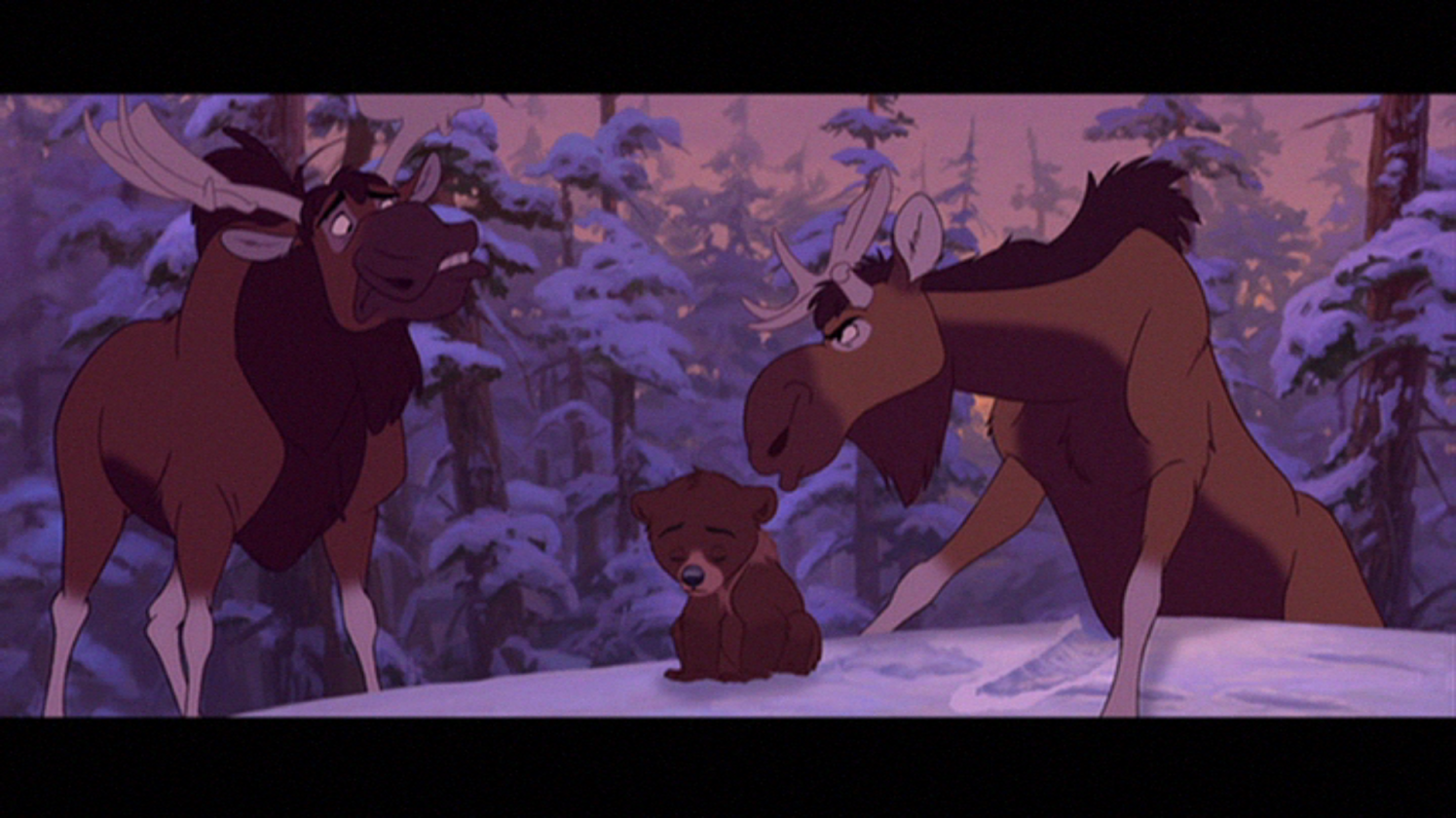 Sit tight Little Bear, we have a lesson to teach you.

Another big highlight of the film is when we get to the salmon run and meet the other bears who are full of wonderful personalities. A big regret I have with this film is that we don’t get to see these bears earlier in the film, as I think they add so much life to the story. I especially love the old grandmother bear who swears that dear sweet Edgar has passed, when obviously he has not. “Stop telling everyone I’m dead!” I just spent the whole day at Disney, I can’t go on.

Listen, Brother Bear is not, by any means, Disney’s best film. It doesn’t push any limits or make us rethink animation. It doesn’t have any amazingly catchy songs and the characters aren’t going to win any awards for being deep and thoughtful, BUT Brother Bear is a charming little story about family and love and just how our actions affect the world around us. It’s not perfect, but it is quaint. It’s an adorable little film that harkens back to an older time for Disney and tells a story that, while not wholly original, has some good value for anyone who cares to watch. There are plenty of good laughs and a heartwarming ending. Besides, this is one that I’m guessing a lot of folks haven’t see. Give it a try, you just might like it.

We’re all just bears, deep down.

I’ll be taking the next two weeks off of Vault Disney films to focus on the trip! We will return with some cows who just want to go home in two weeks and in the meantime, you should just come here every day to see what we’re up to at Disney World!

Next Up: Home on the Range