Have you ever had a film which you know you love but haven’t seen for a very long time? Then, when you go to watch it, you somehow love it even more than before? If you have, than you’ll understand my feelings towards Mulan just about now. I knew this was a great film, but re-watching it after all these Disney films really nailed it in as one of my absolute favorites. In many ways, Mulan corrects the sins of Disney’s past. Often times, Frozen is credited as really being the ultimate feminist film from Disney, but I am here to tell you that that title belongs to Mulan.

Walt Disney Feature Animation Florida was never meant to do full feature films. In fact, they were meant to only produce shorts for the main studio. However, after helping at length with the production of Beauty and the Beast, Aladdin and The Lion King, Disney decided that the studio was equipped to handle a full film and Mulan became the first of three. Disney became interested in a series of children’s books with a theme of Asian culture by Robert D. San Souci and began working on a project that was intended to be straight to video, entitled China Doll. Thomas Schumacher proposed that Souci come up with other idea, which prompted him to put together and script based on a Chinese poem entitled “The Song of Fa Mu Lan.” The story was a hit, and eventually the two projects were merged together.

Well, this is awkward.

Barry Cook, who had worked on Roger Rabbit, was offered two projects, one about a dragon in Scotland, the other Mulan. He suggested adding a dragon to Mulan as well and a week after the offer, was begged to work on Mulan. Bancroft was recommended by Rob Minkoff, who was busily working on The Lion King. In 1994, true to form of our past several films, the production team was sent on a research trip to Beijing, China in order to study the landscapes and architectures of areas where the original legend took place. Also researched were the muscles on this hunky piece of…ahem…where were we?

Originally, Mulan was meant to be a romantic comedy, but quickly changed to the film it is now. Writers sighted the sequence of Mulan cutting her hair short as a defining moment, not only for the character but for the story itself. This was the first sequence put into the film and helped to establish the fact that this was a story about a strong female protagonist, not necessarily a love story.

Me when someone takes the last chocolate chip cookie.

Obviously, there was no dragon in the original story, but Mushu was added. Eddie Murphy demanded to be able to record his lines in the basement of his home, as opposed to the studio. Cri-Kee was a character no one wanted with the exception of Michael Eisner and Joe Grant. Often times, the story creators would feel that he was in the way or was the last thing to be thought about. Grant often slipped pictures of Cri-Kee under the directors’ door in order to convince them he could be a fun character to put into the film. Obviously, his efforts were a success. 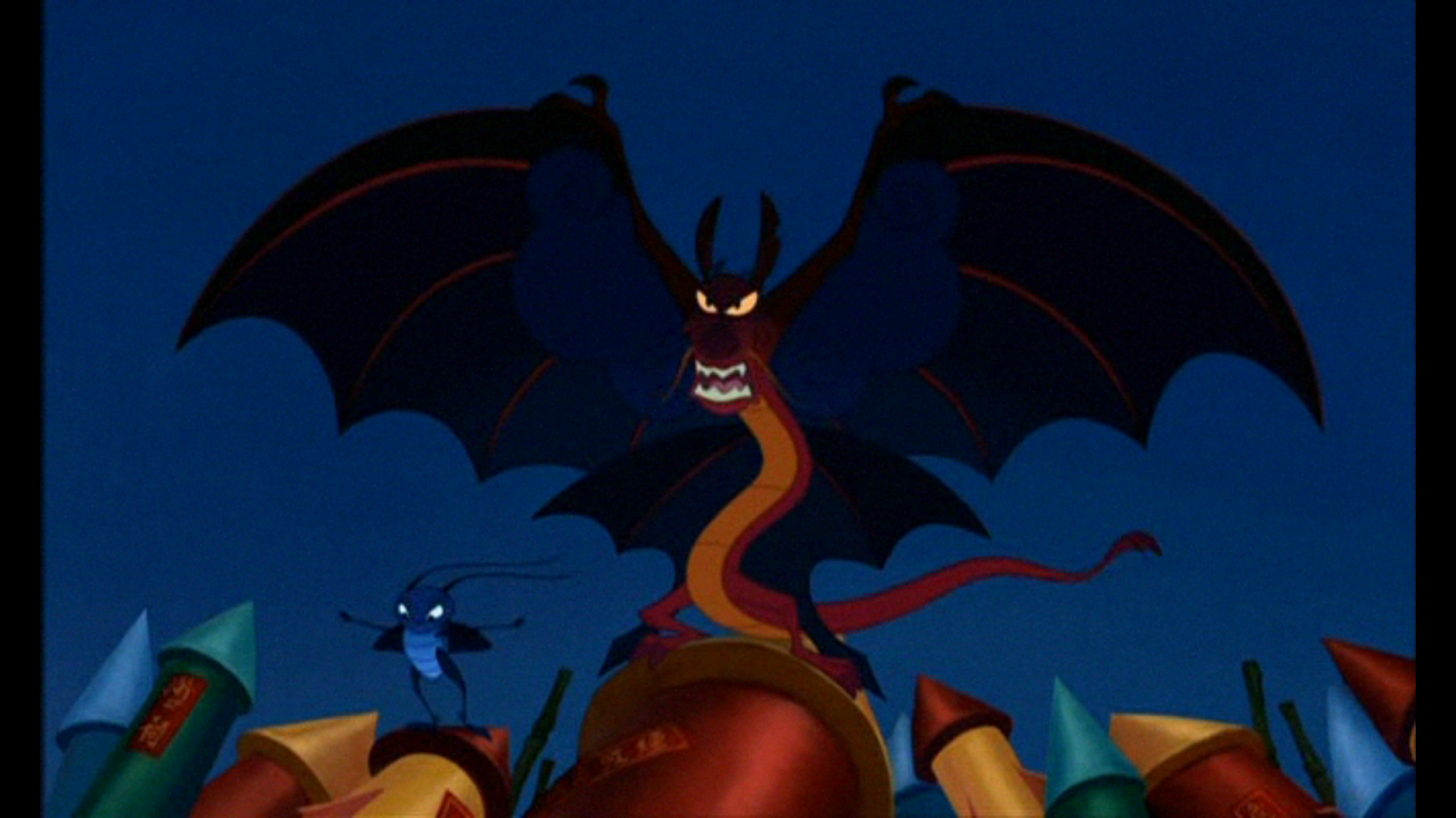 Hey guys, check out this Batman and Robin cosplay I found.

There’s a lot of history to go through here, and as always, I will say that if this is your favorite, please PLEASE go do some reading because it’s all so fascinating. Before we move on, I want to talk a little bit about the scene in the mountains where the Huns attack. 2,000 Hun soldiers were created for this scene and crowd simulation software was developed in order to program their movements. It was called Attila and it allowed these unique characters to move on their own. A variation of it called Dynasty was created for the final sequence in order to create a crowd of 3,000 outside of the Forbidden City. 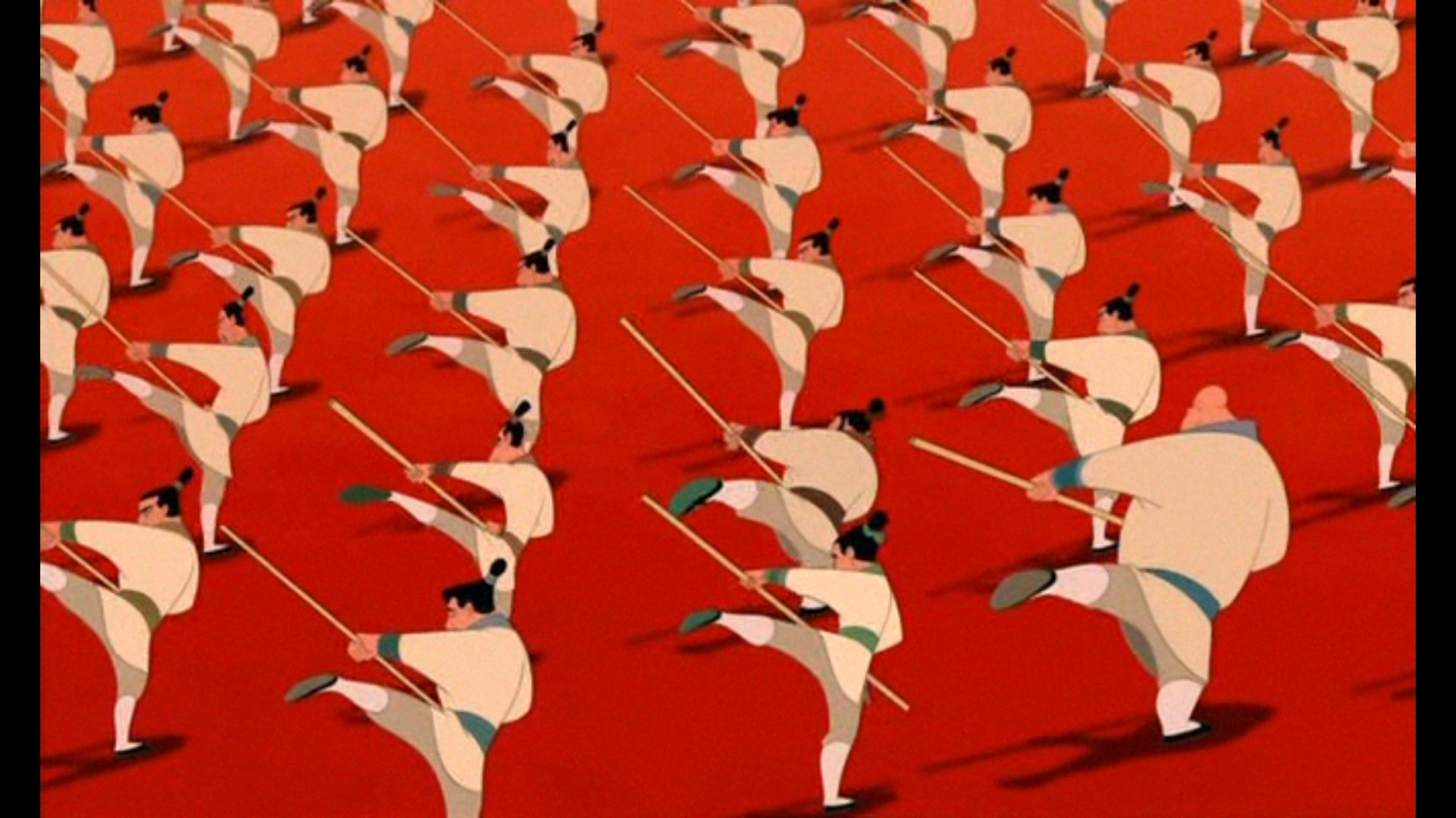 Ohhh, look at all the pretty crowd effects.

I can think of so many things I like about this movie but most of them start and end with Mulan herself. Mulan is so fantastic as a female lead. She embodies strength, perseverance and bravery. This is a young woman who literally has been told that her worth amounts to weather or not she can impress a man enough to marry her. Yet even with all that negativity, she gives up everything to go into a war to save her father. Holy crap. I like that Mulan has to grow so much throughout the film. She goes into this man’s world, not knowing anything about fighting or being able to hold a sword, but in the end she becomes the strongest of them all.

The strongest Disney heroine yet.

Best of all is that she and Captain Shang don’t just instantly fall in love with each other. You cannot even imagine how happy I was that the film didn’t end with a wedding or even a kiss. These are two characters who grow close purely based on a friendship and while there is a possibility of them becoming something more in the end, it is just that. He’s coming over for dinner, to get to know her, not to jump into a marriage with her. It feels like a much more grown up, real life world than so many fairy tales we’ve seen before. Also more true to life is how much work this hairdo takes. Oy.

I am not the biggest Eddie Murphy fan but he really does an excellent job with Mushu. I like that this is a character who is looking for redemption and trying his best to make his ancestors proud. Besides that point though, he is absolutely hysterical and definitely rivals Genie in a good way as funniest sidekick. This whole team gives a great feeling of strength which can come from anywhere so long as you believe. Not to mention that Mushu as the Black and White knight, atop the panda, makes me laugh hysterically every time I see it.

What’s the matter? Haven’t you ever seen a Black and White before?

If I have a complaint about this movie, it is definitely the villain, Shan Yu. Look, he’s got a good purpose and I understand his motives and all that. He’s threatening for sure and definitely has the evil look down. It’s just that after Frollo and Hades, he feels a bit boring. He’s not exciting or charismatic. He’s the least interesting part of the film. It’s easy to miss that he’s so insignificant because there is so much going on in this film, but at the end of the day, Shan Yu is easily replaced with any other villain and he ends up feeling a bit throwaway. A means to an end.

Quiet, I’m about to say one of my seven lines. I’ll need your full attention.

This is a particularly poignant script. The lines are so well thought out and so many of them have this deeper impact. “The flower that blooms in adversity is the most rare and beautiful of them all.” “A single grain of rice can tip the scale.” “The greatest gift and honor, is having you for a daughter.” Likewise, the dialogue is often laugh out loud funny. “I’ll get that arrow, pretty boy, and I’ll do it with my shirt on.” “My little baby’s off to destroy people.” “Make a note of this: dishonor on you, dishonor on your cow!” It’s easily one of the best writing jobs we’ve seen in this project. I also love how often characters flat out say how useless women are, only to find that their hero is a woman.

Say it again. Go ahead, make my day. Say that women are useless. So help me!

I’ll gladly say that Mulan was one of my favorite films so far in this series. It has great characters and finally, FINALLY, a female lead with more story line than simply falling for a prince. Mulan is the most complex heroine we’ve had so far and she shines with strength and beauty. I once said that if I had a daughter, I would tell her that Ariel was the last person she should aspire to be. I feel the complete opposite about Mulan. The fact that this is a character who has a happy ending without a kiss or a prince is the best and really goes to show that Disney is learning. We’ve gone to the Savannah, France, Greece and China. Next up, its the jungle as we approach a new millennium of Disney. Its always best to end with a group hug.