Vault Disney #24 – The Fox and the Hound

Remember when you were in grade school and you met your first real friend. Oh the adventures you two had. You were thick as thieves, two peas in a pod, The “Other Half” to each other’s “Friend’s Forever” necklaces that you bought from Claire’s. But then their Dad started hunting you and then your Mom left you in the woods but then you met someone and fell in love but then that bear came? Okay, maybe it’s not a perfect analogy, but sometimes friendship can be tough as we grow up. Such is the story of The Fox and The Hound, our next stop on the Vault Disney express. Toot Toot! All aboard. Next stop, “WHY CAN’T WE ALL JUST GET ALONG!” Yikes, my coffee isn’t really doing it today folks, but we need to focus because while The Fox and the Hound is not the wild thrill ride of The Rescuers or the deep philosophical masterpiece of Winnie the Pooh, there’s something special here, and considering the underlying current of change that occurred at Walt Disney Studios during its production, we’re lucky the film is so good.

We haven’t talked about the Nine Old Men very much, but essentially they were the main animators for Walt Disney Studios and the minds behind many of the old greats. From Snow White to The Rescuers, at least one of them was involved. However, with The Fox and The Hound, a new team of core animators arose and the old team handed off the animation to their successors. Luckily human beings are all about change so everything went great! Oh wait, no scratch that. Humans hate change. With the new generation of Animators and Directors coming in, things got a little hairy. These new minds are names that will soon change the world in our little project but for now they were just leaving the training program and hungry to get started. Names like John Lasseter, Ron Clements, Tim Burton and Brad Bird. All of them and more would finalize the animation for The Fox and The Hound but not before some initial turmoil.

That car is experiencing some inner turmoil, am I right?

With the old team and the new team at odds over how the story should go and what the animation should look like, Don Bluth, now famous for such films as An American Tale, walked out, taking 11 other animators to start his own company. Because of this loss, the film was pushed back from 1980 to 1981 for its release date. Yikes.

Also, Chief was aloud to live. So, I guess that’s a good thing.

Loosely based on the novel of the same name by Daniel P. Mannix, The Fox and the Hound is, at its core, a story of true friendship. A little Fox named Todd who has been adopted by an old widow, happens upon a hunting puppy in training named Copper and the two quickly become besties. When this film eventually gets remade, I’m sure they’ll take lots of selfies together. Things get a bit tricky though when it turns out that Copper’s master, Amos Slade, and his older dog brother, Chief, hunt foxes. Suddenly, Copper is being trained to help take down his best friend.

There is an overwhelming amount of cuteness in this film. All the animals are adorable, especially Todd and Copper. When puppy Copper gives his call for having found what he’s tracking, you can’t help but smile because it is so friggin adorable! Todd is the essence of lovable and even Widow Tweed admits that he’s so cute she can’t stay mad at him. He has quite a bit of charm to him for a little guy, but as we know with Disney, charm comes with rule breaking. Yes, Todd has a bit of a hard time staying out of Amos’ farm and this incites Chief and Amos to chase after the little guy.

Excuse me ma’am, but that’s not a baby. You do know that right?

Amos is a pretty disdainful character right from the start. Much like the hunters in Bambi, we are immediately swayed to hate guns and everything they represent. I think as a kid, this film was always a bit confusing as several members of my family are big hunters and this film was showing just how cruel they could be. Though it’s really all in the eye of the beholder. That being said, a scene in which we see the shed full of animal pelts is greatly disturbing and definitely paints hunting as ‘evil.’

Amos, you like dogs right? Well just think of foxes as orange dogs. It’ll be easy since THAT’S WHAT THEY ARE!

It’s interesting that I find myself saying this as I think I often complain of parts of these films lasting too long, but I really found Copper and Todd’s friendship to be too short. We are to believe that these two are best friends forever, but really they only hang out once or twice. Now sure, by their lifespan, it’s a long time, but the film is built around the difficulty of maintaining this amazing friendship and I just don’t feel like the friendship is established enough to make that work. I care much more for Todd’s relationship with Vixie because I felt like a lot more time was put into building their chemistry. I could see the two of them having a really hard time having to go against each other, but for Todd and Copper, it just didn’t seem like there was enough history.

Oh yeah, I forgot about this uncomfortable moment.

This might sound silly, but I really did like the film a lot more once Todd was in the woods. I like the cast of characters and I especially liked Vixie. I think there’s some beauty here to seeing just how happy animals can be in their own environment. But just a couple notes here. Why is Vixie the only fox in these woods? Why does Big Mama think they’ll get along? Because they are both foxes? That seems a bit like Big Mama is riding some stereotypes. How do Dinky and Boomer survive if they just spent the last year chasing the same caterpillar? I need answers!

Tale as old as time, song as old as…oh, you say we’re not there yet? Okay, moving on.

Speaking of which, there are a couple story elements that fall very VERY short for me in this film. One such is Dinky and Boomer and their hunt for the elusive caterpillar. I get it. It’s supposed to be some cute slapstick to break up the drama, but it’s just so…dumb! It really feels like a waste of time. These characters don’t fit into the main story and they just seem so extra, so added on top, so unneeded. The minutes spent on these two could be spent building the friendship between Todd and Copper even more OR, they could be spent on Widow Tweed, who I feel never quite gets a proper amount of story line. 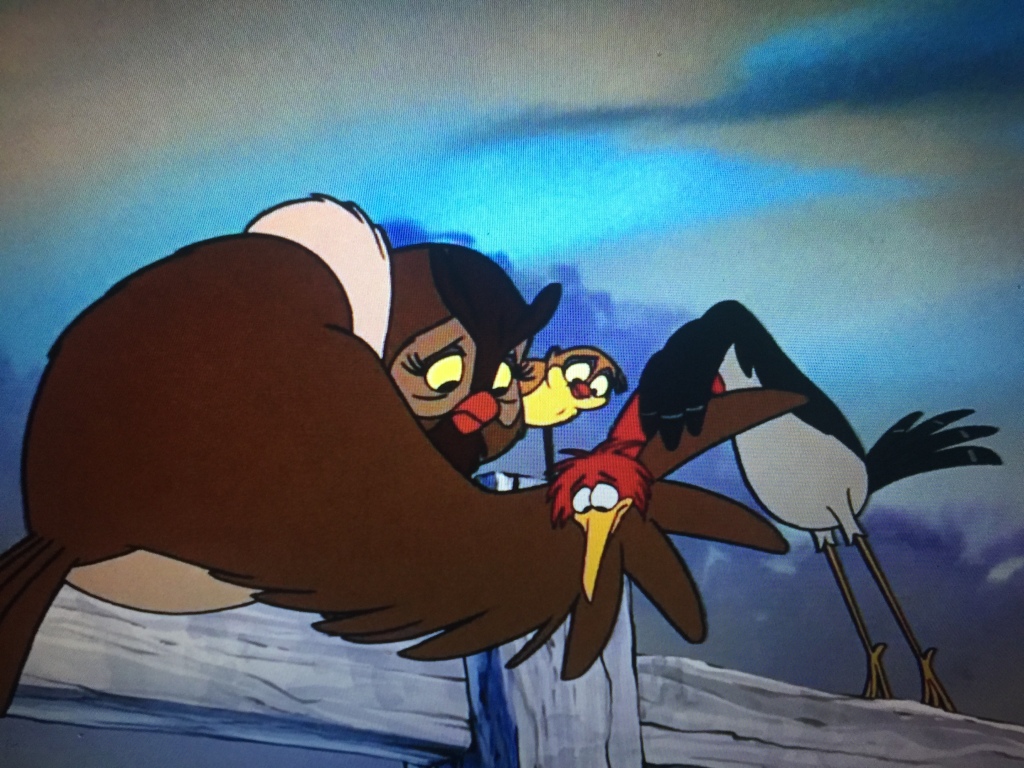 That’s my other complaint actually. Widow Tweed leaves Todd in the woods and then the next time we see her, she is caring for Amos. Okay, but that guy is an enormous jerk face! I get that this is Disney and we need to love thy neighbor, but this guy is bad people and you just gave up your pet so he couldn’t kill it AND THEN he tried to do just that, going against the law I might add. Now we’re just going to fix him up and laugh about all of it!? It’s not justified! It’s not the American way!! I know, I know, I’m going a bit over the top here, but it really is an overly optimistic ending that seems to pop out of nowhere.

I adopted a fox. Judging my decisions might not be the best. I’m an old lady after all! Wackadoodle!

Alright, I’ve complained about the story a lot. I do like certain parts, I do, it’s just that there’s a lot going on here that feel is a bit “meh.” However, there is something about this movie that I think redeems all of that. The animation is absolutely stunning. The movement of the animals and the way that the foxes pant as they run and the way that everything just feels so precise is spectacular. The film received quite a bit of praise for the scenes involving the fight with a large grizzly bear and rightfully so. These scenes are jaw dropping and really feel like we’re getting close to the Disney that I grew up with, the epic Disney, the everything the light touches Disney. The animation of this film marked the beginning of a new team at the studio and you can feel it in every line of the drawings.

Insert obligatory “You shall not pass!” joke here.  Hmm, that joke could be funnier.  How about “I just want to say “I love you” with a slap!”  Nope, still missing something, oh I know.  “Excuse me sir, do you have a moment to talk about our Lord and Savior Baloo?”  I can’t decide.  You go ahead and pick your favorite and we’ll call it good.

And for all of my whining about this plot point or that side character, the moment of Copper finally standing in front of the gun so that Amos can’t shoot Todd is perfect. It makes you want to grab at your chest in relief to know that Copper really could take a bullet for his friend, after everything. It’s deeply moving and really nails home the message of this film. Friendships shift and change. They aren’t stagnant, they are alive and we never know where two friends will end up. What’s important is that even if we grow apart, we still respect each other and remember what each other meant to us, even if that feeling has long gone. That is what makes The Fox and the Hound so dog-gon special.

No shots were fired in the making of this money shot.

The Fox and the Hound won’t go onto my favorites list at this end of this project, but that’s okay. For everything it gets wrong, it gets two things incredibly right and those are the parts that stick with us long after the film ends. The animation is stunning and the characters and message are strong enough to land when they’re needed most. While the ending might be a bit of a stretch, I think we all need a reminder that no one is truly good or truly evil and everyone deserves a second chance. Our friends might leave us now, but as long as we keep them in our hearts, what they meant to us and how they changed us, will always be a part of who we are.

Next Up: The Black Cauldron