When last we explored the city, we had just left The Disney Store and we were full of warm Disney cheer.  Our next stop would be The Nintendo Store, which is located just South of Rockefeller Center, where the hold the Tony’s and Academy Awards every year and home of the Rockettes.  It is just a short walk East of Times Square and is in a much less crowded area so it seemed like a good bet.

We made a friend.

I haven’t talked a lot about Nintendo on my blog so let’s get my relationship with the brand out of the way first.  At a very young age, my first encounter with a video game system was an old Nintendo Entertainment System that had been passed down to me.  The very first game I would play on this little system was one that I would instantly fall in love with.  I wanted to solve every puzzle, find every secret and of course, save the princess.  I am talking, of course, of The Legend of Zelda.  Shortly after, I would play the original Mario, and while I wasn’t great at it, I still enjoyed it and Duck Hunt, which it came with.

I remember the year that the Nintendo 64 came out.  I was entranced every time we would pass by a console inside of Target or any other electronic store.  I knew, however, that I would not own one for some time.  We didn’t have a lot of money and my single mother was doing her best to keep food on the table.  I know, it sounds like a bit of a sob story, but we just didn’t have a lot of money and I understood that.  Christmas morning came around and I unwrapped a Nintendo 64, which my whole family had pitched it to get me.  There’s a youtube video of a kid feaking out over his Christmas presents and that was me.  This would solidify a life long love for games, but specifically Nintendo.  I’m a fanboy.  What can I say? 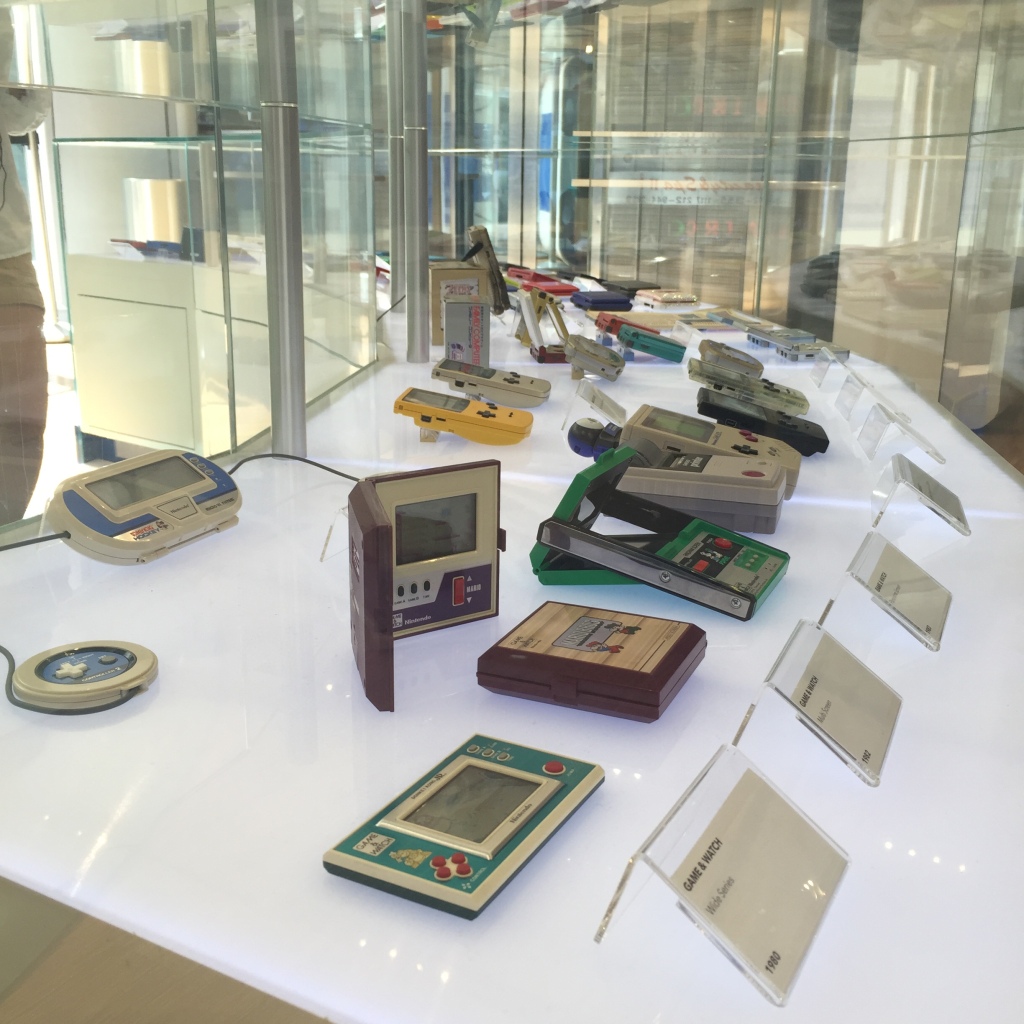 A fan from the start.

Upon entering the two story Nintendo Store, you’ll find that there is a lot to see in this little store.  The bottom floor is mainly dedicated to the Nintendo Handheld line.  Currently, that means the Nintendo 3DS.  There is a whole lineup of them with plenty of games to sink your hands into.

And to your right, you’ll find games!

As you peruse the bottom floor, you’ll also find tons of shwag and a really cool setup in the center of the room where kids can sit and try out 3DS games.  I’ll also mention here that the whole store is super brightly lit and has a very warm inviting feel to it.  The staff is also great and often comes up just to ask what games you are playing at the moment. 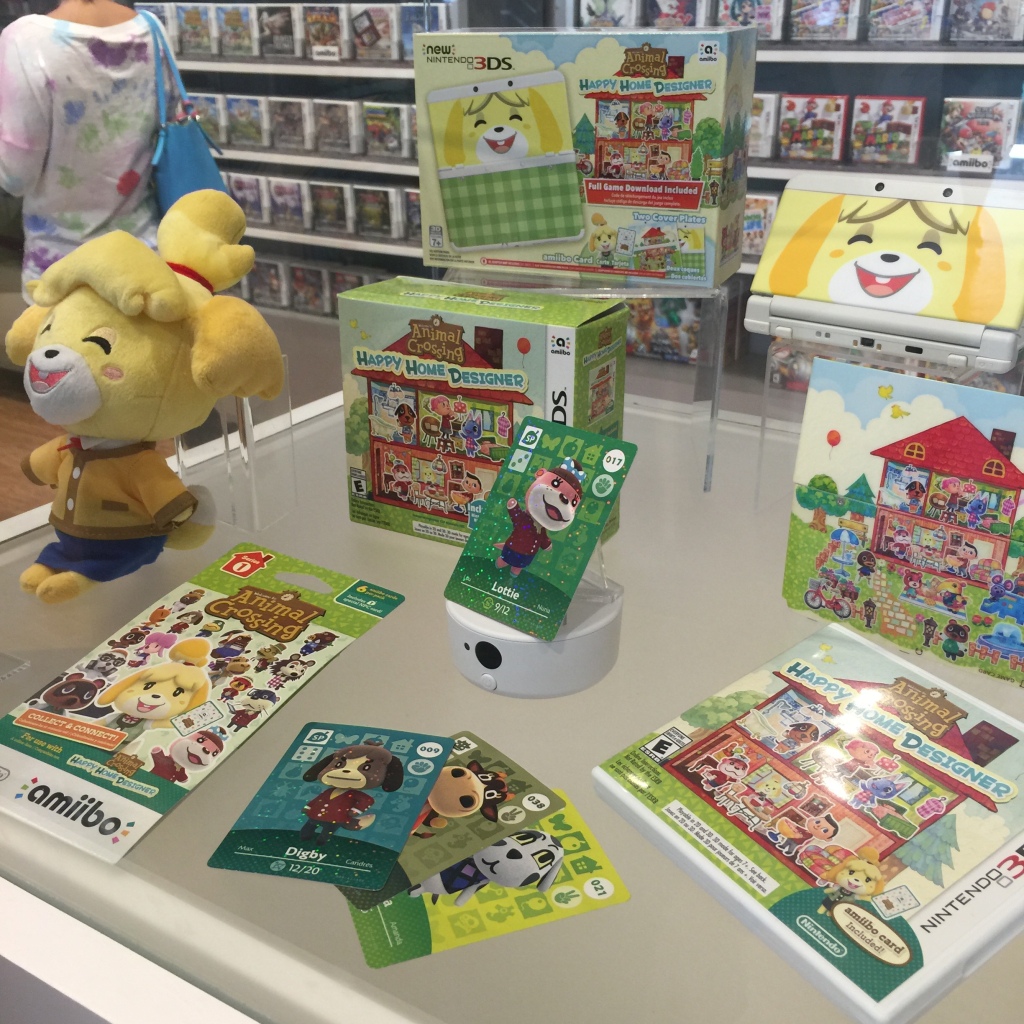 We went into the shop just before the new title Animal Crossing: Happy Home Designer launched, so there was a lot of buzz.

There are a lot of plushies to buy here.  If there is a character you are dying to snuggle with before bed, it is probably going to be on the shelf somewhere in this store.

For me, that character was Pikachu. Always and forever little buddy.

Eventually, though, you’ll yearn for more.  Your eyes will call you to the second floor.  What’s up there?  Is K.K. Slider waiting your approach with a hip new jam?  Is Captain Olimar waiting to assign you a mission?  Is there a sale on Pokemon cards?!  We ascended the stairs and were greeted by a very happy, and big, Donkey Kong.

This ape has a funny face. DK. Donkey Kong is here!

The second floor is where a lot of the historical parts of Nintendo are, as well as their home console lineups.  We were fortunate to go in just after the release of Super Mario Maker, so there was a lot going on and several demo units to hit up.  Carl took a stab at one.

But quickly realized that he didn’t quite know what was going on.

My favorite part of this store is the displays that feel a bit like a museum.  They change every so often and really provide some neat insight on different Nintendo franchises.  On our visit, there was a very cool display on the current hit game, Splatoon, a game all about squid kids shooting ink in order to cover more turf than the other team.  It sounds a bit crazy but so does saying a game is about a plumber who eats mushrooms to grow bigger and shoot fire at a turtle dinosaur who stole his princess.

Does WordPress give a badge for first panorama photo used in a post?

We spent a lot time reading through this display, which was filled with all sort of designer stories, concept art and cool images from the game.

Also, there was this hat.

This store oozes personality and while it doesn’t throw as much of it at you as Disney, it still feels like a Nintendo nerd’s dream.  There are little details all around, if you only stop to notice them. 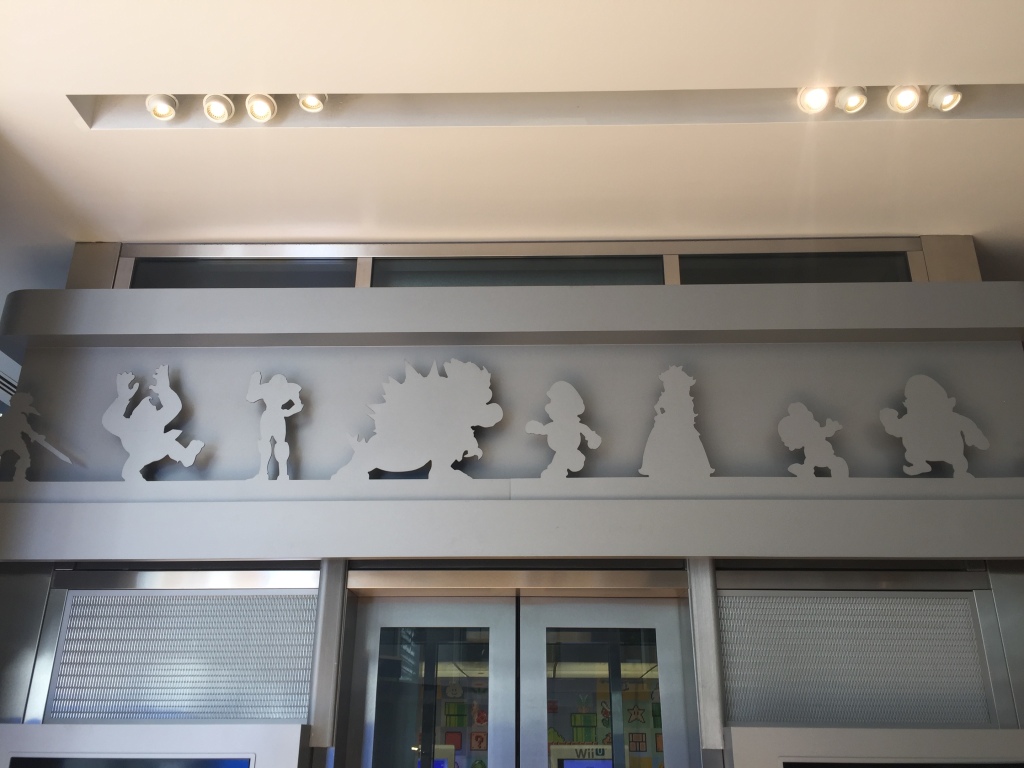 They also have a pretty epic display case which holds a single copy of every single Amiibo released to date.  Amiibo’s work as toy figures which can be used in certain games to unlock extra content and are highly collectible.

Their Amiibo collection is better than yours.

I also like that they frequently change up the displays in order to keep you coming back.  I always see something new or learn a new piece of Nintendo history when I visit the store, and you guys know how I like me some nerd history. 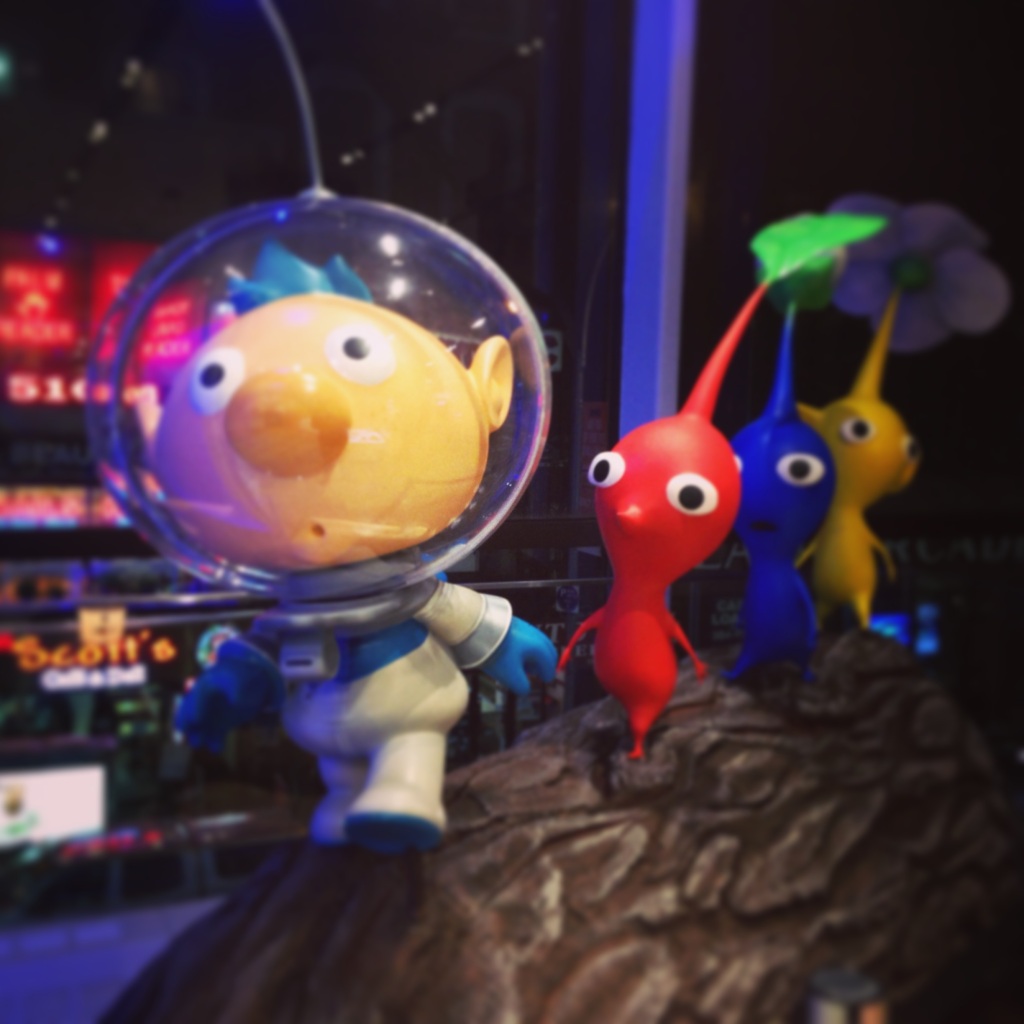 Captain Olimar, greeting us on an earlier visit.

Oh God, and the Pokemon!  There are so many Pokemon that I just… no Carl, that is not a lobster.  Carl! 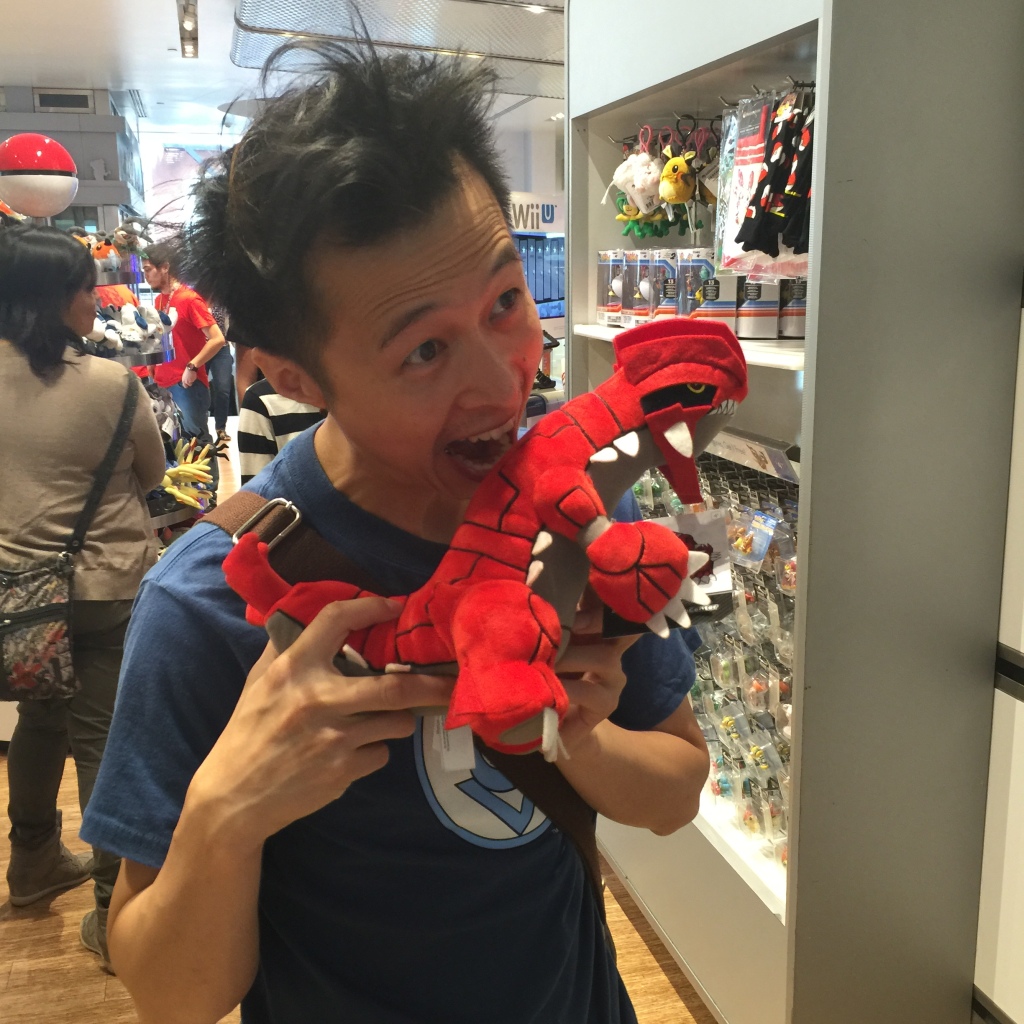 Just put that down and don’t…wait!  Stop fighting with that!  It did not start it!  I saw the whole thing!

Goodness gracious, can’t we all just get along?

Ahem, The Nintendo Store is a must stop and shop for any nerd ever.  It is super fun and family friendly and for a rather small store there is a ton to see and do.  The staff is great and the area around the shop is not too chaotic so getting there is a breeze.  You can even go check out Rockefeller Center afterwards.  Just make sure to wave goodbye to your friendly neighborhood mushroom and sewage pipe.

So how about it guys?  What is your favorite Nintendo franchise and why?  Let me know in the comments down below!