When we started this journey together, I mentioned that there would be films along the way that I had never seen before. That’s not to say that I didn’t know of The Rescuers before this viewing, but I had never watched it in its entirety. My partner Carl was thrilled that this would be our next as he recalled loving this film as a child. The Rescuers was a huge success upon its release. It broke records for box office sales of an animated film. Many believed the movie marked a second golden age for Disney. With high expectations, I sat down to watch a story about two mice, one a janitor, one a Hungarian diplomat, both belonging to the Rescue Aid Society. What’s impressive about The Rescuers isn’t simply that it is a stellar film, but also that it is one of the first Disney animated films to truly follow traditional story structure and do it with a huge amount of style and and an even greater amount of fun.

Ummm, do you want me to leave while you do that?

There is a LOT of history behind this one so bare with me. Production originally started way back in 1962, with a draft of the script, loosely based on the book by Margery Sharp. The script was set in Siberia and centered around an imprisoned poet but as production continued, Walt Disney found that he didn’t like how political the story was becoming and stopped work on the project. It wasn’t until the early 70’s that now famous animator Don Bluth reinvigorated the idea and the script. Disney had originally planned to cycle their films, release one large budget film, followed by a smaller one, going back and forth in this way to be constantly releasing films but without losing money or resources. Don was working on a version of Rescuers which was set in Antarctica and dealt with a performing bear who was imprisoned. The bear would be voiced by Jazz singer and popular musician of the time Louis Prima. Sadly, Prima discovered in 1975 that he had a stem brain tumor and left the project. The whole thing was scrapped. 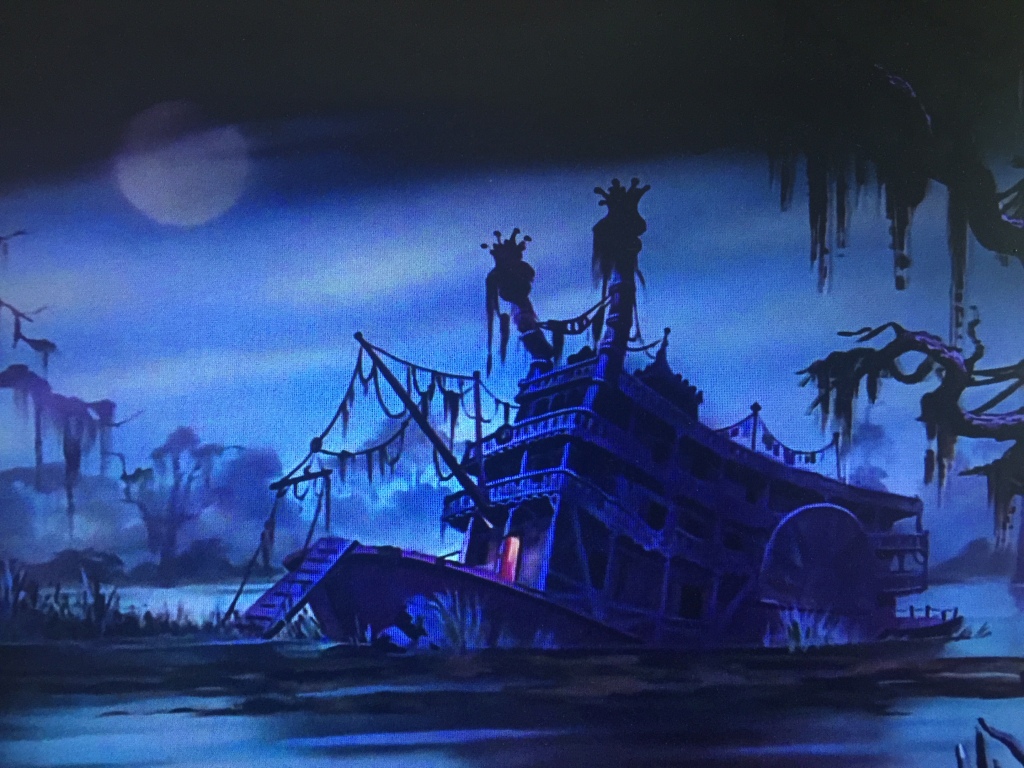 While Rescuers was meant to be the lesser budgeted film after Robin Hood, as production on Robin Hood finished, the studio was looking for a new film to green light and between Rescuers and the unreleased Scruffy, Rescuers was chosen. The arctic setting was dropped, the animators believing it was too dark a setting.

Pssst. This whole thing is a bit confusing.

For a time, Cruella De Vil was suggested as the villain of the film, but many felt that making The Rescuers a sequel would not hold up well and was not true to the original film so Miss Bianca, the diamond thief, was created. Miss Bianca does share a lot of similarities to Cruella but she was actually based on animator Mitt Kahl’s ex-wife who he thought less than highly of. In creating her, he was extremely careful with every detail. It would be his last Disney character before his retirement and he wanted her to be his best. In fact, he ended up animating her almost exclusively for the entirety of the film.

In another Dimension, she’s holding a dalmatian in this picture.

I could go on and on as the history of this film is so rich and wonderful but I’ll end with Mr. Snoops. Based on the character Mandrake from the books, he was actually modeled after animation historian John Culhane. Culhane believed he was often tricked into having several varied reactions so that the animators could draw him. Imagine being surprised and scared just so someone knows how to draw you when these are your emotions. In the end, he admitted that becoming a Disney character was a dream come true for him. And right it should be John. 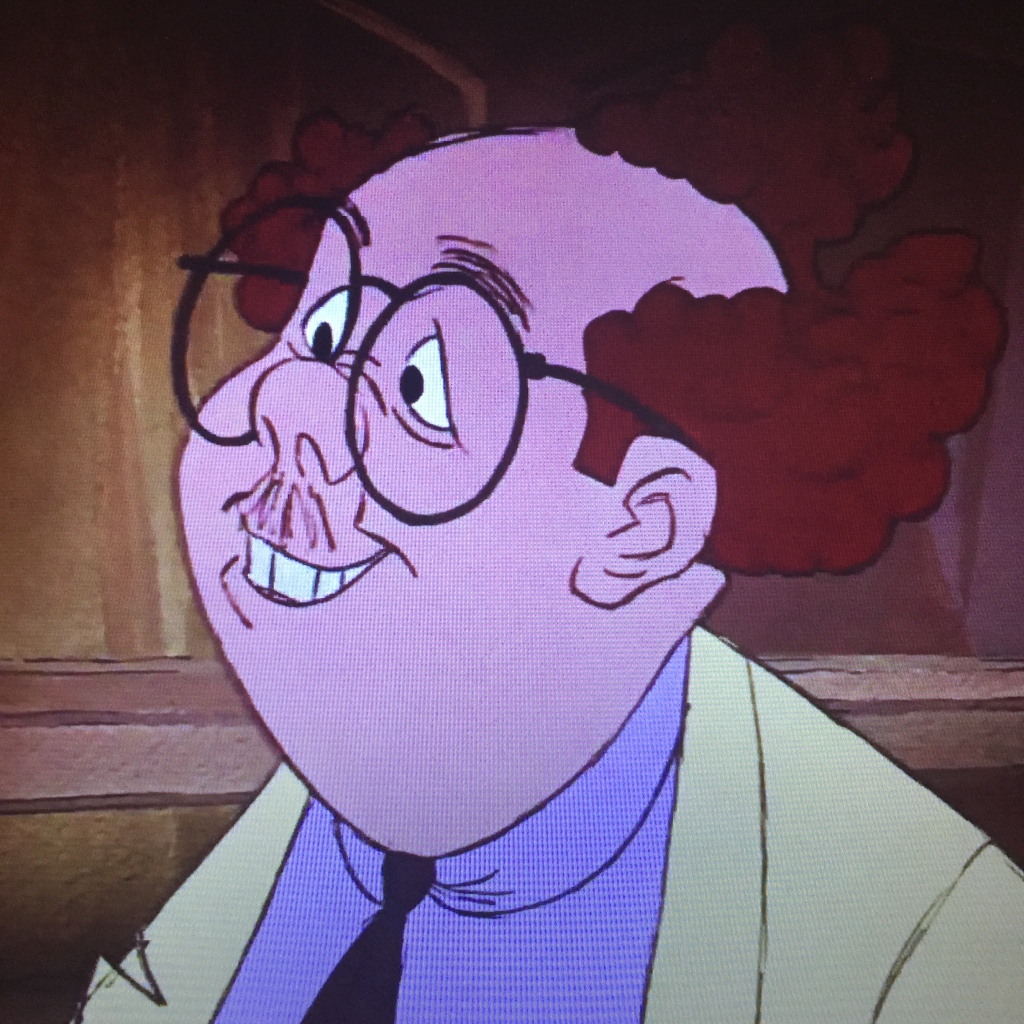 A dream second only to a full head of hair.

The Rescuers definitely feels like a leap forward, not necessarily from an animation perspective, but absolutely from a story standpoint. There is a very clear beginning, middle and end and most importantly, our protagonist Bernard, must actually overcome something within himself, his fear of everything, in order to come out victorious. Before, often times the hero gets their happy ending through no means of their own, but here we see that Bernard actually has to overcome something in order to save Penny and win Bianca. It’s a great story of big things found in small places.

There is also the overcoming of being stuck in this bottle. We are still not sure his escape is physically possible.

Bernard sort of gets roped into things. After all, he starts out as a janitor for the Rescue Aid Society. By the way, side note, Rescue Aid Society is sort of a silly name. Can we just agree on that and move on? Okay, perfect. Bernard simply goes into the bottle which Penny has thrown overboard to get help and then is asked by Bianca to accompany her on the mission. Clearly Bianca has a thing for the working class. I really like Bernard though and I identify with him. He’s cautious and paranoid and worried that everything will go wrong so he constantly avoids taking chances.

Bernard, you seem less than thrilled to be in that boat.

Miss Bianca, on the other hand, is ready to take chances and face adventure. She even admits to running red lights, because why wouldn’t you do that in New York City? Oh right, you wouldn’t because you would die. Also, I don’t really know how Bernard expects Orville, the albatross, to stop at a red light mid-flight. He barely took off and now you want him to stop again? Bianca is actually one of the best leading ladies so far. I like that she’s head strong and sure of herself. She knows what she wants and goes for it. You go girl.

The Rescue Aid Society only enlists the most stereotype of stereotypes. The creme de la creme of the meme de la meme.

Ahem. Speaking of Orville. What’s not to love about this ridiculous bird who apparently makes a living by flying small animals across the country? Orville’s take off is one of the most overdramatic, crazy parts of the film and it’s hilarious. Originally, Orville was meant to be a pigeon but when one of the animators brought an episode of True Life Adventures to the team’s attention and showed them just how crazy an albatross’ take off can be, the choice was made to change Orville. Riding on Orville also proves to be one of Bernard’s first true tests of willpower and really makes him face his fears early on. Of course, he does this because Bianca tells him to, proving the age old lesson: Men are easy to manipulate.

Fly on the back of the bird they said. You won’t be terrified the whole way they said. THEY LIED!

The real star of the film though is Madame Medusa. She’s crazed and over the top and while different than Cruella, she shares many of my favorite similarities with the character. I love Medusa running around the boat house with a shotgun unloading without a care for who she might hit. She drives like a maniac and all her movements are crazily over exaggerated. Her two alligator pets, Brutus and Nero are extremely imposing. In the book, these two were actually bloodhounds named Tyrant and Torment, but I think the alligators really nail home the power of this woman and just how scary trying to run away from her might be.

There are a lot of great characters in this film with small side rolls. From Rufus, the elderly cat at the orphanage to Evinrude, an adorable dragonfly who uses his flying speed to zip around a little leaf boat on the water. Even Penny is pretty cute, if not a bit annoying as little kid characters can often be. I do like that she has some guts to her though. She runs away and fights for her teddy bear despite her adversaries being a crazy woman and her two alligator pets.

Alright, if you know anything about The Rescuers, you’ll know that there’s a controversy here. And if you know anything about me, you’ll know I HAVE to talk about it. Three days after the film’s second release on home video, it was recalled. Why? Because in one frame of the film there is a picture of a topless woman in the background. As many of you will know, this was the start of a long line of hidden images and sexualized messages in Disney films which led to equally upsetting recalls. It’s curious how this was even found as you can’t even see it watching the film normally. The frames simply move too fast. When the film was reissued, the image was taken out. Think of the children!

Obviously, this being a family friendly blog, I won’t show the image. Instead I have included my reaction to hearing of this story.

The Rescuers is a delightful adventure and gives us some great characters who grow and evolve throughout the film, making their victories that much more special. Bernard and Bianca are a delight to watch fall in love with each other and all the supporting cast is fun and engaging. Madame Medusa, who feels a bit like a forgotten villain compared to others, is just the right kind of crazy and really gives the heroes a run for their money. The Rescuers was so successful in its initial run that it went on to be the first Disney Classic film to get a sequel, but obviously, we’ll get to that in due time. For now, take heart in knowing that the Rescue Aid Society is out there even now, protecting and serving, one mouse investigator at a time. 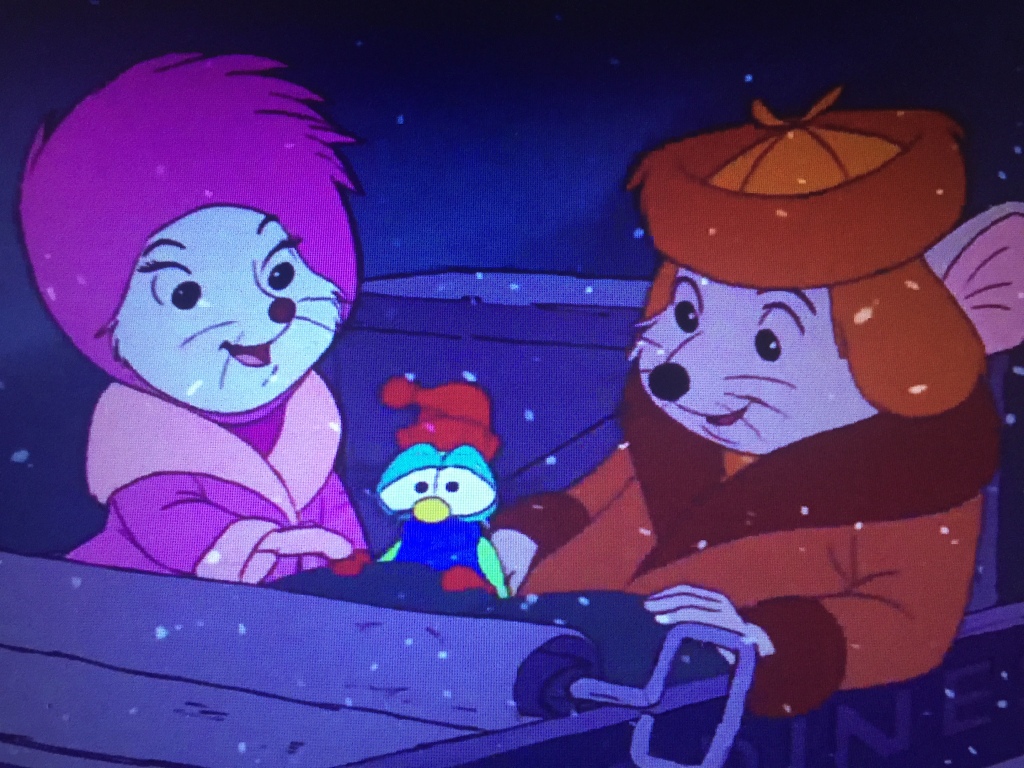 On to the next mission!

Next Up: The Fox and The Hound