The Magical Land of Magic Land

When I was a youngster, I didn’t have just one imaginary friend, I had a vast network of them.  They all lived on a magical island, my grandmother’s backyard, and our adventures were endless.  Sometime in Middle School, I decided it was time to put pen to paper and turn this fantastical story into something real.  I filled notebooks with notes and began to write the story.  I had teachers read it and they all knew me as the boy who was writing the book.  Sadly, as with many things when we are young, I gave up on this multi-book epic that would have eventually gotten me a movie deal in order to make time for what was really important, High School drama.

Recently, I had the good fortune to come upon these notes while moving to my new home and now I have the unique opportunity of recounting this tale from my youth, with the eyes of my current self.

The story was originally conceived of by my first grade self as a ten movie series.  I recall telling my uncle that each movie would be five hours long,  I had a very Peter Jacksonian view of how to tell a story.  The story began with a character named Jason, cleverly spelled differently to throw off the reader, and his friends Will, Thomas, Ramie and Rachel, all getting a chance to go on a cruise together with Jason’s grandmother.  Unfortunately, as happens with these things, the cruise goes on the wrong path and is caught by a massive storm which destroys the boat and kills everyone with the exception of Jason and his friends.  Even then, I was aware that boats and water were the source of all bad things in the world.

They washed up onto an island and while walking along the beach, discovered a cave filled with what I described as “rock versions,” of different figures along with some dinosaurs and ancient sloths.  I recall really being into ancient sloths at one point because they were so much bigger than present day sloths and were thusly cute on a much larger scale.

Anyway, Jason, who I noticed in this story is particularly good at making problems for the other characters, touches one of these figures and makes the whole cave light up like Christmas.  Suddenly all the cave creatures come to life as light particles and shoot out to their respective parts of the island.  In fact, the whole island comes to life with prehistoric whatnot at this point in the story.  Apparently it was dead before?  Who knows?  Let’s continue.

I think it is important to note a few things.  The first is that I was extremely obsessed with dinosaurs as a child.  I made my mother take me to see Jurassic Park seven times in theaters and often corrected my teacher during the dinosaur portion of our yearly studies.  This brings up a good point.  Why do we stop having a ‘dinosaur part of the year’ at all? I think it could really have improved my Senior year of High School. 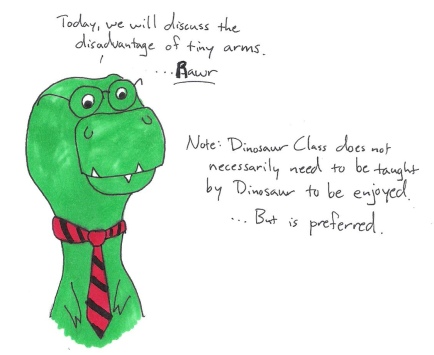 The second thing to know is that when imagining these stories as a little guy, I would use my hands to play the other characters of the story.  Therefore, as I try to illustrate the characters, I will also try my best to show you the ‘hand’ version.  I’m all about the authentic facts here.

Jason and friends eventually travel to a small hideout in the forest where they meet up with a rogue batch of creatures which are hiding from an evil warlord on the island by the name of Carnivorous.  I’m guessing I learned the word Carnivore from my dinosaur studies and was really impressed I could spell it.  Carnivorous looked something like this.

The creatures we met were Toby, Fickle and Martin.

Toby was a small monkbird, six year old me’s words, not mine, with a sassy attitude and as I recall a very obnoxious voice.  You know that character they put into every kid’s movie that’s supposed to be funny but usually comes off as obnoxious and is usually voiced by Eddie Murphy?  That was Toby.

Fickle was a kind hearted dragon snake who was Toby’s best friend.  They were probably my first ever gay influence in the world, with the exception of Burt and Ernie.

Martin was the Splinter of the group, old and wise.  He was a pumather.  Why that combination of letters?  I have no idea but I do know that I didn’t really know what he looked like outside of hand form until I decided to write the story down in middle grade and was forced to put a face to a name.  Spoiler alert, this character dies pretty early on.

This bunch of rebels helps to train Jason and company and then they all embark on a grand journey to the other side of the island to fight Carnivorous and his minions, all the while encountering massive birds that can be ridden, dinosaurs that are only ever aggressive and a surprisingly large quantity of oversized sloths.  I really liked those prehistoric sloths.  They are, of course, successful and it all continues for another ten movies/books and, if my calculations are correct, another forty-five hours.

What happens to our creativity?  At what point does it become unacceptable to play make believe?  Make believe stimulates the mind and allows us to express the confusing world around us.  Surely we could all use a little magic flying friend and a crazy talking panther when we go through a rough breakup or have a bad day at work.  Maybe, despite everything we’ve been told, a little imaginary friend now and then might do us all some good.  After all, no one ever understands us quite like our imaginary friends do.  Sure, we try to fill that empty void with psychologists and talking to strangers while drunk but maybe we could all use a little imaginary therapy once in a while.

I’ve taken it upon myself to, when I am stressed, close my eyes for a moment.  Instead of imagining a quiet place, I imagine a place of magic and wonders, a place where animals talk and where there is a world that needs saving and I am the only one to do it.  A world where I am the hero and my friends come to my aid as we fight off evil.  I find that vanquishing foes and working with others is a much better use of my imagination than a deserted island where I sit and breathe deep breaths.  I breathe enough without visualizing it.  What really gets me to relax is adventure and I urge you to do the same.

If it all fails and you find that adventure is not for you, don’t worry.  I have a plan B.  Just imagine the most adorable sloth ever.  I promise, it will all be okay.

Special Note:  This blog was done as part of a weekly writing prompt I do with Carl Li and others.  This week, the prompt was Make Believe.  Check out Carl’ls blog here.