After much anticipation, Maleficent has finally waltzed her way into the Kingdom and started cursing things!  It’s as if my Mom has come to visit and is staying for a week.  Get out of my kitchen Mom!  Where were we?  Oh yes.  Maleficent.  Today we’ll be going over the basics of Chapter One and everything you need to know for the event so far.  In the weeks to come, I’ll also add new posts as things get more intense and the curse spreads.  So what does Maleficent have in store for us today?  Let’s take a look! 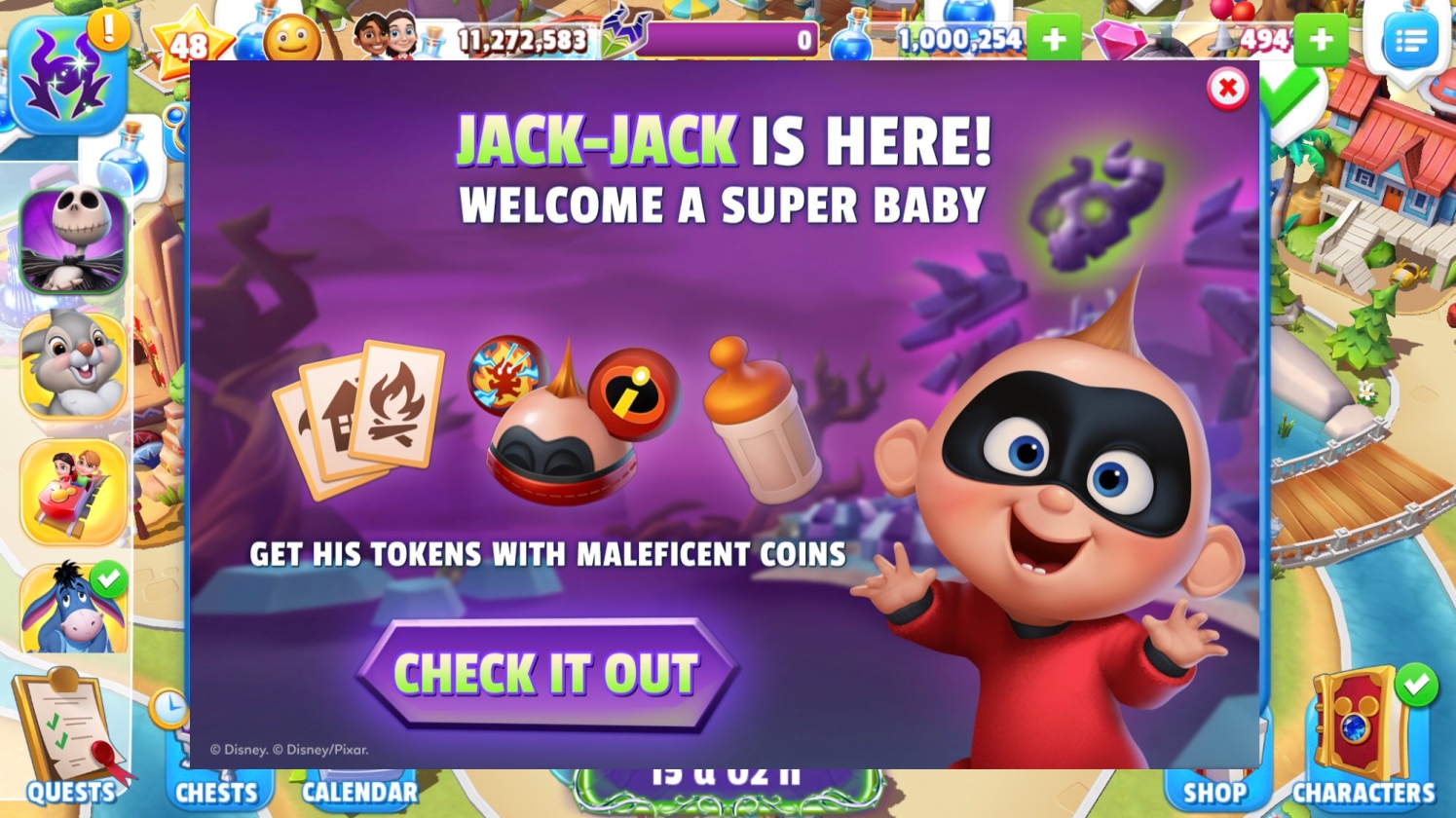 As soon as I logged on, I was greeted by Merlin, or should I say Debbie Downer. 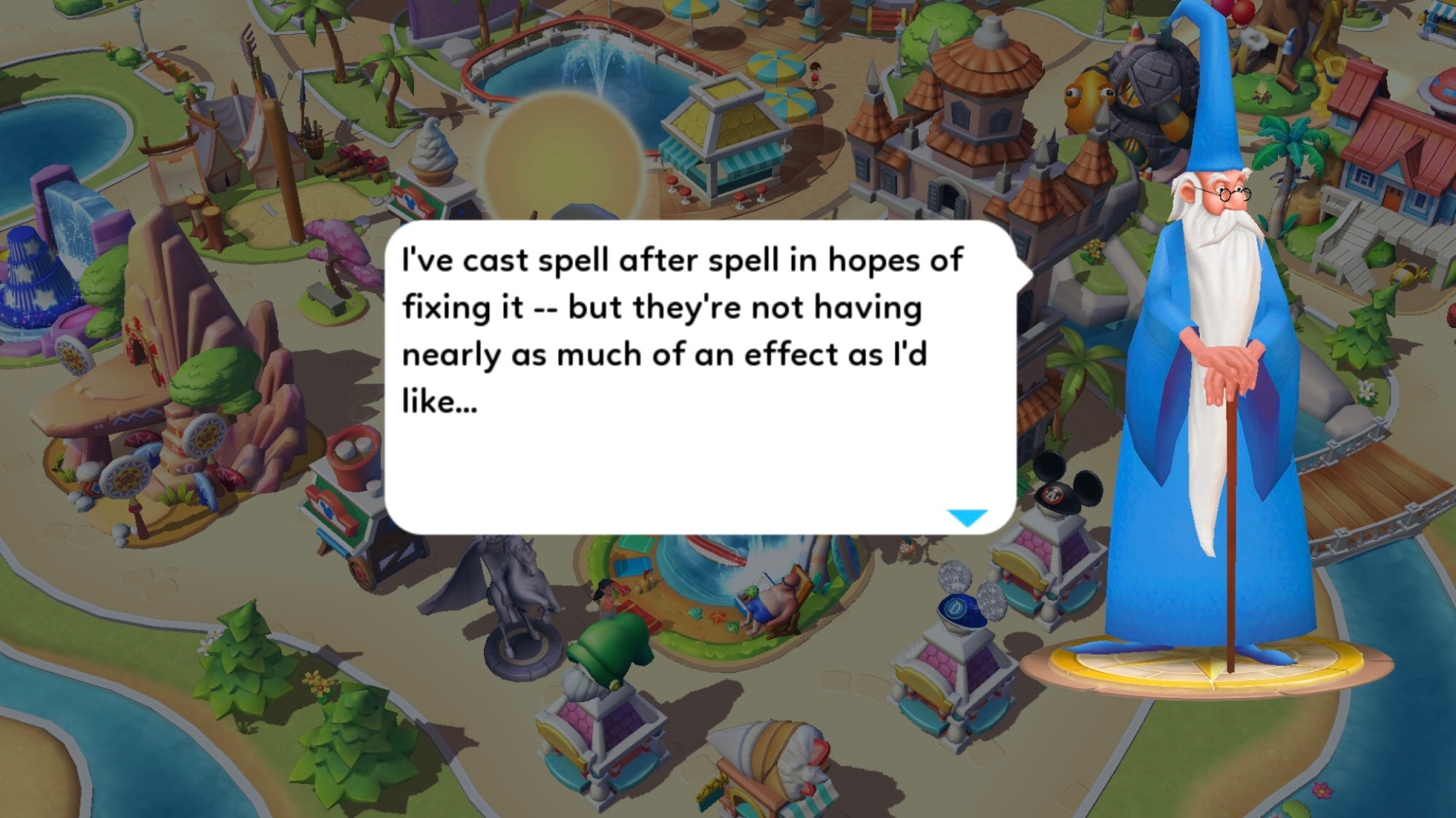 Though, he has every right to be worried, as Maleficent herself shows up to create a thunderstorm.  Huh.  I can’t help but wonder if Maleficent has also been cursing Florida this past couple of weeks.  Just to be on the safe side, I’ll make sure to tap on every building I see on the way to work today.

This time around, Maleficent has a plan to transform everything into a place of Nightmares.  In other words, our Kingdom will soon look like Brooklyn.

So far I am only three quests into Jack Skellington’s questline for this event.  Each of the three has been 2 hours long.  The first was just for Jack.  The Second was for Jack and Sally and the third is for Jack and Oogie.  Please note, I used some gems to speed things along to see how things progressed. 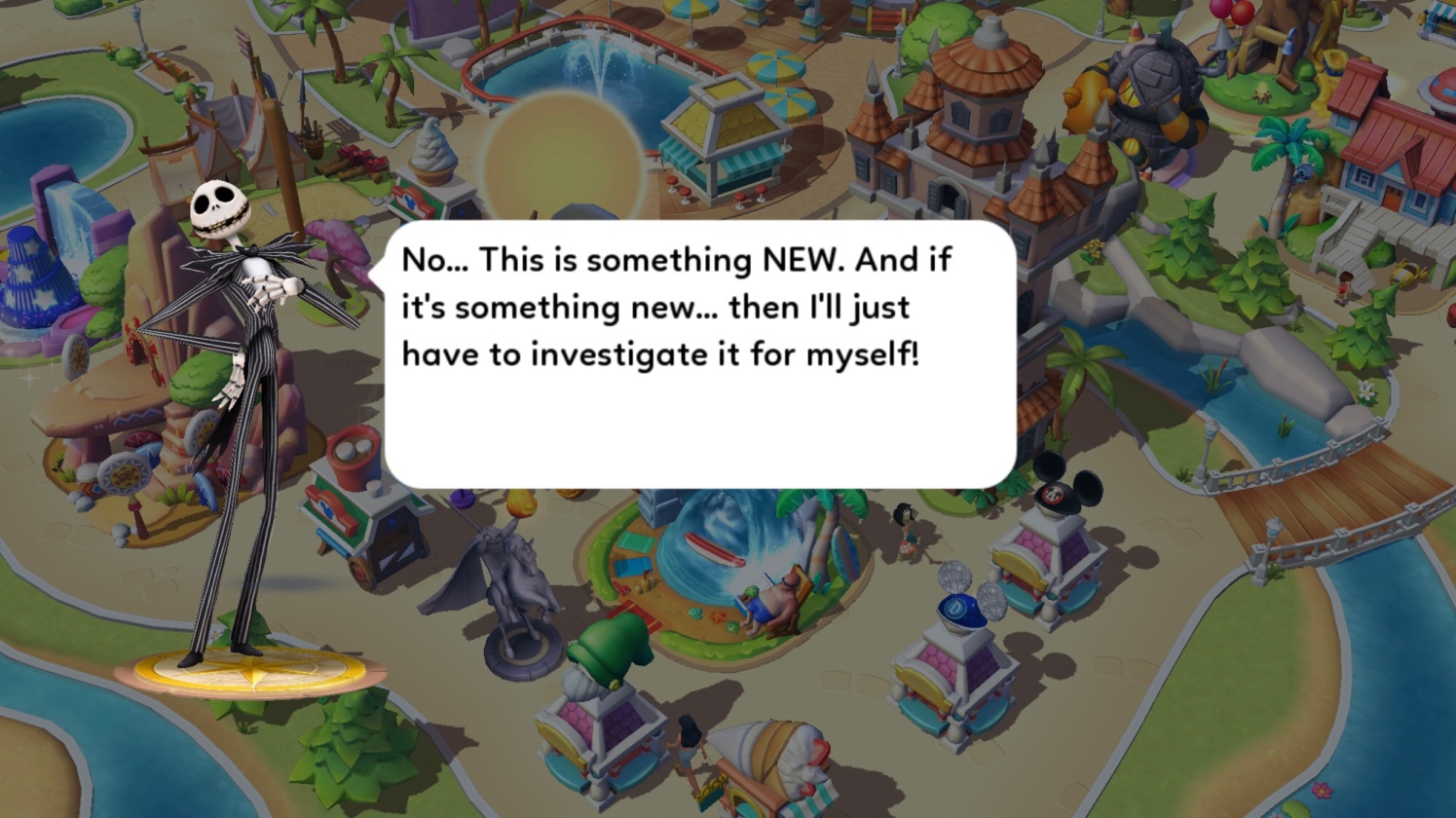 Each of his quests will drop Maleficent tokens as well as refreshing cookies and cocoa.  We’ll get to why those are important in just a moment. 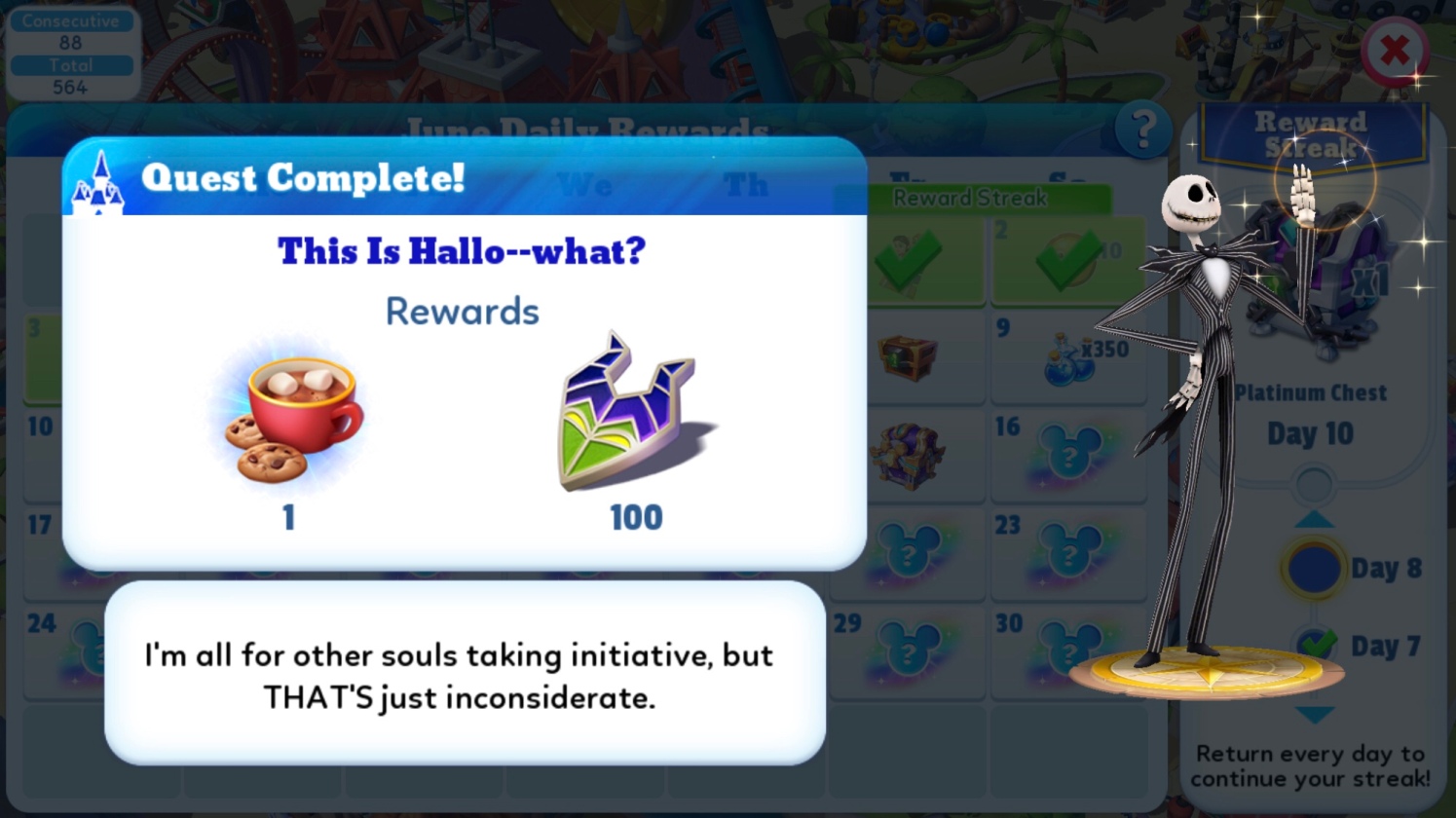 I was also gifted with a few extra cocoa refreshers just to get me started!  Thanks Gameloft! 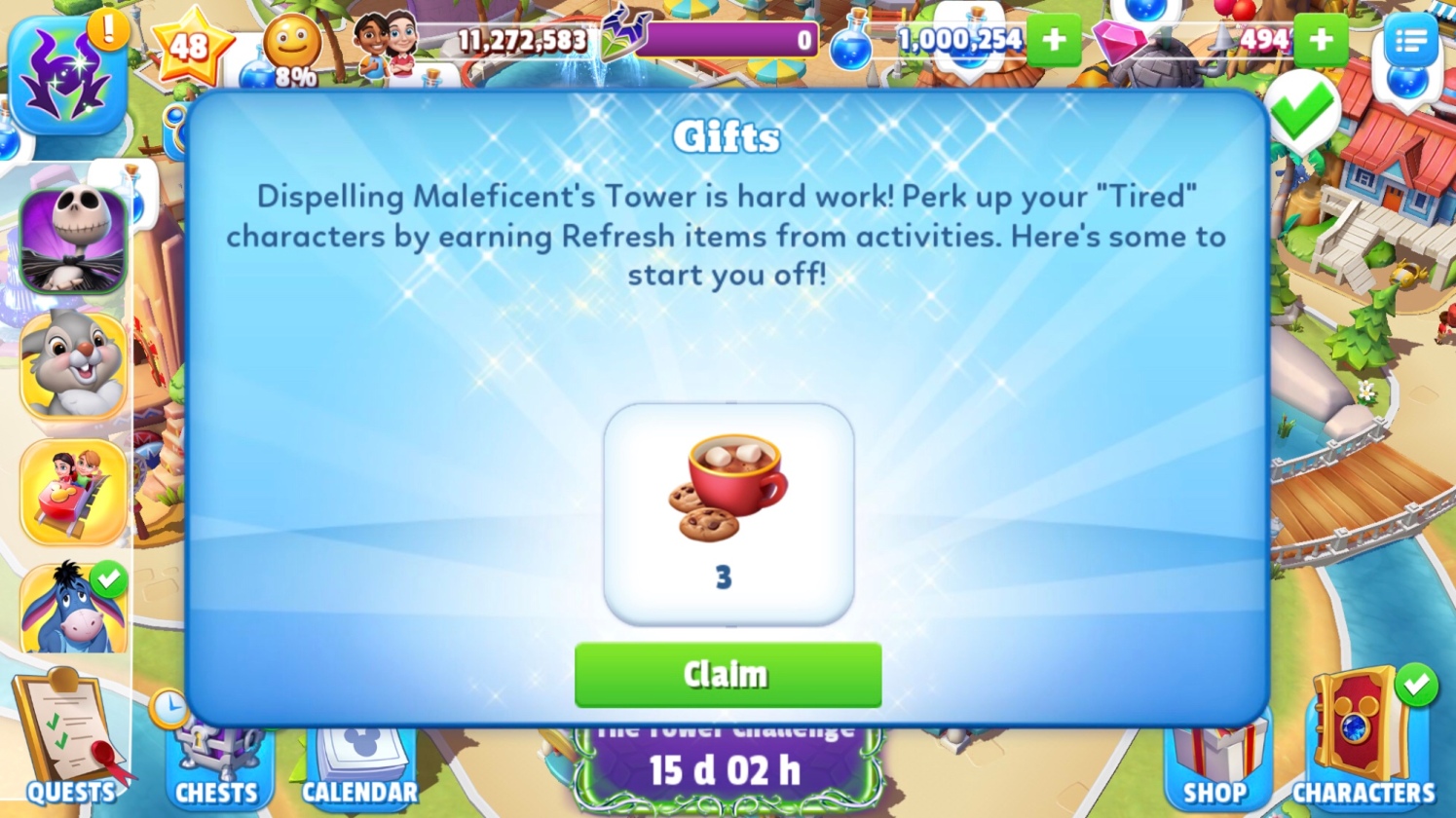 How the Event Works

There have been a lot of questions in regards to the event, which makes me very happy that Gameloft has created a wonderful tutorial.  We’re going to slide through this, and hopefully clarify everything to its fullest.

The main piece of the event is the Challenge Tower.  You can enter this by clicking on the tower where Maleficent is brooding.  This will give you lots of information about the event. 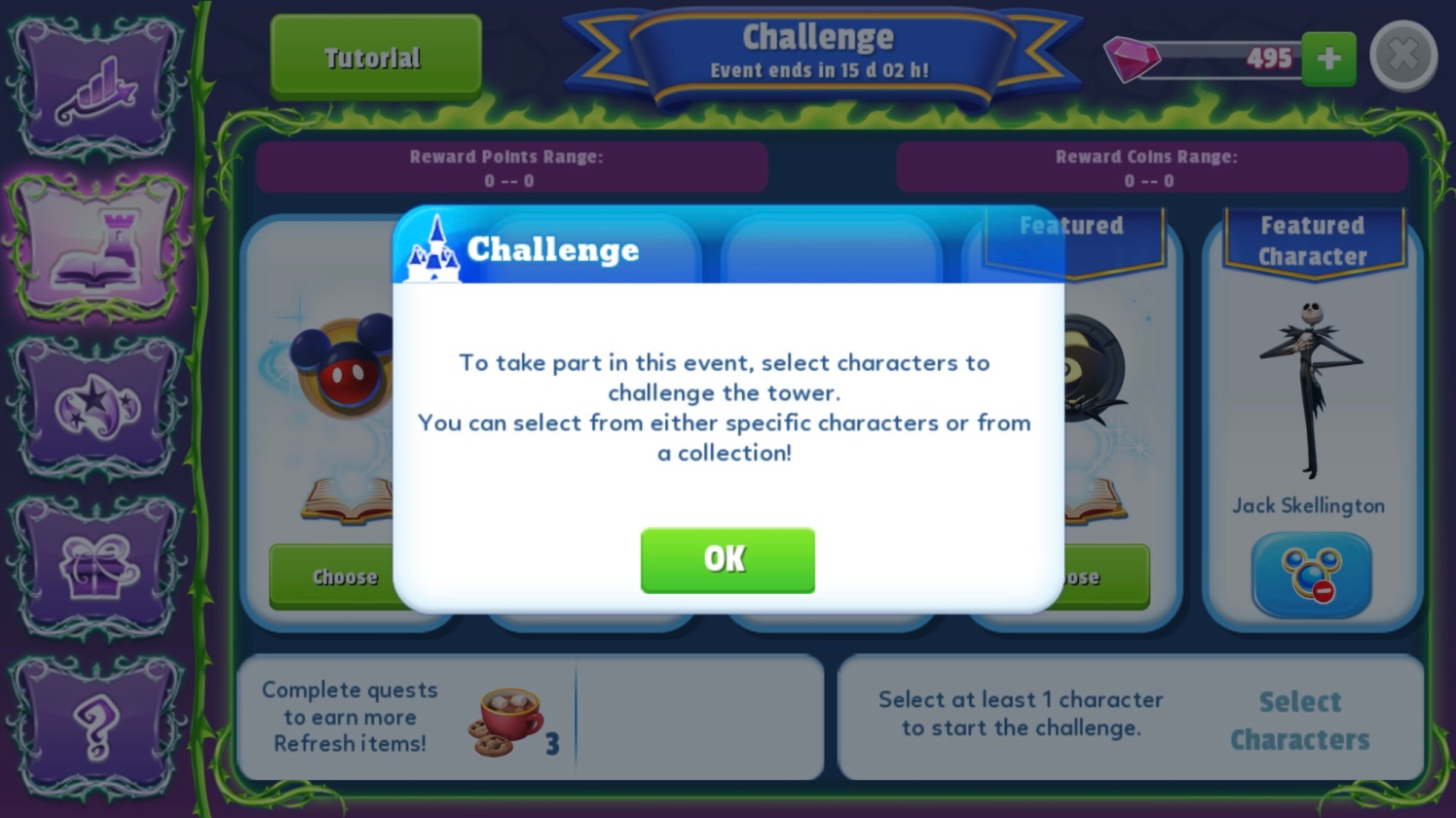 In the Challenge Tower, you’ll be able to send characters from different groupings in the Kingdom, or as Gameloft calls them: IP’s (Intellectual Properties).

To do this, you’ll select CHOOSE under each one and pick a character.

This will give you a menu of characters to choose from.  Select the one you want to send.

Once you are sending all the characters you want, hit Start Challenge.  The Challenge will last for 2 hours. 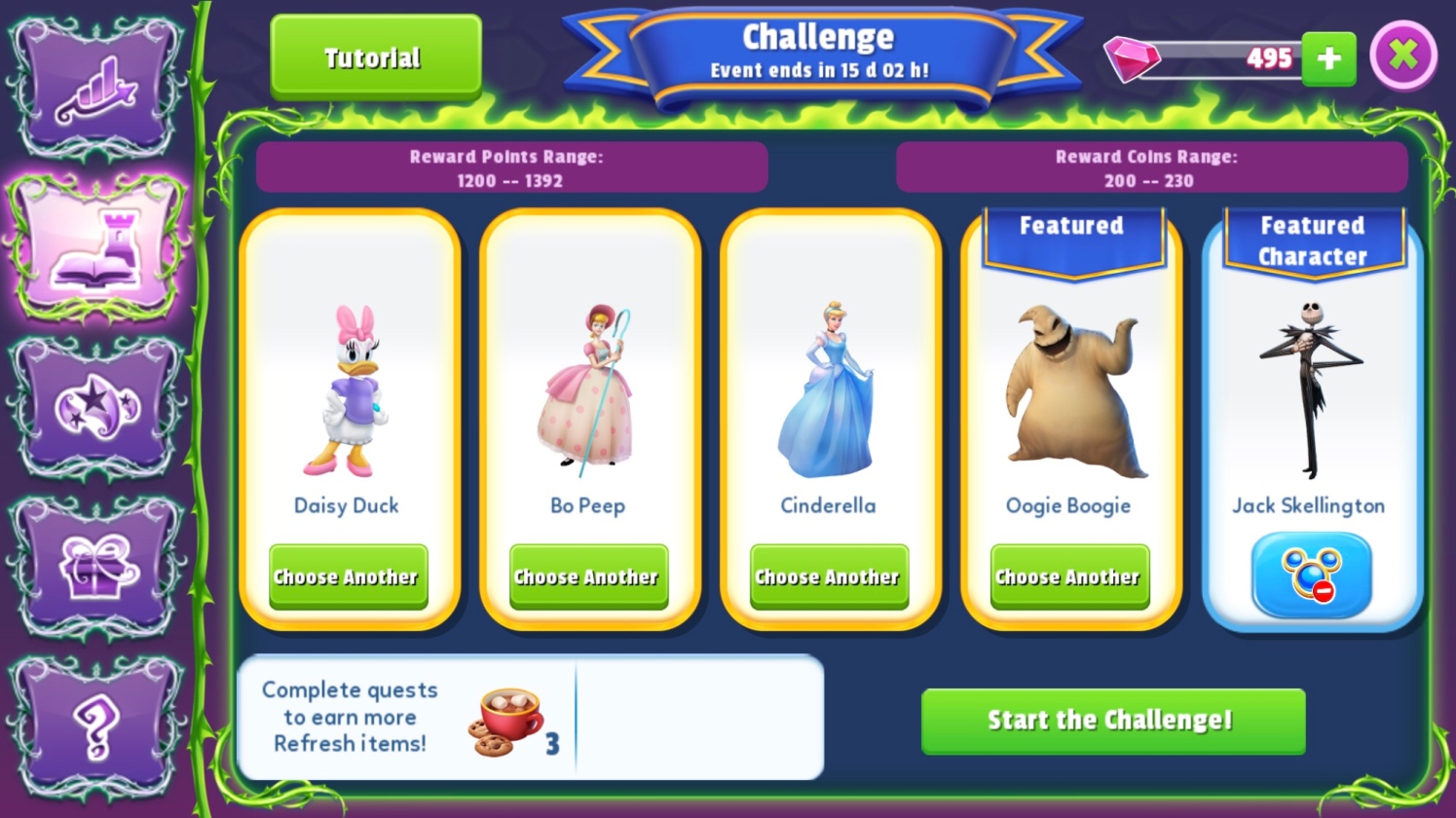 These characters will be unavailable during this time.

A couple of notes on the Challenge.  First of all, after a character is sent, they will be Tired.  You can refresh them one at a time with your cocoa OR once a day, you can refresh all.  So the best strategy here is to send different groupings of characters until you run out of characters to send.  THEN you can hit the refresh all and start from the top.  The other thing to know is that the featured character, in this case, Jack, will never become tired, so send him to challenge as much as you want!  For starting out, though, I recommend using him to complete his quest chain FIRST.

The Challenges will give you tokens and reward points which you can then use to progress in the story of the event AS WELL AS welcome the featured character of the week and a building of theirs if you don’t already have them.

Earning reward points will progress the Chapter and also earn you exclusive to this event rewards!

The main draw to this event is certainly being able to welcome Jack-Jack.  In each of the three chapters, you will be able to use Maleficent currency to unlock his tokens.

This starts with his bottles, which are only 200 a piece. 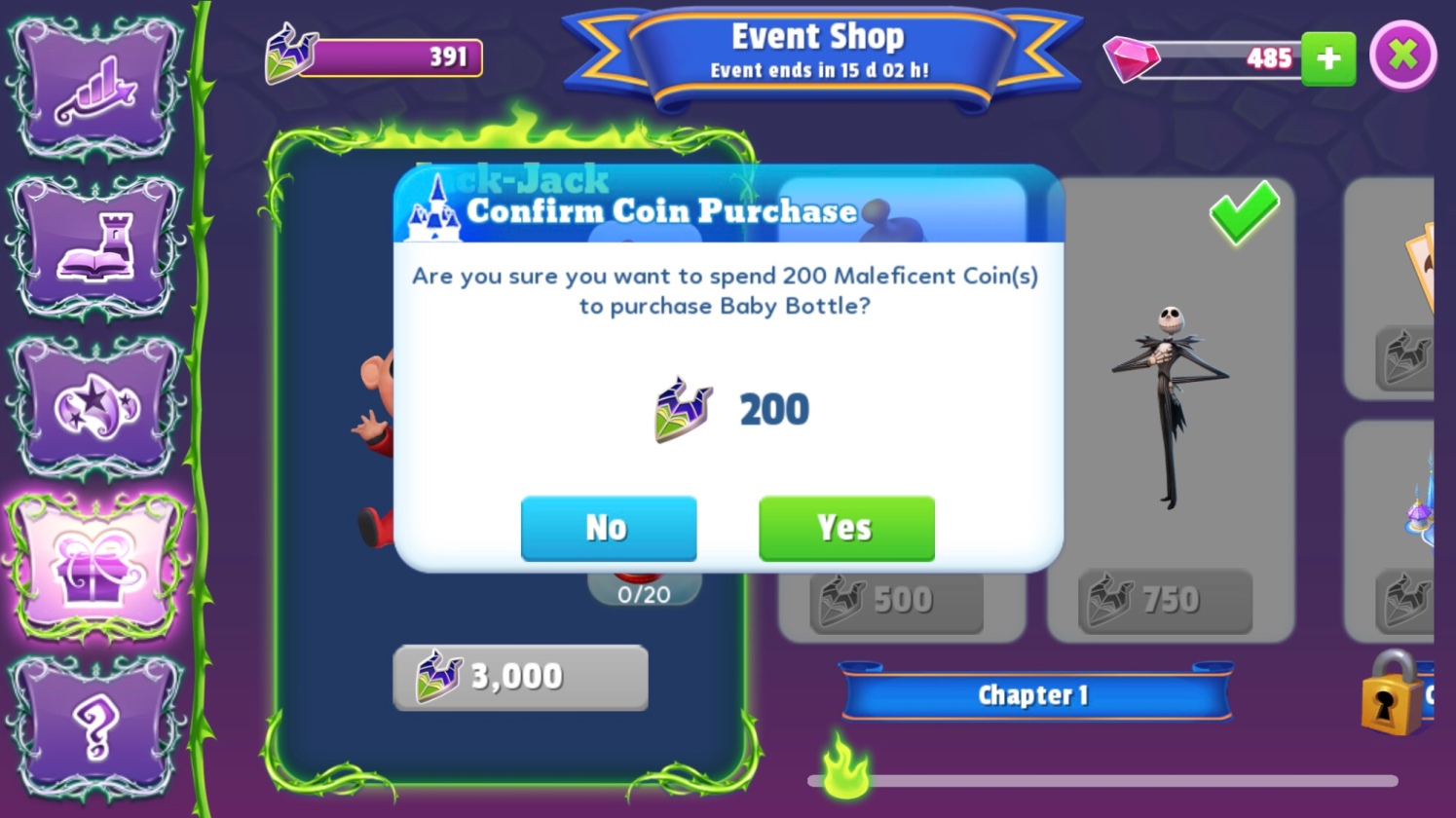 In Chapter 2, you’ll be able to get Anna, as well as his cards.  Note, I already had Anna and Arendelle Ice Rink.  That is why they are checked off.

And finally you’ll be able to get his hats, and Mrs. Incredible if you don’t already have her. Please note, that Chapter 2 and 3 are time locked, and will unlock once their timers expire. 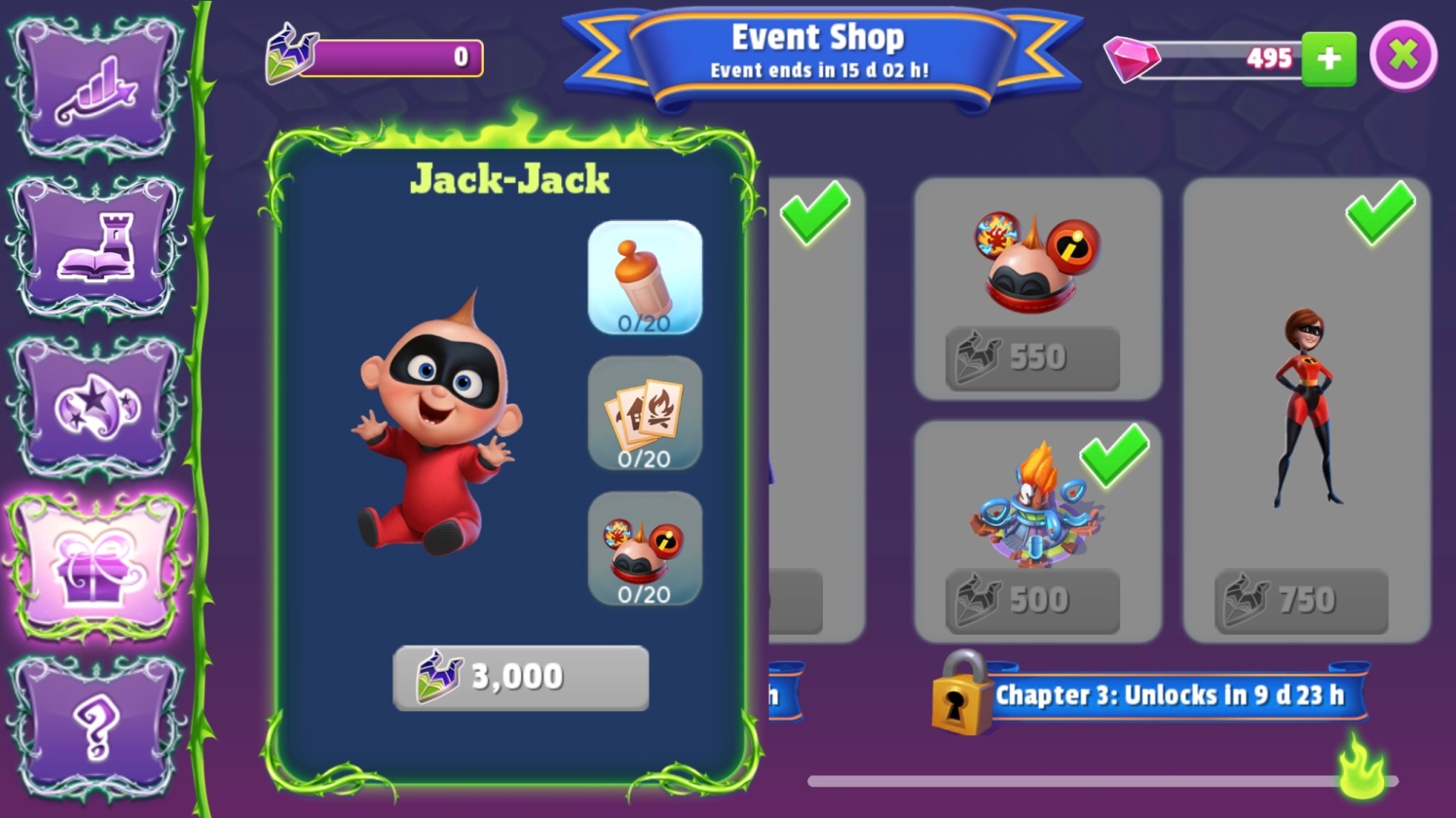 As always, there is a handy little FAQ included in the game to make sure you’re on the right track with the event.

I also want to mention that some buildings will get cursed.  You will need to click them TWICE to uncurse them.  This will give you Maleficent Currency, but will also allow you to start using that building again! 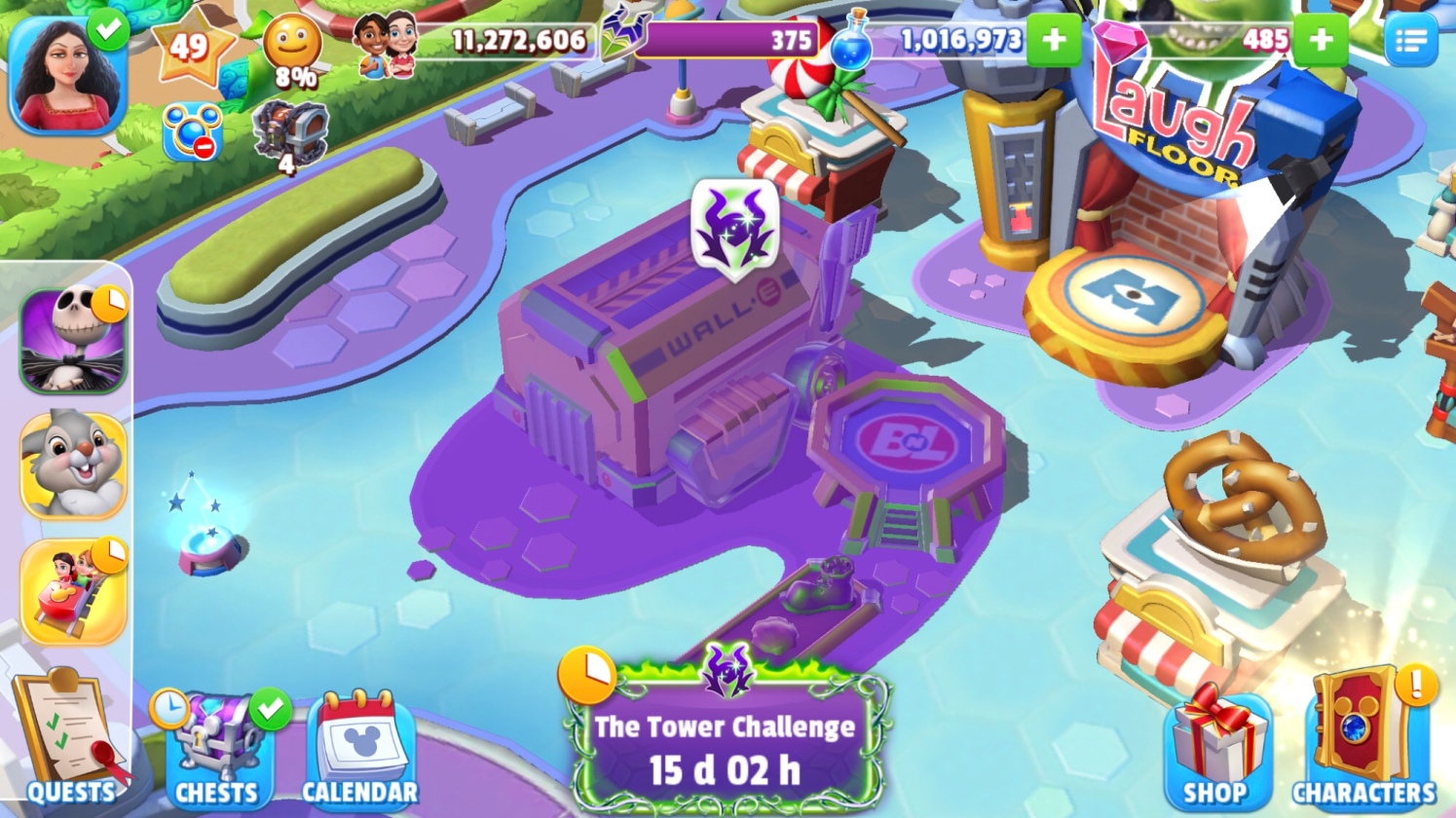 I also want to note that certain characters do drop refreshing Cocoa so make sure to load up on these so you can refresh to your heart’s content!

Now get to Work!

And that’s the event so far!  Let me know any questions you have and how you are liking the event as it gets started.  This is a very different direction for DMK and so far I really like it!  We’ll see how things progress over the next 15 days!!