Hello and happy Sunday!  Christmas must have come early because only one week after revealing a character I have the sheer joy of revealing ANOTHER character!  Happy Day!  This week I am proud to reveal our very first magic user of the bunch.  And once you’ve gotten to know a little bit about this week’s mouse, make sure to scroll down for an announcement regarding next week’s update.  I’m so excited to share something extra special with all of you for the Thanksgiving week!  Alright, let’s get to this update.  Ladies a gentlemen, I present the very proper, very dashing, incessantly charming, Arthur DeGandia!

I think it’s pretty much a given that someone in everything I write is going to be sarcastic and bitter, or should I say, it’s a given that someone is going to act like myself.  In my last work, A Love Story for Witches, that just happened to be the main character, Adam.  While Arthur may not be the main character, he is certainly an important one.  Being a member of the Longtails is about the most noble thing that Arthur does.  In general, he’s a character that works to get paid.  But he also has a soft spot deep down, and cares deeply for his comrades.  And if you ever need to just relax and avoid life’s dramas, Arthur is the mouse to go to.  No one knows how to blow off steam or unwind after a hard day like this mouse.  Arthur is a type of mage known in the Longtails universe as a Scarlet.  In fact, most mages in this world are delineated by a color type.  To better understand this, let’s learn more about this class of spellcasters.

What is a Scarlet?

The entire time that I was writing Longtails: The Storms of Spring, Arthur was referred to as a Red Mage, which of course comes from the popular series, Final Fantasy.  As time went on, though, the differences between these two became bigger, and eventually I decided that the name needed a change.  Still, remnants of the inspiration behind this mage type can most certainly be seen in Arthur’s fancy red outfit. 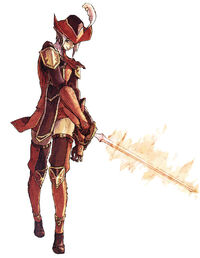 Scarlets are mice in the Mage’s Guild who have gifts with magic but will never be proficient enough to rely solely on it.  Likewise, they are often skilled swordsmen, but again, not skilled enough to go into a battle with merely a blade in their paws.  Being efficient at two skills but masters of neither, Scarlets provide a fun intersection between fighters and magicians, casting a spell here, brandishing a sword there.  They’re quick thinkers and often settle for an unconventional solution as opposed to the obvious one.  Scarlet’s wear uniforms of red, making them easily recognizable.

Common Spells and their Uses

Magic, in the world of Longtails, can be quite different depending on the type of magical abilities the mouse conjuring the spell is using.  For Scarlets, who aren’t as skilled in magic, speaking a spell’s name is sometimes required.  This usually happens when the spell is particularly difficult or when being cast in a time of extreme stress.  For Violet’s, mages much more attuned with magic than brute strength, all spells can be merely thought.  In either case, the user must at least know the spell they are casting in order to cast it.  Here are some common spells, as well as some that you will see in the pages of Longtails: The Storms of Spring.

Heilen – A spell used to ease pain; to heal.

Virbel Gravitas – To create a vortex which pulls everything in a small radius towards it.

Firenze – A fire spell, used for burning or, when cast in a direction, to hurl a fireball.

Illuvata – To create light in the absence of it.  Should there already be light, this spell will seem much less impressive.

Crescere – A more advanced spell used to increase the size of another spell.  Once a spell such as Firenze is cast, the caster may focus it, using Crescere to make it significantly larger.

Ascender – An advanced spell which allows a previously cast spell to rise upwards from its current position.  Once a spell is cast, the caster may focus it, using Ascender to make it rise above its initially cast location.

Next week will be Thanksgiving and, wanting to do something extra special for all of you who have already taken an interest in Longtails, I am excited to announce that I will be releasing the very first short story from the Longtails universe, or as I like to call them:  Short Tales from the Longtails.  This will hopefully give everyone a chance to sink their teeth into the world a little bit and get to know how mice in the Mouselands live from day to day.  In the meantime, have a great week!