It’s hard not to have a love of trains, especially as a board gamer.  Trains seem to pop up all the time as a theme for board games.  From Russian Railroads to Ticket to Ride, something about these cross country, track-riding machines really calls to us.  Enter Whistle Stop, a new game about crossing the country from East to West in an effort to transport goods across intertwining railways.  Using coal and whistles, you the player must move your train fleet West, or be left behind as other train companies make a name for themselves by earning share in big name railroads.  Using tile placement, resource management and a lot of heavy thinking, Whistle Stop stands as an easy to learn, hard to master puzzle of transcontinental train travelling.

Depending on the number of players in your game, you’ll have a set number of trains with which to make the journey across the board.  To travel, you’ll be using coal, in order to move West or up and down, as well as whistles, in order to move two spaces or backwards.  In theory, this sounds relatively simple, but a couple turns in will have you scratching your head as at least one of your trains becomes stuck with no hope of movement until you nab a whistle, which you realize all too late is a very hot commodity in this game.

As you move across the board, you’ll be earning resources which come in six varieties and then using these to complete orders at Towns and eventually on the far West end of the board.  These will earn you points instantly, but will also earn you shares of each Town’s railroad type.  These are important because in the end, the player with the most shares of any given railroad will earn an additional 15 points.  As you can imagine, this becomes a huge amount points if played right and can turn the scoring track upside down at the end of the game. 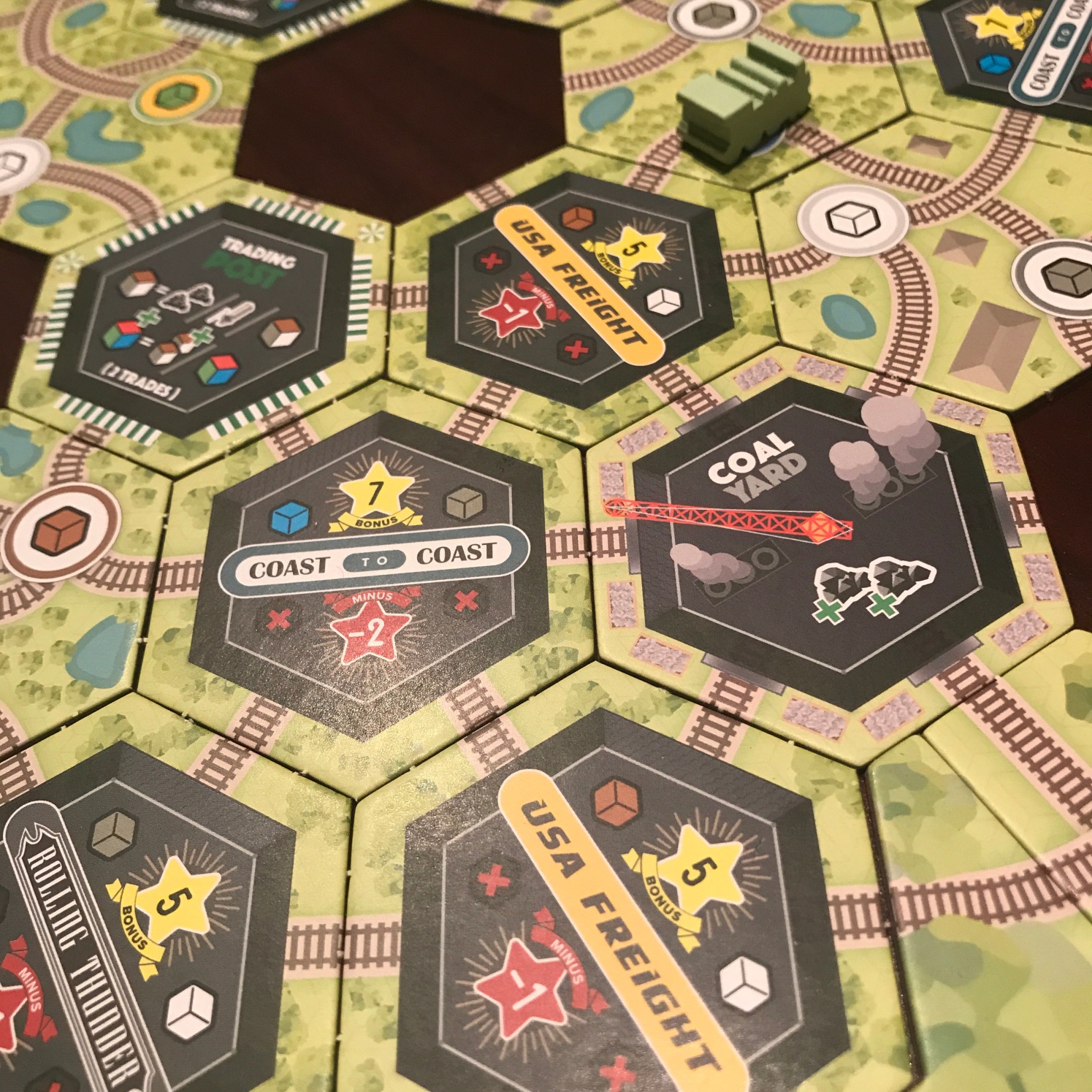 As you progress across the board, you’ll be playing tiles from your hand.  Some of these will be simple railroads, while others will be special tiles that can allow you to trade resources or gain gold tokens, worth points at the end.  Other still will be towns where you can earn extra points.  Be careful though.  Any ‘special tiles’ left in your hand at the end of the game will lose you 10 points each.  You can even purchase upgrades which can do everything from expanding your hand size limit to forcing players to pay you resources when passing you on the board.

The game, especially your first time playing, has an interesting dynamic because you’ll be realizing the true challenge as you play.  Moving around the board seems an easy feat, but once you realize the way that the tracks intertwine, you’ll learn that you can very easily end up on a track heading towards a dead end.  Likewise, you’ll find yourself scrounging for every last point, and every extra coal or whistle in hopes of being able to gain just one more point of movement.  It’s a game that will literally have you feeling the gears spinning in your head by the end.  The player with the most points, gained from everything from railroad shares to spare tokens and resources will take home the winning spot.

What Makes Whistle Stop So Great?

Whistle Stop is a deceptive beast.  Mainly because the rulebook doesn’t waist time with hints or tips.  In fact, as I’ll speak to further into the review, the rulebook is a bare bones, cut and dry book, filled with no substance whatsoever.  This does however create this amazing experience of realizing the giant puzzle that makes up the game laid before you.  You will undoubtedly mess yourself up in some way.  Or perhaps someone will block one of your trains.  Or perhaps you really need a blue resource and you simply cannot manage to pick up or get to a tile to make that happen.  There are moments of extreme aggravation as you bite your nails knowing that you don’t have enough movement points to get to where you want to.  But then there are moments that will leave you exhilarated as your plan finally comes together and you reach the end of the board and garner a huge bundle of points. 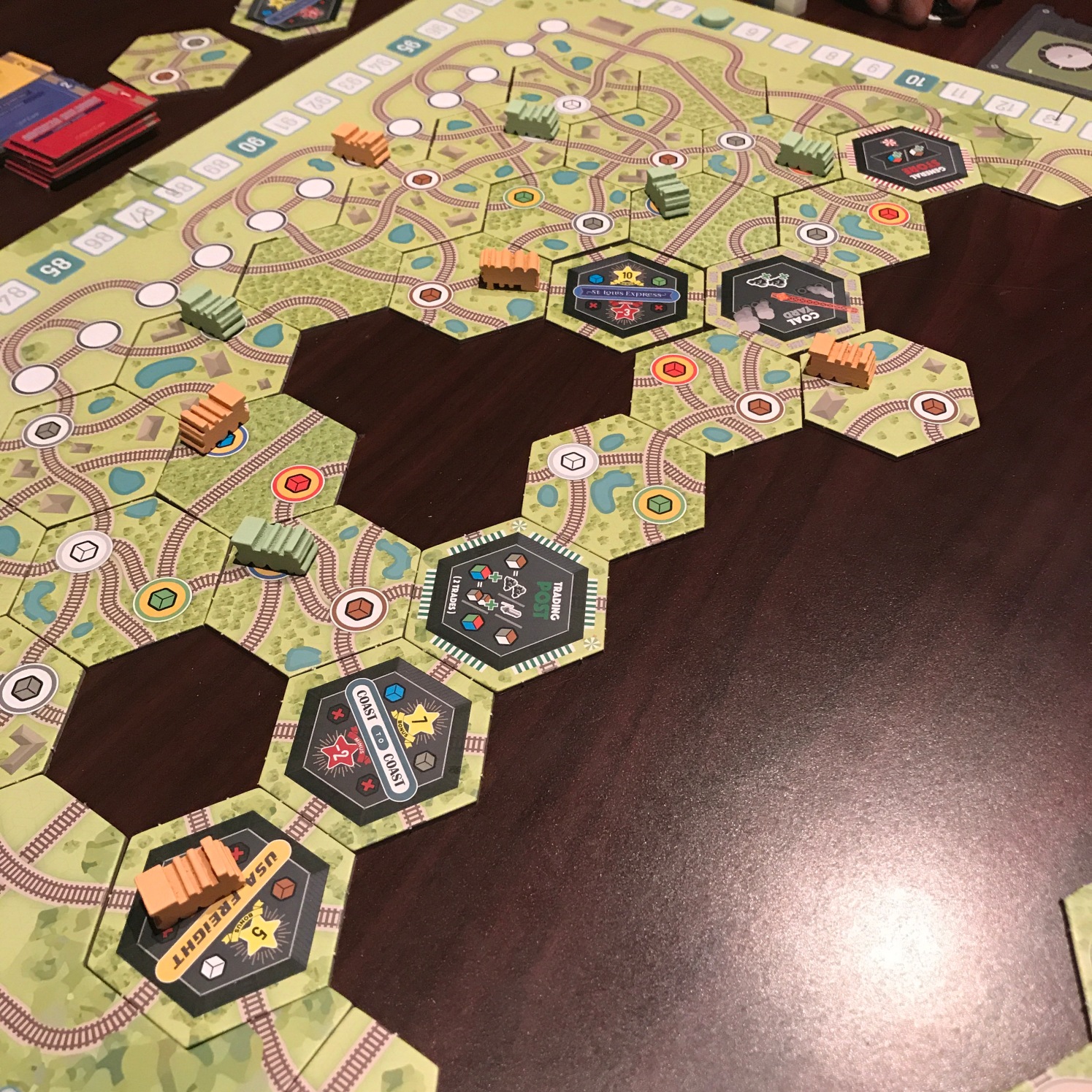 The puzzle of how to make the most out of every single turn is where Whistle Stop really shines.  When you get it right, it feels so amazing.  By the end of the game, I had a good system going and it was super gratifying to reel in the points.  However, I also love that there is no clear victor until the very end when points are counted up.  Because of the many things that go into the point pool, it really is anyone’s game, and even someone in dead last can blast their way to first place at the last moment.  I love that, because it breeds strategy and never makes anyone feel like they’re completely out of the running just because they’re a bit behind.

What Could Make Whistle Stop Even Better?

As I said before, the rulebook could use some photo examples or simply a little more context as to why you would want to do certain things.  After all, when I saw that whistles could move you backwards, I couldn’t grasp why that was so important until I’d already wasted my first one.  That’s a cool aspect to your first game, but should someone in the group have played before while others have not, it puts them at a very harsh advantage.

Besides that small complaint, I wish that there were more player interaction.  It’s a very fun puzzle to try and rack up points.  Don’t get me wrong.  I loved working out every single move, but then, on others’ turns, I found myself playing with my phone or going to the bathroom.  There was no real need for me to be there.  And that’s unfortunate.  Given that someone can conceivably do up to four actions, some turns, especially late in the game can last a very long time, leaving other players to simply wait.  It’s a shame because it really makes the second half of the game drag.  You’ll do something amazing on your turn and then lose momentum as you sit and wait an eternity for other players to take their turns, which won’t affect what you are going to do next anyway.  Sure, who gets to the end first and places a train on a resource slot to gain free resources and tokens affects everyone, but not so much that you need to be engaged on another player’s turn.  It’s a big miss in an otherwise phenomenal game.  But maybe an expansion will fix this. 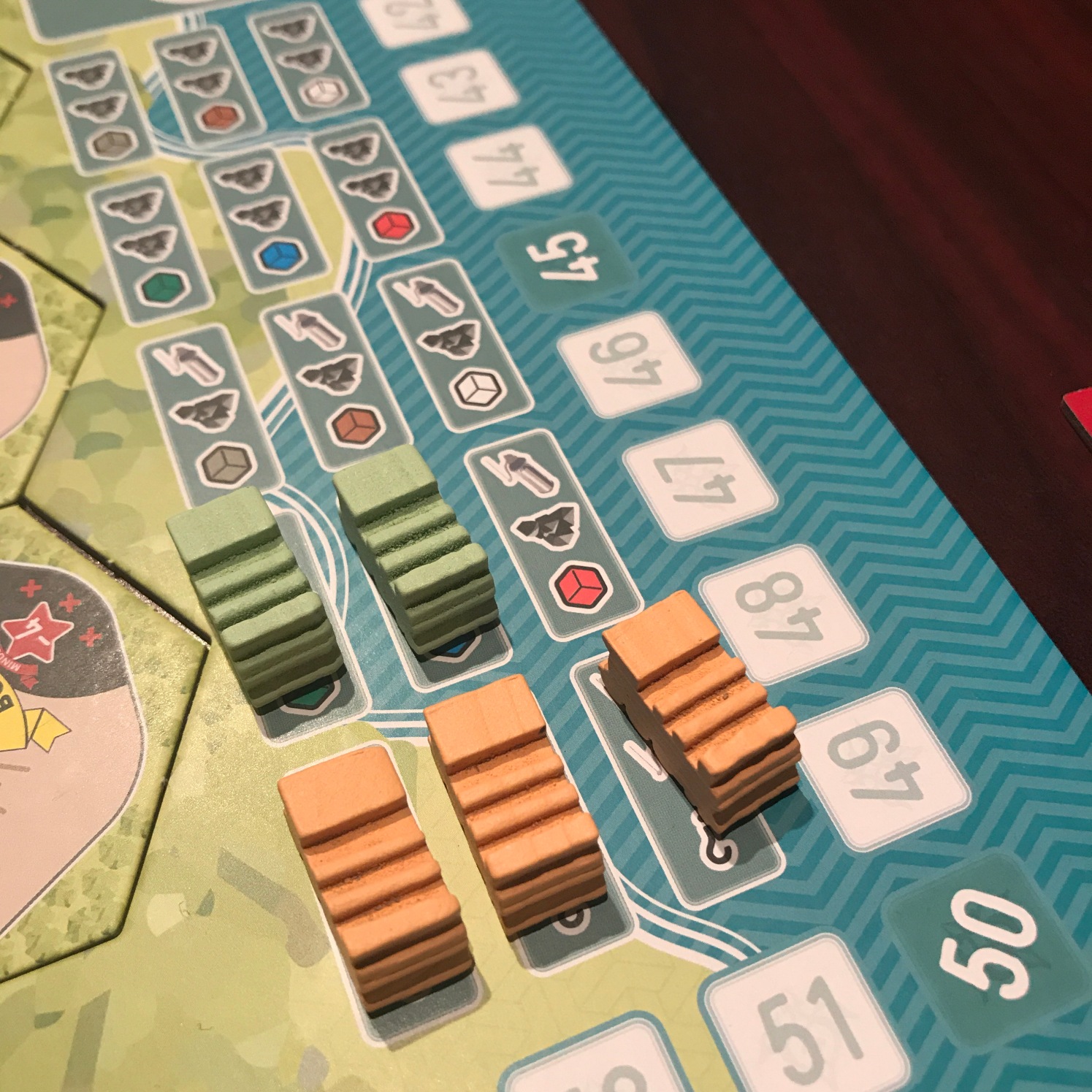 Whistle Stop is a grand puzzle that will have you scratching your head and counting out turns to get the most out of every single movement of every one of your trains.  It’s a simple to learn game that is hard to master and rewards deep thought and strategy.  Furthermore, the components and board are adorable and colorful and enough to get any family excited to jump in and play.  The long turns and lack of player interaction might deter some who are looking for a more interactive experience, but for those looking to play something where you try hard to out think your friends and score as many points as possible with limited turns and resources, Whistle Stop will shine as one of the best train themed board games you can get your hands on. 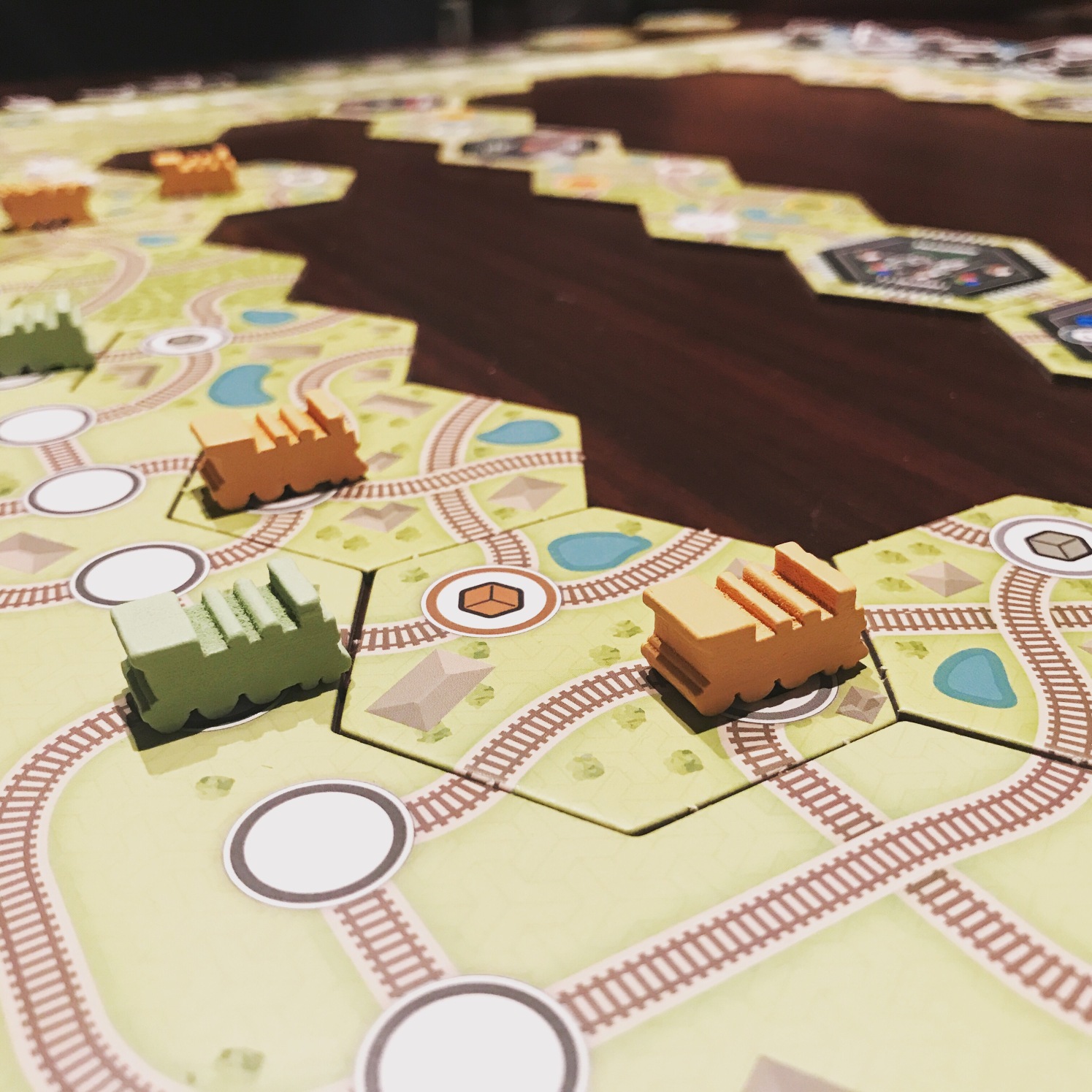