I am a huge DC Comics fan.  If you frequent this blog often, you’ll know that I’m also a huge Disney fan.  But the nicest thing about this being JaysenHeadleyWrites and not DisneyALLTHETIME is that occasionally something a little different comes along and I get to share it with you regardless of who owns the rights.  Today saw the release of one of those rare breeds of something outside the norm of conversation for us and I am so happy to finally get to play (and write about ) DC Legends, the newest game about DC super heroes from Warner Brother Games and DC Comics.  My hands were sweating feverishly as I downloaded the game and frothed at the mouth with excitement.  Come along boys, girls, aliens and Amazons as we dive head first into the multi-verse.

We started off our epic journey with some preamble about how evil manhunters were coming to eradicate all life.  Seriously, don’t these guys have something better to do?  This planet isn’t even that great?  Look at our political system!  There has got to be a better place!  Okay, fine they’re coming.  Let’s get to work. Zatanna showed up to let Superman that things were so bad that even texting wasn’t working.  TEXTING!!!

Pretty soon, we were fighting Manhunters just like the good old days.  The action here is top-notch, as well it should be, considering this is a game all about action.  DC Legends is essentially a turn-based RPG.  That means that I have a team and my opponant has a team and in a game of super hero chess, we take turns to throw attacks at each other in hopes of decimating the opposing team.  This is made especially fun as many of the attacks come with cool animations to really make you feel like this is an epic battle of the supers. You can see below how are teams are pitted against each other.  The next level of this puzzle can be seen in the top right corner.  See, there are three types.  Think of it as a rock/paper/scissors system.  In any given battle you want to try to use characters that are stronger against your opposition.  for example, you might want to use Physical attacks (Red Fist) against Mystical Opponants (Blue Eyes) in order to do more damage.

This is made easier to notice as whenever you are choosing an attack with a character, you’ll easily be able to see who is weak to you.  Notice the red and green arrows over the heads of your opponents.  Green means that they are weak while red means that they are strong to you so you will do less damage.  This is important because this game is very similar to a game which was shut down not long ago, Marvel Avengers Alliance 2, and the main complaint of that game is that it was far too complex for most of the casual audiences of the mobile gaming genre.  So easy to see cues like the red and green arrows are a great way of simplifying a surprisingly complex system for newcomers to these types of games. There’s a pretty interesting story here complete with a lot of areas you’ll recognize if you are familiar with the DC Universe.  That being said, there is also plenty of groan worthy dialogue.  However, for me this is not necessarily a down side.  It’s funny enough to keep me entertained.  Whether or not that was the devs intention, well, one can’t be sure. But while the action is fun to look at and the story provides reason to keep going, the real thing that will keep you coming back is the collection of a massive roster of characters.  As you play, you’ll collect points that are put towards characters to unlock and upgrade them.  I found that very quickly I was given a handful of fun character to play with, which made me excited to keep going in order to see who was waiting for me after the next few missions.

It isn’t enough to simply unlock these characters though.  You’ll find that you need to level up your character using XP Boosts found on missions.  You’ll also need to level up their abilities and also their equipment.  This is all in hopes of eventually raising their rank which is shown in stars.  Most of your early heroes will be 1-star, but get them to 5 and they can become legendary.  And we all know that we want the heroes that are Legen…wait for it…ary!

This might sound like a lot to take in, but I find that the game does a great job of letting me know when characters are ready to be leveled up.  There are always helpful hints pointing out that yes, indeed, Green Lantern needs some new pants.  You’ll also be given a handy starter bundle to get you on your way, which is great because by the 3rd Chapter, things are going to start to get harry if you haven’t leveled up a bit. There’s a wonderful attention to detail in the game.  Every character you unlock comes with a BIO which you can read in order to fill you in on the character.  While this might not be necessary for Batman, it gives you some much needed backstory for any character you might not quite remember.  And by the way, I LOVE that there are obscure characters in this game.  I’m always a fan of games that make me feel like they were made for the fans and this one has that feeling.  There are plenty of characters you know, but also several that might not and that’s a very good thing.

And then there are characters you wish you could forget…ahem… 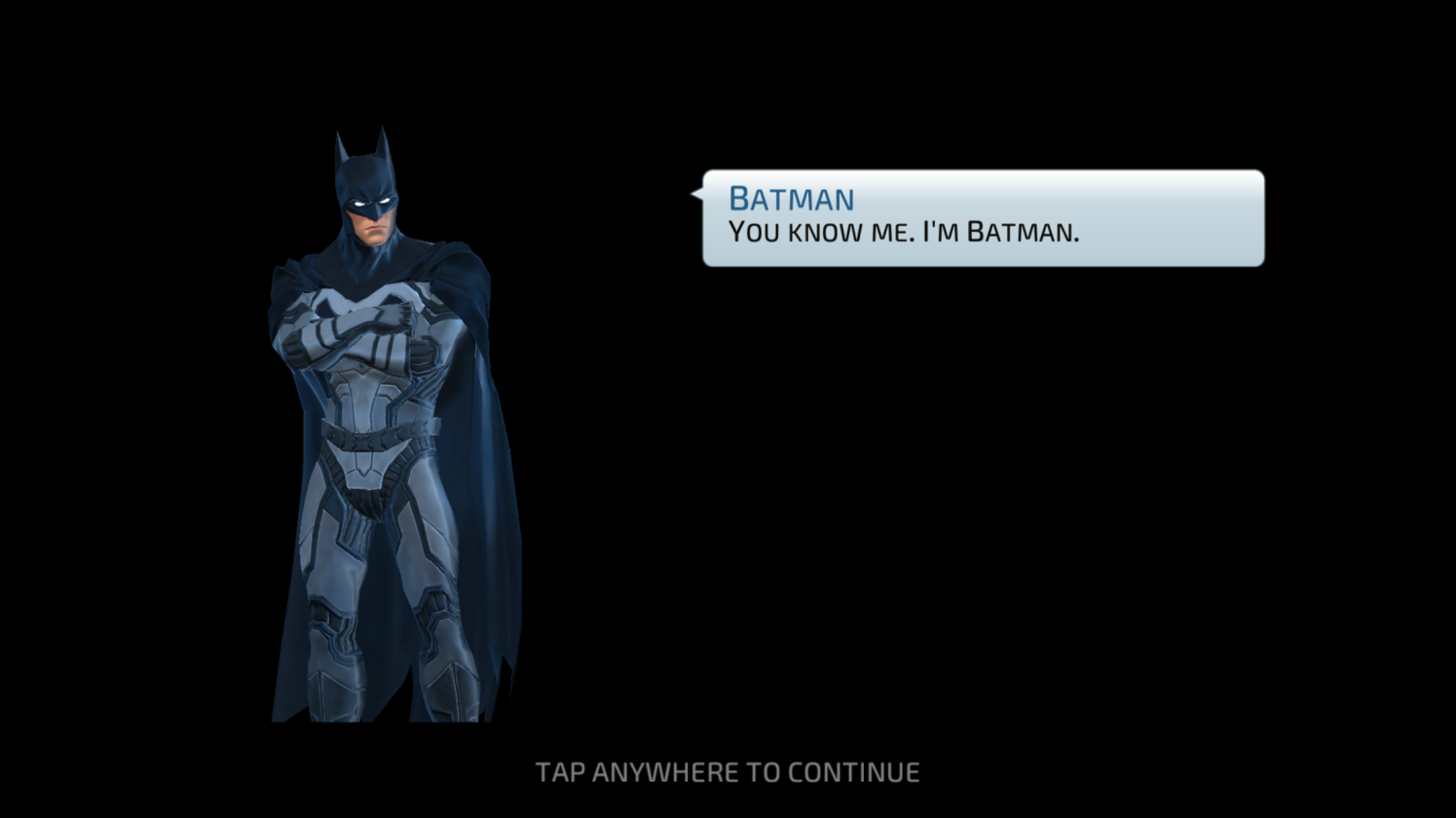 You’ll also find some nice daily bonuses.  While there are a lot of things to unlock and you might find this overwhelming, it’s nice to know that I’ll be getting fun gifts just for returning to the game every day.  I used to think that every game did this, but I’ve recently found that to not be true.  It’s a great reason to get me to check in and I absolutely want to unlock some Harley for the fight!

Speaking of free, if you pre-registered, you’ll also be able to pick up your free 3-star Striker Wonder Woman who is definitely helpful in early battles…aside from her Amazonian War Cry which begs the volume to be turned down. Before long I was fighting a pretty epic boss and I love that he had a larger than life feel.  Again, the scope of this game and feeling that you are actually a team of super heroes fighting this world ending battle is really on point.  This is brought together by great animations, fun music and characters which are beloved by any DC Comics Fan. 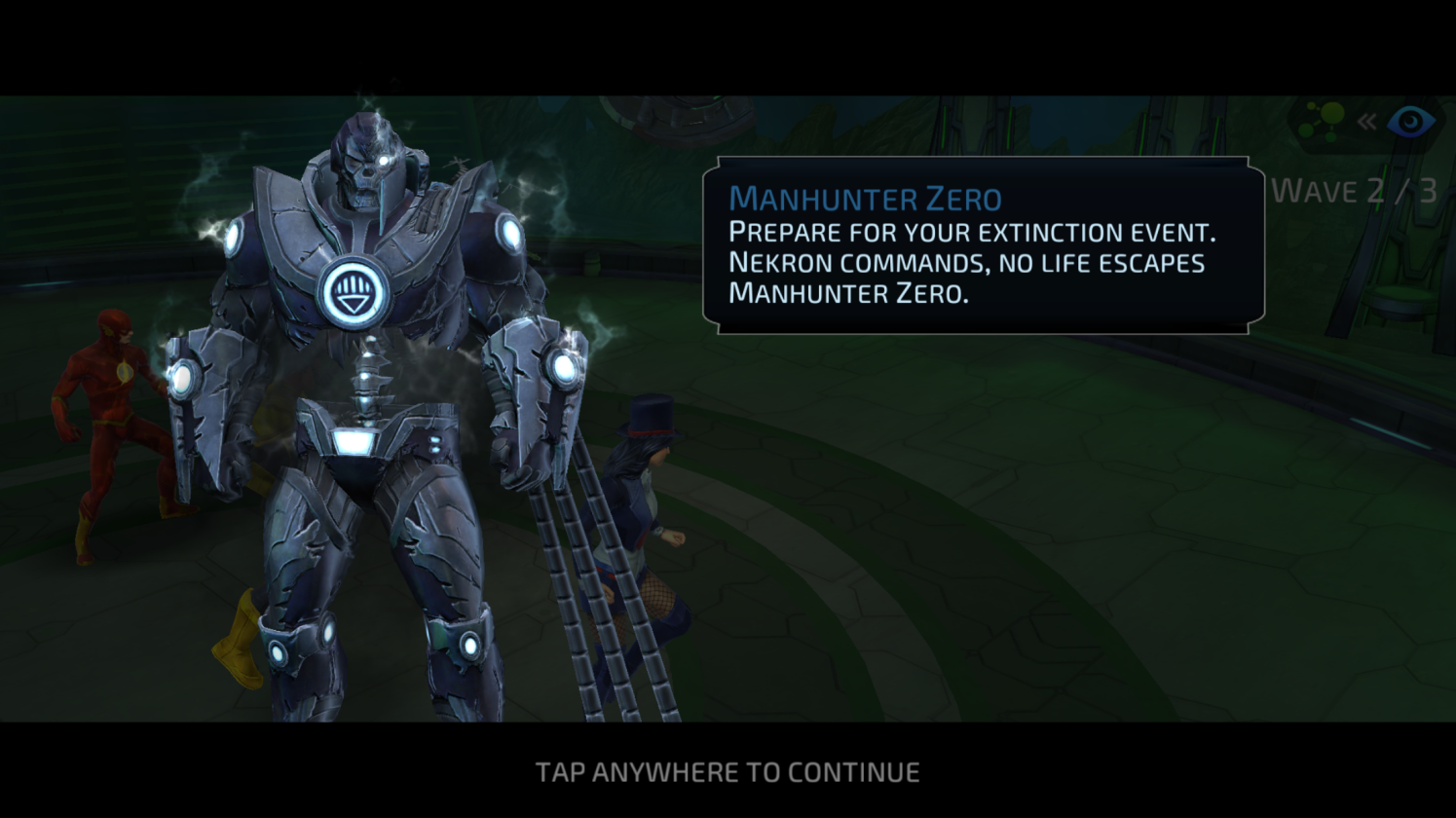 AHHHH!  Is it to late to send in Superman!  RUN!

So far I have only dipped my toe into Player Versus Player, mixing and matching teams and Heroic Missions but I am LOVING the game.  While it isn’t necessarily a far reach from other games of this type, it does succeed in bringing to life a group of some of my favorite characters in entertainment.  The presentation is slick and the tutorial is enough to get you going.  I found myself learning quickly and never felt lost or confused.  While this is a more complex game than many we’ve covered on this blog, it is also a special brand of free to play super hero goodness and if anything you’ve seen above looks the least bit interesting, you owe it to yourself to give this one a try!

And if you want to join a helpful community to share your time with the game, make sure to  Join our DC Legends Facebook Group