After waiting for over a year, last night, at midnight, I finally got my hands on the newest gaming adventure from Disney, Disney Magical World 2.  If you’ve been following this blog or simply following me on Twitter or Facebook, you’ll know that I have been dying to play this one.  I recently played through the first game and blogged about it here and now I am happy to present my play through of the sequel.  Last night I stayed up until 2AM playing and today I awoke early to jump back in.  With the prologue complete, I am finally ready to start chronically my journey here.  So let’s head into Castleton and see what’s new.

Right off the bat, the game had me gawking at just how beautiful everything was.  The city is glimmering with color.  I think this also a good time to mention that the game makes strong use of the ability to take screenshots which auto save to the SD card at ALMOST every moment.  This includes most cut scenes as well as story moments.  As someone who was taking screenshots with my phone for my replay of the original, this was a huge improvement!  All the photos you see here were taken with the in-game camera.  And judging by the amount of photos here, you can tell this is my favorite feature in the game. 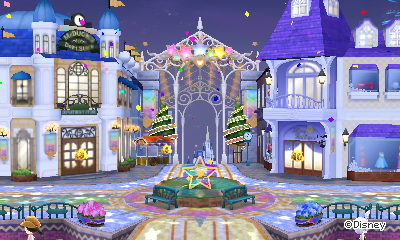 It wasn’t long before I was meeting the townsfolk and how should show up, but Mickey, who felt the need to tell me who he was.  That’s like Oprah needing to tell you that she’s Oprah.  I know who you are!

Mickey led me into town where he along with Donald, Daisy and Minnie had prepared a dance for my arrival.  I am sure that kids are going to love this but as an adult Disney fan, I can honestly say it filled me with all sorts of happiness.  In many ways, DMW2 really feels like visiting your favorite Disney park, much more than the first game.  This welcoming dance was just the start. 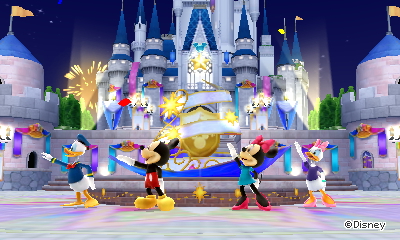 Afterwards, I met with the crew to discuss their dancing and let them start forcing their agenda on me.  Lay off Daisy.  I just got off a flying boat. 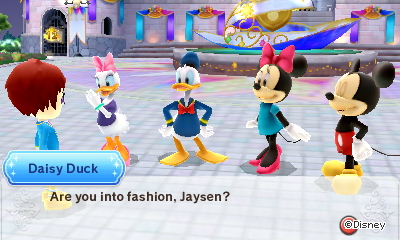 Much like in the first game, you’ll be collecting stickers in order to open up new areas.  This gives the game a nice sense of progression.

I have to say I was really hoping that the King would be Mickey in this game, instead of this guy from the first game.  Oh well, the fact that this guy is ruling leaves Mickey free to hang out with me.

There’s somethign really special about walking down the street with one of your favorite characters.

Before long we headed over to the neighborhood.  This is completely new to this game and involves houses for the main characters, meaning you can visit them and see how they decorate.

Unlike in the first game, where your house was on the top floor of the cafe, and wasn’t given to you until very far into the game, DMW2 wastes no time in giving you a lovely place to decorate and customize to your heart’s content.

At the risk of sounding technical, I love that once you’ve made an item, say, a chair, you can place as many as you want in your home without having to make multiples.  You can also use the item in the cafe.  It makes me want to customize more because I don’t have to waste a bunch of time making 3 of the same object. 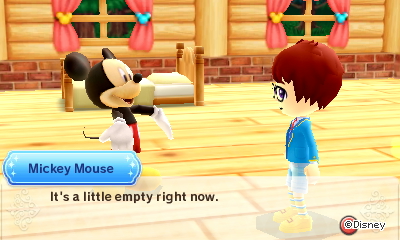 Thanks for reminding me, Mickey.  Maybe you should give me some furniture…

Meanwhile Donald was busy, looking up into the sky.  Okay Donald, that sounds…um…fun? 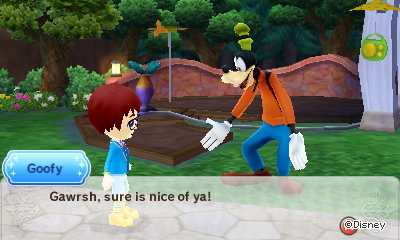 Goofy has a nice little garden to pick from and told me I can steal, er, borrow from his garden any time.  That being said, I can’t wait to get my own garden as that was one of my favorite parts of the first game.

Mickey was kind enough to invite me to his home.  Pluto was acting totally chill of course.

Then Minnie decided to ask me over.  Though it sounded a bit flirtatious.  Sheesh, buy a guy a drink first.

We headed over to the local cart to buy a balloon, which I proceeded to run around with for a while.  The items at the shops change for times per real life day, which seems excessive, but I suppose it means you’ll never run out of things to do.

Then I met Castleton’s very own millionaire, Scrooge. 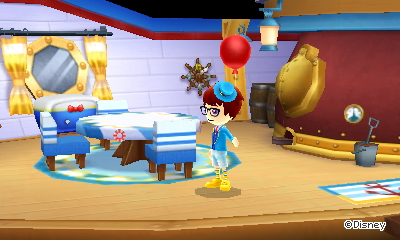 He sent me to check on Donald who lives in an adorable boat.  Hey Donald, wanna switch homes?

Donald decided it was time to teach me to fish.  Fishing seems a little bit easier in this game.  The bob is much larger, but the time you have to press A to catch is shorter.  So it balances out, I suppose.

A walletfish?  Do I get some money out of this or…

McDuck’s is virtually unchanged from the fist game, BUT it has more items as well as no upstairs.  Now Scrooge waits near the door to help speed up the selling process when you want to unload goods.  Speaking of which, my saved game from the original entitled me to a golden balloon and voucher to sell for lots of coins at the shop.

Finally it was time to head over to Daisy’s to learn about fashion and making my very own outfits. 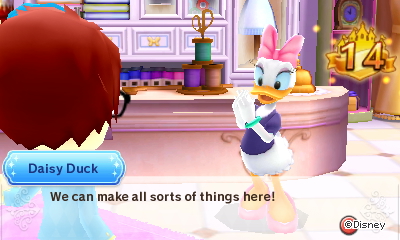 I hate to admit it, but I really do like dressing up in this game. 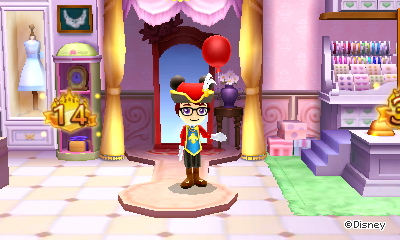 I made my new Mickey Mouseketeer costume and of course, headed out to take selfies.  As one does in Castleton. 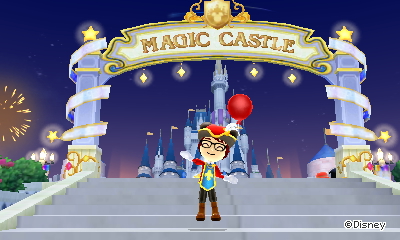 Things were about to take a turn for the adventurous as Yen Sid invited me to grab a wand and head out to hunt ghosts. 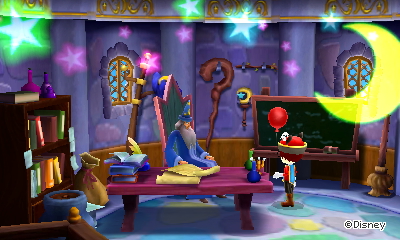 My first mission was to help out the adorable Chip and Dale who had lost an important gear.  Apparently ghosts stole it.  Likely story guys. 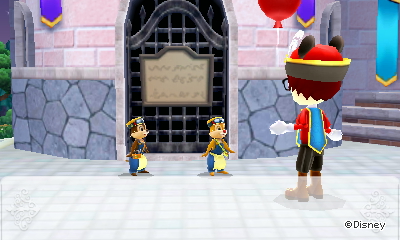 What is that?  How are the guards not more concerned about all these ghosts in their castle?!

Coming out just barely alive, I headed to the workshop to replace the gear.

I ended up doing another mission to find Goofy’s keys, which he then determined meant he could get back into his house. Umm, yeah.  That’s sort of how keys work big guy.

But rumors were spreading around town of a cafe, long abandoned that was about to be reopened. 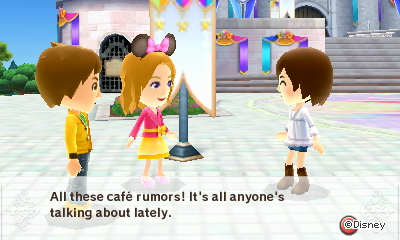 If everyone is talking about it, why haven’t I heard anything about it until now?

The king decided I should head up the cafe effort and even gave me an assistant who had an eye for dead end jobs.

The cafe is much more lavish this time around and feels like a high end restaurant. There are even dancers!  DANCERS!  And you can dress them up and choose their genders and…okay sorry.  I really got excited about the dancers in the cafe.  Deep breaths.  Ahem. 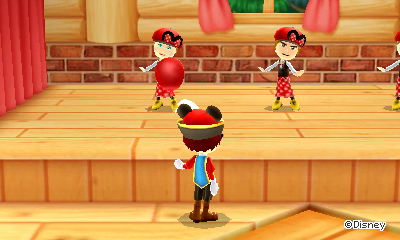 With a little effort, guests started coming in and enjoying their Mickey themed meals. 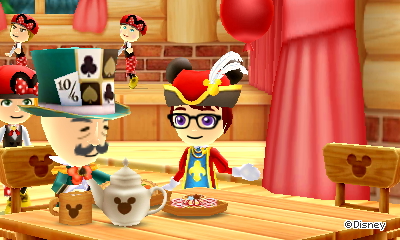 And not long after that I was filling requests and customizing the cafe to my heart’s content. 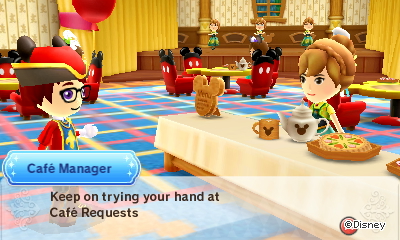 Of course this meant that I was able to invite a couple of friends over with my first party.

Parties are much more in depth this time.  Depending on how many theme points you have, namely how much of one them you’ve poured into the place, you can choose who comes to the party.  The more theme points, the more characters from a given theme you can invite.  This means that you’ll want to deck out your cafe as much as possible in a given theme in order to have the biggest party possible. 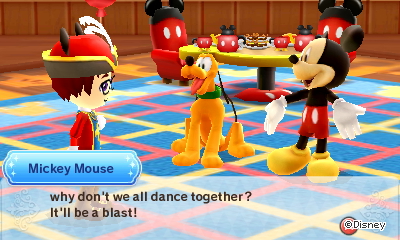 Mickey and Pluto were happy to come to the cafe and decided we should dance.  OBVIOUSLY I agreed, because the only thing better than having dancers at your cafe is BEING a dancer at your cafe. 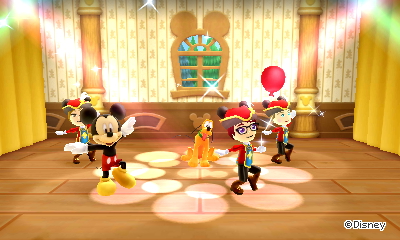 We ended the party with a group shot! 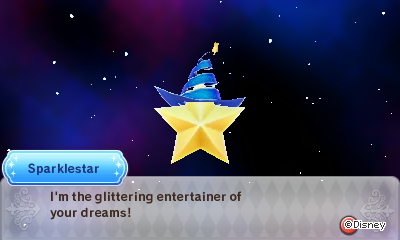 I knew that my time in the prologue was coming to a close, but little did I know that a new feature was about to be unveiled.  Upon collecting the pieces of a puzzle, I was able to use the new dream book on my bed to enter into a magical dream world. 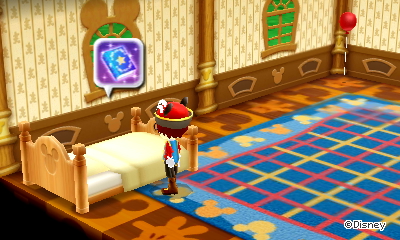 This highly colored world is a great place to take screenshots and anyone who is familiar with the Disney park’s Electrical Parade will get a kick out of the fact that the music from the parade is used here.  Basically, you complete cinematic moments here to open up a final, really amazing cinematic moment.

I drove a car with the night sky with Daisy and Donald.

Then sat on a floating bench with Minnie.

Flew a plane with Goofy.

And finally took to the sky with Mickey and all his friends!

Upon waking up, my time in the prologue was at its end.

If you can’t guess from this extensive post, I am LOVING this game.  It is full of a wonderful variety of things to do and has Disney spilling out of every corner.  I might even go so far as to call it the best Disney game currently on the market.   Everything is slicker and cleaner.  Harvesting trees only requires one action, instead of three.  Crafting items goes much faster thanks to being able to skip the actual crafting animation.  Everything has been tweaked in just the right direction.  I am super excited to play more as I dive into my quest to go after the stickers of my choice.  Something tells me that before long I’ll be diving into new worlds altogether.

Let me know if you’ll be playing the game or if there’s anything you’d like to know or see!