You might have noticed last week that I said that this week we’d be talking about Pom Poko.  Well, it turns out that I made a mistake and completely overlooked Ocean Waves, as it was a film originally made for television.  Never fear, I have corrected my ways.  Though after seeing this one, I sort of wish I had overlooked it.  But that’s getting ahead of myself.  Awe youth.  How I recall those days of High School.  Making friends.  Falling in love.  Slapping girls who I have a crush on.  Wait, no.  That doesn’t sound right.  Ocean Waves is an interesting film as it once again uses animation to tell a story that could have easily been done in live action.  And while it is gorgeously animated, it’s plot detracts greatly from what could have been something great.  Clocking in at only an hour, Ocean Waves leaves on a high note, but takes some rough turns on the way there. 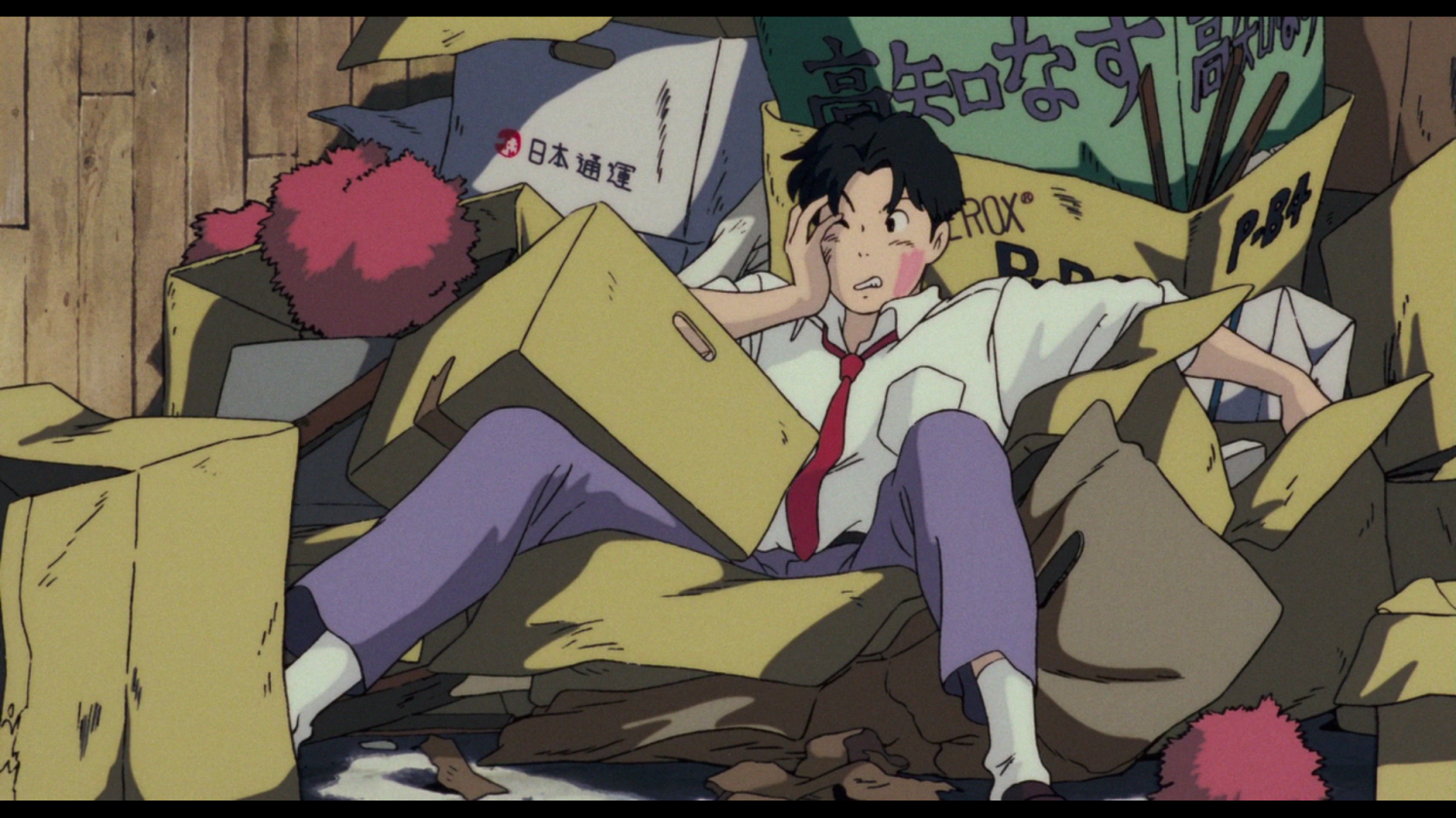 When Studio Ghibli was formed, animators who were brought on board were told that they would have a chance to make the films they wanted to make.  Yet several years into the studio’s life and those animators still hadn’t been given a chance.  Enter Ocean Waves.  The project, which was made to be a television film, was intended to help inspire the young animators and make way for the company’s future.  While Takahata produced the film, a new director was brought in.  Unfortunately the film went over budget and missed its deadline.  So costly, in fact, was the film that Ghibli would not enter into the TV film world for another 7 years afterwards.

Umm, why are you always crying?

Ocean Waves, or as the film title is literally translated I Can Hear the Sea is a film all about those tumultuous last years of High School when emotions and hormones run to the breaking point.  The story centers around Taku, a young boy who just wants to do right by his friend Yutaka.  This becomes difficult when a new girl transfers to Tokyo mid-semester.  Yutaka immediately takes a liking to her, which means she’s off limits to Taku, which is bad because he quickly develops a crush on her as well, even if he won’t allow himself to admit it.  Taku and Yutaka are fairly likable characters in their own right, and if I’m being totally honest, I think the film would have been better as a romance story between the two of them.  Unfortunately, these two boys go after new girl Rikako who might just be the least likable character in a Ghibli movie to date. When you try to understand girls for the first time…

I wanted to sympathize for Rikako, I really did.  Her parents are going through a divorce.  She’s been forced away from the city where she feels at home.  The other kids speak a dialect of Japanese that she has a hard time understanding.  It all sucks.  I get that.  But the way she deals with all of this is just one awful decision after another.  Her relationship with Taku starts when she asks to borrow a crap load of money from him.  She then borrows from Yutaka and others as a means of earning enough money to fly back to Tokyo.  When she finally does make enough, she dupes her friend into going with her, and since her friend freaks out, Taku ends up taking the trip instead.  And all the while, as she’s hustling money and making her friends uncomfortable, she’s just so ungrateful about all of it.

This is too dramatic. I’m just going to hide in here for the night.

This all comes to a head when rumors of the two going on a trip cause them to fight in the hallway of the school and actually slap each other.  And this scene might just be the moment I decided I didn’t like this movie.  Not only did I not like watching these two physically hurt each other, I just found it to be too dramatic.  It’s over the top like a soap opera and nothing felt real after that.  It was simply too much.  She was too unlikable for hitting him and he was too unlikable for hitting her back.  It was a moment that stuck out like a sore thumb.

I’m trying not to look at it but I just can’t.

BUT, as I said at the beginning, there is a light at the end of this tunnel.  In the last ten minutes, we flash forward to a year after graduation in which all the kids are coming back for a reunion.  During this time, they talk about how silly they were for being so dramatic and how, now that they’ve had a year as adults, they can see that their world was too small to understand just how crazy they were being.  Ultimately, this is a film about perspective after High School and how when we look back, things are not nearly as bad after the fact as they seemed in the moment.  Some of the characters who hated each other even discover that they liked each other.  It’s a really cool point that is made and it actually made the film, which before this was a mess, make sense.  Endings can make or break a movie, and in this case, the ending salvages the film, making it memorable where I had intended to write it off completely.

Ocean Waves remains one of the only Ghibli movies to not receive an English dub.  I can see why.  The film is VERY Japanese.  It’s not a film that I think everyone will love or even like, but it does have a good point to be made and it also showcases a snapshot of the kind of slice of life drama that is adored in Japanese anime.  It also represents a bit of a culture shift.  Most films like this would start a female in the lead.  The one stars a male.  Slice of life television with a male lead are usually quite comical, where as this one is more dramatic.  It sits at a cross roads of this genre of story telling, which makes it an interesting case study, even if its story will have you eye rolling midway through.

Fun aside. Who’s that pig fellow eating at the table in the lower right??? 😉

I’ll be taking next Sunday off as I’ll be knee deep in New York Comic Con, but we’ll return with another Ghibli film the following week!

NEXT UP:  Pom Poko