We’ve grown close, right?  We share things?  Thoughts? Feelings?  I know about that time that you stole money from your mother’s purse and you know about the time that I accosted that homeless man.  What I mean to say is, we’re family now.  But the big thing to know about Jaysen Headley, the thing that his friends are pretty aware of, is that he has a very obsessive personality.  Yikes, I’m scared I’ll get down this path of talking about myself in the third person and not be able to correct it before it gets awkward so let’s just fix it now.  I fall head over heels in love with things fast and furious and once I do, I will be an undying fan for life.  That’s why, for a while now, I’ve wanted to do a segment here on the blog about the thing I am ‘head-over-heels’ for on a weekly basis.  This won’t be a review series or an in-depth analysis.  In fact, in most cases, it won’t even be something I’ve finished watching, playing or reading.  I’m coming to you mid-fall, as it were.  So let’s get started with our first entry, a little game for the Nintendo 3DS about lawyers, spirits and objecting with as much flare as possible.

Phoenix Wright: Ace Attorney – Spirit of Justice is the sixth installment in the popular Phoenix Wright series, but let’s say you’ve never heard of these games.  Phoenix Wright tells the story of Phoenix, a defense attorney who never gives up on his clients, and his two proteges, Apollo Justice and Athena Cykes.  The game plays out as what we like to call a Visual Novel.  Essentially, the grand majority of the game is spent reading.  This might sound boring, but in fact it’s quite excellent as I’ll explain in a moment.  The story is split into episodes in which some crime has been committed, the most innocent person in town is blamed and then you, as the attorney, must investigate the crime scene and then go to court, using the evidence you’ve dug up to try to punch holes in any testimony, in order to ultimately find the true culprit and get your client off. 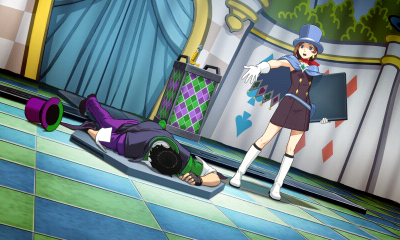 Ummm, is this how the trick goes?

There are a couple things going for this game right off the bat.  The first is all that reading that you’re doing.  It probably could be boring under normal circumstances.  But the writing here is top-notch.  All the characters are absolutely bat crap crazy.  From twin magicians to a forensic scientist who stress eats, I often find myself laughing out loud at the hilarity of this game.  Just when you think you’ve questioned the most insane witness yet, you meet some guy who is eating rat-ka-bobs during his testimony.  It ramps up quickly and every case feels like it’s own little story among a grander tale that is spinning at the same time.  And while the story is bleak what with all the murders and false accusations, it also manages to be quite endearing.  You’ll think about these characters and smile long after you close the system for the day.

The cases themselves are doozies.  And you, as the defense attorney, usually feel as though the whole world is against you.  In this game in particular, most of the story takes place in a far off land where Defense Attorney’s are seen as evil and are forced to endure whatever punishment their clients are given.  As you can imagine, there aren’t a whole lot of Defense Attorneys left in the kingdom of Khura’in.  In fact, there are none.  For the last 23 years, court has been decided by the prosecutor and a strange ceremony which allows the court to see the last moments of a victim’s death.  So yeah, a lot of false guilty charges.  Phoenix can’t have this so he jumps in to save the day.  But as the court battles ensue, you slowly start to unravel what actually happens and as you do, there’s this thrill that washes over you.  I have to say, it’s absolutely wonderful whenever I get that Aha moment and I know I’ve solved it.  Then it’s just a matter of time before the real culprit falls apart and admits guilt.

This need to figure out the case becomes addicting.  Despite each case taking several hours, I often find myself unable to put it down.  I’ll just talk to one more witness.  I’ll just finish one more piece of the puzzle.  I stay up late into the night trying to get that much further.  It’s hard to put down like any good book because the story, characters and mystery are all so well thought out.  And when you finally do get to that point of understanding how the murder really went down, there is such a rush of excitement because it really feels as though you actually came to that conclusion.  In many ways, each case feels like a big puzzle that you the player must solve and finding that solution is incredibly rewarding.

What makes the game even more thought provoking is that this isn’t your average court battle.  As they title precludes, there are many supernatural pieces to this puzzle.  The divination seance shows us what the victim saw right before death.  Apollo has a magical bracelet which allows him to see the ticks that show that a person in lying.  One of the characters can channel the souls of the dead and one of them has super incredible hearing.  All these things add up to create a unique fantasy that you won’t find in Law & Order.

Even if you’ve never played a Phoenix Wright game in your life, I strongly recommend this one.  It’s funny, captivating and addicting.  I am currently obsessed with it and even stayed up until 2AM last night playing.  That’s way past my bed time!  The mystery has me in love.  It’s the first thing I thought about when I woke up this morning and I’m sure it’ll spin you into its web of deceptions and truths if you give it the chance to do so.

The rebels are coming!

So that’s it for my first Totally Obsessed.  I hope to do this on a weekly basis to try and show off some of the things other than Disney that I spend my days swooning over.  Do you have something your totally obsessed with and want to share?  Let me know in the comments!  Perhaps I will look into it and also fall for it.  This series will cover a wide variety of topics: TV, Film, Books, Video Games and more, so feel free to let me know your current obsession!