Wow.  What a battle.  In what was one of the most intensely animated fights in the game, the Omnidroid has finally been defeated.  If you are still in the midst of welcoming Mr. Incredible, make sure to head HERE to my earlier post about him and everything leading up to the fight.

Keep in mind, while I think this goes without saying, there are some big spoilers in this post.

NOTE:  I used some gems to speed up the process in order to report here.  Even without gems, you should easily be able to accomplish all of this before the end of the event. The battle is quite intense and while we talked about this last time around, I just want to say that the animations here are fantastic.  Everything feels super epic which is important in a game like this.  We’ve been working towards this for weeks.  We need payoff.  The devs could have simply had the characters go inside the bot to fight it, but no.  They’ve painstakingly put together a really cool collection of animations to make this battle seem ‘worth it.’

Not only the battle is fun to watch, but also seeing the characters jump on the bot when the start a quest, and off the bot once they’re done.

Below are some stills of this awesome battle. After Defeating the Omnidroid

As soon as you defeat the Omnidroid, several things happen. 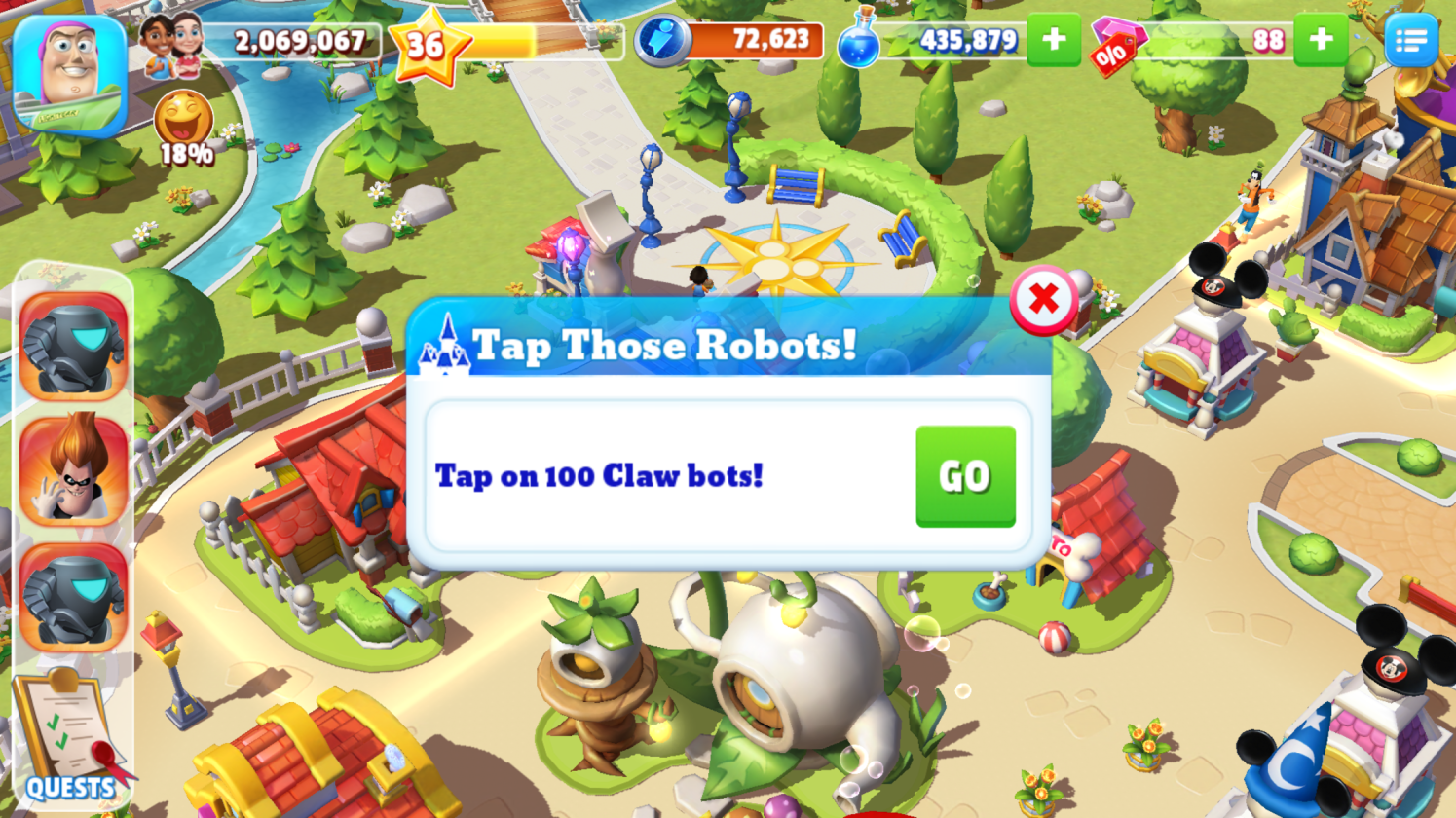 This is followed by another run of Claw Bots, 150 of them to be precise.  These respawn every 30 minutes and you can click 15 of them at a time. While the game doesn’t specifically tell you to do it, you can now place the Omnidroid City in your Kingdom. The City itself is ginormous so be prepared to say goodbye to a hefty amount of land.

Okay, let’s start with what Syndrome requires to be welcomed because it is a whole ton of stuff and it looks like we finally have a place to dump all those Incredicoins we’ve been saving up.

All in all you’ll need: 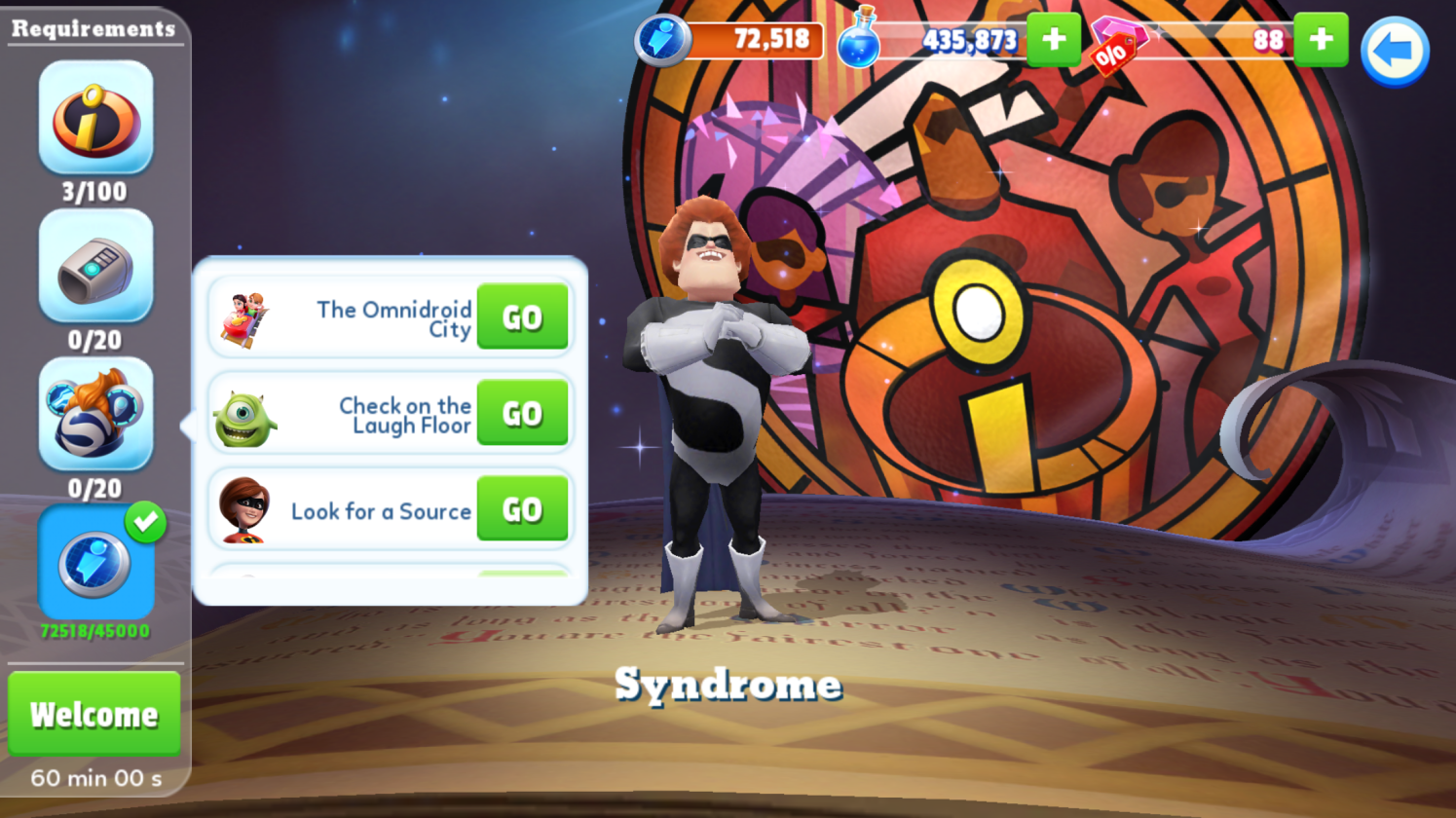 Most of the arm device quests will last you 2 hours, but they come hand in hand with Mr. Incredibles flyers to you can also use this time to level him up, which is important since you will need him at level 3 to help collect armbands as well.  The hats are going to take a bit longer, with all quests taking 4 hours, which the exception of Frozone, who only needs a 2 hour quest to obtain them.

Of course, keep in mind that BOTH of these are epic so the drop rate will be considerably lower than items for any of the other characters. Once you go through all of this, however, keep in mind that Syndrome only takes an hour to welcome so he’ll be yours in no time. One of the first quests you’ll be asked to do once Syndrome joins the Kingdom is to rebuild the Omnidroid.  If you already did, well, congratulations!  Life just got a little easier.  If not, you’ll be told to do so now. You’ll also be rewarded if you managed to pick up Frozone as well.

You’ll also get several new quests which involve interesting things like Mrs. going to buy groceries or Syndrome trying his hand at the obstacle course. It looks like this motley crew is going to be doing some fun sidequests for the side being.  Keep in mind that any character you welcome, buildings you place or decorations you purchase are yours to keep after the event.  I think that 10 days should be plenty of time to do all of this if you keep at it.  If anything else fun should pop up throughout the week, I’ll make sure to post it on the blog.

Until then, happy playing!