Now as you all know, we are currently in the midst of a bit of a slump for Disney as they try desperately to find a way to change with the times and go into the digital age.  That being said, this movie is all about a dog and dog’s happen to be one of my weaknesses.  I am going to try to be non-bias.  I really am…BUT HE’S SO CUTE!  I JUST WANNA SQUEEZE HIS LITTLE CHEEKS AND…ahem.  Okay, calming down.  Bolt is a movie all about a dog who thinks he’s in a movie, but actually to him the movie is real life and real life is quite scary once you enter it after thinking that you are in a movie for so long.  Bolt gets points for a lot of things and one of those is definitely originality.  While some of its story lines come off a bit too simple, Bolt is a fast and furious action film with a lot of heart and is easily the best CGI film to come out of Disney yet.

Yes, tell them of how excellent our movie is. TELL THEM!

Originally tagged as American Dog, and directed by Chris Sanders, Bolt saw its fair share of changes during production.  The original story was about a TV-Star dog named Henry who ends up in the Nevada desert with a one-eyed cat and a radioactive rabbit.  So basically, this was originally Mad Max for animals.  When Lasseter took over, he asked for aspects of the story to be changed.  Sanders resisted and was thus replaced.  At this point, the creative team was told to finish the film in 18 months, which was a far cry from the four year schedule that most computer animated films were running on at the time. 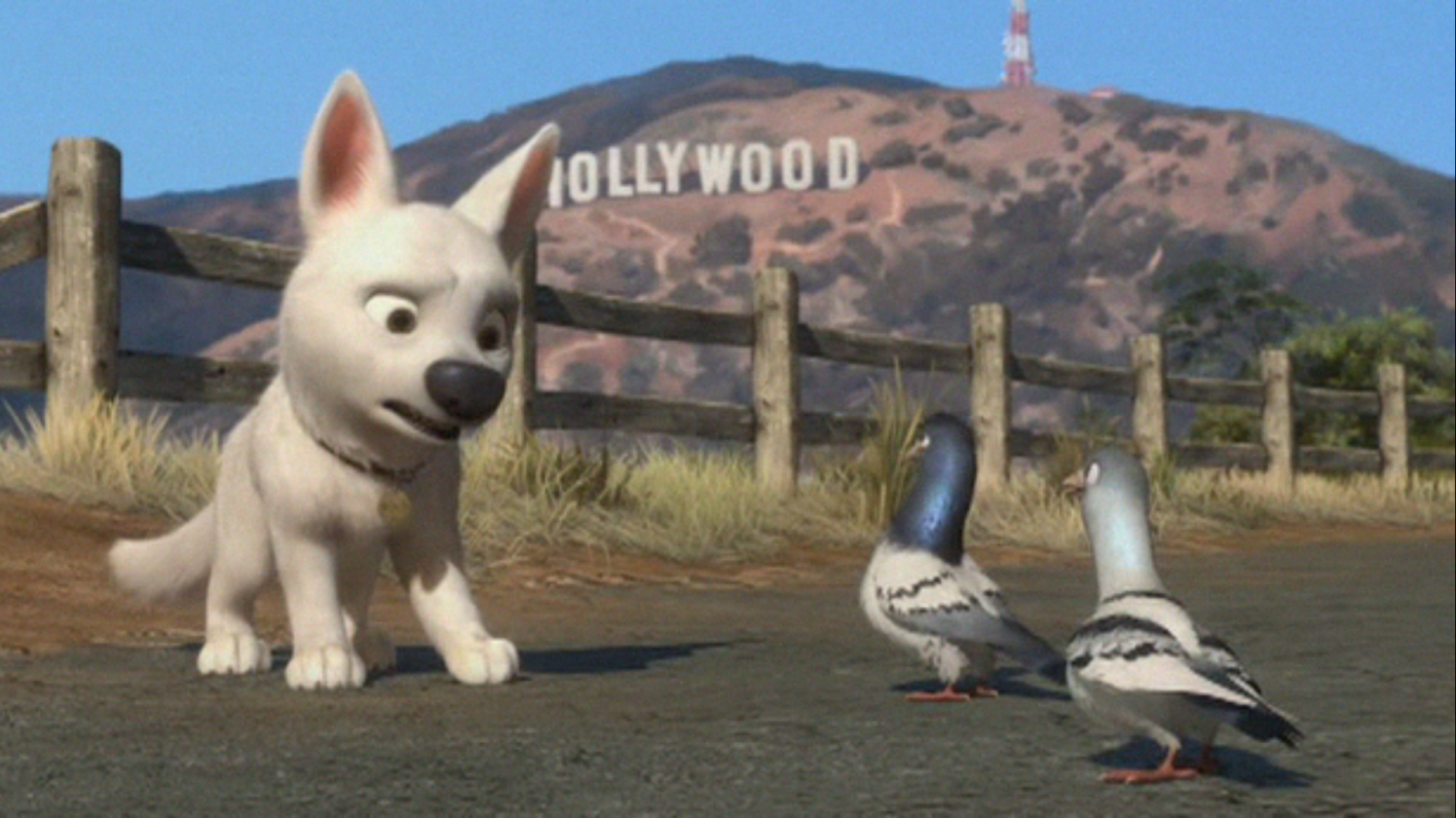 Henry? My name was almost Henry??

I usually save my critique for later on, but I want to throw it out now because it really colors everything else I feel about this film.  You really have to admit a lot of knowledge gaps in order to believe this movie.  You have to get around the fact that Bolt has somehow forgotten when he was younger before he got involved in this movie business so much so that he now believes he is super.  You have to believe that any film or TV show could shoot these crazy action sequences in one shot.  And you have to believe that Penny and her mother would put up with this much crap from a studio.  If you can get past all of that, it’s a fun film, but throughout all the things I liked, the big plot holes stood out significantly.

So you really don’t know you’re not on TV?

Luckily, the three main characters are a lot of fun.  Bolt is a character who I really like because he really exemplifies this idea that if you believe it, it can happen.  I’m reading this great book about Disney Land by Jeffrey Barnes called The Wisdom of Walt Disney.  In it, he talks about how the reason that Walt made Disney Land was because he had no idea how difficult it would be.  He was ignorant to the challenge and thus he was able to accomplish it.  I think this is true of Bolt.  Once set out into the real world, despite being unable to have super powers, he still manages to be pretty super simply because he believes it to be true.  I think that in itself is a great lesson.

Mittens is also a great character.  As a sidekick, she has a very tried and true mentality.  She lives free because the world gave up on her so she turned her back on the world.  I love that she’s so practical and the moments when she is teaching Bolt how to just be a happy dog were some of my favorite.  I think its great to see her be the voice of reason and she’s so snappy and sarcastic that most of the best jokes end up being hers.  Rhino walks a fine line of being almost too annoying, but luckily he has a lot of heart.  Rhino’s belief in Bolt is just as important as Mittens’ reality check and these two sides of one coin really help complete Bolt’s character so that even though he doesn’t have super powers, he can still be super in the end.

Well this is awkward.

It would be completely ridiculous of me to talk about this film without talking about the best part, which is the action.  The action sequences in this film are spectacular and up there with The Incredibles.  From the opening scenes of Penny and Bolt running from the baddies to even moments like the animals trying to stay on board a moving train, this film really has a great pace and is constantly engaging while still finding moments to make us feel something.  The explosions are big and the camera flies through everything making it all seem that much more real.

This really is the best looking of the films in Disney’s CGI lineup to date.  In fact, I’d go so far as to say that there was a huge leap between Meet the Robinsons and this.  Everything looks great and it really feels as though the digital age has finally come.  The animals move wonderfully and at no point did I think, Wow, this looks dated.  There’s a real crispness to this film.  It seems like a Matrix movie but with animals and that’s a good thing.  I like that Bolt is an action star on and off the screen and that the film really never lets up in that regard.

One of the more awkward action scenes.

Bolt is at its best when it tells a human story about a little girl who wants to get her dog back and a dog who must learn that you don’t have to have powers to be a hero.  It works least when it tries to over complicate its story, which sadly happens more than I’d like.  Yet even so, of the three CGI films we’ve had so far, this is BY FAR the best and at times it really sores.  I love the ending where Bolt barks in order to alert the firemen to him and Penny.  It is so powerful to see him take his Super Bark stance in order to save the two of them.  I also love that in the end, fame, fortune and money don’t matter in the long run of happiness.  All that matters is that they are all together as a family.  And also, I love seeing the casting agent get thrown out of the back of a car because man that guy is a jerk.

We are nearing the end of this series so quickly!  Next up is a film about a girl and a frog and it marks the start of Disney going up hill again.  I’m excited to finish this project so that we can move on to even more fun things, but the bitter end feeling is already creeping up on me.  Let’s make the most of these last few films, shall we?

NEXT UP:  The Princess and the Frog