We’ve talked a lot about Disney princesses here at Vault Disney, and believe me, that’s not going to change anytime soon. But what about the leading men? So far it’s been pretty dry in these streets. Sure, we had a talking fox and some mice who acted like old fussy men. We’ve had some prim and proper princes and of course, Beast, who might just be the best so far. But today, we’re going to get to know a leading man who isn’t so prim and proper. A guy who’s suave and kind. A male Cinderella in some ways. Based on actors such as Tom Cruise, Harrison Ford and Calvin Klein models (No I am not kidding) today is all about Aladdin.

Okay calm down, it’s not that scary. We’re going to get through this together. PS: Is the Sultan giving him a pedicure?

Howard Ashman, before his passing, pitched the idea of Aladdin but in a form that we probably wouldn’t recognize if we were to see it today. The Genie was quite different and Aladdin was teamed up with several friends who came along with him on his adventure. Disney didn’t love the treatment and instead put Ashman and writing partner Alan Menken to work on writing the songs for Beauty and the Beast. Linda Woolverton, who had written for Beauty and the Beast, joined Aladdin and started working on a treatment. Soon after, hugely successful directors John Musker and Ron Clements would choose Aladdin to direct, from three projects offered to them. One of these was a film which would eventually become The Lion King. 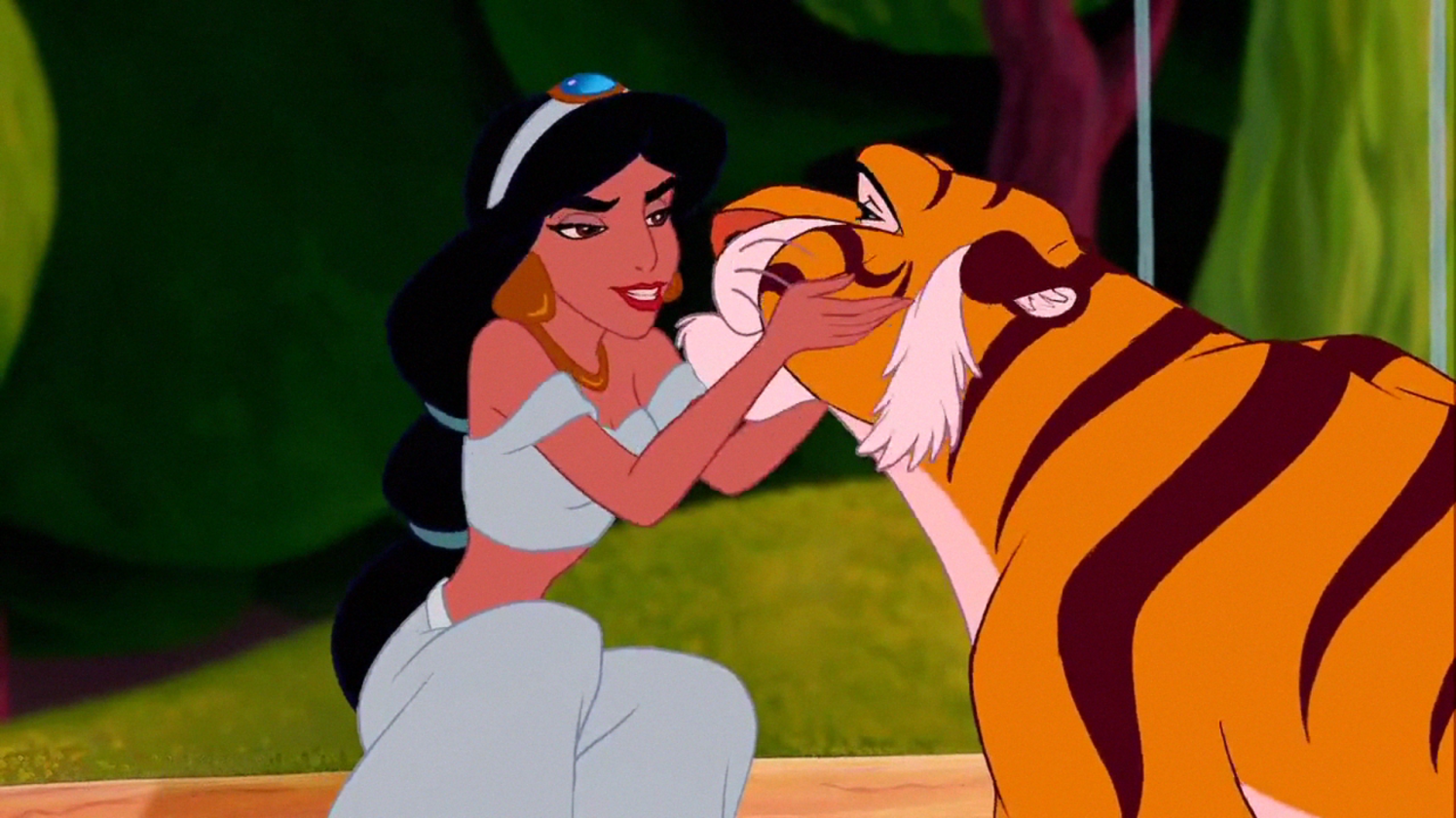 Musker and Clements had written a full draft of the script, but Jeffery Katzenberg wasn’t thrilled with it and ordered the entire thing to be started from scratch, but with the same deadline as before. The staff would remember this day lovingly as “Black Friday.” Many changes were made, including losing Aladdin’s mother as a character and making Aladdin more of a hotty hero. Essentially, his design was changed from being based off of Michael J. Fox, to being based off Tom Cruise, and as I mentioned before, Calvin Klein models.

Your face when you realize Aladdin isn’t real and thus can’t be your boyfriend.

Robin Williams ad-libbed most of his lines. He was often given a topic and a handful of suggested dialogue and then set loose in the recording booth. When edited, Eric Goldberg, the animator of the Genie, went through and picked out his favorite lines to include in the film. Williams voiced Genie for a mere $75,000. To put that into terms we might understand, for an actor, you can consider this sort of like minimum wage. The stipulations of this were that his name not be used to directly market the film and his character not take up more than 25% of the space on posters and other marketing materials.

Do these things Disney, or face my phenomenal cosmic power!

Disney went back on this deal in the end. Yes, the genie was only in 25% of the poster BUT all the other characters were made to look very small, thus the genie looked like the star. Because of this, Williams and Disney had a falling out and he refused to voice the Genie for further direct to DVD sequels. Eventually Katzenberg would leave Disney and Joe Roth, who replaced him, ordered a public apology to Robin Williams. Williams then returned to voice Genie for the sequel King of Thieves, this time being paid significantly more. Ohh! Look at that paycheck!

Aladdin is a pretty excellent film and there’s a lot of good to be had here. I have a minor complaint and we’ll get to that in a bit but let’s start off with some good. In many ways, this is a fast paced action film, full of adventure and tension. As such, there is a great pace to the story. We are always running through the streets of Aggrabah or dodging death or flying on a magic carpet. There’s a lot of wonder to this world and it’s great to see a kingdom with a different look and feel to all of those we’ve seen before. This is a much more dangerous town than any of our former stories of princesses. Danger lurks around every corner and there isn’t only a ruling class. There’s a seedy side to this world and I think that’s great. Don’t get me wrong, this film still has a lot of glamour, but it’s a nice change to see a world which feels more as though it is living and breathing.

This guy likes to live and breathe up in people’s personal space.

I quite like Aladdin as a main character. He’s instantly charming and he’s the kind of guy that we want to root for. I like that his weakness is that he’s ashamed of himself and doesn’t see how great he is. It’s nice to see a guy who thinks he’s not good enough for the girl he likes. I think we often see this story in the reverse, especially from Disney, so it’s a good touch. Aladdin has a great heart and he always wants to do the right thing, but he’s human so sometimes that isn’t super easy. I’ve talked about character arcs before and how important they are, and this is a good example of a character who follows through very well to a point of having to conquer his demons and see the error of his ways before he can save the day.

This will go perfectly with my china set at home!

If you’ve been reading this blog for a while, I bet you’re expecting me to say that I don’t like Jasmine. I suppose you think I’m going to complain that she’s weak and a poor role-model for young girls. But you know what? I don’t really think that. I sort of like Jasmine actually. She’s got a pretty tough soul and she’s clever. She’s also not afraid to speak up and she doesn’t let anyone push her around. I think she’s pretty great actually. Especially when compared to Ariel, who might be my least favorite princess at this point, Jasmine really shines as a character. Do I wish she’d had a little more of a presence in the defeat of Jafar? Sure, but that really should have been left to Aladdin. Yeah, these guys fall in love on the first date, but at this point Disney, I’ll just accept it and move on. Why are those birds so angry by the way?

Despite his contract of not being the front man, the Genie is really the star here. His antics and dialogue make the film, and his craziness is the thing that is the most memorable after the fact. He’s zany and out of control and every time you watch the film, you’re sure to catch a new joke. This is a comedic genius showcasing his talents and it’s amazing. Robin, your legacy will be with us forever thanks to this film and others and I can’t praise your work here enough. Somewhere out there, there will always be someone smiling because of you.

All the smiles all over the world.

Jafar is a great villain. He’s all about the power and he’s sinister as they come. Iago might be the thing that makes him though. Iago is hilarious and I found myself cracking up pretty often at his dialogue. He’s also pretty intelligent. Often times, we see lackies that are stupid or disposable, but Iago is clever and comes up with just as many villainous deeds as Jafar himself. Together, these two really shine as a force to be reckoned with. Iago! Watch me catch this firefly!

I mentioned a complaint, and it’s minor. I think that after watching so many Disney films, a lot of things start to feel all too familiar and I started to feel that a lot here. Jafar turning into a snake is so similar to Maleficent becoming a dragon. Aladdin feels a bit like a male Cinderella. The film often feels familiar without even trying to be. Even parts of “A Whole New World,” start to sound exactly like “Beauty and the Beast.” Like I said, it’s so minor but every now and then I definitely felt deja vu and that’s not always a good thing. 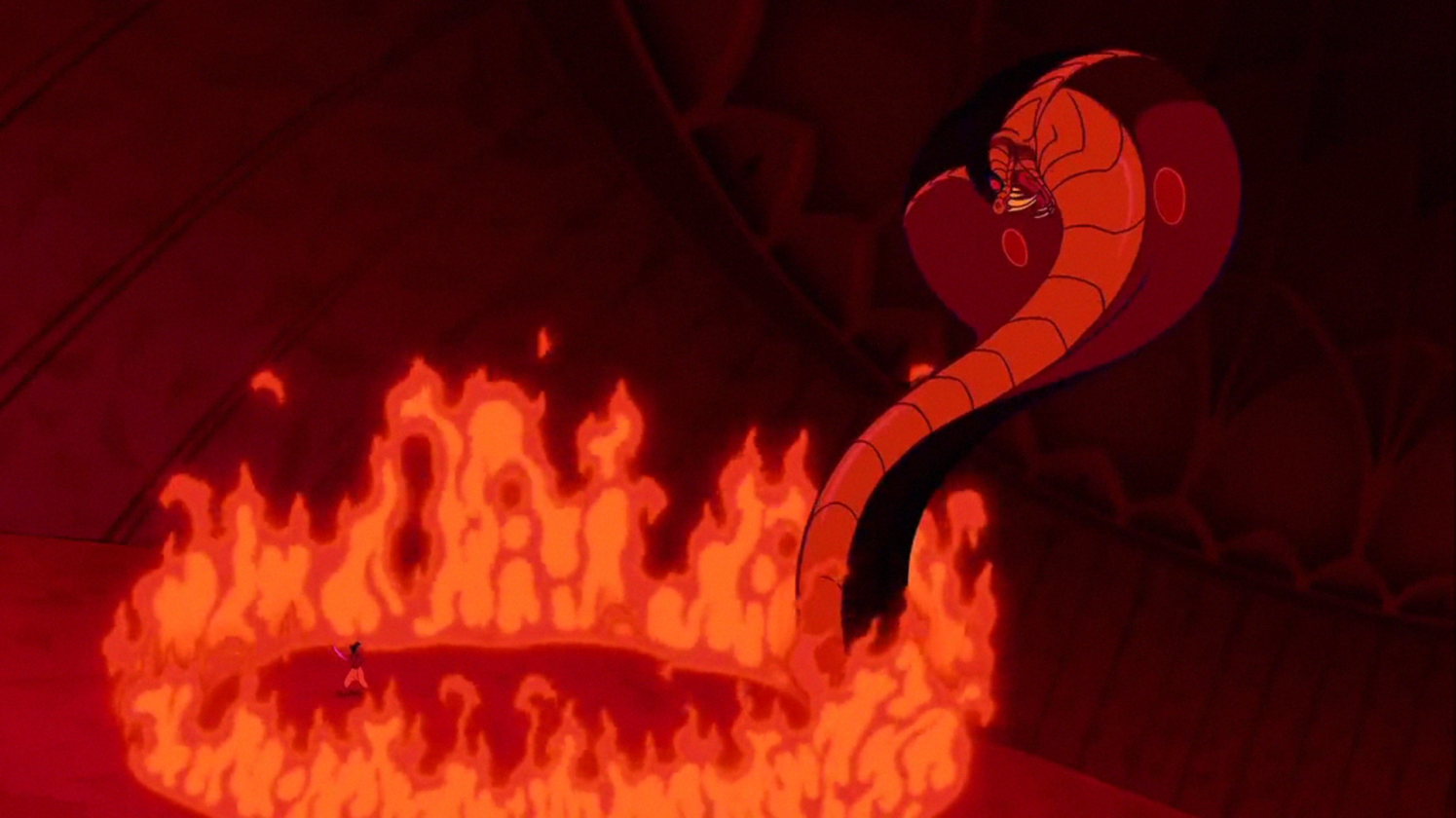 I will stop you from getting to Aurora…I mean Jasmine. Errrr…

Overall though, Aladdin is an excellent film. It’s got adventure, style and a great soundtrack. The story and characters are all solid and it manages to garner quite a few more laughs than films in recent memory. I’m glad to see Disney moving into the more modern age here and creating male and female characters which are tough and use their brains to overcome problems. I also like that in the end, the message is that doing good for others is always the best answer. After all, the sultan can always change the law. Wait, why didn’t he offer to change the law before all of this? Oh dear. It’s fine, move along. Nothing to see here. That’s all for this magic carpet ride.

I will surely post something on New Years but in case you only read this blog for the Disney, I want to say thank you to everyone who has made this year so special. Writing this blog has become a big part of my life and you guys make it so worth it. I can’t wait to see what kind of trouble we all get into next year. Have a happy and safe New Year!

Next Up: The Lion King