Oo De Lally! So begins our next ten Disney films. A lot has happened so far. We’ve had lost puppies and dwarfs, adventures in Brazil, adventures in the jungle, lost boys and princesses. Now comes something entirely different. Robin Hood is the first film on our list to use fully anthropomorphic animals (Also congrats to me because I spelled that word and no spellcheck red line of hatred popped up!) Robin Hood is also the first film on our list to have a song with no words that got stuck in my head for days after. I’m looking at you “Whistle-Stop.” While Robin Hood is critically considered one of the less perfect Disney films, I believe that a solid story, fun characters and a lead with charm to spare make this one of the most fun and original that we’ve seen so far. 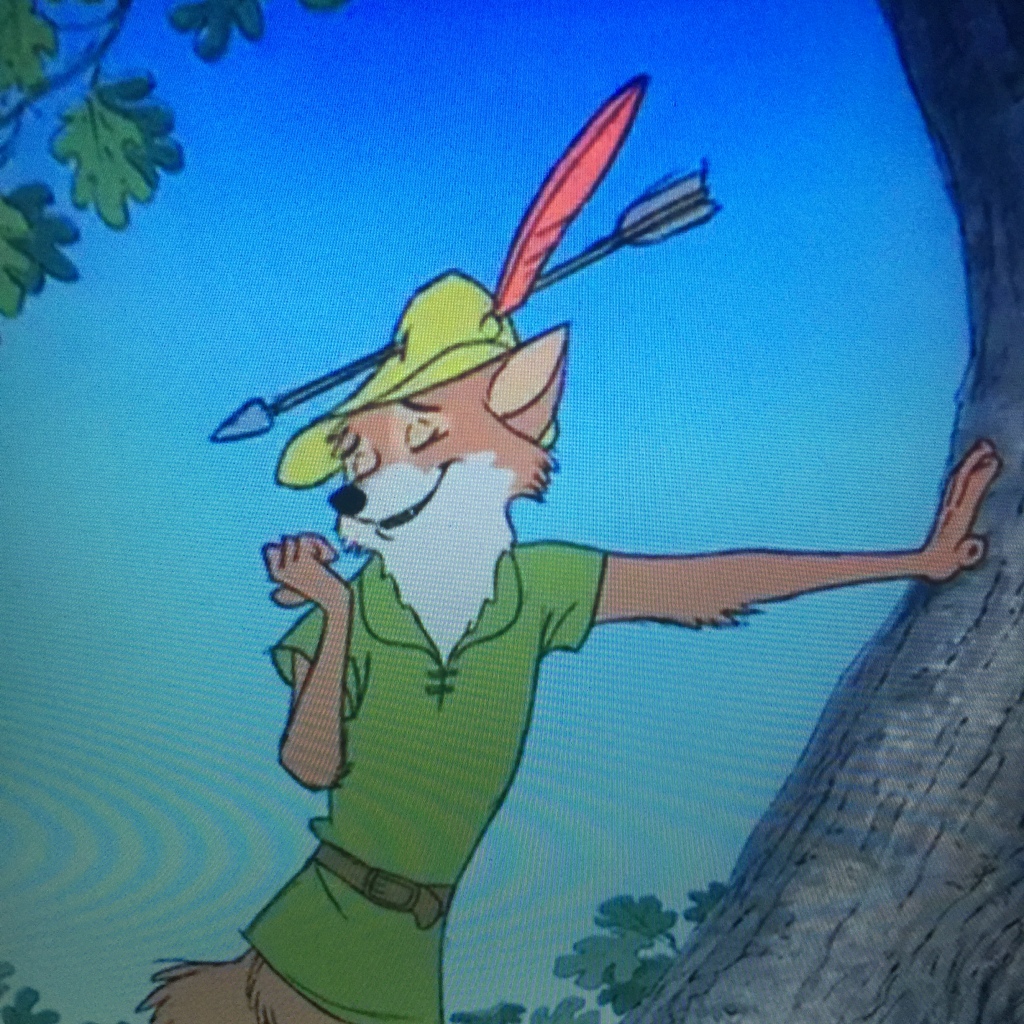 I’ve also got perfect nails, but no one ever talks about that.

Let’s get this out there right off the bat, Robin Hood is my favorite adult male lead in a Disney film so far. I say ‘adult’ because I don’t love him more than Mowgli or Pinocchio, but I do think he’s lovely. Why is he so lovely, you ask? Well, for one, he’s not a bad soul that needs converting. He’s not a womanizer or a man about town. He’s not obnoxious or full of himself, well not really in the ways that count. What he is, is a man who loves one girl and knows that he loves her. He’s a guy who literally risks his life to help the poor and he’s a guy who only boasts when he’s actually good at something but constantly reminds his friends who are so thankful for him that he wishes he could do more. Robin Hood is the kind of person I think girls should like from these films. Take that Prince Charming. Eat it Peter Pan. 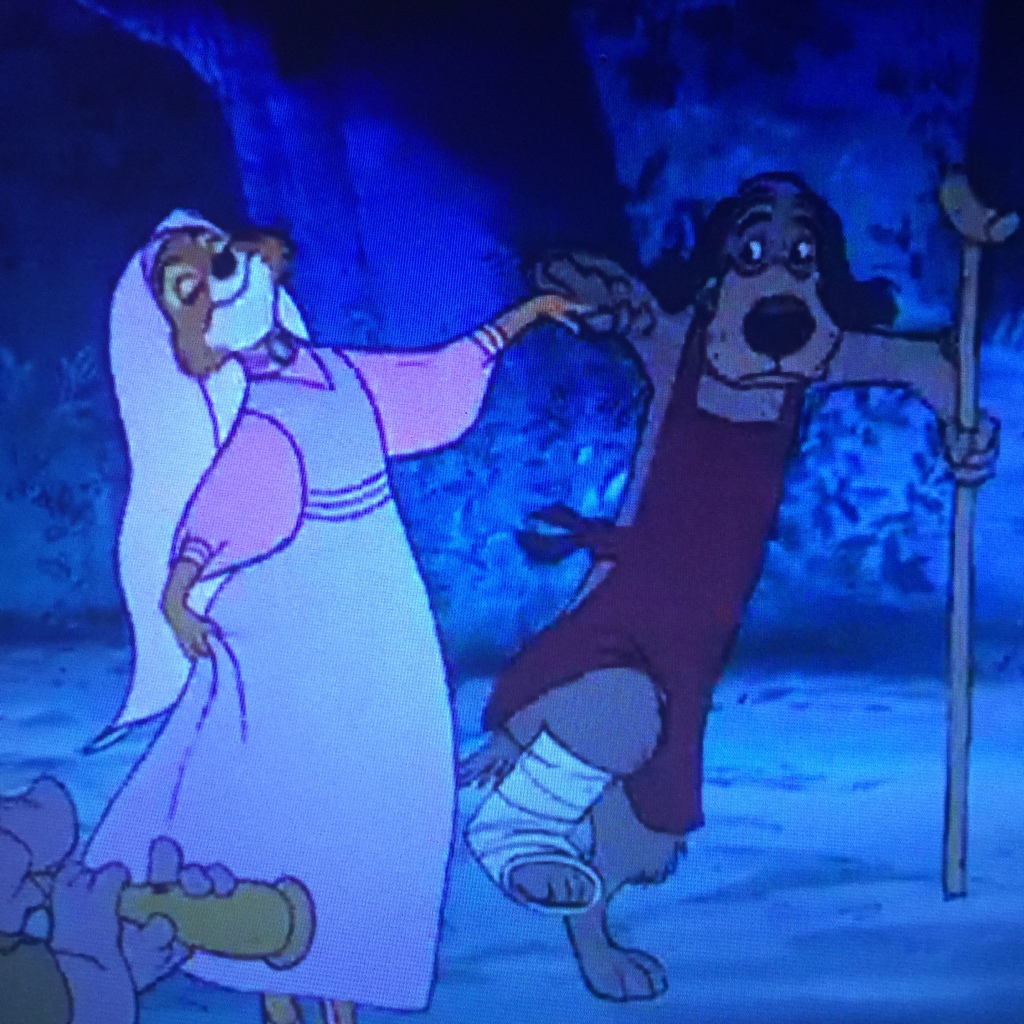 Maid Marian, I think you’ve got the wrong canine there.

Robin Hood was initially a film about Reynard the Fox, a fox found in many European allegorical tales who spends his time tricking others to get what he wants. Walt, who was still alive during pre-production, thought that Reynard wouldn’t make a compelling enough hero, so the idea was shelved. Ken Anderson later pulled many of his sketches and ideas from Reynard when composing Robin Hood. However, a lot of debate arose during the production and Ken was sad to see many of his fondest ideas go away. He wanted the Sherif to be a goat as he found that the motif of using a wolf as the villain had been done too many times. Alas, when push came to shove, the wolf got the role. 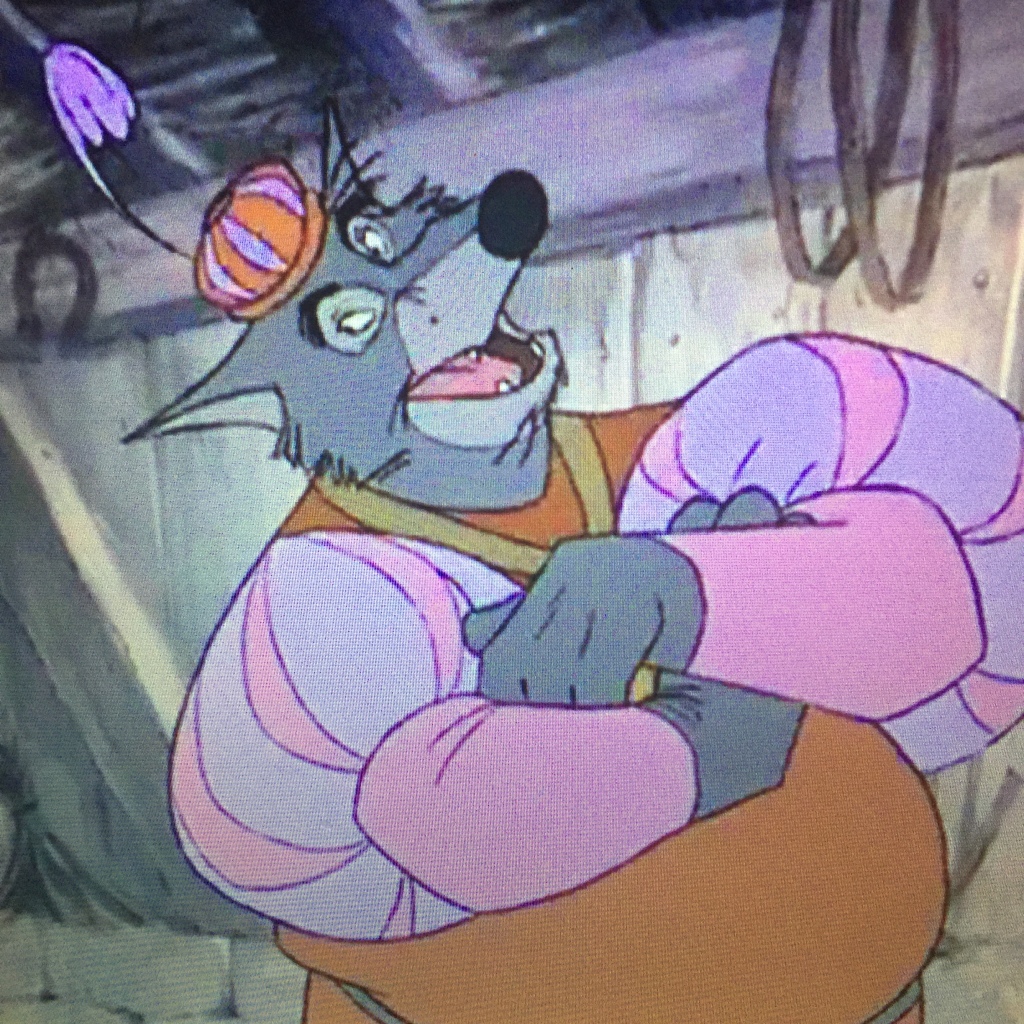 Because obviously wolves are more sinister than goats. OBVIOUSLY!

Something that Robin Hood is criticized for often is its use of recycled animation. Basically, animators take an animation sequence which is already finished and then trace over it and re-ink to make a new image. It’s cheap yet effective and given the very limited budget of this film, the process was used quite often. In fact, the sequence of the song “The Phony King of England” is almost entirely made up of recycled animation. From The Jungle Book to Aristocats and most notably Snow White, this segment pulls from all of them. I can’t really describe the amount of recycling used on paper so I’ll just leave this video from youtube, which is not my own video mind you, to show you what I mean. It’s a little bit crazy to watch, so be warned.

I love the story of Peter Ustinov in this film. He voiced both Prince John and King Richard and near the end of production, it was realized that he needed to record several lines. The studio searched far and wide, making calls all over the world to locate this man who was so elusive. When they finally tracked him down, he was in a studio recording another film…in the same lot as Disney Studios. Talk about over spending.

Isn’t it hilarious Hiss? They wasted all that money!

Robin Hood is a pretty dark film. I think it’s fortunate that these are animal characters because seeing children and elderly humans locked up and chained the way that these animals are might be too heartbreaking to watch. Here we have the story of a Prince who wants the crown so badly that he has his snake friend/pet/punching bag Sir Hiss hypnotize his brother the King so that he goes out on a wild quest. Prince John then usurps the crown and treats everyone in the land like poo poo, pulling all their money for taxes. Along comes Robin Hood, a brave soul who steals from those who have too much, Prince John and the evil Sheriff of Nottingham, in order to give it to those who have very little. It’s fun to cheer for the thief and boo those in charge and the film makes sure we know who the good guys and the bad guys are early and often. 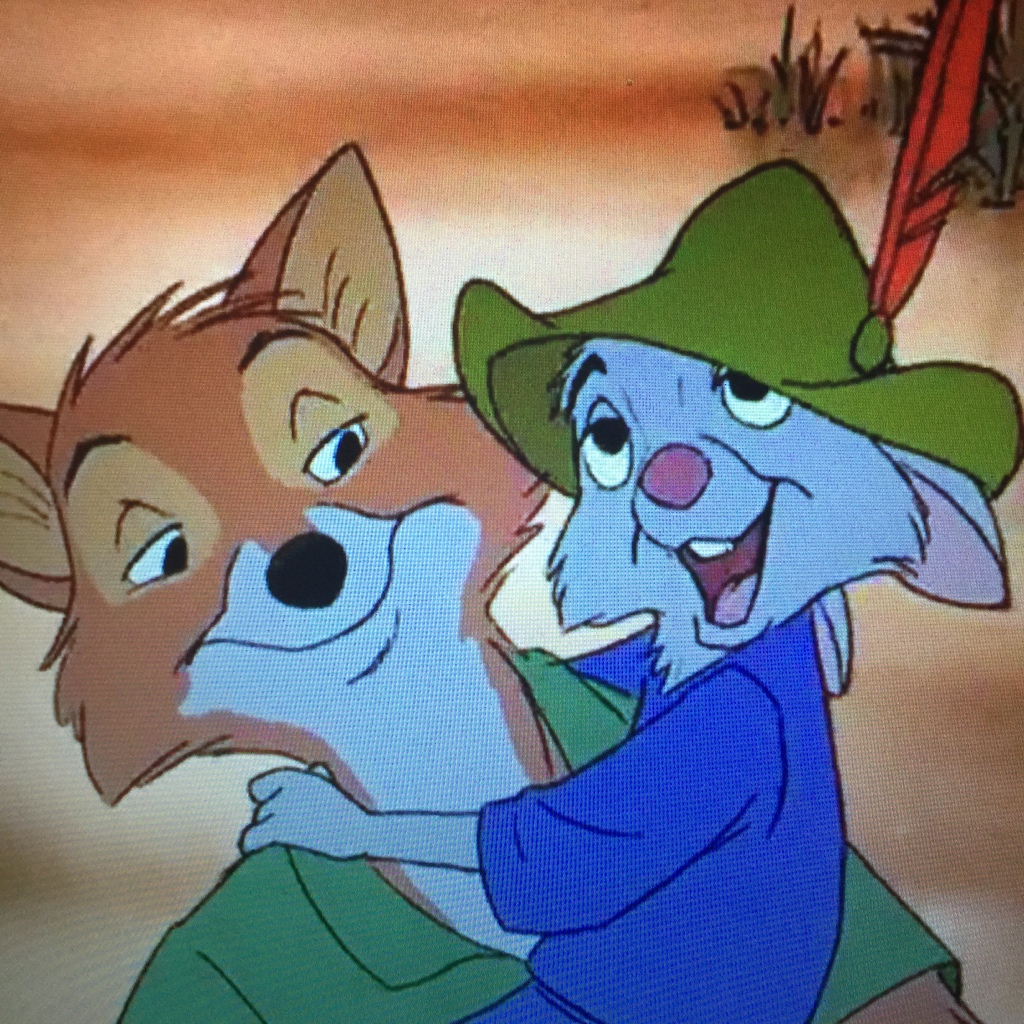 When I grow up, I’m gonna be just like Robin Hood…homeless and convicted of treason!

Robin himself is actually in less of the film than I would expect. We often cut away from him to see scenes about Friar Tuck, tending to his church, or Maid Marian, Robin’s secret childhood crush, playing games with Lady Kluck and several children from the town. Because of this separation from Robin, we end up getting a much more fleshed out supporting cast. More than that, the stakes feel higher. Friar Tuck being shackled and taken to jail is painful to watch because we love this character the way we love Robin. He’s given enough life and story to make us care and that’s a good thing. 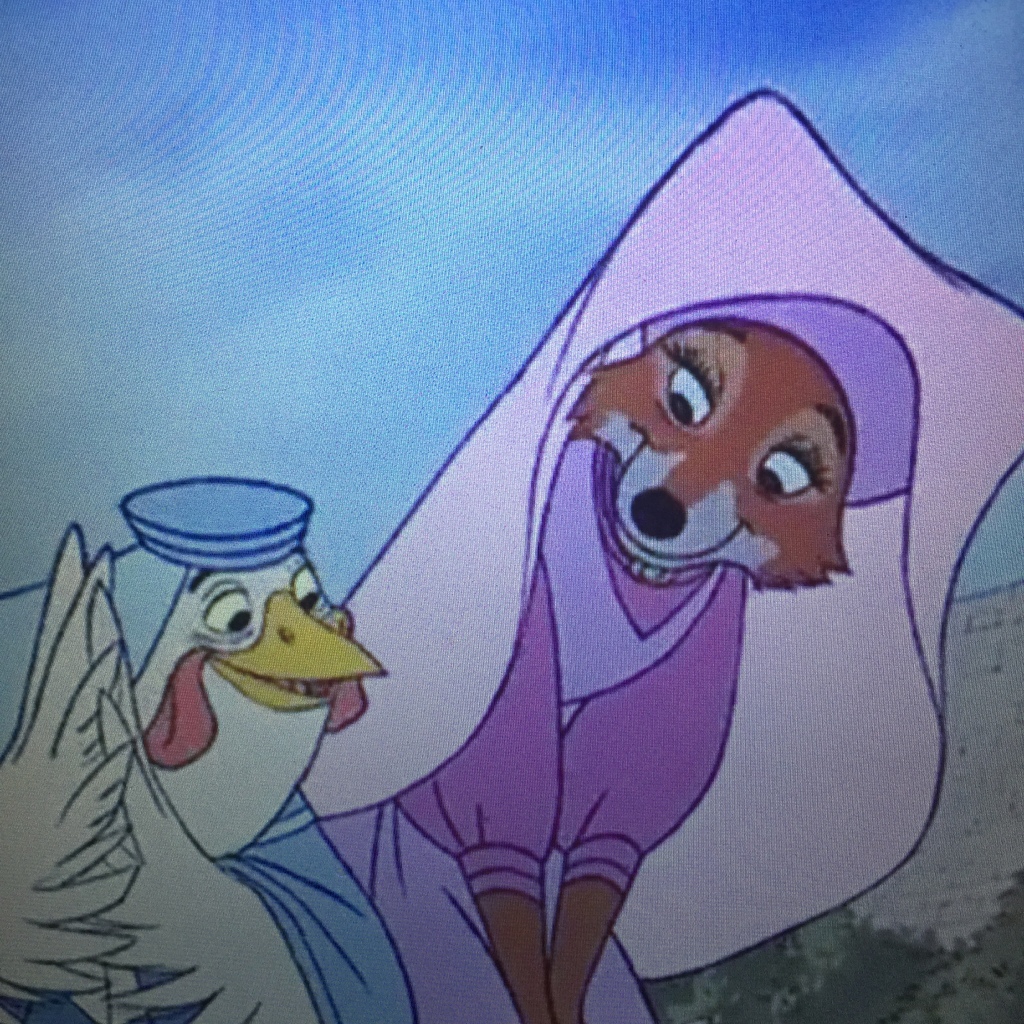 So is Lady Kluck your real name or just your drag name?

The film seems a bit like Disney’s version of an indie flick. The songs are laid back and acoustic and the story is very character centric and quieter. It doesn’t have the grandness of many other films. Often times, this is a critical point for saying that the film is less than many others, BUT I like that’s it’s slower and quieter. It feels deeper and less about the spectacle and that has been rare on our journey. 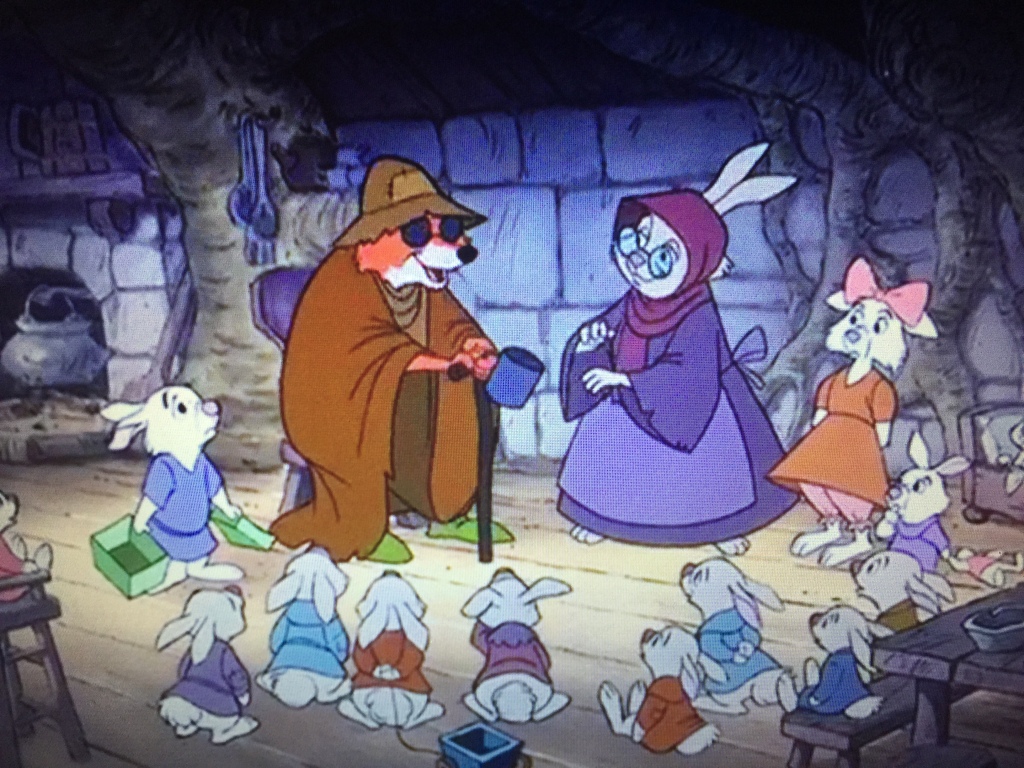 This entire scene is shown just to make us invest in the side characters whom Robin protects.

Prince John might just be the most annoying part of this movie. Remember when we watched 101 Dalmatians and I mentioned that I didn’t want to hear Rolly wine about being hungry anymore? That’s how I felt about Prince John calling for his Mommy and sucking his thumb every five seconds. We aren’t supposed to like him and that’s the point but he almost seems too dumb to actually be capable of his scheme with his brother. Are we to believe that this imbecile came up with hypnosis as a means of quest giving? I just don’t buy it. 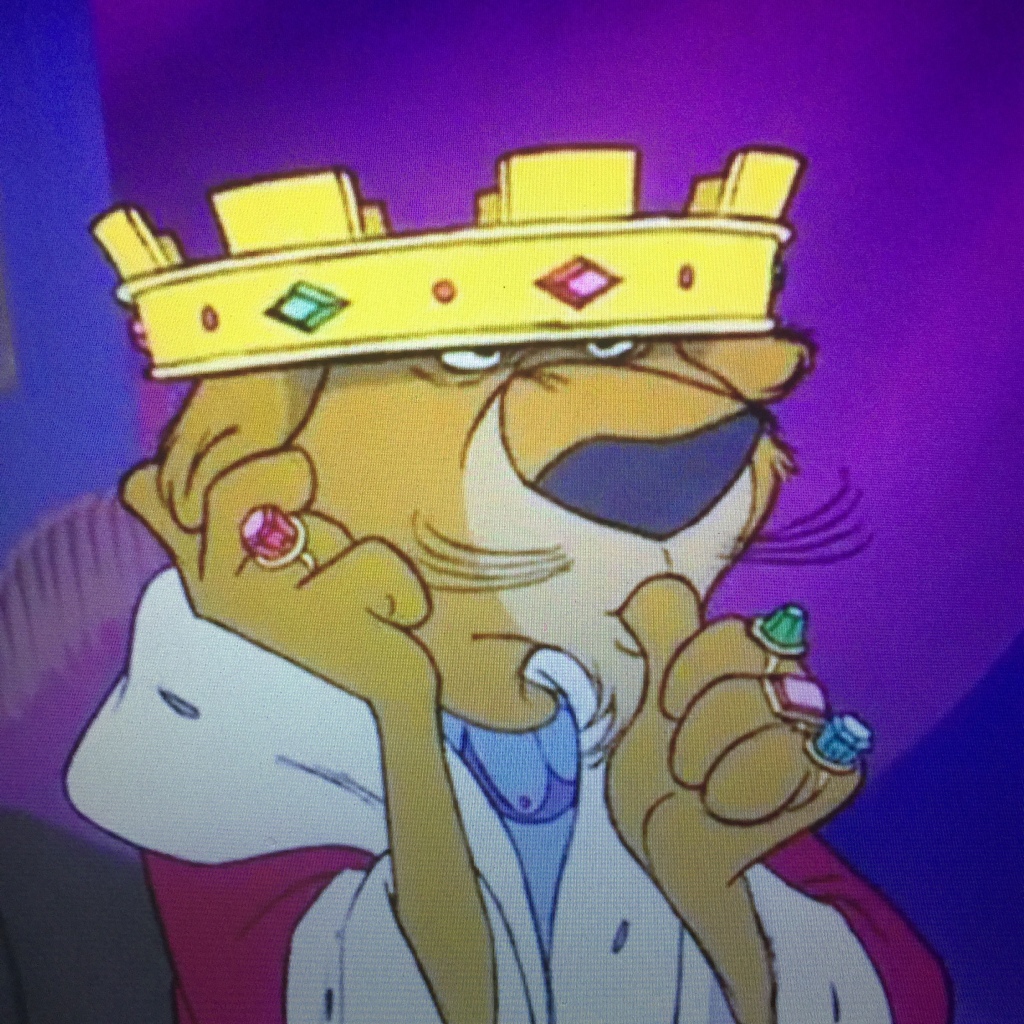 The Sheriff on the other hand is low, conniving and sinister and he makes a much better villain in many respects. From taking money from a child on his birthday, to looting the poor box, The Sheriff is the most evil person in this film and I’m glad that he really has the final moments with Robin, setting fire to the castle and almost killing him in the process. 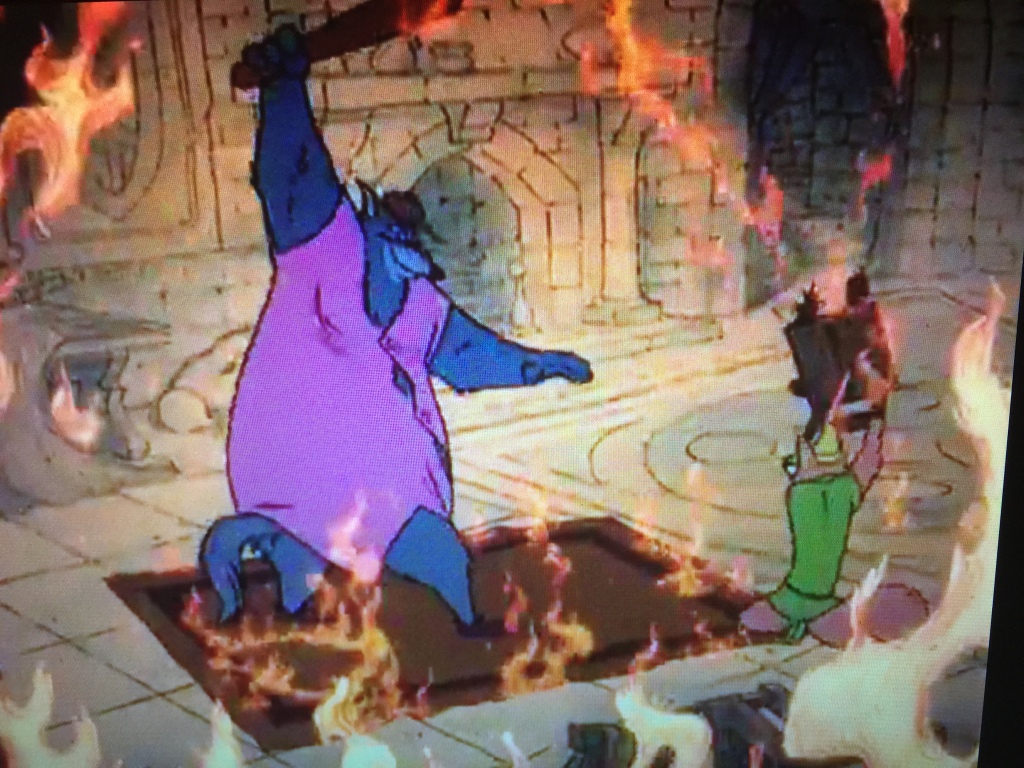 See! I told you wolves were evil!

The film actually has an alternate ending, which was released with the Most Wanted home edition of the film. Essentially, we follow Robin, who is injured by his fall from the tower, to a church where Prince John and Hiss try to kill him, again, only to be stopped by King Richard who shows up just in the nick of time. I’m glad that this was cut as it mostly just rehashes the rest of the film and by the point of Robin jumping from the tower, I think we’ve reached the most climactic this film is going to get. 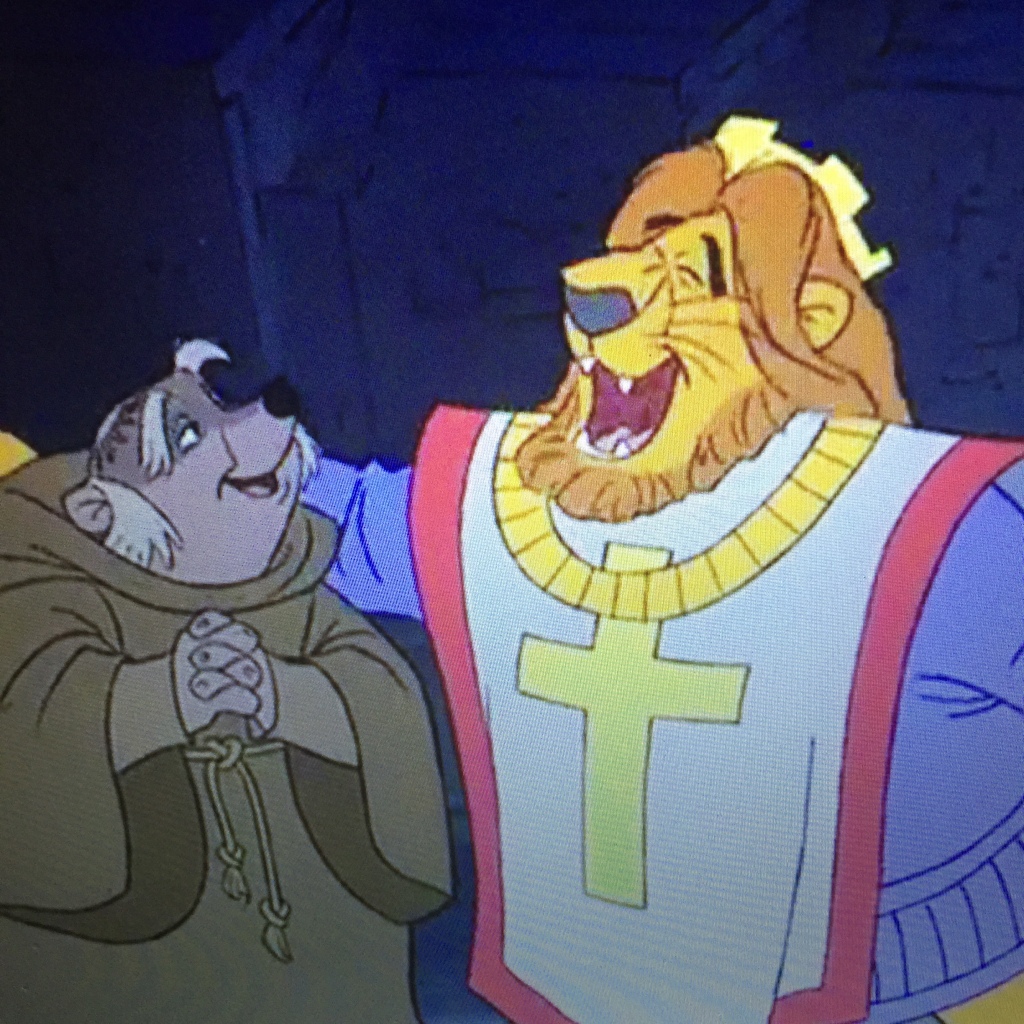 But more of this lovable guy would have been more than welcome.

Robin Hood is a dire affair, complete with mice, bunnies and raccoon families being chained up and lots of dark circumstances involving characters that we fall in love with very quickly. It’s a fair bit more epic than our previous few films and it returns to a simpler age, which was what made films like The Sword in the Stone so special. Say what you will about recycled animation but it worked for Robin Hood, making it extremely profitable for the studio. In later years, this film has been called one of the lesser Disney films but as I said before, I think that is a huge understatement of this film. It has class and style and characters which are more memorable than several films we’ve seen before in this series. It’s music is wholly unique and we finally get a male lead who doesn’t only think with his wolf parts.  See what I did there? Everything about this film pops for me and I was glad to be reminded of its excellence. The next ten films could hold all sorts of surprises but I’m glad to say that Robin Hood started us off on the right foot, er, paw. 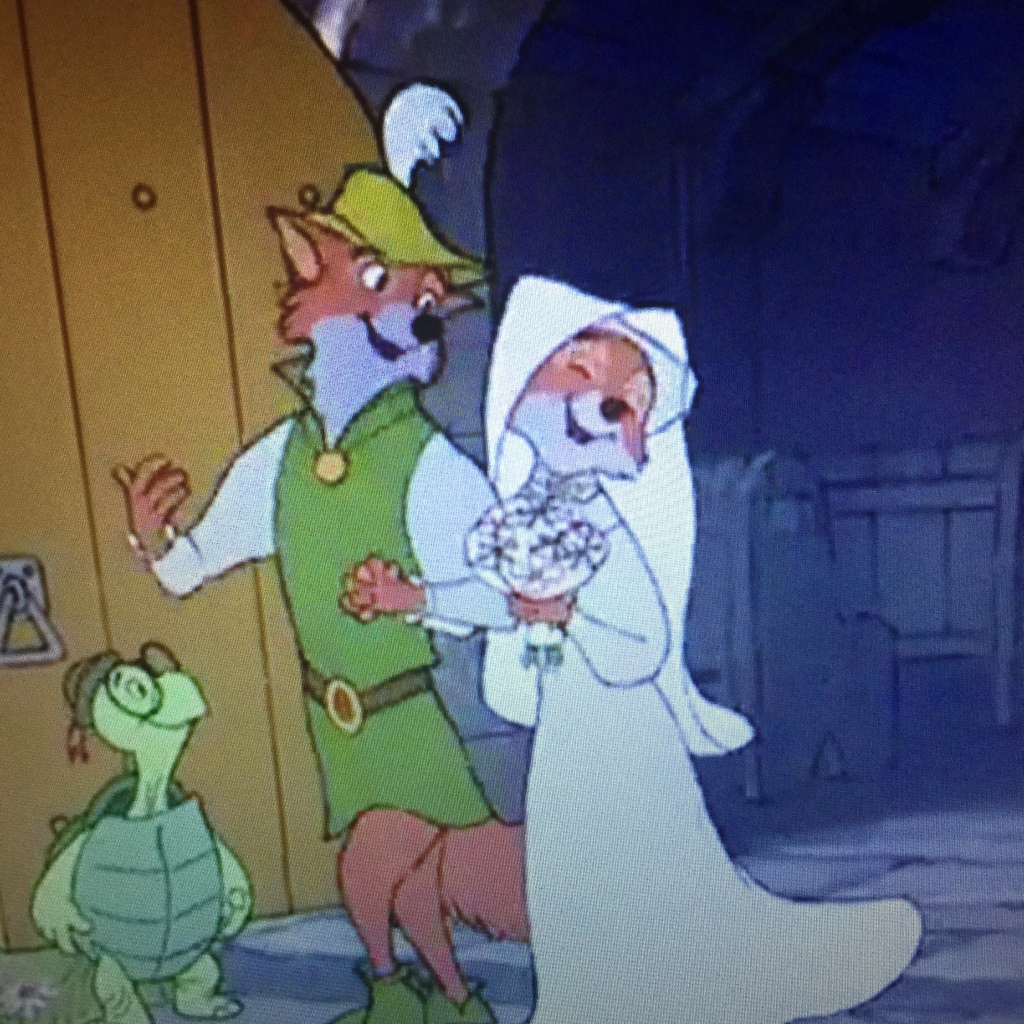 Excuse me turtle boy, we’ve got to go mate like foxes!

Next Up: The Many Adventures of Winnie the Pooh