Our Trip to Hogwarts Pt. 2 – The Butterbeer Chronicles

As you may have noticed in my first Wizarding World article, one of our favorite parts of the park was the delightfully lovely Butterbeer drink. The drink is a perfect mixture of butterscotch flavors and a creamy, marshmallow like topping. It is served two different ways, cold with ice, or slushy. We’ll get more into the history of this drink later in the article, but like so many others, as I left the park I had one goal in mind. I would learn to make this amazing beverage at home. 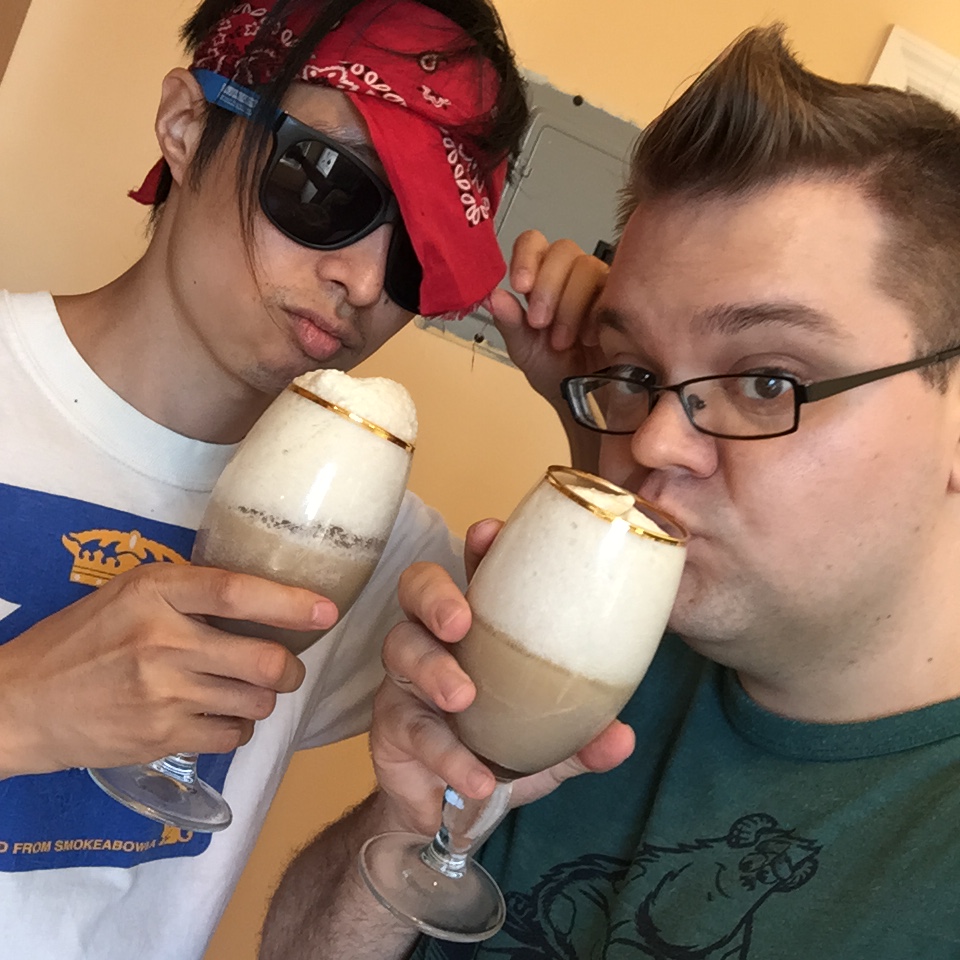 We make being nerds cooler than ever.

Here’s the problem with Butterbeer. It’s made-up. It is a completely fictional drink for the purposes of the the Harry Potter universe. Problem number 2 comes from the fact that the drink was made exclusively for the Wizarding World park and since it is such a commodity, the recipe is kept top secret, so trying to replicate it becomes a bit tricky. I did what anyone in my desperate situation would do. I searched online for recipes and picked three that looked the most reliable as well as being quite different from each other. What I should have done was research the original drink first. How did they come up with the formula? What were their stipulations for the drink? Was there anything NOT allowed in the drink. IF I had started this way, I might have avoided the pain of what happened next, but alas, hindsight is 20/20. I’m going to share with you our Butterbeer adventure and save the history for the end this time in hopes that you too can see just where we went wrong.

Armed with three recipes and a long list of ingredients, many of which I am happy to say you probably have in your home already, we marched boldly to the grocery store. The problem with grocery stores in any borough outside of Manhattan is that finding anything can be quite a challenge. Everything is everywhere and anyone who works at these stores seems to have a severe case of amnesia as they can’t remember where anything is, including things like, say, the dairy section. We spent a whopping hour in the store, looking for a few ingredients, most of which I thought would be a breeze to find, before finally grabbing our last item, cream soda, conveniently located on the bottom shelf, at the front of the store, behind another completely different kind of soda. We were off to a rough start, but we’d found everything we needed. 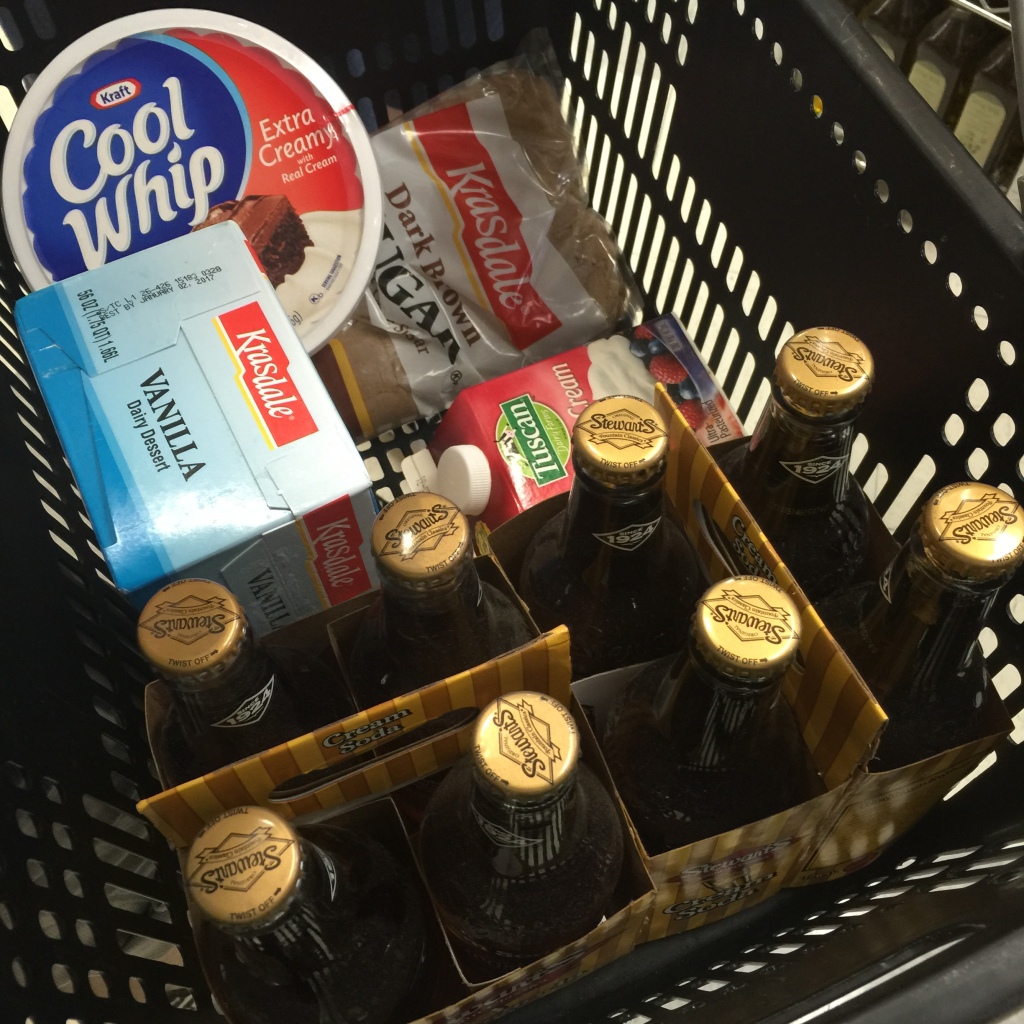 A basket full of hopes and dreams.

Upon our arrival home, we were pumped, ready for some cold deliciousness that we had missed ever so since our trip to the park back in July. We loaded the items onto the counter and got to work.

Found at: WizardingWorldPark.com
I’ve made a couple changes based on what we could find as well as what we ended up using. 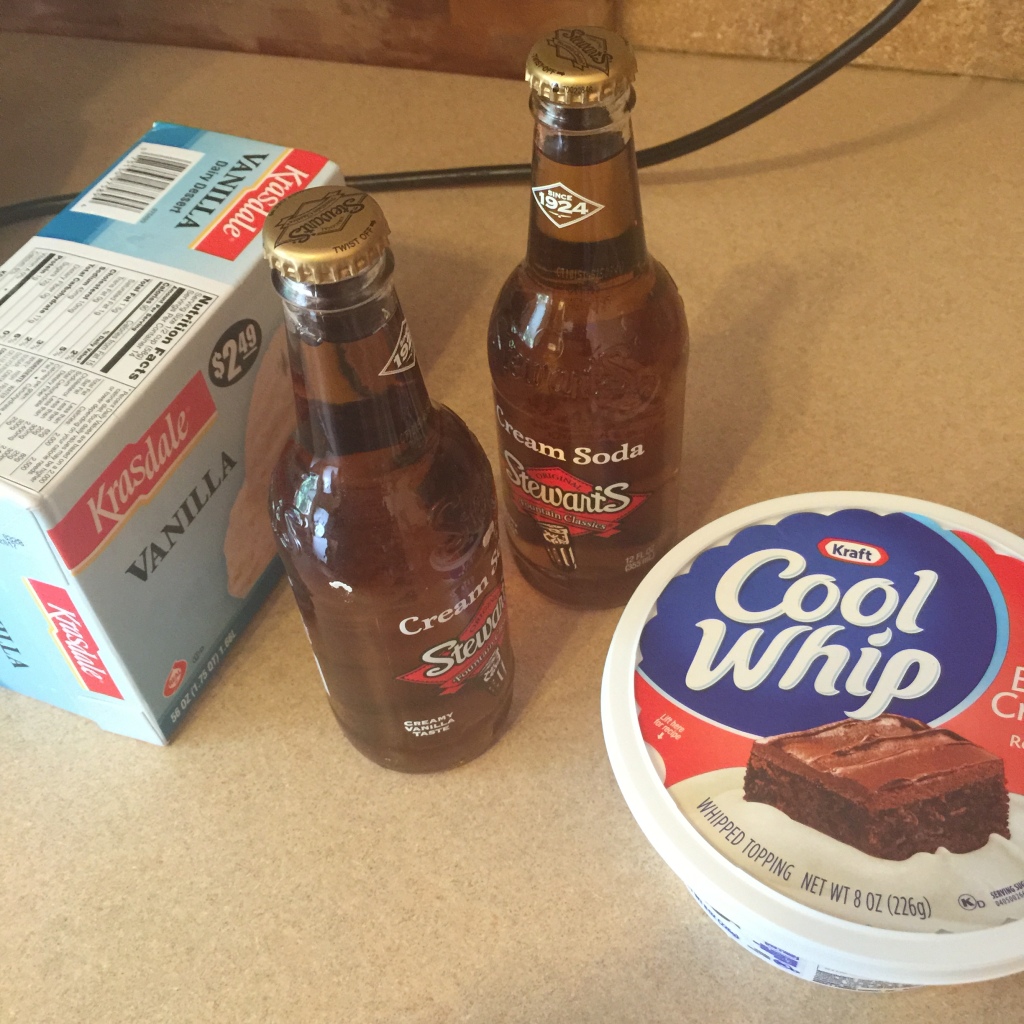 Directions:
1) Place 4 Butterbeer mugs or glasses in the freezer and chill for 20 minutes.
2) Mix ice cream and cream soda in a blender.
3) Divide amongst glasses
4) Top each glass with whipped cream and add butterscotch syrup on top if you’d like.

The easiness of this recipe is the real appeal here. Of all the one’s we made, it was fast and simple. It was also, sadly, probably the most different from that of the park. It does not have a clear brown look, instead it is creaming like the ice cream within. That’s not to say that it isn’t good though, because its delicious. I mean, it’s essentially a cream soda float and who doesn’t like the sound of that? 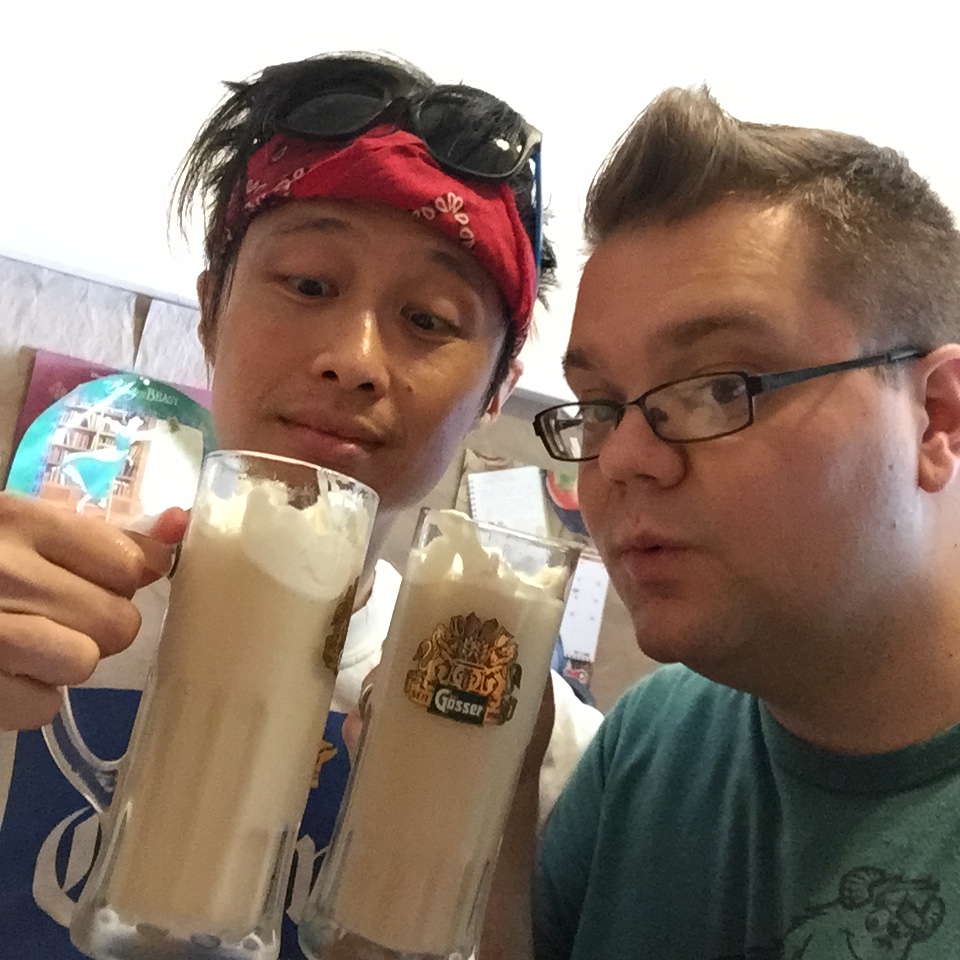 We were pretty excited to start this project.

Bottom Line: If you want to make a quick recipe of Butterbeer for some friends who don’t know the difference. This is the way to go.

By now we were feeling pretty great. After all, we’d just had a delicious dessert like beverage in the middle of a hot summer day. We were on top of the world. Sure we’d just put a lot of soda and ice cream into our bodies but things were looking up!

Ready for another round, we headed into our second recipe.

Recipe #2 – The Complicated One

Umm, this seems like significantly more stuff on our counter.

Directions:
1) In a small saucepan over medium, combine the brown sugar and water. Bring to a gentle boil and cook, stirring often, until the mixture reads 240ºF on a candy thermometer.
2) Stir in the butter, salt, vinegar and 1/4 of the heavy cream. Set aside to cool to room temperature.
3) Once the mixture has cooled, stir in the rum extract.
4) In a medium bowl, combine 2 tablespoons of the brown sugar mixture and the remaining 1/2 cup of heavy cream. Use an electric mixer to beat until just thickened, but not completely whipped, about 2 to 3 minutes.
5) To serve, divide the brown sugar mixture between 4 tall glasses (about 1/4 cup for each glass). Add 1/4 cup of cream soda to each glass, then stir to combine. Fill each glass nearly to the top with additional cream soda, then spoon the whipped topping over each.

First and foremost, this one is delicious. I mean, it better be as it has almost a whole stick of butter, a bunch of sugar and rum extract. As you pour the mixture into the cream soda, it creates its own frothy foam which looks amazing and tastes awesome. It still doesn’t quite have the look of the one at the park but the flavors here are more complex and we could definitely tell that we were getting closer to success. 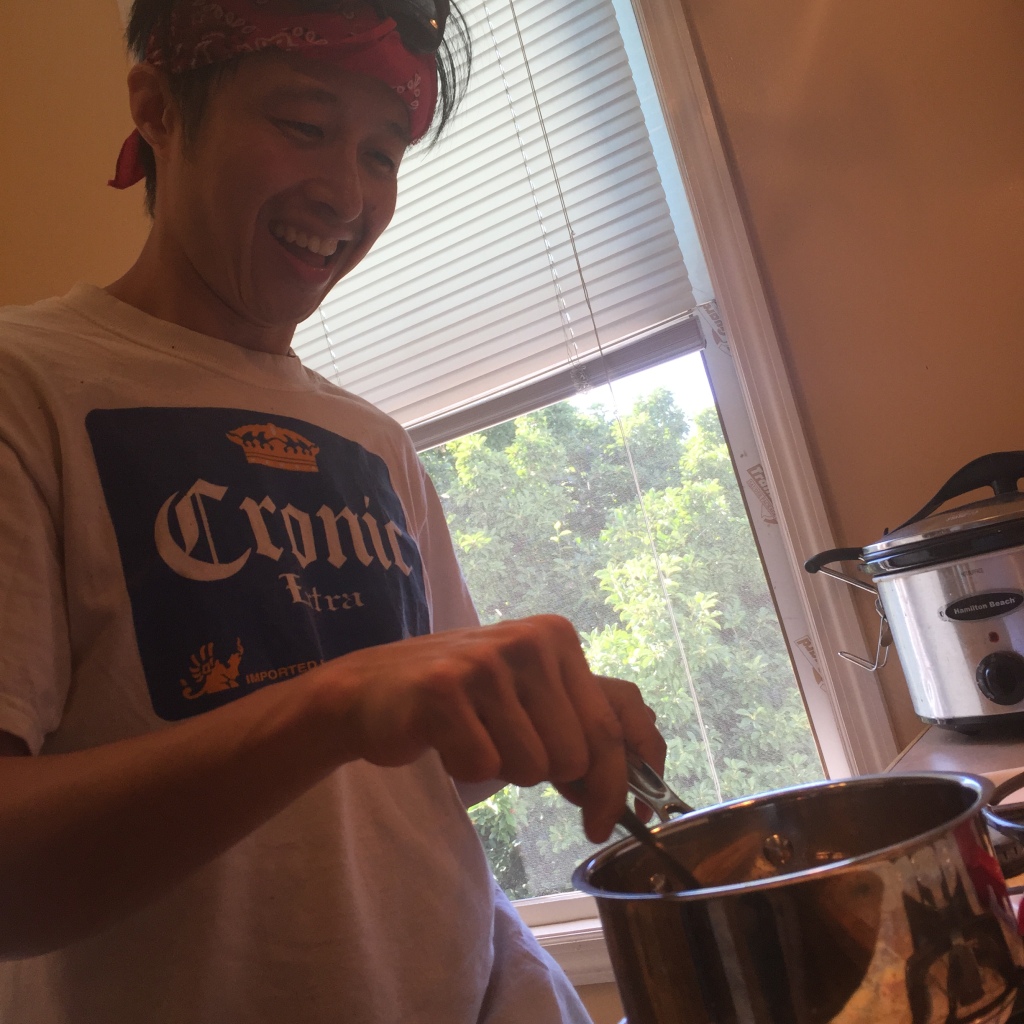 It was about this time that Carl mentioned his stomach was not feeling all that well but I reassured him that we only had one recipe left to go and that we were going to be fine. After all, who doesn’t feel a little rough after ingesting that much ice cream, heavy cream, sugar and butter. Feeling a little less awesome, we went for our third and final recipe.

Recipe #3 – The Weird One
Found at: Bakingdom.com

1) Set out six 16-ounce glasses. Place 1/2 teaspoon of imitation butter (or 1 teaspoon clarified butter) in each glass. Pour 12 ounces of cream soda into each glass, over the butter. Lightly stir, if necessary.

2) In a large bowl, or the bowl of a standing mixer, whip the heavy cream on medium high speed for 3-4 minutes until it starts to thicken. Add the sugar and continue whipping until very soft peaks begin to form, another 3-4 minutes (if you need to whip more or less, then be sure to do so; the times can vary quite a bit based on environment). Stir in the vanilla and imitation butter (or clarified butter), then whip for another 30 seconds or so, until soft peaks form.

3) Spoon a generous portion of foam on top of each glass of butterbeer, mixing gently, if desired (or spoon the foam into the bottom of the glass and pour the butterbeer over the top). Serve immediately.

Things started to go down hill with this one. We started out by throwing the cream into my vitamix, thinking that I could whip it up. Unfortunately, there wasn’t enough cream to be able to make this happen and our first attempt at whip cream was awful. With no hand mixer, I realized that I was going to have to hand whip this thing. I readied my arm muscles (Non-existant) and sucked in my stomach (Growling nervously) and prepared for the worst.

The thing about whipping cream is that it takes a while by hand and it also requires a lot of heavy arm movement and gets tiring very quickly. 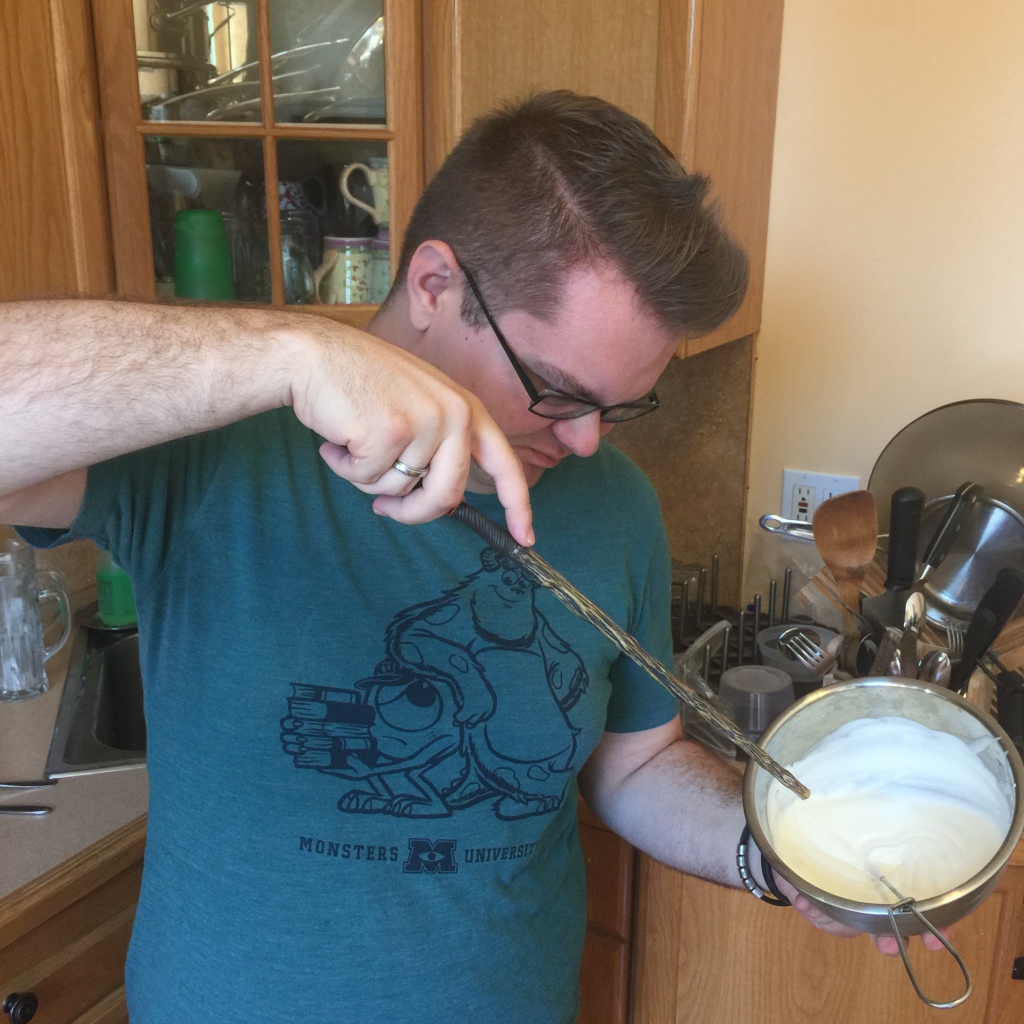 After a few minutes, we resorted to trying magic, which only made me more upset about the fact that this cream would not be whipping itself.

The misery was mounting.

At long last, I finished the cream and made the drinks.

Well it at least looks the closest.

The thing about this one is that imitation butter is a weird piece to the puzzle. I’d rather do real butter but then again, the imitation is much lighter, making this one the least heart burny of the lot. It’s also the one that looks the most like that of the park and in the end, we realized that it was our favorite of the three.

Unfortunately, this decision would come much later as we began to feel very sick. Carl spent nearly an hour in the bathroom as I took a long nap to literally sleep off the pain of Butterbeer. We were both in agony and regretting the decisions of the day.

Hours later, I sat down to do a little research on this drink, because as you know, I like to give you guys all the facts. Here’s a quick run down.

The recipe that the park has become famous for took nearly three years to come up with. Chef Steven Jayson, Vice President and Corporate Executive Chef for Universal Parks went to Scotland in July 2008 to meet with J.K Rowling herself in order to learn about the made-up brew. Rowling was impressed by Steven’s knowledge as he had gone through every Harry Potter book in order to find out what flavors made up the drink. Since the drink was going to be sold in the park, though, two rules would have to be followed. No alcohol, which was in the original book version, and no dairy.

No Dairy. NO DAIRY!!! As I read this, we were literally four hours in to some of most intense stomach aches of our lives, due to tons of dairy, and only now did we realize that we’d been doing it all wrong. GAHHHH! 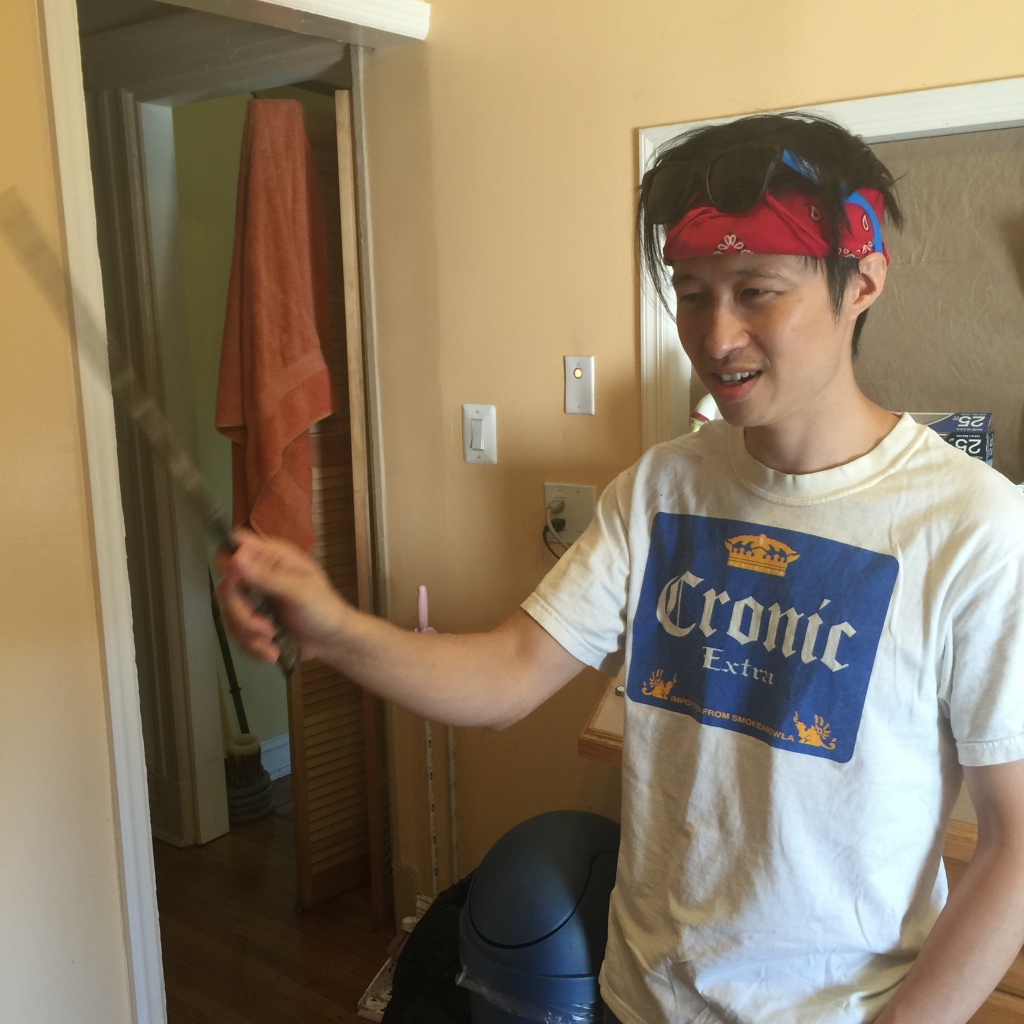 Carl tries to turn back time with magic to a day when we didn’t drink so much Butterbeer.

They experimented with over 15 different recipes to get just the perfect combination of flavors. Many folks have tried to take the beverage from the park, only to find that it congeals in on itself a couple hours after being served, which is perfect for Universal because that means that you really can only drink it there. The whole process ended with Rowling sampling the brew and happily agreeing that they’d nailed it.

How real Butterbeer is meant to look.

Butterbeer is now a staple of Wizarding World and is even counted as the number one item on the guest satisfaction survey. It’s totally wonderful and even if you don’t like Harry Potter, if you are in the park, I implore you to try it. If you are at home, try giving a recipe a go, just don’t do all of them at once. Trust me on this one, it’s in your best interest.

Do you have a favorite Butterbeer recipe? Let me know and we’ll try it! Next time, we’ll talk all about the wands of the Wizarding World. See you then!!