There is one thought that stuck with me throughout every single second of the fifth film on our Vault Re-watch, Bambi. That thought was simply: This film is gorgeous. The animation flows beautifully. The background of the forest is stunning and every cel-animated animal and critter bursts to life on the screen. The colors are dazzling and combined with the music, they convey a sense of beauty, wonder and, at times, terror. Bambi is a film that nearly everyone has seen and for good reason.

Bambi, based on the novel ‘Bambi, A Life in the Woods’ by Felix Salten, was originally planned to be the second feature length film from Walt Disney Productions. Something I’ve come to learn about Walt in my research is that he truly did not believe in rushing things. He’d have animators and writers work on something for a long period of time and when he realized that it wasn’t up to his standards, he had no problem making them table it until they could come at it with fresh eyes, sometimes years later.

Such is the case with Bambi. Walt was unhappy with the the way that the animation for the animals was turning out, especially the deer, so he tabled the project until a later date. The project also went slowly even when it was finally in full production as the company was bringing in several new animators due to the loss of many employees as a result of the Animator’s strike during the production of Dumbo. Despite all of this, Bambi eventually released in August of 1942.

Everyone comes out to see the new Prince.

In order to finally get the animals to move the way they wanted, Walt actually established a small zoo/rescue facility where animals could be brought and cared for.  Through this, the animators were able to study their movements in order to get everything just right.  The animation of the deer especially stands out as a landmark of the time.

The deer move very organically, especially in this sequence where we meet Bambi’s love for the first time.

The film was met with several hurtles upon its release. Once again, the film lost money at the box office due to not having the European market. It did not, however lose as much as its predecessors and fully made back its profits during a re-release after the war.

My favorite bit of history from this film is the controversy involving the fact that hunters felt offended by the film. The editor of Outdoor Life, a popular magazine of the time, denounced the film, calling it, “…the worst insult ever offered in any form to the American Sportsman.” To him I say, ‘you’re one to talk. You killed Bambi’s mom.’ We’ll get to that later. Many people also felt let down by the fact that there is really no fantasy in the film. There is no magic but what we see every day in mother nature. It is a simple coming of age story about a whitetail deer and his friends and despite its initial critical response, and its ability to hurt hunters’ feelings, Bambi is known today as a classic.

Have you seen my dead mom?

Bambi is ultimately a story that Disney has told a dozen times by now. It is the story of life, death and rebirth. We start off with a scene that strongly resembles a film we’ll watch many weeks from now, The Lion King. All the critters of the land awaken to a bright new day and find out that the new prince has been born. They all hurry, children and mothers alike, to see Bambi, a new born white tail dear. He is timid and afraid, thanks in huge part to the leacherous old owl of the forest using his scary eyes and hooting at the boy. Go home owl, no one invited you.

From here, we see Bambi start to learn and grow. Disney really excels here at allowing us to see the world as if we are seeing it for the first time, and as far as the deep forest where all the animals live, this really is our first time. Bambi is greatly intrigued by all the small animals and their movements and he is easily distracted by one to the next. This of course, leads us to meet Bambi’s brother in arms, Thumper. 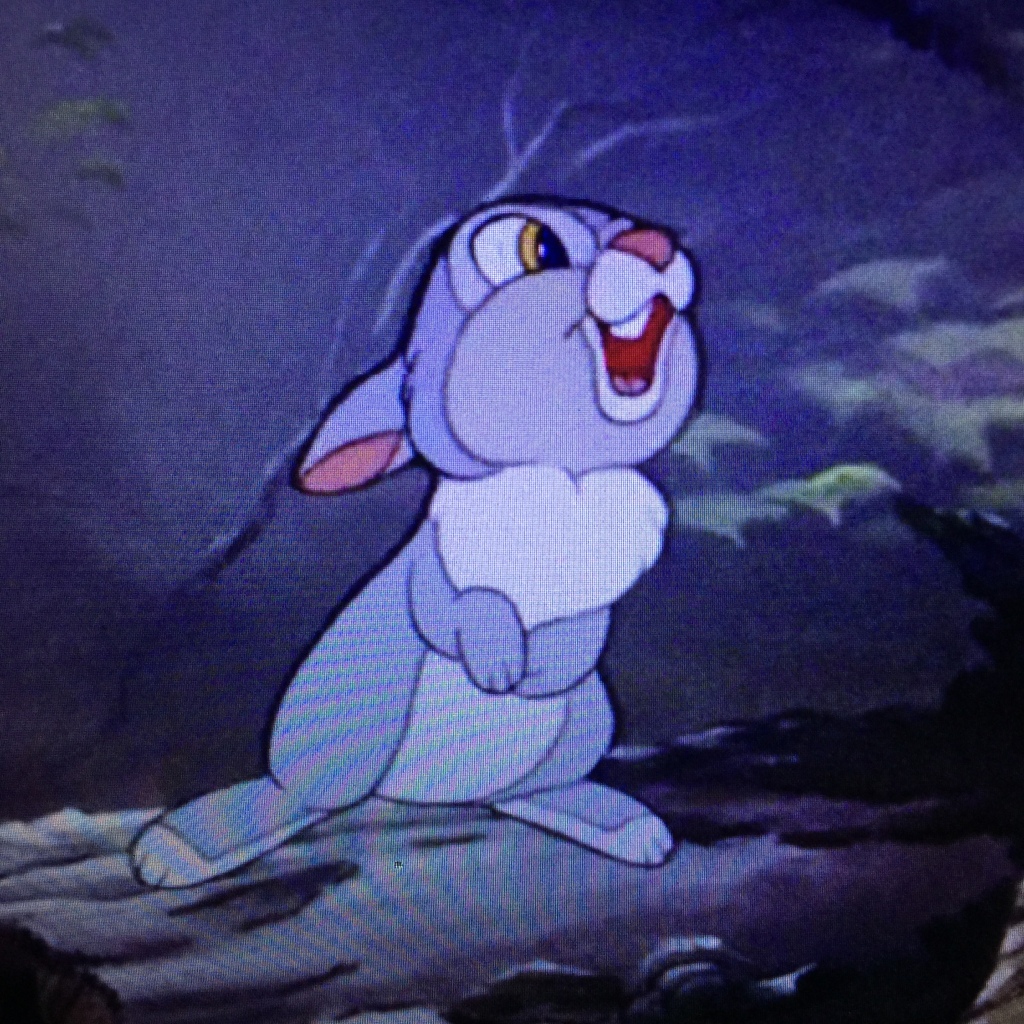 Thumper’s single tooth makes him one of the cutest things in this film and it is a steep contest.

Thumper is an outrageously cute bunny rabbit who really acts as Bambi’s guide in the world. His mother may be teaching him important things like ‘stay out of the meadow’ or ‘winter is when it snows’ but Thumper has the real life lessons. He teaches Bambi to speak and also explains that flowers taste better than greens. In one of the most charming scenes of the film, he even teaches Bambi to ice skate, though I’d use the word ‘teach’ loosely as Bambi mostly just lays on his stomach for this scene.

I don’t think Bambi is taking this lesson well.

The third member of our party is a skunk who Bambi refers to as Flower and the name sticks. As a child, I remember really loving Flower. I thought he was super cute and I liked him so much I even recall my mother calling me ‘Flower.’ I’ll have to uncover more on this and report back but I can honestly say that Flower was the first Disney character that I really clung to. In fact, when starting up Bambi, the scene I remembered the best was not Bambi’s mother’s fate or any of the music. It was the moment when Flower meets a cute girl skunk and goes completely red and rigid and falls over. I’m not sure why this stuck out but it is easily my most vivid memory of the film.

Flower is never actually referred to as a skunk and later in the film he even refers to other skunks as “Flowers”.

The trio eventually hits winter and we see the long difficult season where the animals forage for food. Eventually, Bambi and Mom head out to the meadow in search of food and this is where his mother meets her fate which has gone down in history as one of the most heartbreaking moments in all of Disney. At one point, her death was actually going to be animated, but I think that the weight of this moment is felt enough that not seeing it is justified. I also think that seeing her die would simply be a bit too much for anyone to handle.

Bambi grows up without his mother, a theme which I am starting to notice is very common in Disney films, and is taught by his father, the Great Prince of the forest. I find it interesting that there is no King of the forest. Just an observation. 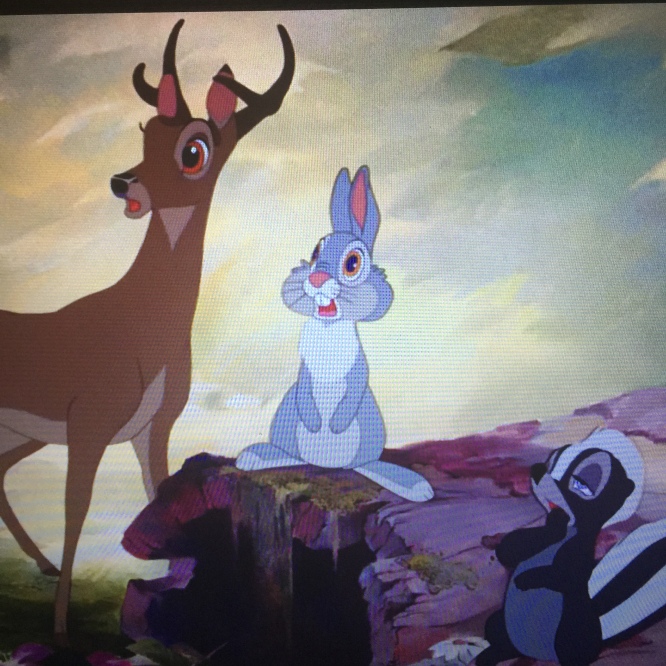 Everyone gets a little less cute as they grow up and…Flower! Pay attention!

Of course, now that they are grown, we see the three heroes become ‘twitterpated,’ by some extremely aggressive females of the species. I actually really like the fact that the women of the film are the one’s who are courting the boys. It seems very progressive especially when compared with the frail, helplessness of Snow White. Bambi falls in love with the girl who licked him obnoxiously as a child, Faline and soon they are shacked up together. 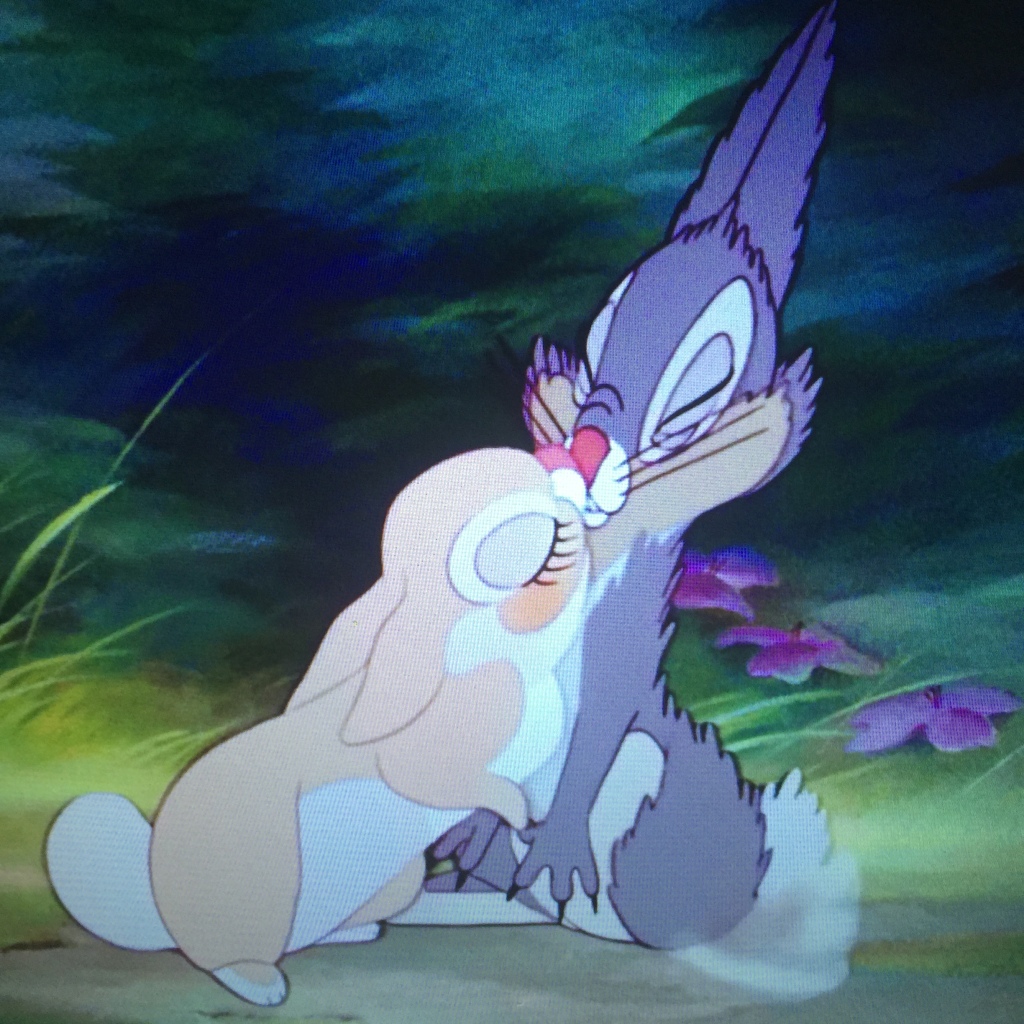 Thumper learns the subtle act of romance and twitterpation.

Man, the villain of the film shows up once more, apparently back for more deer moms. They set a fire and come out guns blazing with dogs to hunt. We actually see several animals taken down here and this really solidifies them as a menace to the forrest. Since the decision was made to not show man (Which I’m thankful for as Walt originally wanted us to watch them burn in the fire) we see their aggressiveness in their hunting dogs which attack Bambi and Faline. 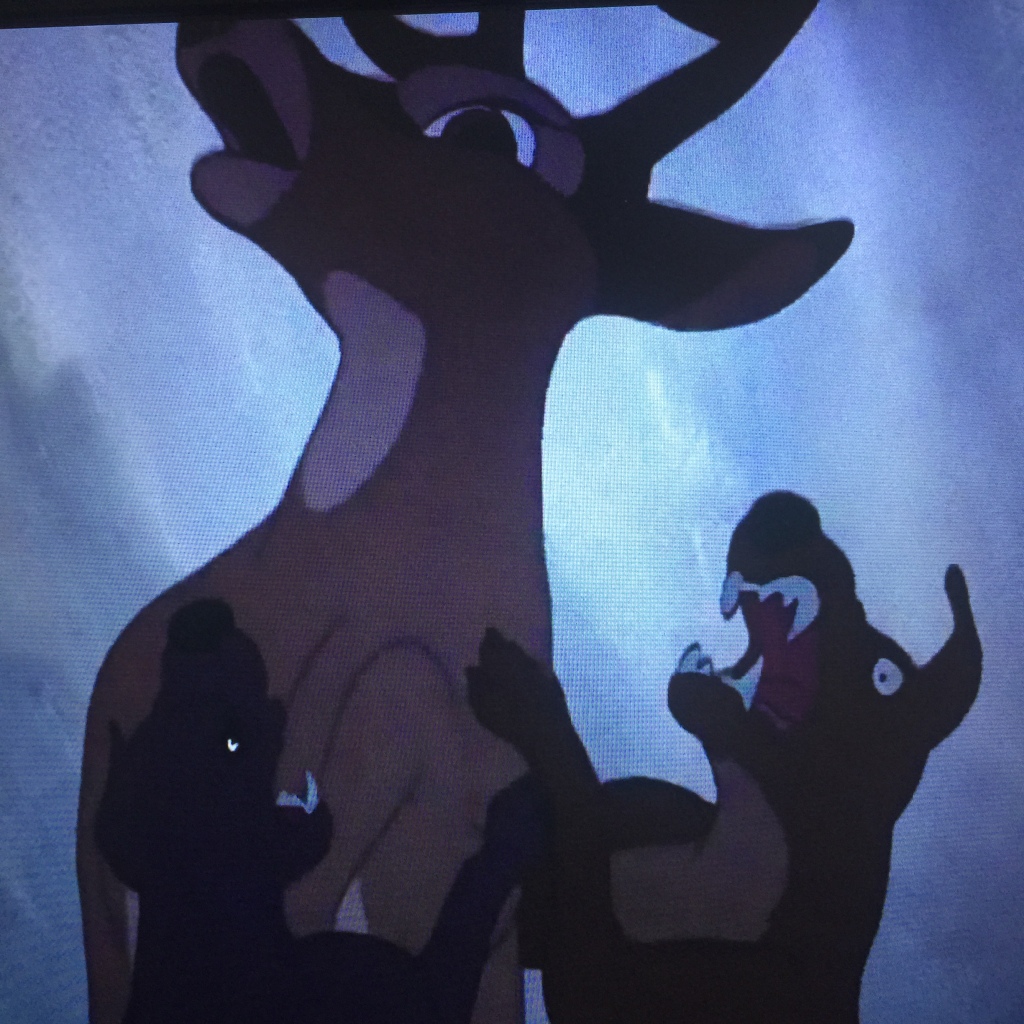 Bambi fights back and almost escapes when he too is shot. His father, who has been absent most of the film, shows up to yell at him until he gets up and then leads him out of the forest. While the burning forest is truly horrific, once the fire dies, we see that life returns and green starts to grow over the fallen trees and the world is reborn around the animals.

One of the most beautiful yet haunting scenes of the film.

We come full circle and Bambi and Faline have two children of their own. Bambi learns the true strength of being an absent father and we see him high up on the cliffs, watching over his mate and children, taking his place as the Great Prince of the Forest. 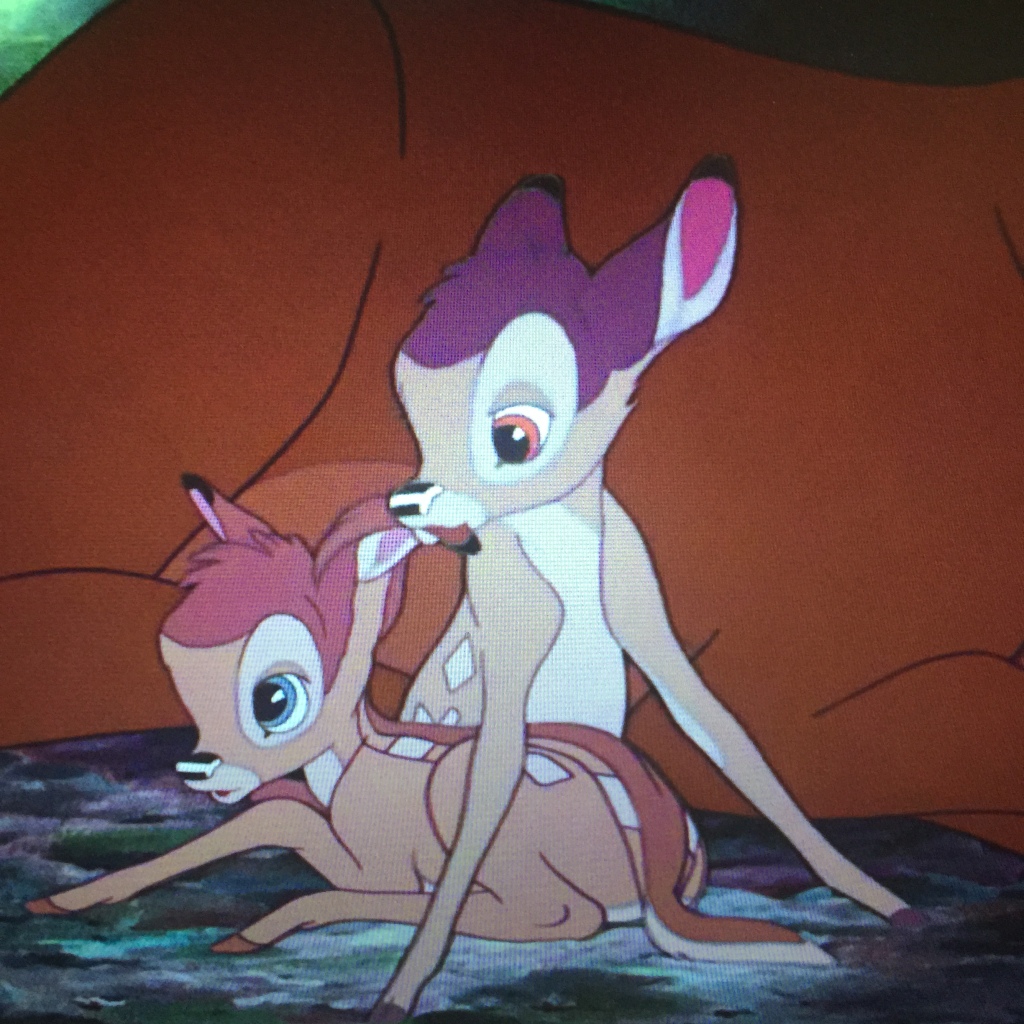 Two babies are cuter than one.

Literally every scene of this film has something I want to talk about. I love the great color schemes of the more dramatic scenes like the fire or the battle Bambi has with another male for Faline’s courtship. The animation of these scenes is dark and sinister and really sets them apart.

A truly gripping fight for manhood.

The animation of every animal in the film is superb and they all feel like individuals. There are no background critters here. Creators of the film have said that they often got sidetracked while creating the story. They’d want to have scenes about anthills and then about bugs and about the leaves and they wanted to go deeper into the squirrels and chipmunks, but they often had to remind themselves that this was Bambi’s story and he should always be the focus. This inability to stay on track though really speaks volumes to the liveliness of this world. Everything feels so real that you simply want to know more.

Bambi is the darkest Disney film yet, and the last full length before we go into the string of package films, which became popular during the war. It still stands as one of Disney’s greatest achievements and as one of their cruelest films. It’s legacy is known throughout the world and there isn’t an ounce of magic to be had. It’s the simple story of a deer, his friends and their life in the woods and it proves that even something simple can still be wonderful and perfect.

Bambi rejoices being the man of the forest.

Does watching Bambi make you twitterpated? Wait…don’t answer that.

But seriously, what do you guys think of Bambi? Favorite or not? Do you cry when his Mom dies or do you stay strong? Let me know in the comments.