If the only story anyone knew about Walt Disney was of what he went through in order to get Snow White and the Seven Dwarfs produced, I think it would still be enough to land him in the ‘inspirational’ category. The film started production in 1934 and was to be the very first full length cel animated feature in the history of motion pictures. As you can imagine, people thought this was crazy. Disney had been doing short films about Pigs getting their houses blown down and a little mouse named Mickey. These were successful in their own right, but as with anything that has never been done, the people around Walt were more terrified than they were supportive of his monumental new endeavor.

His brother and business partner, Roy Disney, tried to convince him not to do it, as did his wife Lillian. People in Hollywood saw it as a sign that Disney was on it’s way out, calling it “Disney’s folly,” which in those days was probably pretty rude. The film itself cost just shy of $1.5 million to make, and at the time, this was astronomical for a film, let alone one that was a cartoon. Walt poured much of his own money into the project, eventually mortgaging his home to meet Snow’s budgetary needs, so you can only imagine the smug look on his face when it was a ginormous success. “Take that haters,” he’d have said if he were Taylor Swift.

Sitting down to watch the first film on our vault list, I thought to myself, “What happens in this movie?” Ask yourself that now. You probably can envision Snow singing to some animals and I’m sure the first thing that hits you is a little tune of “Hi-ho, h-ho, it’s off to work we go,” but outside of that I couldn’t recall a lot. In my head, the film seemed short, maybe in the 30 minute range, so when I saw the running time, I was eager to see what happened during the hour that my memory was apparently missing.

The first thing that strikes you as the film fires up is that the animation is still drop dead gorgeous to this day. Everything, from Snow to the dwarves to the Queen’s cape and even the animals, has such a fluidity to it. Everything flows and never feels choppy and often Snow’s expressions seem taken right out of real life as if motion captured. It is truly impressive.

Snow is a pretty likable protagonist, albeit the sort of ditsy girl which feminists of today would have probably hung Walt Disney for. She runs in terror at the first sign of danger and cooks and cleans as a means of getting the dwarves to let her stay with them. Yet, her kindness shines through and makes her endearing to this day. 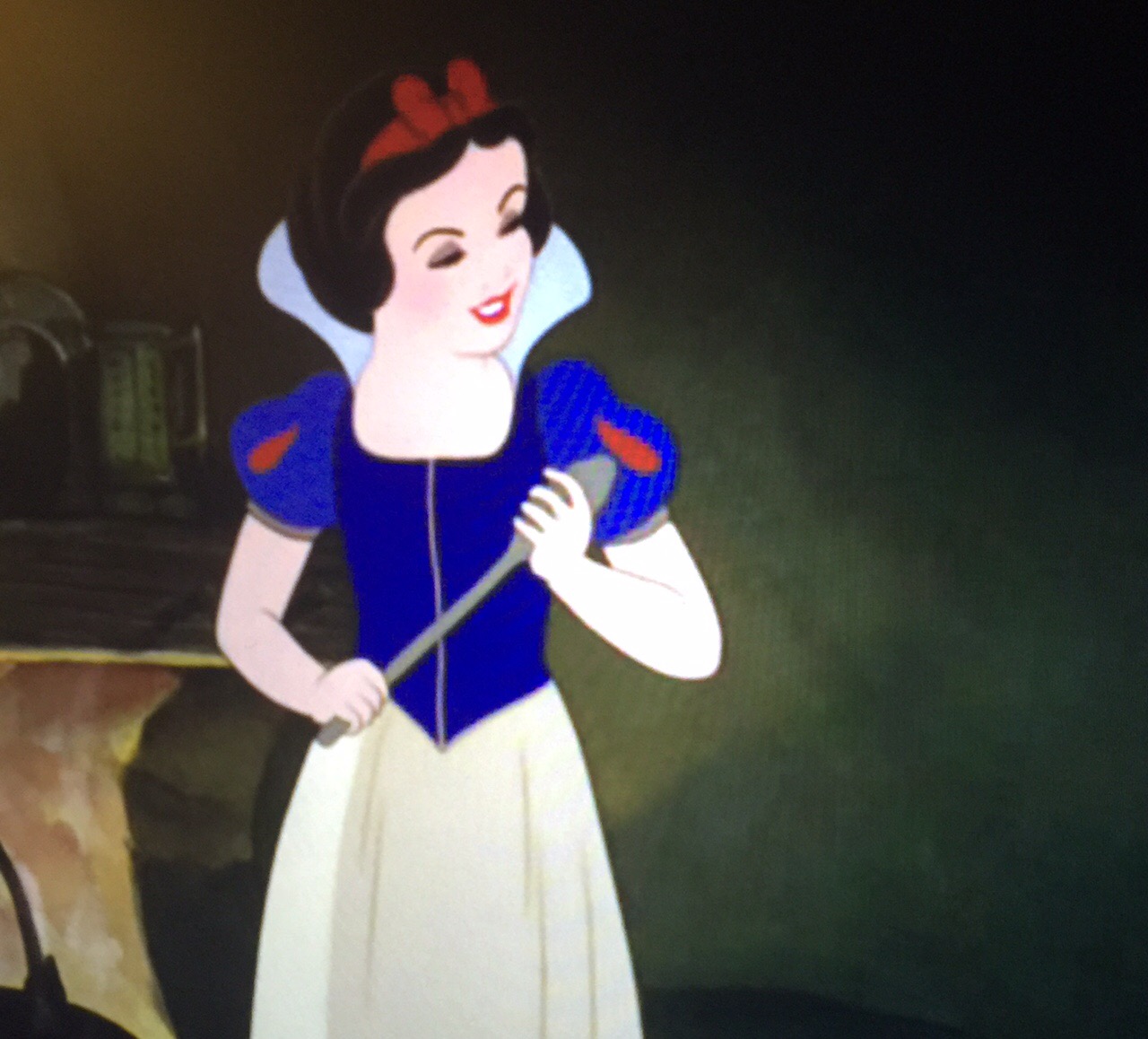 A scene which I’m sure almost everyone has forgotten, but which stands out like a sore thumb in today’s politically charged surroundings is one in which Snow is kneeled beside her bed, praying for her Prince to come find her (And for Grumpy to like her). It’s interesting to see Snow White, a princess, as this extremely vulnerable little Christian girl. Not to say that I don’t like the use of religion, it’s just not something you see in many cartoons these days.

The real stars of the movie though, are the dwarves. Hot off the tail of ‘The Three Little Pigs’, a short film which brought Disney a large amount of success, Walt wanted the Dwarves to look very similar but act very different. It was a new concept in animation to be able to differentiate similar characters by their actions as opposed to their costumes. The dwarves are hilarious to this day. Dopey in particular holds up his charm nearly a hundred years later, which is ironic as he was one of the last dwarves to become a staple of the seven. 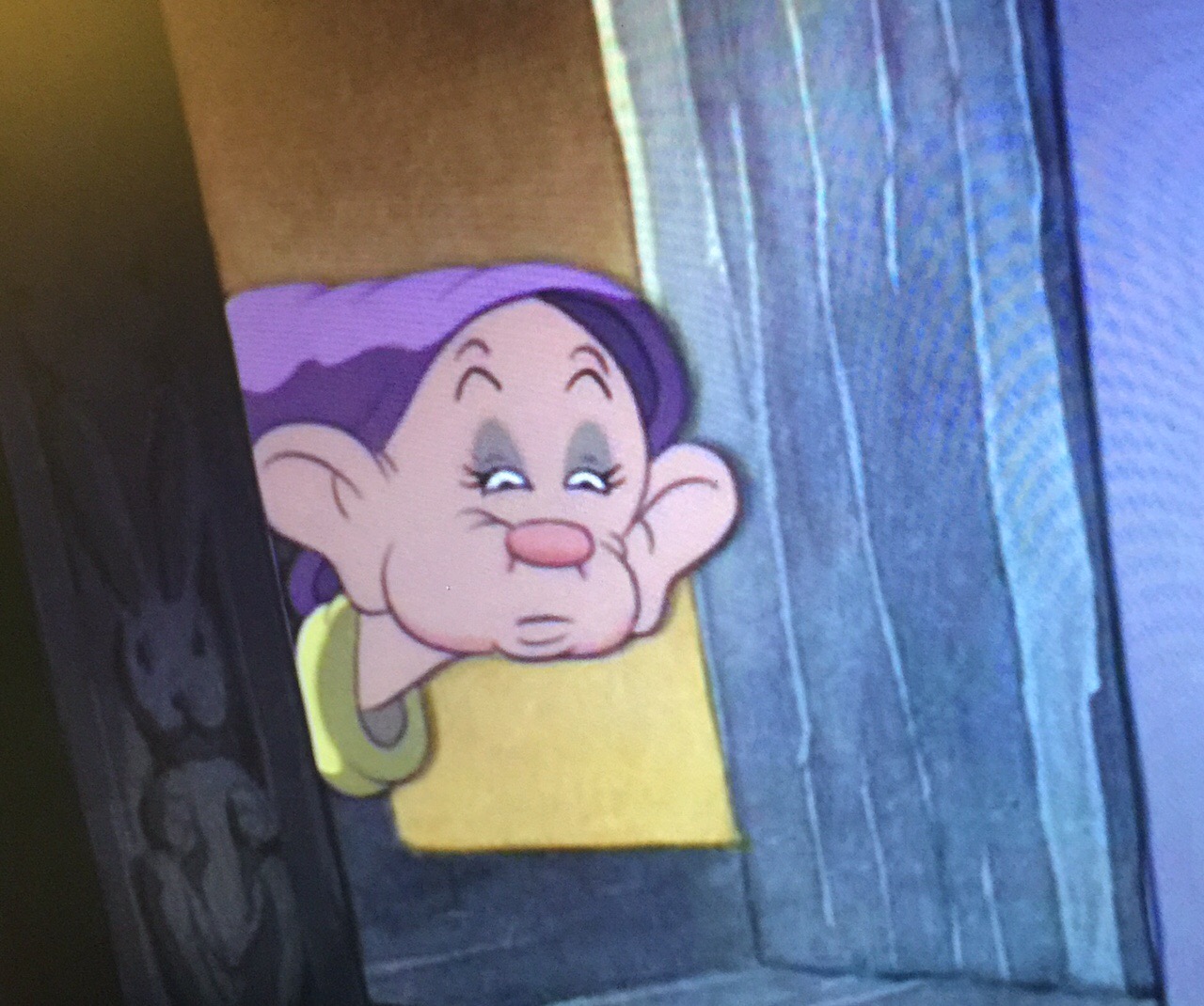 He waits for Snow to kiss him goodbye and then runs through the window and back to the door just to get one more kiss. He swallows a soap bar and hiccups bubbles. He simply beams with cuteness. The other dwarves, too, are adorable and their sequences of trying to figure who has broken into their house as well as the moment they all go out to wash up for dinner, really stand out and I can just imagine kids laughing their heads off at the sight of them. Doc, the leader of the group is one of the few dyslexic characters I can think of in animation as he often mixes up his words, and Sneezy often sends pots and pans flying every time he sneezes.

At one time, Disney wanted the movie to be predominantly about Snow and the Dwarves, with much less of the Queen and the Prince. It’s amazing to think that there were even more sequences planned for these quirky dwarves, but I think the parts they kept were well worth it. The dwarves often act as a morality tale for young children, teaching lessons such as washing before you eat and being kind to others and they never really run their course of silliness.

Lets talk about the Queen. I often hear people comment on how Disney likes to ‘kiddy’ up more adult fairy tales but the Queen here shows no sign of that. At one point, she is literally holding a pig heart in a box and talking to her mirror. She is evil and crazy and there is no way we are going to see her redeemed. Her clothes are absolutely fabulous and she constantly commands our attention. There was a time in the production of the film where she was going to be a larger, more comical character but Walt felt that this would make her harder to believe.

Her sequence of creating a potion to make her old is one of the most melodramatic, drawn out sequences I’ve ever watched, but I love her for it. Disney villains today could learn from her showmanship. She even dies in a pretty horrific way. Lightning strikes the rock she is on, still transformed into an old hag mind you, and she plummets to her death. Disney likes to drop people to their deaths apparently. And if that’s not bad enough, a couple of vultures descend on her within seconds of her death. Yikes!

If there is one warning I can give to any of you who are reading this and thinking that you want to join us on our vault adventure, it is this: Snow White and the Seven Dwarves is a LONG movie. The sequences last forever and often times we found ourself wondering how much longer the characters could dance before getting tired. It was a different time and the pace of films was much slower. Watching the cut betweens of the dwarves frantically running to save Snow, while the Queen convinces her to take a bite of the apple will feel like the kind of build we’d expect from a low rate soap opera and by the time the Queen takes her final fall, you will be happy that at least she can’t monologue anymore.

The moment the Prince finally comes to find Snow happens surprisingly fast and if you don’t watch closely, you might actually miss that magical wake up kiss. Between the Queen dying and the end of the movie, you’ll see less than eight minutes of actual story.

Snow White isn’t going to win any Woman of the Year awards as she is not anything I would ask young young women to aspire to be, BUT the film is gorgeous and stylish and marks a turning point for animation and film as we know it and for that, it is worth the r-ewatch.

So what do you guys think of Snow White? Tell me everything!

Check out the rest of the blog as well! I thought a lot about making this a separate blog but I like the idea of keeping everything together for now. What do you guys think?

QUESTION OF THE WEEK: Who is your favorite Dwarf and why?