It has been said that the first step to recovery is admitting that you have a problem, so here it is.  I am addicted to one thing and one thing only: Peanut M&M’s.

My relationship with food has never been that of an over eater.  I take more of a villain-in-Ratatouille approach.  I want to eat good food.  I want to eat food that inspires and delights me.  I don’t want to eat just to get full.  I want to feel satisfied after a meal but not like I am going to explode if I eat another bite.  Yet for some reason, I find that all of this goes out the door when faced with a bag of Peanut M&M’s.

It always starts with just one.  It won’t hurt to eat just one. 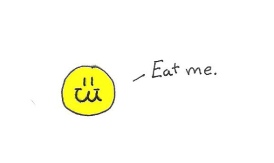 And before you know it I am shoving the little candies into my mouth as if I have been lost in the desert for months and now, having finally found civilization, I am getting to eat real food for the first time.

But it’s not real food.  It’s artificial coloring mixed with processed chocolate with a peanut at the center.

And it’s not enough to eat just a couple.  I go for the Medium bag and I can eat it all without even thinking about it.  I eat until I am full and then I eat more.  I eat until I feel as though I am getting sick, but that doesn’t stop me.  I eat until my stomach churns and my breath becomes short and my heart starts to race, and yet only when the bag runs empty do I stop for air.

Looking back, I have always had that one food that no amount of it could quench my thirst.  When I was younger, it started with baby carrots.  Healthy? Yes.  But I ate them in such quantity that my skin began to discolor at the over pigmentation of orange.  My stomach also took a beating from the large consumption of fiber.  Seeing as I was very young and a child that poops often and in large quantities is not what any parent wants, my mother had to find a solution.  Her answer?  Goldfish crackers.

I’m guessing the transition was easy given the fact that both were orange and I’m sure I was taken in by their adorable little smiles and salty, cheddary goodness.  The problem was that my obsession only grew stronger.  In the way that Sith Lords are made stronger by hate, my addiction was made stronger by the unhealthiness of the snack presented to me.  Every time we would go to the supermarket I would plead for a bag of the happy little cheese fish.  I remember one Christmas, my Mom bought me the large family sized carton of the crackers.  She did this as a joke, thinking my little eyes would go wide at the sight of so many of them.

I saw it not as a joke, but as a challenge.  The adults left me alone so they could finish serving pie and ice cream and by the time they returned to me I was collapsed in a mess with cracker crumbs all around me and the carton discarded next to me, empty.

Once again, my mother knew it was time for a change.

Next up was the white cheddar popcorn from Smartfoods.  This snack had the added bonus of leaving a disturbing amount of white cheddar powder on my hands after eating it so that now, if I ate a full bag, there was a residue leaving proof and along with that came shame.  I had to give it to my mother on this one.  Sadly, when it comes to foods that I am addicted to, I feel NO shame.  I would eat a whole bag and then walk around touching everything in sight so that there was a cocaine like trail of white cheddar leading through the house on everything from the walls to the floor to our cat, Milo.

It was sometime after getting my first job that the popcorn finally ran its course.  Being the addict that I was, I had started to hide a bag of popcorn behind the counter and eat it when customers left the store but the powder made it very apparent that something was up if someone walked in while I was mid snack.  One day, the bag fell and spilled powder everywhere and if you think red wine is hard to get out of carpets, then you have not experienced the hell that is cleaning up white cheddar popcorn.

It was shortly after this that I discovered Peanut M&M’s.

I saw an ad on TV in which they tried to get people to stop smoking by showing them a picture of their lungs after smoking for several years.  This gave me a great idea.  I would look at the nutritional facts on the bag as a way of “Scaring myself straight.”  Below are my findings.

Has my addiction been ended by these discoveries and research into my past?  Sadly, no.  I still look in longingly as I pass a store that I know sells the little pebbles of joy (I have them all mapped out.)  I still eat a full bag, swearing I’ll save some for later and never do.  But maybe with the admission of my problem and the help of those around me, I can one day move past Peanut M&M’s and hope that my next addiction will be something healthy. 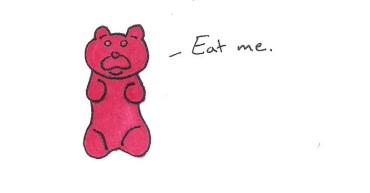