Hello all and welcome back to another edition of ‘Mad Hatter makes us all feel uncomfortable’…no wait.  That’s not what this is.  Today’s article is actually all about Cheshire Cat and Pompous Caterpillar.  Seriously, this guy makes me double check that I don’t have something on my face every time he looks at me with those judgy eyes.  Stop judging me Caterpillar!  Who do you think you are? My grandma??  Okay, but seriously, today we will run through everything leading up to the moment that “Welcome Alice” flashes across the screen.  Let’s get started! Cheshire Cat is a gem character, which means you can use your hard earned gems or your hard earned cash.  As a side note, I’ve decided the next update should include a function to let me sell Mickey bars out of a black market stall behind the castle for gems.  I can display them in the creepiest of trench coats and overcharge for them.  You know, just like regular Mickey bars… The promo is your best bet for Cheshire cat as it comes alone with the Alice In Wonderland ride, which looks like an adorable little sand castle. You’ll instantly get a quest for Cheshire Cat, but I say skip it for now. It’s not necessary for the event and you can always do it later.  Also, it involves him losing his head, and that’s creepy. Also, here is a photo of the attraction for anyone with sizing concerns. Welcoming Caterpillar isn’t quite is hard as you might thing.  Sure, the drops are a bit harder to get and are rare, but if you’ve been saving up cups, you should have him in no time.

These are quite easy as most quests are two hours long and there are plenty of quests to get them. These are a fair bit harder as only three characters can currently get them.  Make sure to keep these three on the case until you have them all. 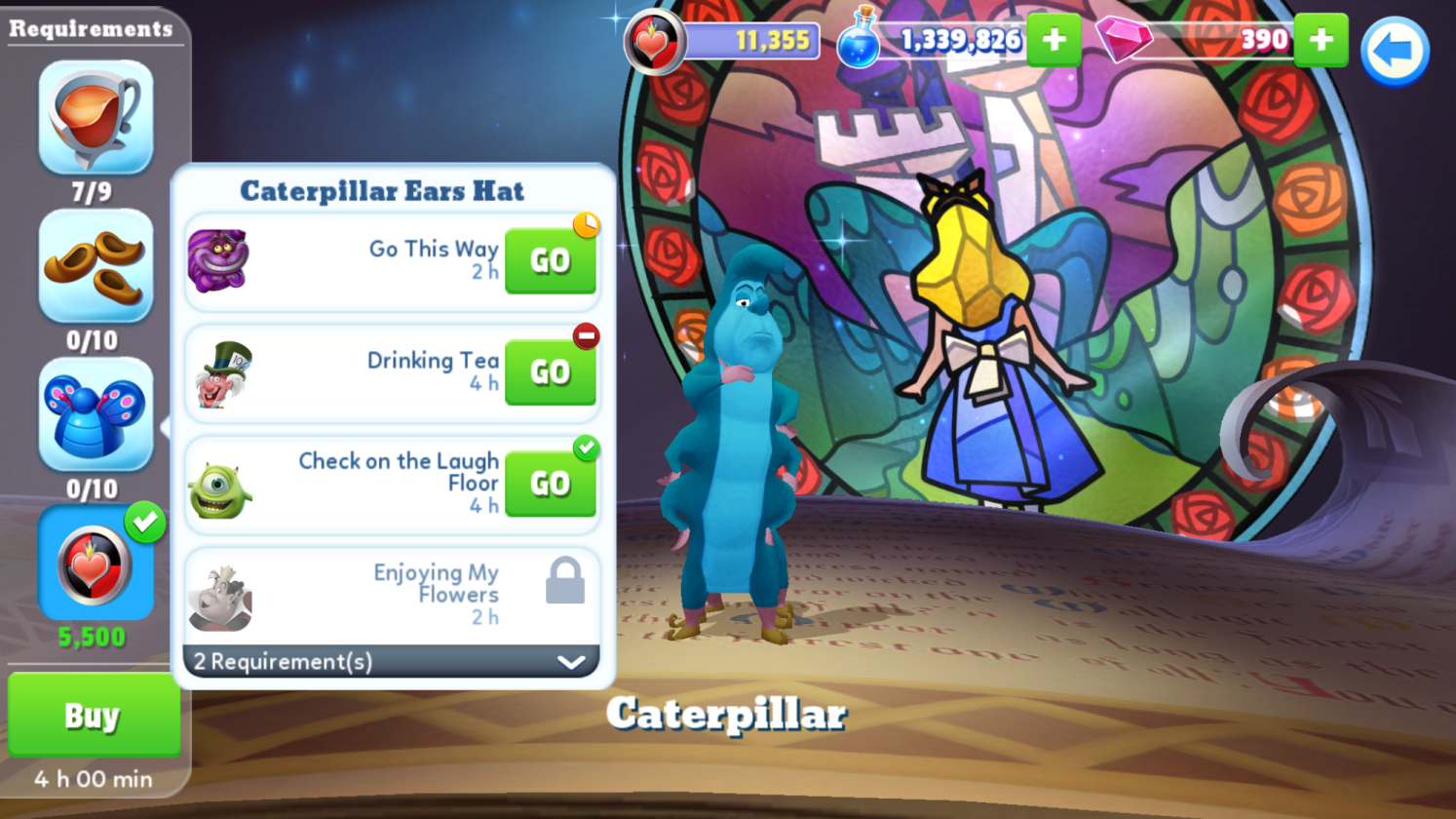 Before long, Captain Judgement will be all yours. In the meantime, Mickey is off having an existential crisis as he realizes that he’s trapped within the Kingdom, a prisoner of his own making! He’ll get a very short quest to the fun wheel, because nothing cures the foreboding feeling of no escape like a fun wheel. Caterpillar will be haughtily acting like he’s better than everyone.  It’s not about how many hands you have buddy!

As for why he should concern himself with Hatter and Hare, well someone has got to clean up all of Hatter’s spit!  Isn’t that why we welcomed you in the first place?? Caterpillar will get sent off on a 1 hour quest to look for a noise.  Spoiler:  That’s the sound of the nerve in my brain breaking because Hatter’s tongue waggling was too much for me to handle.  Mystery solved. AHHH!  There it is again! Hatter will, thankfully, be sent away for 8 hours to think about all the bad things he did.  Good riddance. After all that pondering, he realizes that he did in fact see a caterpillar.  I can see where he’s confused.  It’s not the only thing in the Kingdom that’s long and slimy with a mind of its own.  PLEASE CLOSE YOUR MOUTH!!! The Hatter will go to chase down the Caterpillar while I chase down an Advil. The Caterpillar is content during all of this to talk nonsense about mushrooms.  Umm, I know I’ve been playing a lot of Mario Odyssey, but even I think there are too many mushroom related games in my life right now. While Tweedle Dee and Tweedle Dum won’t be joining our kingdom, we can rest easy knowing we get their attraction. The attraction will take six hours to build and is quite small, so it should fit easily into the kingdom. The Hare has decided to follow the Hatter.  I have no idea why.  I’ve decided to run as far away as possible. 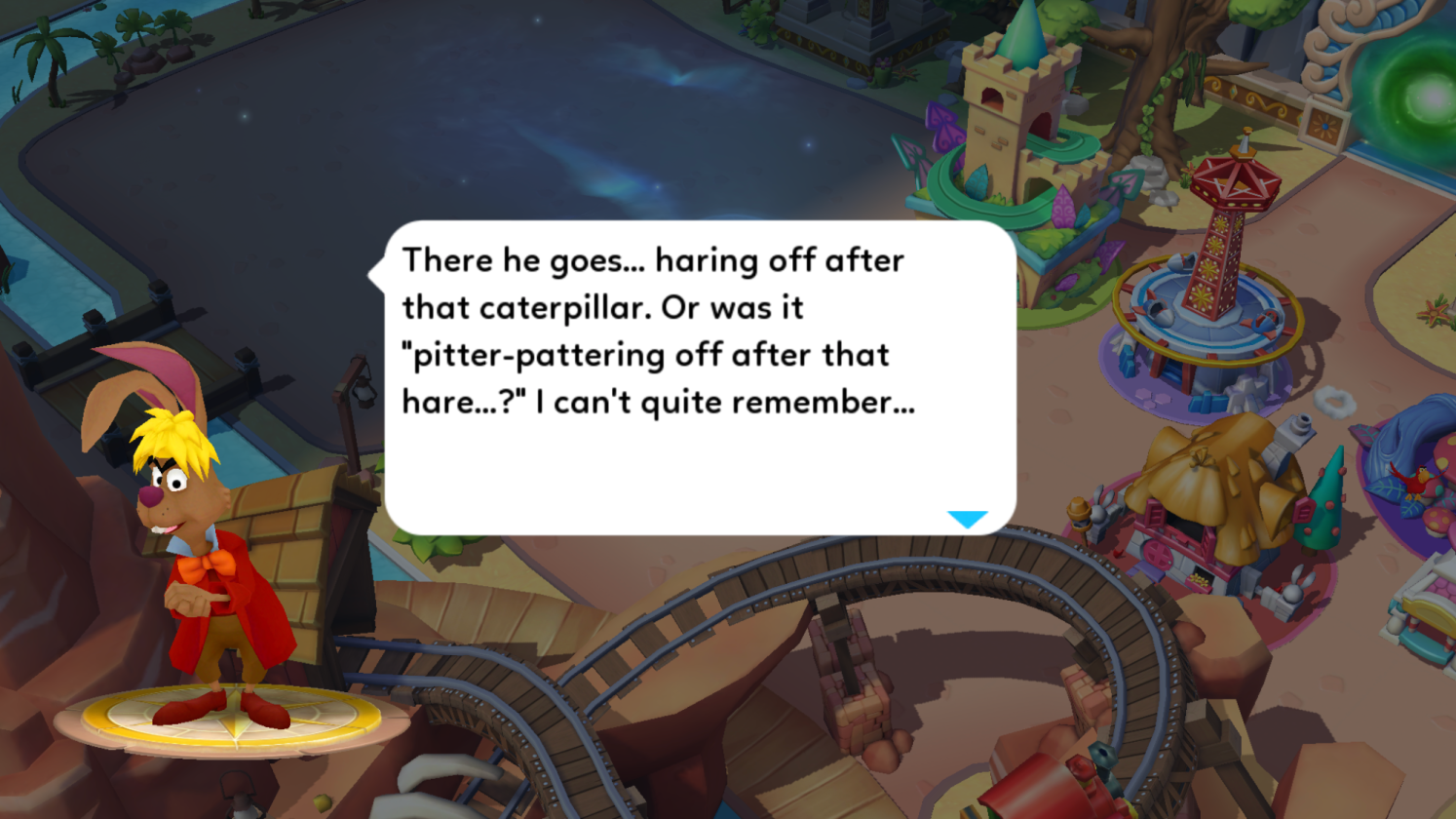 The March Hare will be sent off to the Golden Afternoon but you should know that he must be at level 4 to accept this quest. The Caterpillar has finally caught on to the fact that this entire event is actually about when tea time actually is. I quite prefer Mad Hatter looking down so that I don’t have to see his face.  Please stay like this forever and eternity.  Kay thanks. Caterpillar and Hatter will get a dual quest to go to the fairway but keep in mind that Caterpillar will need to be level 2 to take this one on. You’ll also get the Spelling B quest for Caterpillar once he’s level 2.  This can be skipped for now as it is not part of the event. The Quest to Welcome Alice

At long last, you’ll be all caught up for the event and Merlin will inform you that the guest of honor is on her way! From now until she is released, the best thing to do is to save up on teacups so that you have as many as possible for Alice and The Queen of Hearts!  How are you guys doing so far?  Are you all on track to finish the event?  Are you terrified of the Mad Hatter’s tongue?  Has the Caterpillar informed you that those shoes don’t go with that dress.  He told me that so I thought I’d ask.  I think it’s statements like that which make people on Facebook refer to me as a “She” so often.  Oh well, onwards and upwards!