Too Many Bones – Board Game Review

Upon entering the Gen Con floor on Thursday morning, we eagerly speed walked to the booths with the games we wanted the most.  One of these was a big box game known as Too Many Bones.  At the time, I knew absolutely nothing about this game.  Just that it was considered awesome and that several folks were already raved about it.  It was, in many way, a blind buy.  In fact, even while standing in line, I asked questions of those around me to make sure that I actually wanted the game since it carries a hefty price tag.  But it’s well worth the price of entry.  Too Many Bones is a game so fantastic that writing this review is exciting simply because I’ve been dying to talk about it.  Sporting top quality components, amazing gameplay, and memorable stories and characters, this week’s board game review won’t be about if you should play Too Many Bones, it will be about why you NEED to play it.  Better yet, why you NEED to own it!

In Too Many Bones, you take on the role of one of the Gearlocs – a gnome-like race which lives for the thrill of adventure.  Playing solo or with a group of friends, you’ll head out into the wilds to fight baddies, claim loot and eventually defeat the evil tyrant who is terrorizing the land.  Too Many Bones is a self-proclaimed Dice-Building RPG.  This means that as you play, you’ll be using Training Points, this game’s version of Experience Points, to upgrade your basic skills, but also to buy new skills in the form of dice.  These dice are then fit into your player mat, where they can be accessed during battle for various effects. 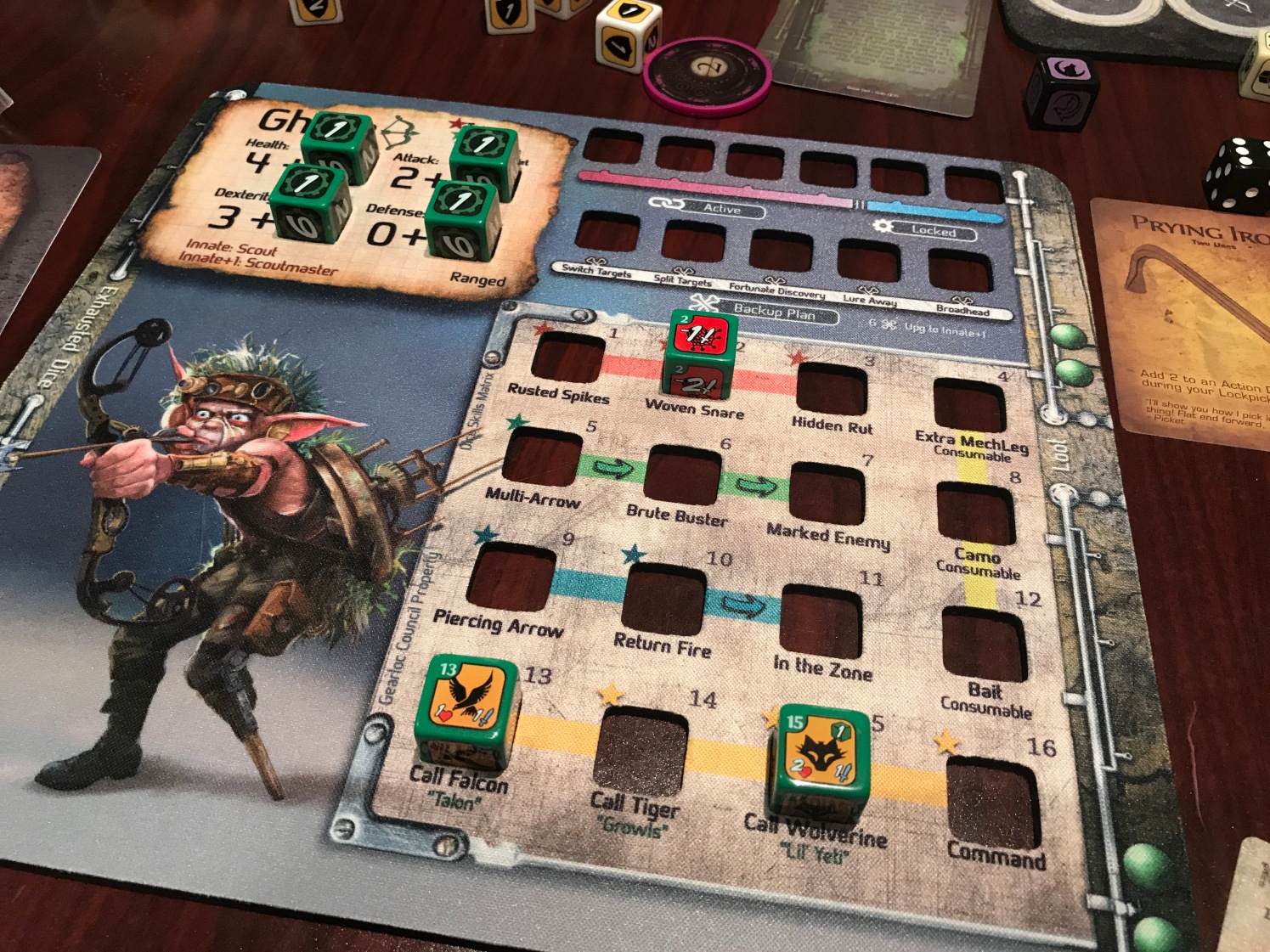 On any given day in Too Many Bones, you’ll head out on an encounter, a card which will give you the story of the day and then offer you one or more choices as to how you face the encounter.  Do you run and hide, or face the monster head on?  Do you sneak past or pay for help in sneaking past.  Do you fight a big monster, or several smaller monsters.  All of these choices allow you to customize how you play, but also give various rewards.  Perhaps fighting that bigger monster has an enticing trove loot for completion, but be warned, the bigger the baddie, the harder the battle.  Often times, a choice will lead to no battle at all, but more often than not, you’ll be jumping headfirst into conflict with a whole pile of baddies, and this is where the game becomes a strategic masterpiece. 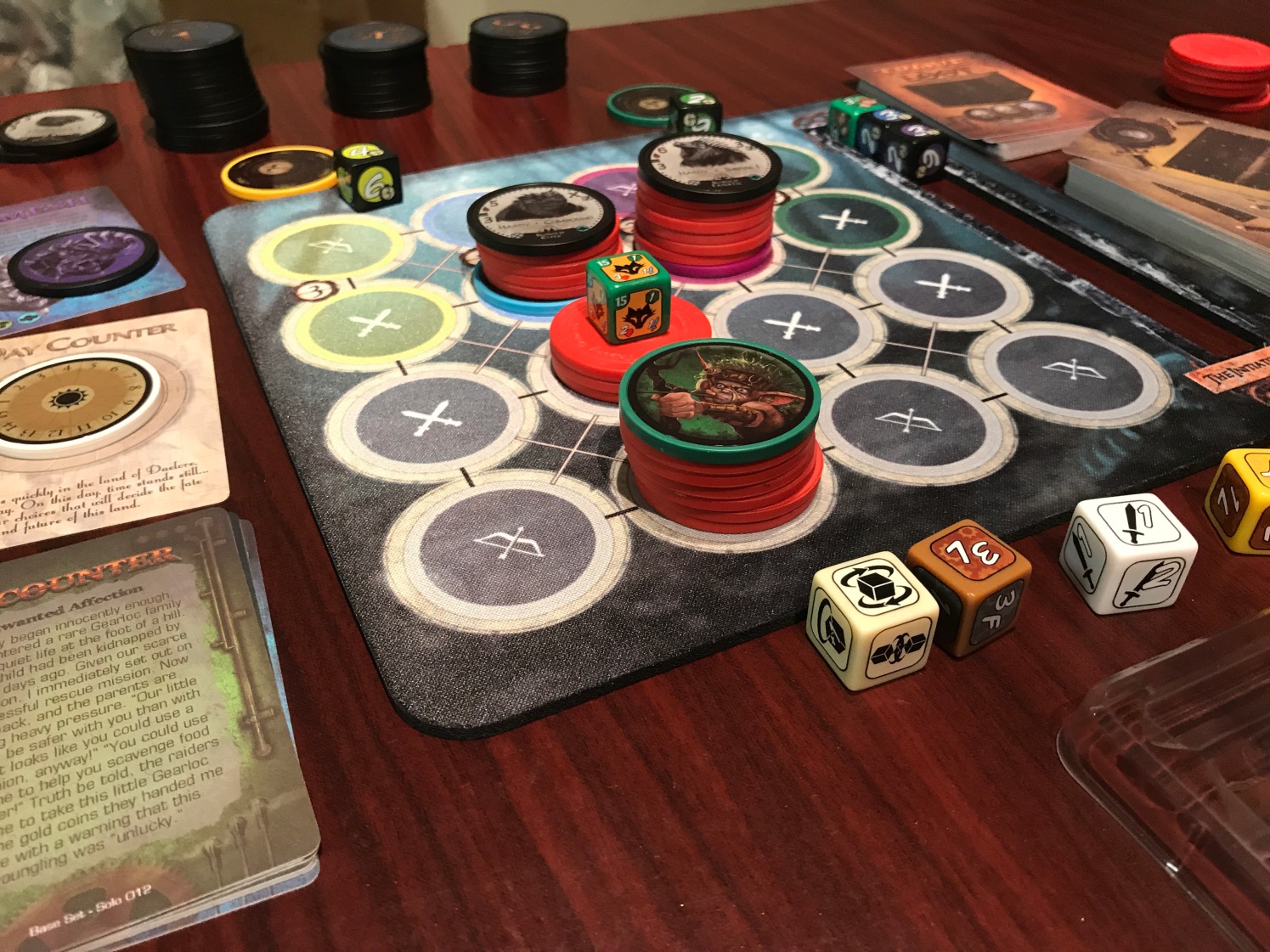 Let’s go back to that player mat though, because in order to really understand the gloriousness that is the battle system, you have to understand the gloriousness of the player mat.  As you attain new skills in the form of dice, new options will become available to you in battle.  But here’s the thing.  The really important thing.  Every Gearloc plays SO DIFFERENTLY.  Where one might summon beasts to aid him and traps to catch baddies, another might need to find materials to craft bombs in order to deal massive damage.  Another still, uses rage to steadily increase damage as they fight.  This all sounds fairly standard, but sitting down to play one of these characters isn’t standard at all.  It’s a big boisterous buffet of options just waiting for you to feast on, but you’ve only got so much room in your stomach.  I say all of this to try and convey the fact that the most fun part of this game often isn’t even the playing part, it’s the in depth analysis and understanding of each character.  Each time we play, the first 30 minutes is usually spent pouring over the character sheet and the player mat, breaking down each character’s beautifully intricate system in order to try and find the best combination of dice in order to build the most survivable and powerful character we can.  And all of this wonderfulness – all of these options and choices – happen BEFORE a battle even starts!

At first glance, battle will seem over simple.  After all, you’re moving poker chip stacks around on a 4×4 grid in order to fight baddies and try to survive.  But fighting in this game is when you get to put your machine of dice and stats and skills to use.  You’ll be rolling dice and using skills to try and attack baddies, but they themselves are quite formidable and each, even the weakest, present a challenge which feels very much like a puzzle.  One baddie breaks your weapons should you attack it outright.  Others lashback, damaging you whenever you damage them.  You’ll quickly learn the best, and worst, ways to handle each baddie, and just when you think you’ve got it down, a new baddie will throw you a curve ball you were in no way prepared for.  Keep in mind too that each die you roll has difference skills on different sides.  And while they all have a similar theme, your roll will decide what skill you’re actually using and then it’s up to you in implement it into your strategy. 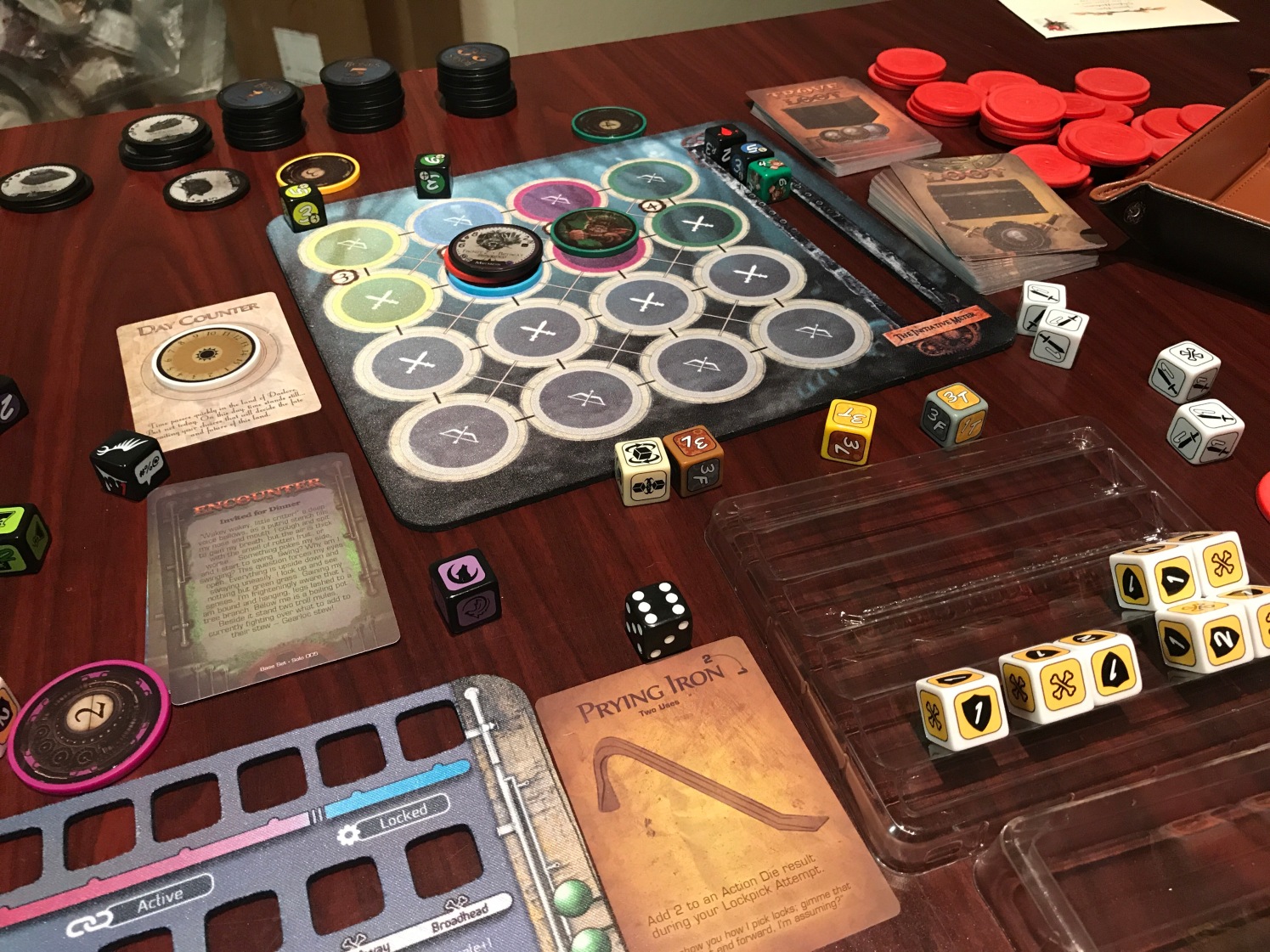 Battle in Too Many Bones is a hard grueling thing.  It’s filled with choices and excitement when your roll is amazing and devastation when your roll goes amiss.  Thanks to a system called the “Back-Up Plan” you can actually build up your “Misses” or failures as you might call them, in order to unleash other powerful abilities.  In this way, no turn, even the worst rolled of them, feels wasted.  And sure, you WILL lose several battles.  But when you win, it feels so amazing because you really earned it and the rewards that come with the victory.

What Makes Too Many Bones So Good?

I’m tempted to just write the word “Everything” under this header, but I’ll be a good sport and point out some details.  I’ve already mentioned that building out your character and creating a machine of dice which (hopefully) make you a baddie killing machine is a huge bulk of the fun.  Figuring out how each dice synergizes with the others on your mat is so rewarding.  Much like finally learning that awesome combo in a fighting game, Too Many Bones has so many “Ah-ha!” moments as you figure out what works, and also what doesn’t.  I’ve also mentioned that battle is a beautiful masterpiece of moving parts, strategic cooperation with your friends, and incredible complexity.

Beyond that, I would rob this game of something if I didn’t mention the components.  Oh my goodness are they beautiful.  The cards are sleek.  The player mats fit the dice perfectly.  The encounters and the poker chips feel new and different and the customized dice look great.  There’s all sorts of bits and bobs on the table to play with at all times and setting up the game really feels like setting up this massive play thing where every aspect is something you want to read and touch and gawk at.

Deeper still is the detail work put into the encounters and the stories that this game brings to life.  The fact that there is a separate stack of encounters for solo play or group play.  The fact that each encounter presents interesting compelling choices.  The fact that there’s a whole mini-game involving lock picking!  I guess what I’m trying to say is that every centimeter of this game feels lovingly crafted and it oozes with creativity, interesting design and fabulous story-telling.  It’s a game that feels like the designers Adam and Josh loved every single minute of making it.

What Could Make Too Many Bones Even Better?

Usually I offer some small criticisms here about production value or rules.  Now the rulebook is a beast of a thing, and you’ll spend plenty of time with it on your first playthrough, but the designers state outright that the rules are a living document and FAQs and rules updates can be found on their website.  Other than that, I’m going to cheat on this one a little.  What would make Too Many Bones better for me is simply to have more of it.  I want more characters.  I want more baddies.  I want more tyrants.  I want to play it more!  I have never ONCE played a board game solo, even though many games have the option.  I’ve always felt like it was a waste to not play a board game with others around.  But my insatiable need to play Too Many Bones compelled me to play a solo game.  Like a good book or a great video game, I don’t want to put it down.  Even now as I write this, I’m itching like an addict to get back to it.  All I want is more!

I’ll be totally honest.  This is a game that will probably never see the table when any of our more casual gamer friends are around.  It’d be like handing the controller in Dark Souls over to a player who usually sticks to Candy Crush.  This game is daunting and meticulous.  It requires study and reading and understanding to really play each Gearloc correctly.  But for the player willing to dive in and let this game absorb their very being, it’s a game that is full of rewards and experiences that are unlike anything else.  Too Many Bones is an example of gaming excellence.  It’s an instant classic that drips style from every component, every piece of flavor text and every minute of play.  If RPG-style play or tactical battle are even the slightest bit interesting to you, it’s time to go get Too Many Bones.  It’s a high point for board gaming, and an adventure that should not be missed.

Categories: Board games, Board Games - Now It's Your Turn

Tagged as: Board games, dice, game, gamenight, play, reviews, rpg, Too Many Bones