We’ve know each other a while now, so I think we ought to be honest with one another.  Don’t you agree?  We’ve all known that Beauty and the Beast was coming to DMK.  After an accidental button click sent an icon with Belle’s face to Google Play much too early, the cat was out of the bag.  I didn’t report on that story though because I like things to be nice and official.  Well, today we got a string of images on DMK’s instagram that I think makes this announcement pretty darn official.  Take a look for yourself.

Not long after that point, we also got an update on the Facebook Header Image for Disney Magic Kingdoms, as rose petals fall from above, signalling that a timer has begun on a curse and a tale as old as time.

That’s right!  We can now pretty much confirm that Beauty and the Beast will be the next set of characters to grace us with their presence.  As always, I like to take a stab at what might be in store for us.  We’ll start with the characters we might see, listing from most probable to least, and then talk about some Attractions as well as costumes that might be heading our way.  So now, I invite you to relax, let us pull up a chair, as the dining room proudly presents, your dinner…er…I mean…predictions for the next update!  WOOO!

There is no doubt in anyone’s mind that Belle will be part of the lineup.  After all, she is the star!  Not to mention her face was on the icon that was accidentally released.  She’ll probably be the first character we recruit as the whole story pretty much hinges on her saving her father, getting Stockholm syndrome, and falling in love with a hairy man with attitude problems.

The Beast also has to be a staple, though I could see him being the last character we recruit before fighting the big baddie at the end.  One interesting thing to consider is that most of the characters that come to us are actually being recruited in a world where the story of their films have ended.  This brings up the point that Beast will, as is typical for Disney, still be a big hairy monster.  It begs the question as to how all of this will fit into the DMK storyline and at what point in the film these characters will be joining us. 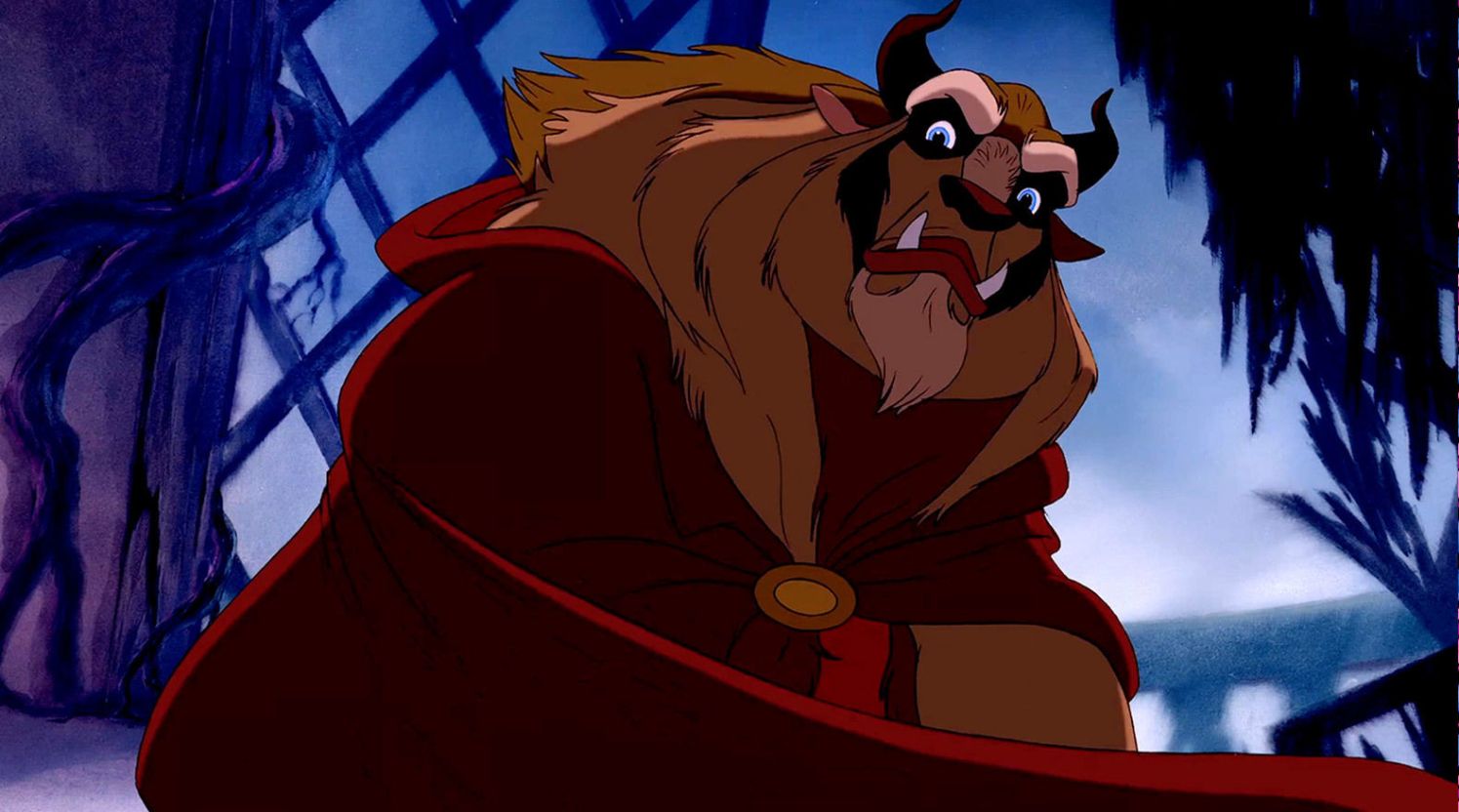 Definitely the villain of this update, Gaston needs no introduction.  No one spits like him.  No one fights like him.  No other character can claim to be roughly the size of a barge.  What Gaston really makes me wonder is if the replacement of the air balloon this time around will be the Beast’s Castle and if the fight will happen there.  Again, Gaston dies at the end of the film, so we’d have to be welcoming these characters sometime within the timeframe of Beauty and the Beast, pre-curse breaking.

If Maurice IS one of the characters, I think he’d be the second one we welcome.  You know, that second character who is never someone we really want, but we welcome them anyway just to progress the storyline.  Perhaps he’ll invent a way to recruit Donald easier.  I think we’d all appreciate that. 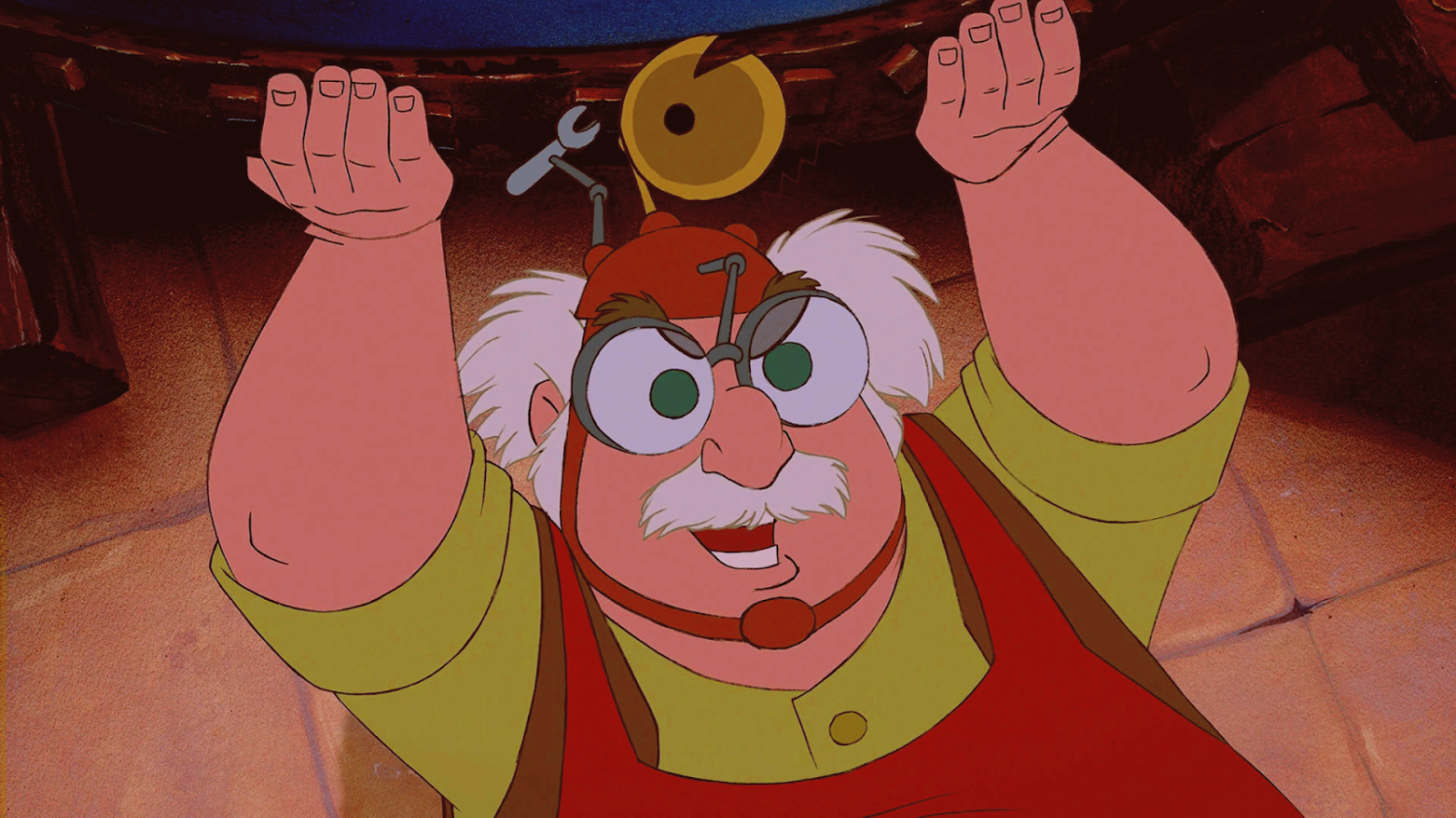 I think this could EASILY be an event, BUT I tend to think it’s not since there are just SO MANY great characters to welcome here.  If Lumiere is not in there, I would die of shock.  In fact, I think Lumiere makes for a good gem character as he’s one of the characters that everyone would want, but doesn’t necessarily need to be there for the main story to move along. 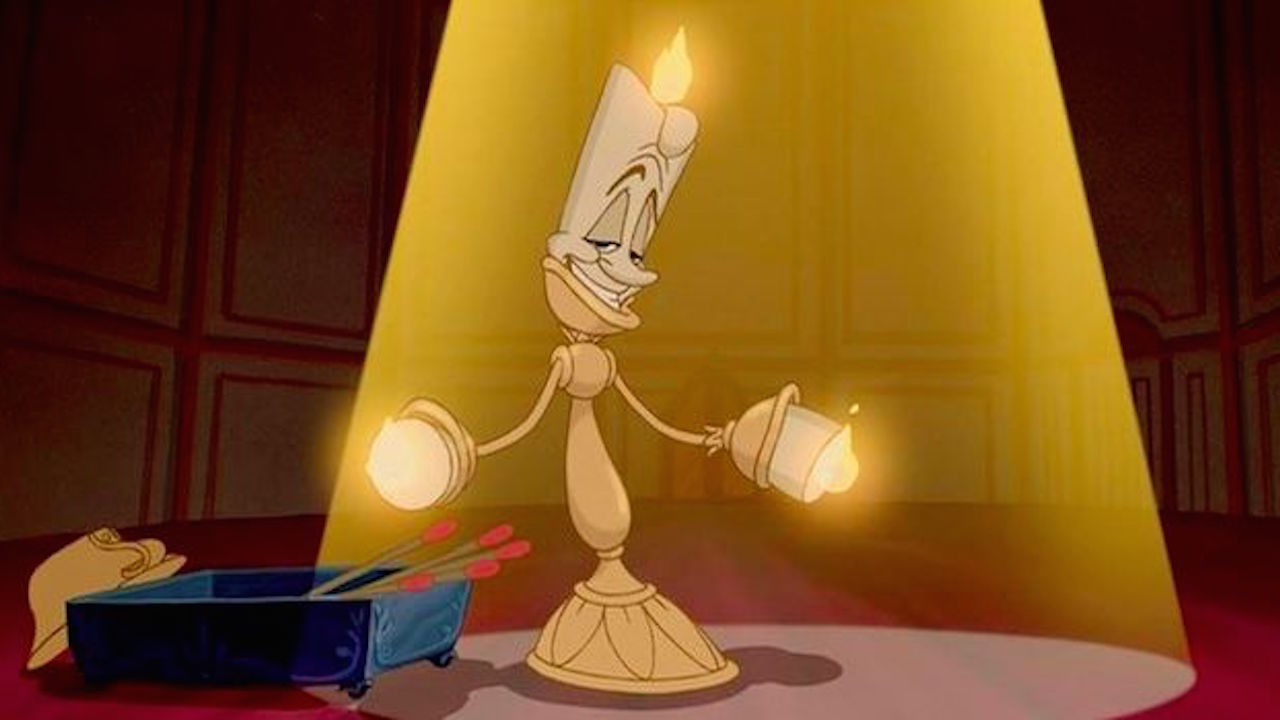 Another character that could make the cut for gem character is Cogsworth, though I tend to think he won’t be simply because he’s sort of downer and no one wants to BUY a downer.

Honestly, who will sing “Tale as old as time, true as it can be,” if Mrs. Potts isn’t there?

While I think it’s highly possible that Chip WON’T be a Welcome character, I like the idea of he and Mrs. Potts coming as a duo.  It would be a first for DMK, but I think it would be super fun to see.

As much as I love Lefou, I think he is a character that won’t make the cut.  That’s unfortunate because I think the dialogue and “Plan Making” between he and Gaston practically writes itself. 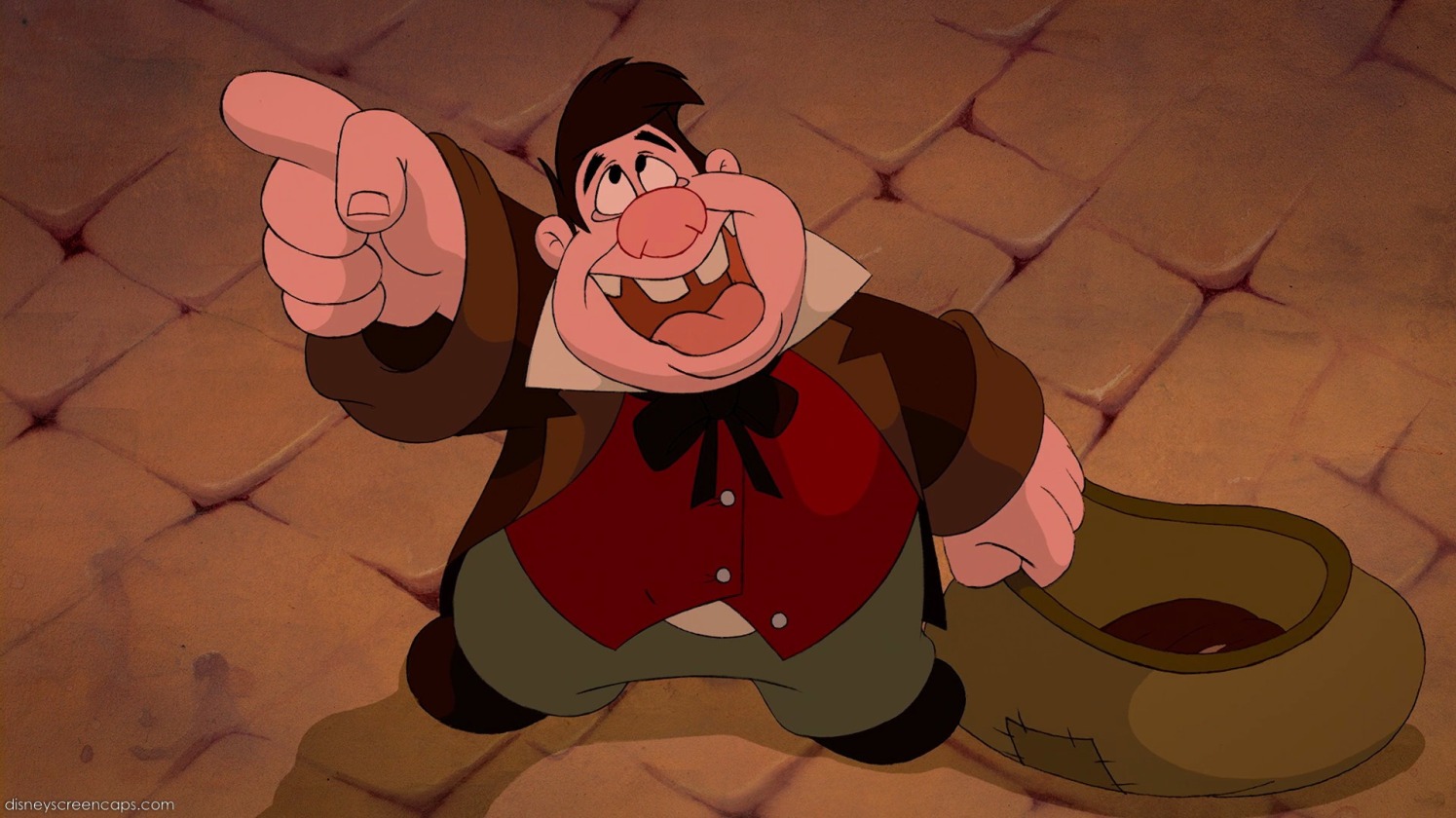 Phillipe probably won’t make the cut.  After all, we already have a horse and a reindeer, but he’s worth mentioning for the cuteness factor.  Plus, if we get enough animals in the park, we can have a farming mini-game!

I mean…we won’t get this guy, but wow is he creepy.  I personally hope we can welcome him AND kids have wishes to see him, but only the kids who dress in all black and listen to All-American Rejects.  Also I hope he becomes essential for all future Donald costumes. 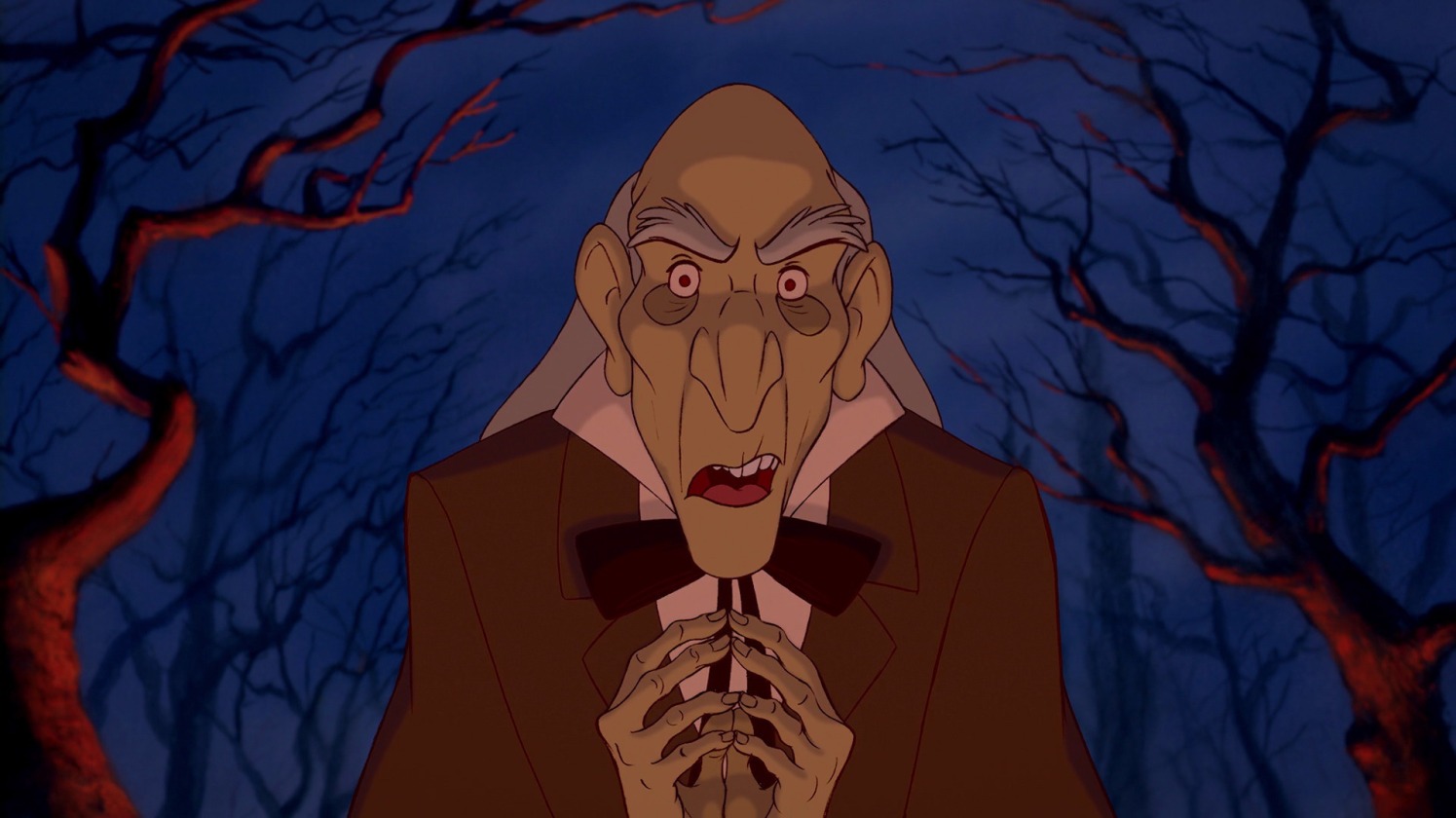 When we got that sneak peek at the icon, some buildings could clearly be seen behind Belle’s face.  Here are the attractions I think we are most likely to see.

This is a NO-BRAINER.  I think it will be the last building to grab and it will probably cost a fortune, but I will pay anything.  ANYTHING I SAY!!

Simply for the fun factor of the look and for being one of the most recognizable buildings in the film, Maurice’s Workshop has a very high probability of being an attraction.  Did I mention I’ll need some space to put all of this?  I mean, the workshop might be fine, but I can guarantee Beast’s Castle fits NOWHERE in may park at present.

Because where will he hang all the trophy’s if he doesn’t have a tavern to do it?  Also, if I learned anything from the Pirates update, Taverns are a GREAT place to “Hatch a Plan.”

Something interesting to come out of the icon launching too early was that we first got Belle in her gown and THEN got a second icon with Belle in her normal blue dress.  This leads me to wonder if we might get a costume change for these characters.

I would guess we would start these characters off with normal costumes and then have to collect tokens once more to get them ready for their majestic dance. Is This an Event?

That final question has got me really diving deep with all of this.  When I think about all the potential of Beauty and the Beast and how many characters there are and things like costume changes, I almost think it won’t be an event.  There’s simply too much here, and these are characters that I could see easily fitting into the main storyline and giving us that big chunk of content we’ve been hoping for since forever.  My guess right now is that it won’t be an event, BUT I’ve been wrong before so we’ll just have to wait and see.

So who do you think we’re getting?  And what attractions?  Will there be other costumes?  Is it an event?  Let me know in the comments below!  I am dying to hear your thoughts!!