It sort of feels like we haven’t talked in a while right?  I’ve been super busy preparing for a big home move, and I’m also getting married in less than two weeks.  So things have been a bit on the crazy side!  However, I am so glad that today we have a great chance to reconnect as we chew and digest everything that has arrived in Update 7 – The Frozen Update.  While the event won’t officially start until tomorrow at 11AM EST, I thought it might be fun to dig through the patch notes, see what surprises lie in wait and ponder the little changes that have already arrived.  Let’s jump right in!  Please note, I’ll be using some of my own pictures and some directly from DMK’s Patch Notes. 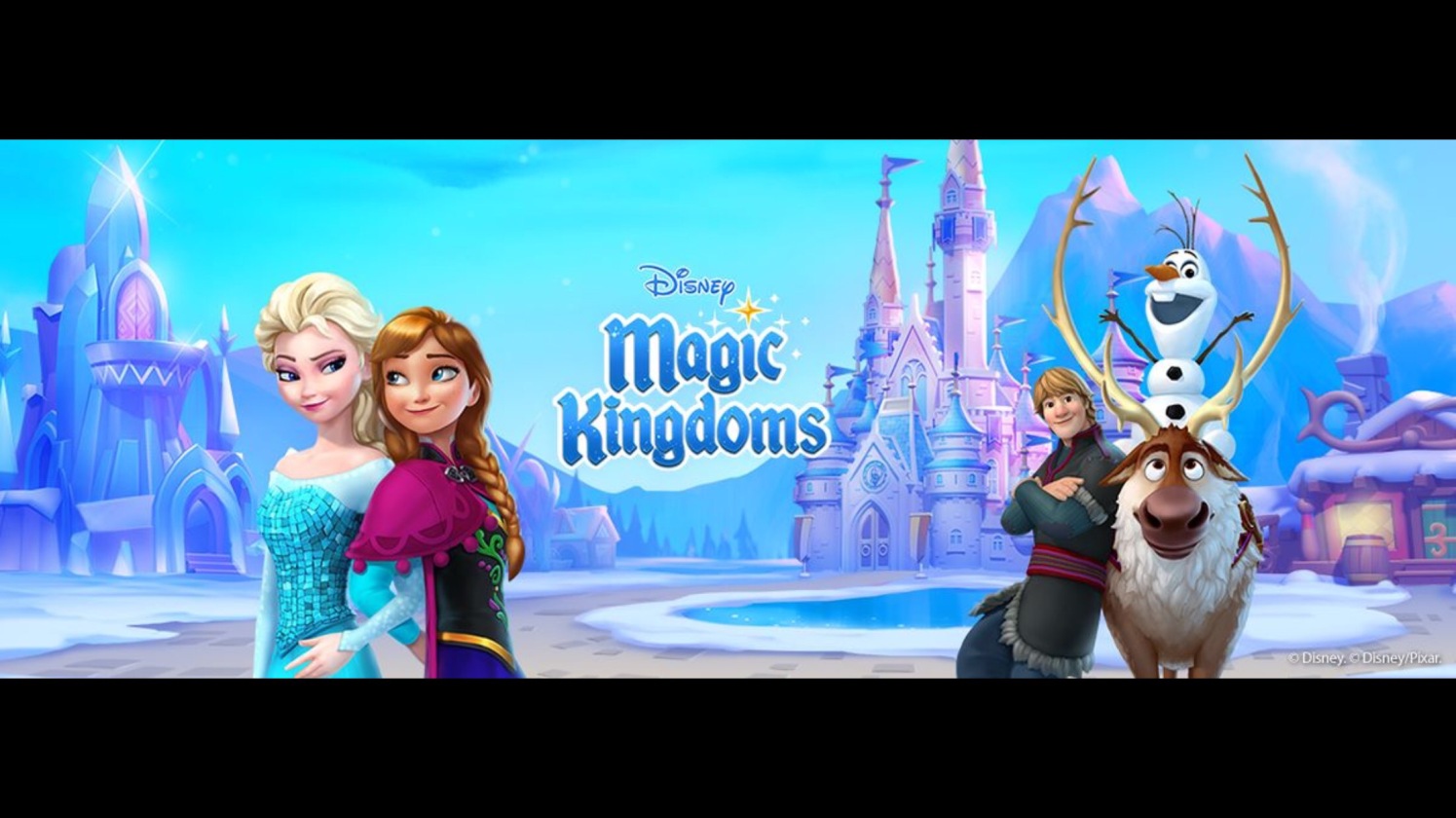 A storm is brewing in the Kingdom! Anna arrives and is determined to tackle the storm, and find its source, with the help of her sister, Elsa. Along the way they team up with Kristoff, Sven and Olaf as they all work together to put an end to the storm and restore order to the Kingdom. However, there is someone that hopes to use this chaos to their advantage and make himself seem the true hero of the story by any means necessary: Prince Hans. Get ready to welcome Anna, Elsa, Kristoff, Olaf, Sven, and Hans from Frozen during our wintery Event starting on December 8 at 11am EST!

As we suspected, ill tidings are afoot in the Kingdoms and it seems Hans is behind it.  If you read this blog regularly, you’ll know that I was a bit surprised to see Hans be part of the event.  To me, he just doesn’t seem like an important enough character.  I suppose he is the villain.  But when you consider the characters of the past few updates; Pirates, NBC and Cinderella; it just seems that only the best of the best characters made the cut into the game.  Here we are getting pretty much every important Frozen character.  I suppose this has a lot to do with the fact that Frozen is simply THAT popular.  Regardless, I’ll be happily working to recruit all of them so that they can ‘Make a Plan’ for 8 hours.

Everything New in the Update

Here is just a quick and dirty list of everything that is new to the game.  Much of this will be covered in much more detail in my future updates as it becomes unlocked.  But at least we can look at the list and drool.  Well, for the most part.  I see you Ice Bench!  I know the pain you will cause me when all I really want is the Olaf Sand Sculpture!!!

Interesting to note, there are no big surprises as far as attractions like we had last time with Tower of Doom.  It seems the Devs wanted to prevent the “BUT WILL I BE ABLE TO GET IT AFTER THE EVENT?!?!? question that plagues things that live in the Chest grey zone like Tower of Doom.  Either way, I’m sure we’ll be able to get tokens for Frozen characters out of the chests, which will make them extra rewarding during the week of Christmas when we are sneakily playing DMK under the table while Grandma toasts to health and happiness.  Yeah Yea Grandma, whatever, I’m welcoming Kristoff.  That’s MY health and happiness!

Waking up to find the Kingdom done up in Holiday goodness was pretty special.  No really, I’m actually not being sarcastic!  It is really lovely.  For a while I just zoomed in and took everything in.  It’s the first time we’ve gotten a full makeover like this and it really is super adorable.  Here are just a few of my favorite details I’ve found so far.

As we travel up Main Street, we see snow coating the tops of buildings and lovely wreathes over the street, inviting our orphan guests (because let’s face it, they lost their parents) into our Winter Wonderland. In particular, I love the little touch of the snow covering Mickey’s top hat.  It’s such a little detail but it just adds this extra layer of immersion.  That’s right, I used the word “immersion” to describe snow on a top hat. Sitting on this roof, and some others, are gifts just waiting to be opened.  Although, given that the chimney is RIGHT THERE, I’d go so far as to say that Santa missed.  Or just got lazy.  Maybe it was time for his Union break?  I’m sure he’ll be back to finish the job later. All around the Partner’s Statue are lots of fun little decorations to be found.  The red bows on the gates around Walt and Mickey are a lovely little touch of color, and you might also notice that the water itself has frozen over.  It hasn’t frozen over anywhere else in the park though.  And they say global warming isn’t real! 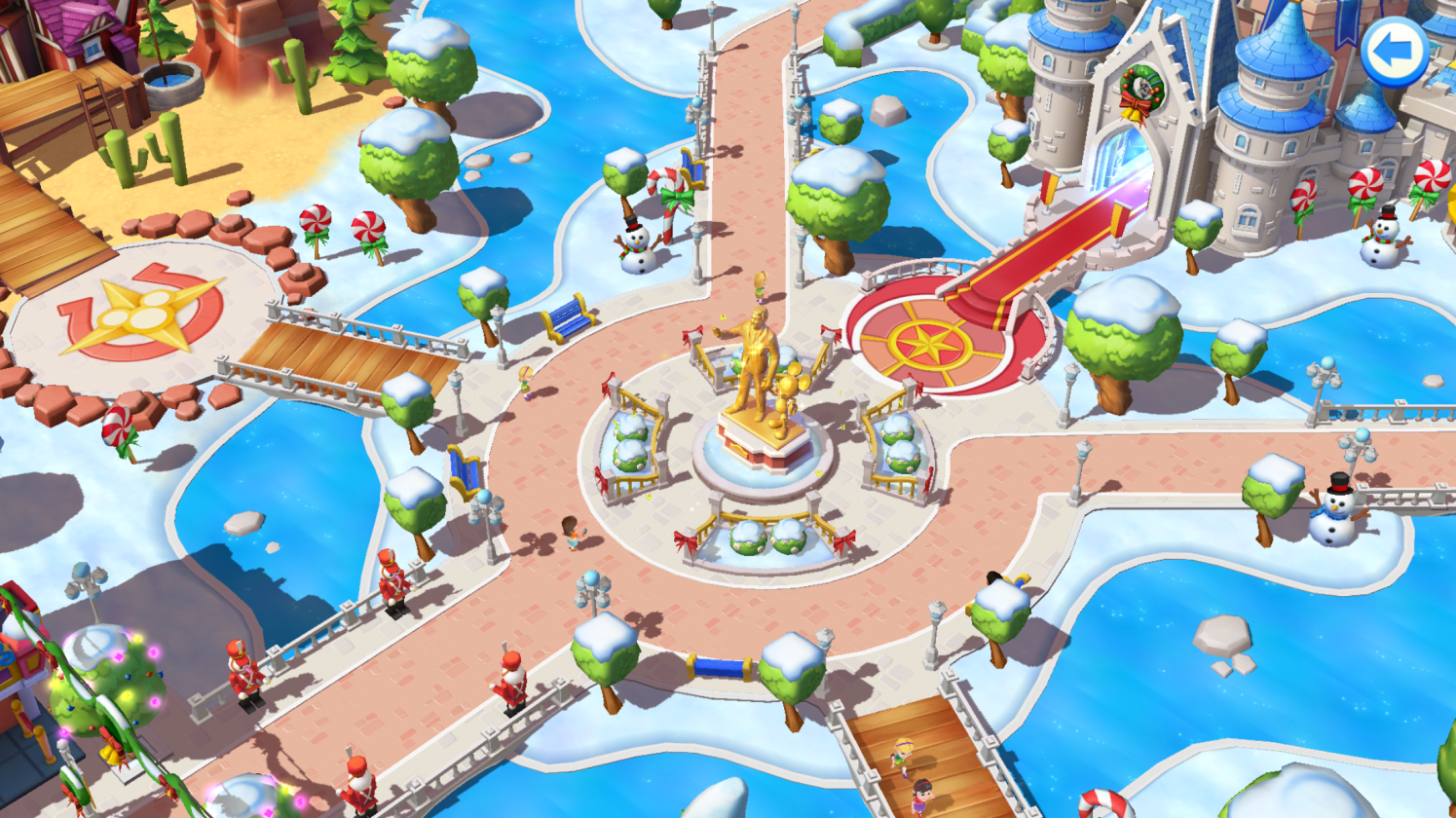 Look closer at these soldiers and you’ll find that they’re actually snowmen in disguise!  Perhaps they are trying to infiltrate our Kingdom by stealthily working their way into our hearts!  Or perhaps snowmen in tin soldier costumes are just adorable.  I guess we’ll never know. There are several snowmen littering the park, but these two stuck out to me.  They really remind me of that first time you go to a Disney park.  A smile covers your face and you simply get frozen in place by how amazing it is.  They’ll have to move sometime though because those lolipops look delicious! The castle itself has been done up in a simple wreath over the entrance, but the colors of it seem strangely fitting for this event already. And of course, no Christmas themed event would be worth its weight in pine needles without a Christmas tree.  One does wonder if this will play into the event or any of the Character Quests at some point.  I suppose we’ll just have to wait and see. From the Devs, here is everything you need to know for the event, right down to start time, end time and what will be involved.

We will be covering Snowgies in much more detail once they actually arrive in the event, but the patch notes go over them briefly, so I thought we’d take a sneak peek at what’s ahead.

It seems that Snowgies will continuously roam the Kingdom and can provide Frozen Snowflake tokens, Event Currency and Experience when you collect them. 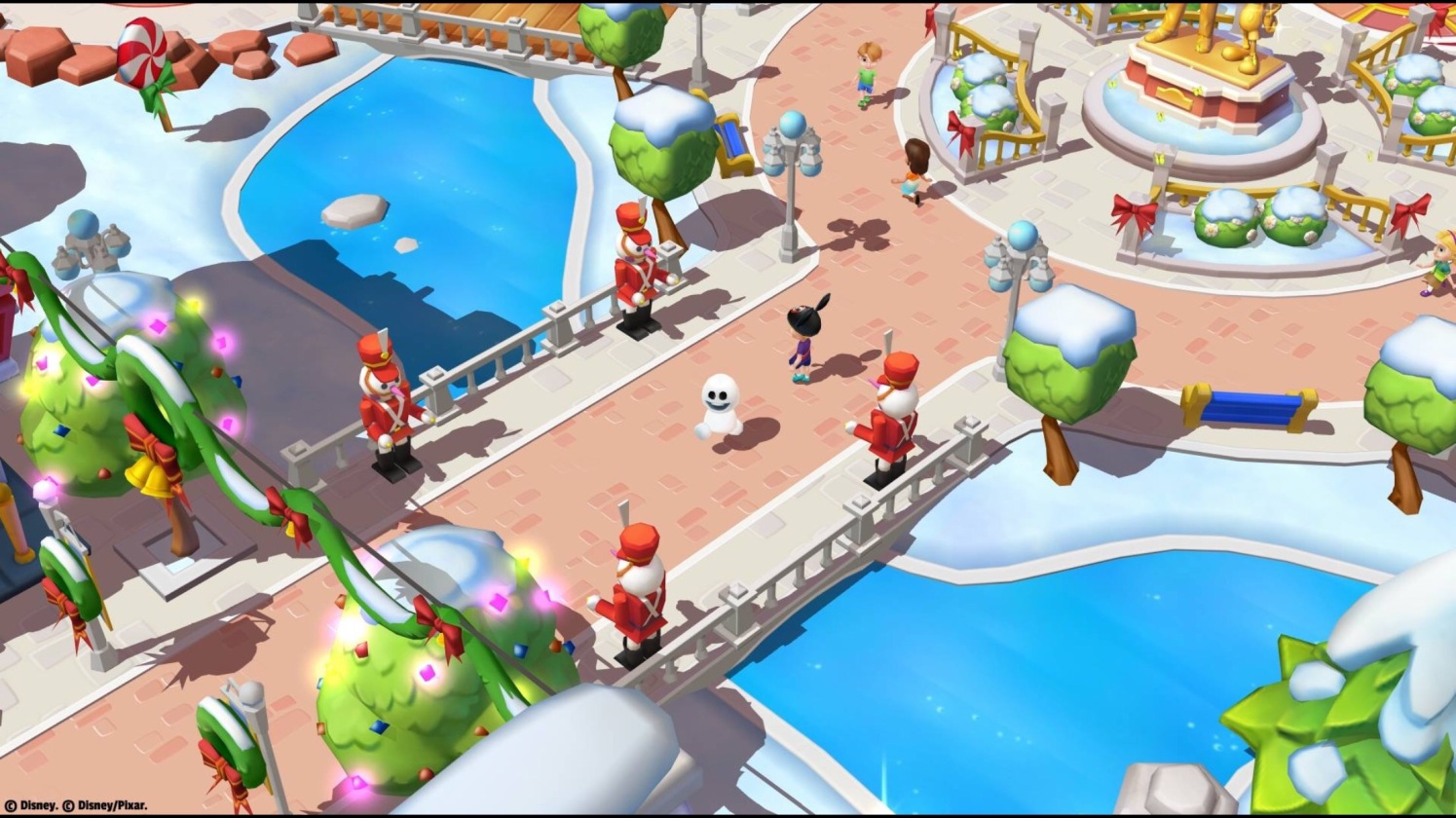 In order to actually capture them, you will have to spend some special tokens which will basically give Anna, Kristoff or Olaf a bag and rope to snag a Snowgie.  That’s right kids!  In the new update, you too can create your very own Snowgie Kidnapping Kit (Some assembly required.  Batteries not included.) 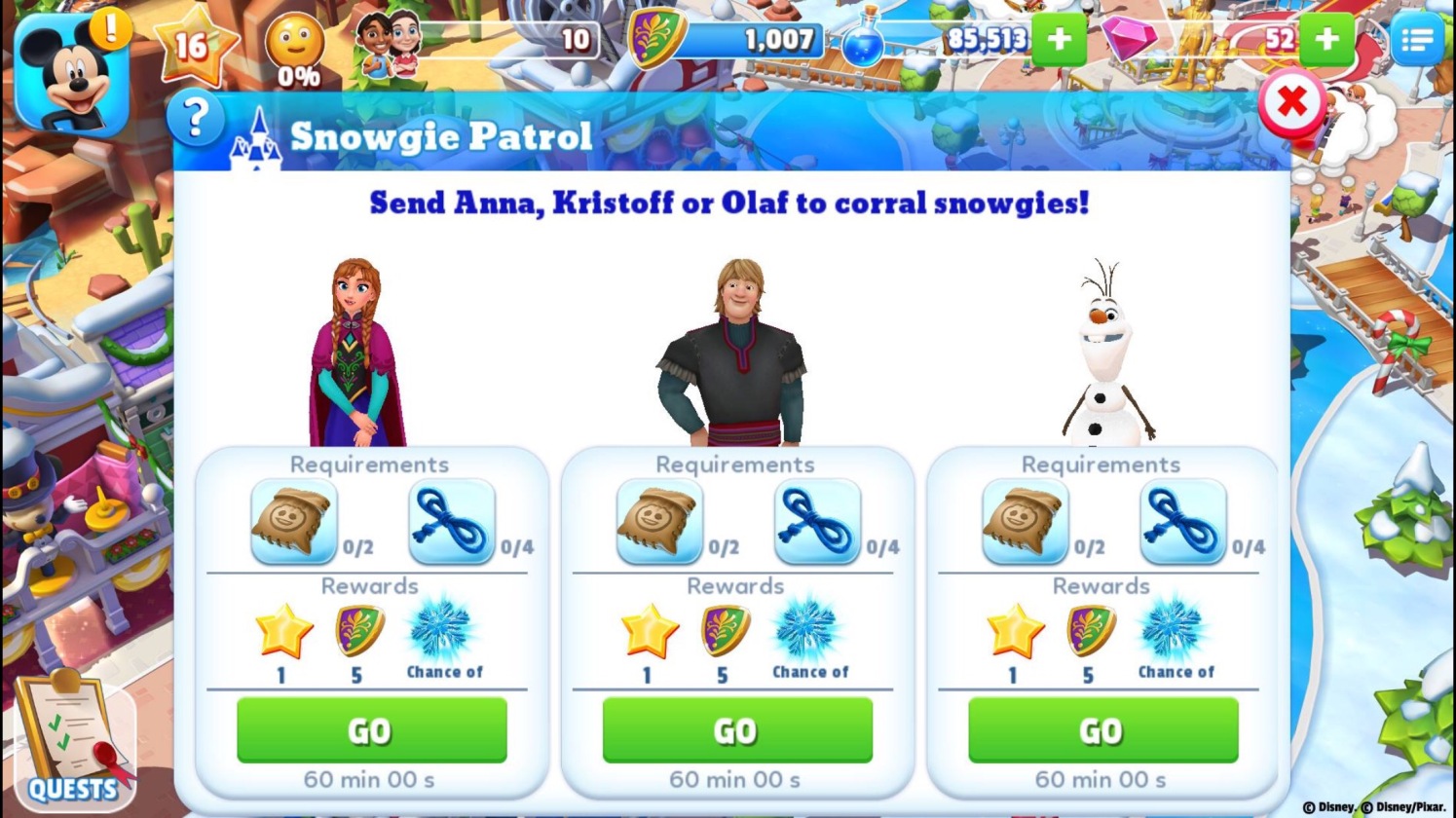 Are you feeling cramped?  Has space got you down?  Well never fear, sometime, hopefully early, in the event you’ll be able to open up a new piece of land to put everything Frozen on.  ONE PIECE OF LAND!  Oh man.  This is going to get stressful.  Sorry Bench and Rose Bush Park, you might need to go away for a while.

The new land will be located in Tomorrowland which is great for Elsa because she loves space travel and research…right? 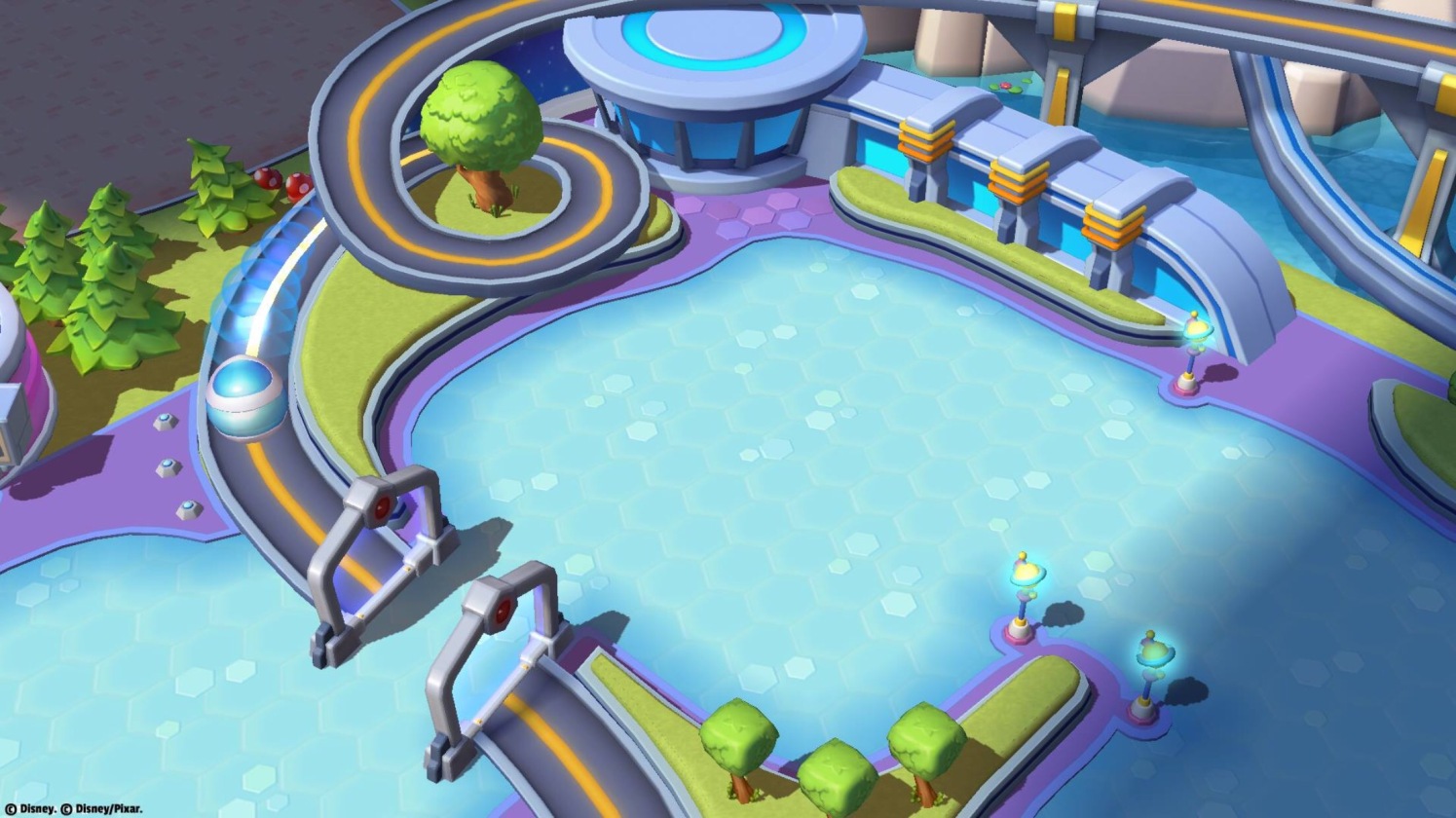 Huzzah!  That petition we signed and mailed to our senators worked!  No more Lampposts and Fire Hydrants!  We really can accomplish a lot when we work together!

I actually think this whole Flash Card thing with the tutorial is great.  It’s clear to me from reading through DMK facebook groups that despite the guides on how to play in the game, many people still have a lot of questions.  I’m hoping that the flash card system, which simply means you click on the question mark on any given thing to see how it works, will alleviate some of these problems.

There are a lot of these so we won’t go into every single one, but here is a list of ALL the balancing changes, so nerd out with numbers folks.  This part of the blog post is for those with an eye for the super technical.

A lot of this is just to help, as the name of the section implies, balance the game.  The most interesting thing on the list is at the top in the fact that the player level has been raised.  I am nowhere near level 51, but I know many of you are, so this comes as a great reason to start the push to 61!  You guys and your levels!  By the way, if you are actually at level 51, let me know in the comments!  I just want to say that I know you!

Aw yes, the part of the patch notes relegated to the bottom where no one will ever look or care.  Still, let’s take a peek.

Not a lot to see here other than a visual fix to make things more understandable.  Bug Fixes are important though.  The Devs have said that they will not open new Lands until the game is performing just right.  That means that every update, and every bug fix, gets us one step closer to Adventureland and Frontierland.  That is worthy cause for Bug Fixes if I ever heard one!

We’ll all be meeting back here tomorrow to start our Winter Adventure, but in the meantime, let me know what you think of the changes so far and how are you feeling about your Kingdom being done up for Winter!