So you went ahead and planned a game night. You invited all your friends, bought some wine, ordered some pizzas and set out a selection of great games. Maybe we’ve even talked about some of them here on the blog. You feel good about your party planning skills. Then a phone call comes in. It’s your best friend. They can’t make it. Something came up. It’s okay, you tell them. Next time. You hang up. Another call. Another cancellation. The calls start to trickle in and before you know it, you and your significant other are the only one’s left. Pizza is on the way and wine is still chilled. You might be thinking that game night just went belly up, but I am here to tell you that there are some EXCELLENT two-player games. Today we’ll be talking about one such game. When all else fails, have no fear, Raptor is here.

The time is now. The place is an isolated island in the Pacific Ocean. Professor Lendenbrock, (Not kidding, that’s his name) an esteemed paleontologist, has long suspected one simple truth which has now been confirmed: Dinosaurs still live in our world. After sending multiple scouts and having at least some of them return alive and with all their limbs, his team has managed to pinpoint the location of six raptors, a mother and her babies. The Professor and his crew hit the island in hopes of neutralizing the mother and capturing at least some of the babies to bring back for research. Yet, raptors are smart creatures and it will take more than a simple trap to take down this family. The hunt is on. 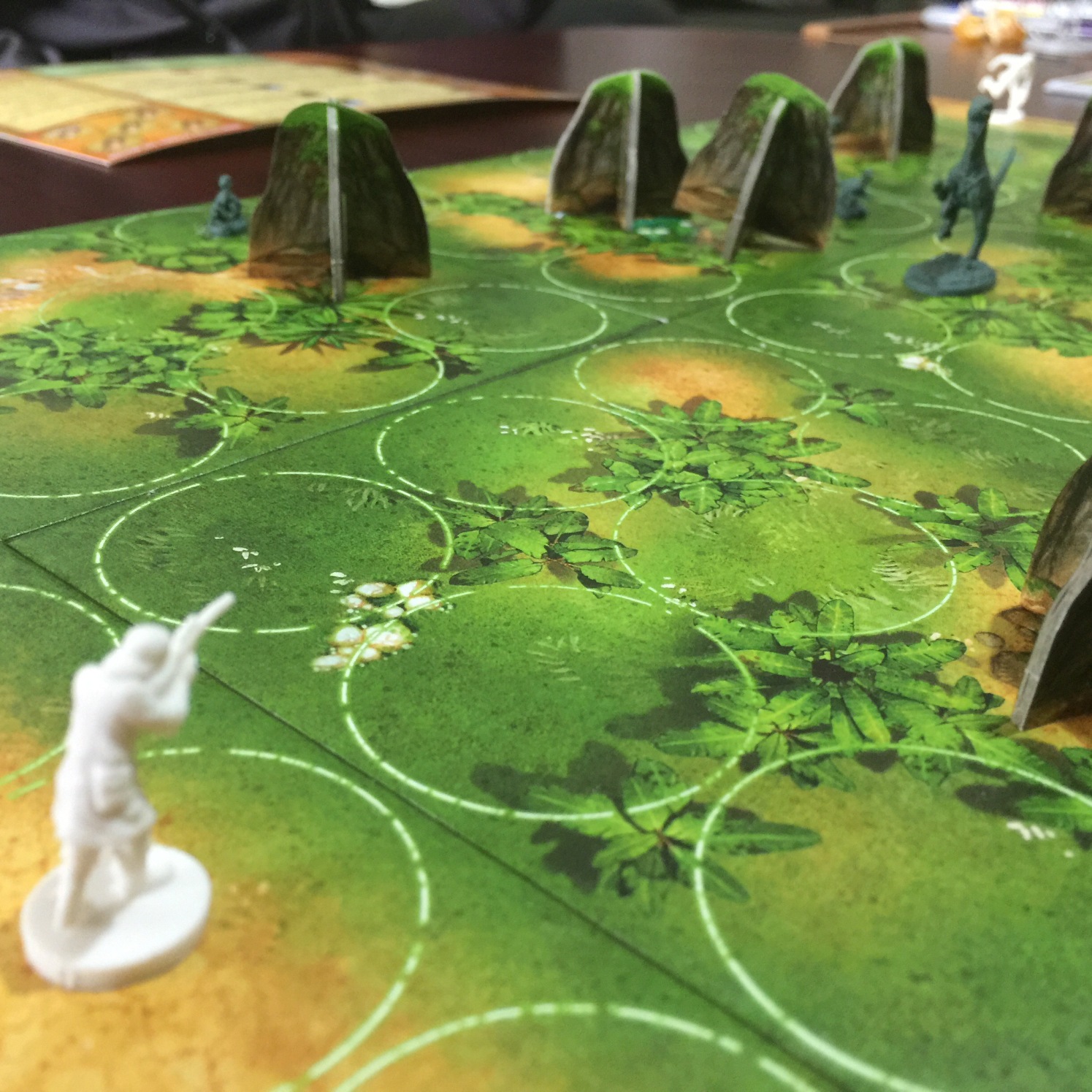 The hunter lines up his shot.

Raptor is what we call an Asymmetrical Game. This means that while the two of you are playing on the same board, your goals and abilities are different. We’re going to start a little backwards on this one, as I believe knowing the win conditions here actually helps make the whole game make a lot more sense. Each side wins if one of their two goals are met.

The player controlling the hunters wins IF they manage to shoot the mother raptor 5 times, thus putting her to sleep OR they manage to capture 3 baby raptors.

Meet the hunters, and that one guy that seems to be running to work with his briefcase. Who invited that guy?

The player controlling the raptors wins IF they manage to get three baby raptors off the edges of the board, thus getting them to escape the hunters OR if they use the mother raptors to kill off the hunters and no hunters remain on the board at the end of the round. 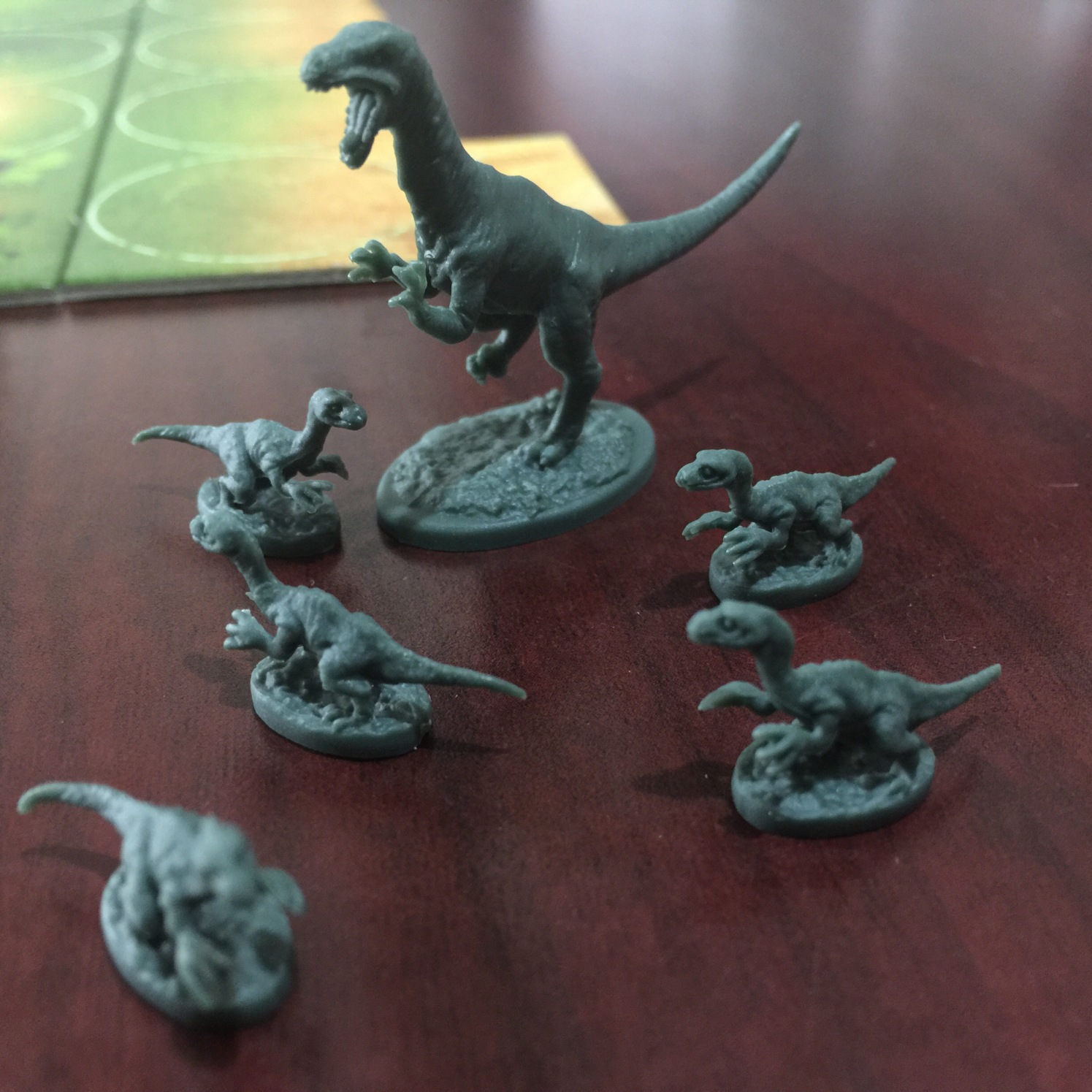 Aw yes, even raptor mothers have evolved to loudly nag their children.

Each player will place their pieces. The raptor player places the mother in one of the central tiles and then one baby on each other tile. The great thing about these tiles is that they are randomly placed and each side has different terrain so one strategy typically won’t work twice and you’re constantly reassessing the best way to use the configuration of the board to your advantage.

The Hunter then places one hunter miniature on each of the L-shaped sides of the board and the hunt commences. 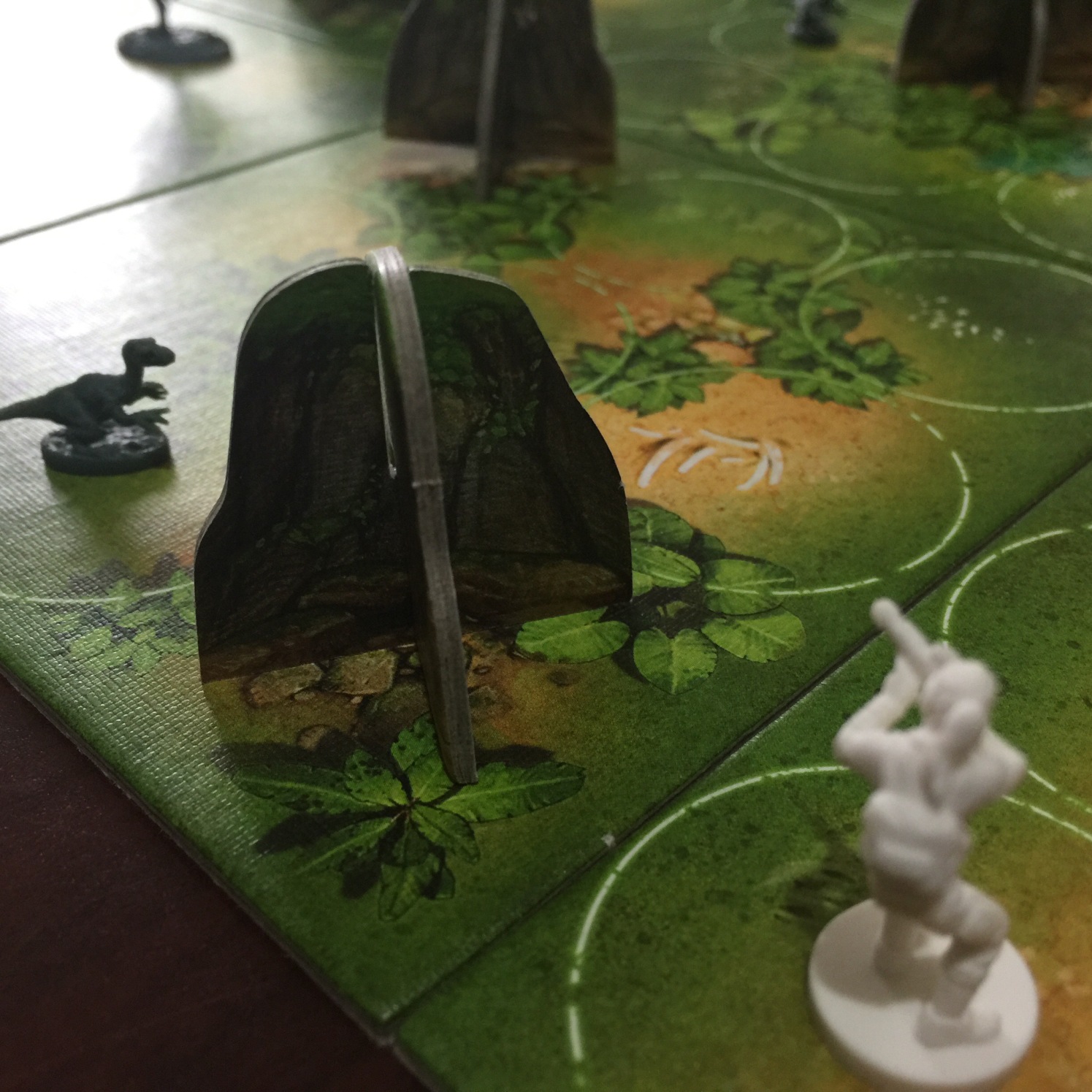 Each player will have a hand of three cards. Each card has a different power and number, 1 through 9. Each player secretly selects a card from their hand and then places it face down.

Once both players have done so, they flip the cards. Whoever has the lowest number, performs the action on their card first. The player with the higher number loses the power on their card but gains action points for the difference of the two cards. So, if I played a 3 and you played an 8, I would get to do the power on my card, but you would get 5 action points to spend. 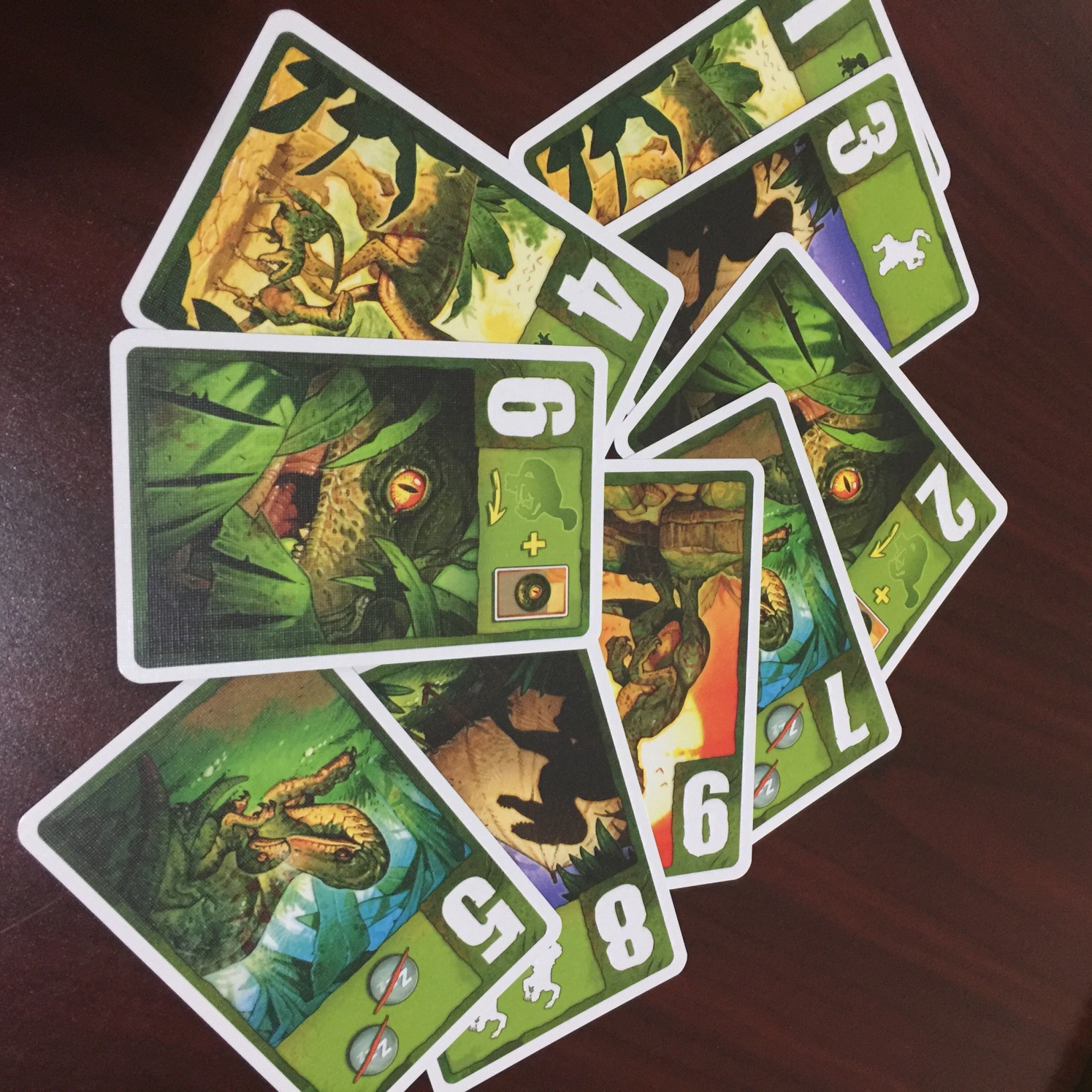 Raptor cards typically involve hiding and then ambushing or simply shaking off the sleeping darts that the hunters continue to pummel the mother with.

The powers on the card can be quite powerful. For example, one of the raptors powers allows you to pull the mother off the board until the end of the round and then place her anywhere. Because of this surprise attack, you also get to look at your opponent’s next card, before deciding on yours. Hunters can typically only move one space at a time but a jeep card allows them to fly across the board in style.  The Hunter player will also want to set traps.  Setting fires allows them to make it much harder for the baby raptor, or the mother, to escape.

Fire safety is not one of the themes of Raptor.

The raptor also has cards to remove tranquilizer dart tokens and wake up her sleeping babies, which is important because hunters can only catch the babies after putting them to sleep. Yet, even if you end up with the higher number, you still have some pretty important things to do.

As the hunter, you’ll want all of these lovely bullets to be in the mother raptor.

For example, action points can be used to move hunters or baby raptors.  They can be used to kill hunters with the mother raptor or to stand up after being terrorized by the mother raptor’s roar. Since so many things can be done both with card powers and with action points, you’ll find that you often try to play the higher card, just to get those action points. It’s a delicate balance of which side of your abilities you actually want to do. It’s also a game of luck because your opponent could play the opposite of what you were hoping and mess up your whole plan. Or worse, you could both play the same card, in which both cards are discarded and no one gets anything. 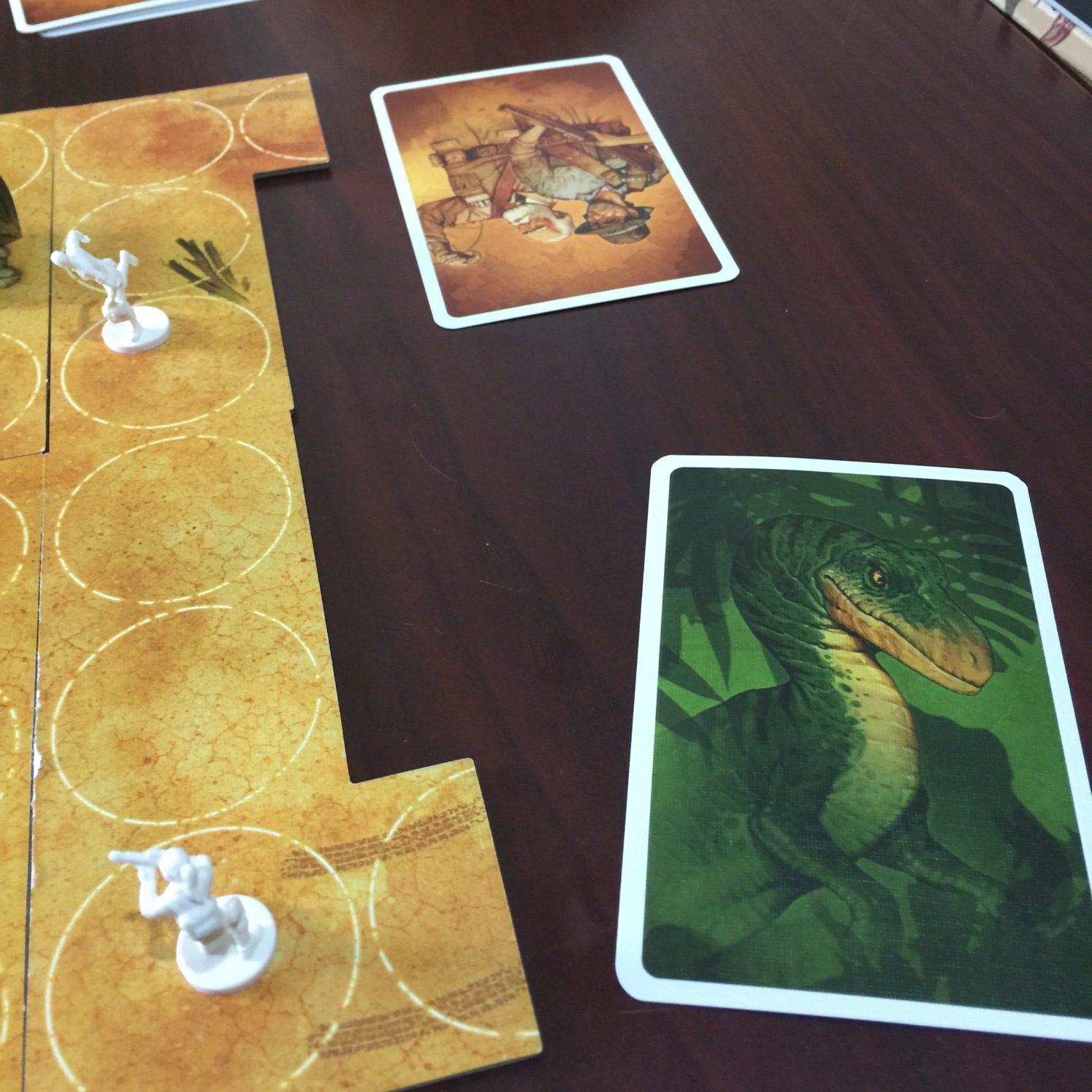 The tension as the cards sit face down is enough to make anyone sweat a little.

With all this information the game might sound complicated but the player board does an excellent job of having all the necessary info and you’ll find that playing cards and using abilities, while trying to ultimately win is extremely easy and intuitive. I’m always a fan of games that don’t require me to check the rule book once I’ve read through it once and this is one of those games.

Don’t be alarmed by all the text. This player board is your bestest buddy and always has the answers you seek.

What is so great about Raptor?

A major thing I love about this game is that it’s a two player game that isn’t a collectible card game. SOOOO many two player games come down to decks of cards and collecting and dueling. Yuck! I mean, if you’re into Magic, more power to you but I am not a collect them all kind of guy. Well, except for Pokemon. Aww, Pokemon. Wait, what was I saying? Oh right, Raptor.

No need for big decks of cards. You have fire and bullets.

I also love that this game is so easy and fast. In 45 Minutes, we managed to play two games. This is great because it means that you can try both sides and still want to play more of the game. Because there are two sides of the board, our games also felt different. I won the first and Carl won the second which is great because it means there is a beautiful balance to be had here.

Simplicity is so important in some games and this game does a great job of presenting a ton of abilities and ideas, while making them all very easy to understand and quick to learn.

Are you my mother?

What could make Raptor even better?

Yeah, okay, I know I’ve been going on and on about how great it is to have such a unique two player game, but let’s turn the bus around for a moment. I would love love love to see a 4-player version of this game. Maybe it means teams, or maybe it means two more factions with other win conditions. Either way, I just know that this game is a blast and I would love to be able to get more folks in on the action.

Raptor really is just an elaborate game of Hide and Seek.

Raptor is a great way to breeze through an hour or two with a close friend, partner or spouse. It’s competitive while not feeling overly cruel and it’s simple enough that anyone can pick it up. I’ll also mention that there simply aren’t enough dinosaur games out there and this one manages to take the theme and fly with it. It’s unique and interesting and because both players play cards at the same time, there is very little down time. I never once felt bored while playing this game, which is always a good sign. Need a game night for two? Look no further. I’ve hunted the raptor family. I’ve fought back the hunters and protected my young. Now It’s Your Turn.