If there’s an award for most epic film on our list so far, Tarzan wins it in about five minutes of screen time. This film has crazy boat sequences, insane baboon chases, gorilla fights, leopard fights, gorilla vs. leopard fights. Every shot is big and grand and every sequence feels like something you might find only in the climax of any other film. More than once, I exclaimed “Wow!” after watching a chase or a battle. Yet, even with all this action, Tarzan also manages to be deeply moving and a story that has resounding themes of loss and acceptance. While Tarzan might stray just slightly off the track of perfection in its third act, this is a grand film that will have you covering yours eyes, only to peak out once more at the glorious action that is happening before you. Nothing as epic as that smell though. Hey-o!

President of Disney animation Thomas Schumaker was suprised to find that Disney would be the first company ever to turn Edgar Rice Burroughs’ novel into an animated film. After all, he found that it leant to being animated. Tarzan as a character could have more of an emotional bond on screen with animated apes than he ever could with real life or even animatronic ones. Kevin Lima was actually approached to work on the project after finishing A Goofy Movie but wasn’t interested. After Katzenberg’s resignation, Eisner approached Lima again, offering him a better team of animators, and he signed on. From here, he would read Tarzan of the Apes and fall in love with the idea of two hands touching palm to palm as a means of Tarzan discovering who his people are. He took this idea to animator Chris Buck who had just finished Pocahontas and Buck signed on as well. Production began in 1995 and early on Lima knew that he didn’t want some man in a loin cloth sitting on a tree and singing. In order to give the film the musical edge that fans were coming to expect from Disney, Phil Collins was brought on to write songs. Within his songs, he also became the abstract narrator of the film. Collins basically wrote the songs after reading the original treatment for the film. He improvised Son of Man, Strangers Like Me and Trashin’ the Camp after this read through. In the meantime, the production team did extensive research on apes by traveling to Uganda and Kenya, as well as several zoos. They studied documentaries and the musculature of the gorillas, not only to animate them, but also to animate Tarzan. Several studies were done on human musculature as well in order to give Tarzan the appropriate movement and look, while still enabling him to move like one of his ape brothers. You’re one of us-ish…

Glen Keane had the idea to have Tarzan surf through the trees early on, thanks to his son’s love for extreme sports. The directors didn’t want Tarzan to become a surfer dude and were concerned on this take, until he showed them a test scene he had done which became one of the biggest features of Tarzan’s character and the film itself. Something else originally not intended for the film was the fact that Turk is a girl. Turk was written as a man until Rose O’Donnell auditioned. Her audition was so good that Turk was changed to a woman. Take that gender stereotypes! Welcome back to the Rosie O’Donnell show!

Clayton, our villain, was actually manufactured for the film, in order to keep the third act in the jungle and put the apes into trouble. Originally, Tarzan leaves the island and heads to London, but the directors felt this was too much of a departure from the central story. A last fun fact about the story was that the sequence of Tarzan discovering the treehouse was meant to feel like a child learning for the first time that they are adopted. In order to accomplish this, adoptive parents and adopted youth were interviewed in order to get the feeling just right. Tarzan is a sight to behold. From the introduction and on, all the animation feels incredibly top notch. It feels like an enormous leap from our past several films. The water and fire all seem so real and the jungle feels so lush. I mentioned at the offset that every sequence of this film feels huge. The fight with the leopard could easily be the final showdown in another film. The chase from the baboons feels like a high action summer movie. Even simple things like diving under water to see the hippos feels like it is being seen on a grand scale. This is the kind of movie that could easily be watched on an imax and fill the screen perfectly. Along with this epicness, though, comes a sense of danger. In many ways, this is the scariest film in the lineup so far. Tarzan’s parents found dead in the treehouse with bloody paw prints is pretty horrific and this terror of a leopard trying to kill babies is pretty haunting as well. To that point, the idea of Tarzan losing his parents in the same way that Kala lost her son and then, against all odds, they find each other, is really beautiful. We’ll talk more about Clayton as a villain but his death is easily one of the most gruesome as he accidentally hangs himself to death. Yikes! The film is truly brutal and even borders on gory at some points BUT this also serves to make the jungle feel alive and mysterious. Tarzan is one of the most subtle characters we’ve seen. Watching him learn and grow and try to understand how he fits into this world is a process that the filmmakers treat very delicately. The little details like him learning to flap his ears like a hippo or make a baboon noise seem insignificant until suddenly he’s using these same tricks to learn to speak with other humans. For such a savage beast man, he is quite intuitive and picks up on things very easily. He’s also a great character in that he just wants to do the right thing. He so badly wants to please those around him, but can’t possibly do this until he knows the truth about who he is. He’s a kind soul and watching him grow up really connects us to him as a character. Jungle men don’t bring you flowers. They bring you birds. Lots and lots of birds.

The only sad thing about Tarzan being so impressively fleshed out is that none of the other characters really ever hit that high point. Clayton is a pretty standard hunting bad guy. We’ve seen this before, the idea of man vs. nature, and nothing about Clayton feels particularly unique. The same goes for Professor Archimedes and even Tarzan’s friends, with maybe the exception of Turk who’s tom boyish nature does manage to make her stand out from the pack a bit. Many of these characters just feel like archetypes and there to serve a central purpose. It’s possible though that this only really stands out because Tarzan is so very complex. If we shake him hard enough, maybe a useful character will come out.

I go back and forth on Jane. On one hand, she stands no chance of being as amazing or powerful as Mulan or Pocahontas. But on the other hand, I really like that she’s so kind and I especially like that she’s quite funny. Her quirky nature makes her very likable and she’s got quite the heart for adventure as well. I also like watching her relationship with Tarzan grow as they learn each other’s world and each other’s language and I especially like that he invades her personal space so easily. I say that, not to sound creepy. I just like the idea of how a human would react to finding beauty like that for the first time, not knowing any of the social norms. Tarzan’s approaches never feel threatening or harmful, he simply wants to see her face as closely as possible, perhaps to make sure that she is indeed real. Haha, just gimme a second while I find my rape whistle.

The trouble with having such a sweeping epic as this is that by the third act, we’ve already been given so much information that a rush to have this conflict between Clayton, the apes and Tarzan all feels a bit thrown together in order to have a true climax. The final battle feels amazing to watch but watching Kerchek’s death never really resonates with me as so much of this happens so soon. It’s a film that begs to have another 20 minutes so that we can really build up to this conflict, rather than have to deal with it all of a sudden at the end. I also find it quite difficult to buy Jane and her father giving up London to stay in the jungle. I guess I buy it, but just barely. 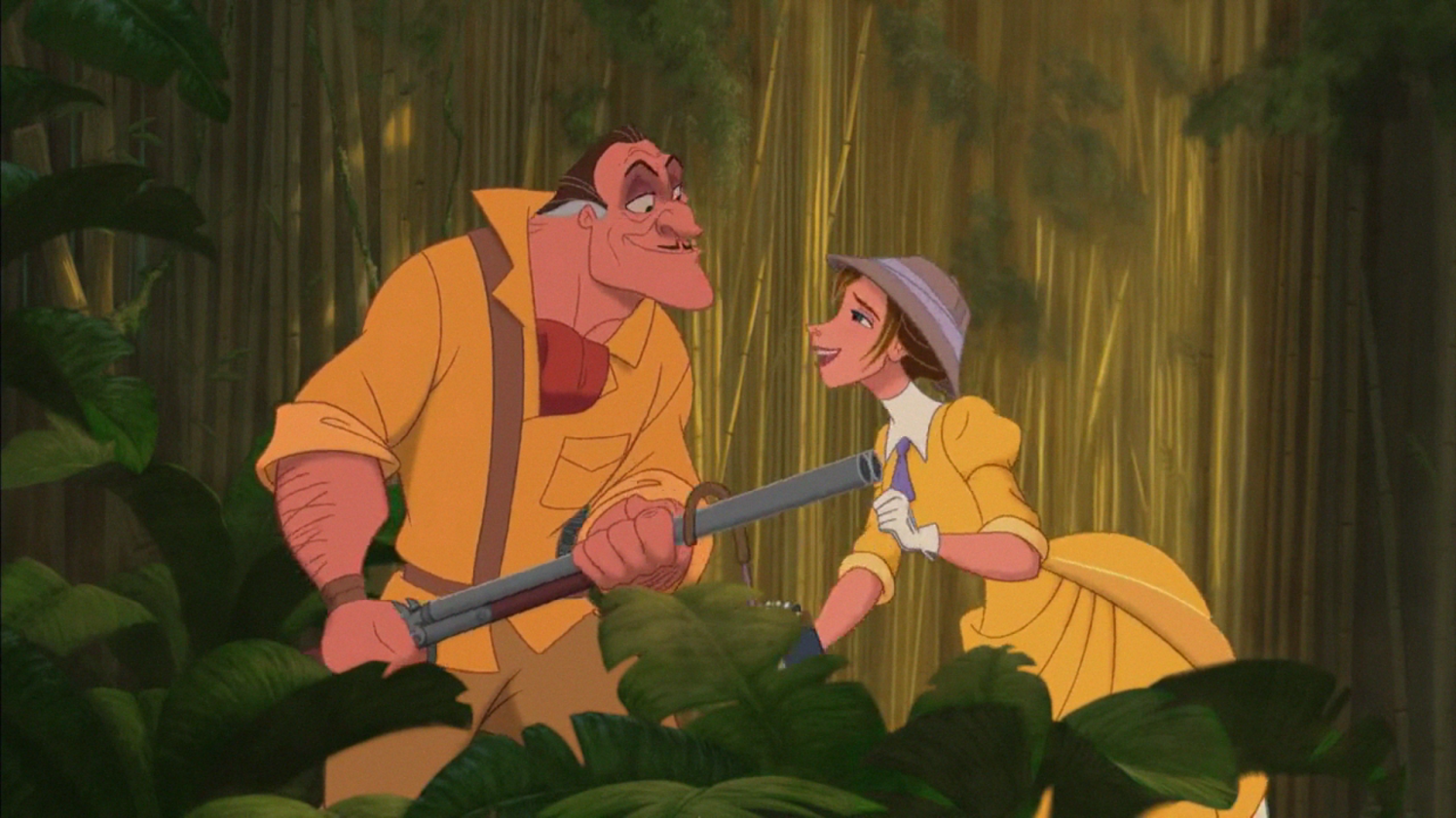 Yes Jane, this is my gun and yes, I am happy to see you.

Alright, I’m being hard on this film, so let’s take a step back. I really did enjoy the film, It’s gorgeous and I found Tarzan as a character to be so amazingly complex. To get to this moment in animation where we can literally attempt to figure out what a character is thinking by looking into their eyes is amazing to behold and I loved going on this journey of life and learning to find one’s place with him. What moves me is not Jane’s love or Kerchak’s death, but that moment when Tarzan places his hand to his mother’s and then his head to her heart and realizes they aren’t the same, only to do it later, and realize that they are. It’s just so beautifully done. Guys, we’re sort of trying to wrap things up here. If you could just…okay fine, go ahead and kiss but Jane, I’m next in line.

Despite some minor flaws, Tarzan is wonderfully done and resonates on a deeply personal level. While not all the characters warrant being around the whole time, Tarzan’s story is unique and interesting and satisfying to sit with for an hour and a half. With a huge jump in animation, story-telling and music, the renaissance is coming to a close and while the future might hold some doozy’s for the Vault Disney project, it also holds some gold medals. Onwards and Upwards I always say. And if Phil Collins doesn’t do it for you, you can always check back next time for some Beethoven. The fun has arrived…and I brought these other dopey looking apes too. OMG! I just noticed that baby gorilla! OMG! He is so cute! I’m going to go squeal in a corner. See you guys next time!