Story and Characters by: Tim Burton

Come one, come all, to a very special and spooky Halloween edition of Vault Disney. Halloween is my absolute favorite holiday of the year. Creepy and cooky, it has everything I love: ghosts, pumpkins, goblins, pumpkin lattes, vampires, pumpkin muffins, dogs in costume, pumpkin bread, dogs in pumpkin costumes. The list goes on. Therefore, it stands to reason that Tim Burton’s The Nightmare Before Christmas would be one of my favorite films and of course, it is. Sitting down to research this film to go along with the project was a no brainer. The Nightmare Before Christmas is unique, delightful, creepy and fun in all the right ways. Now come along, down a dark and twisty path, as we discover what makes is so hauntingly great. 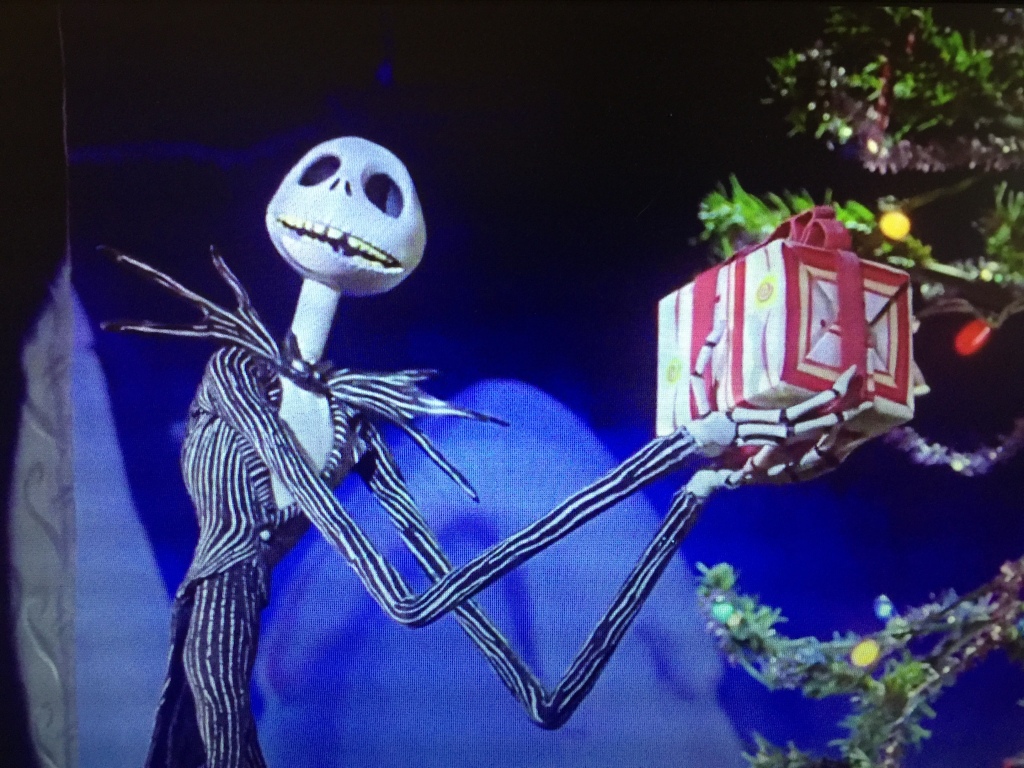 Tim Burton was always intrigued by holidays and once he was an animator at at Disney, this intrigue turned into art as in 1982 he wrote a three page poem titled “The Nightmare Before Christmas.” He intended from that moment to turn the poem into something more. Originally it was meant to be a television special but he also thought that it might make an excellent children’s book. He made concept art and storyboards and with the aid of Rick Heinrichs, created sculpted versions of the characters. Eventually, all this pre-work would fall into the lap of another animator, Henry Selick. With the backing of these two, Disney started to consider developing the project. 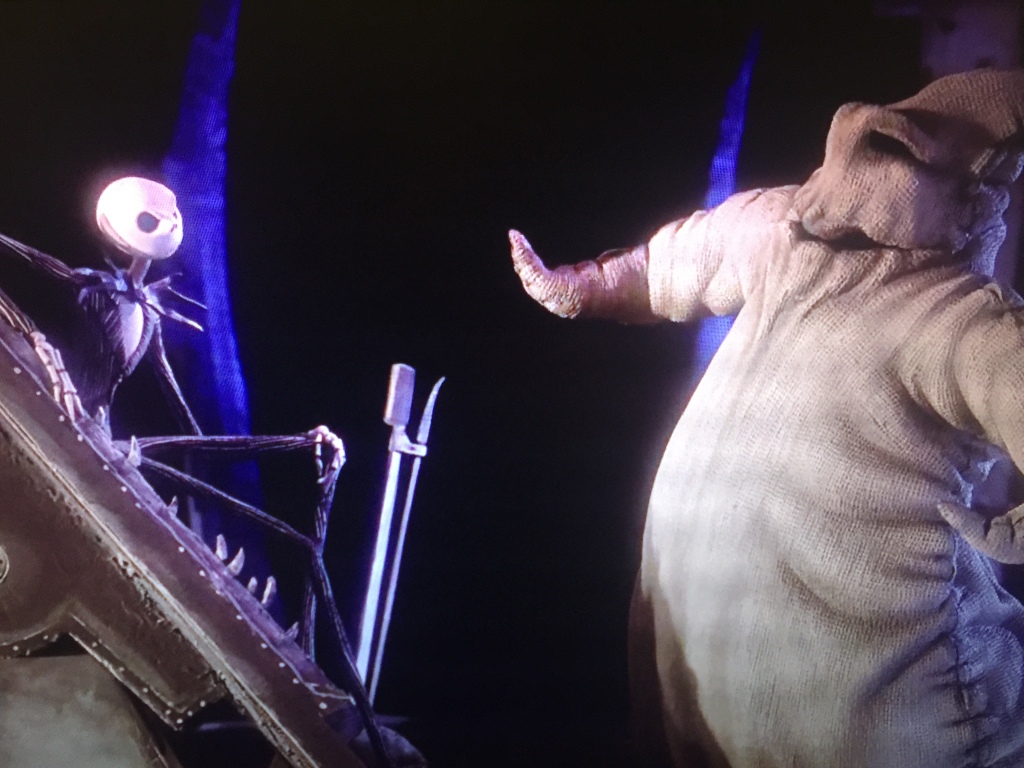 Oogy, this is no time to tell me that if I liked it I should have put a ring on it.

Production, however, stalled early on as Disney felt that it might be too weird or scary for kids to enjoy. Eventually, this ended in 1984 when Burton was fired from the studio. He went on to make the hugely successful films Beetlejuice and Batman. Years passed but Burton frequently thought of the project until he finally decided to return to it, only to find that Disney still owned the rights. An agreement was reached with Disney and Selick, who would direct the film, but for now was only signed on as a producer. Burton originally approached his Beetlejuice collaborator Michael McDowell to do the project but their creative difference led to McDowell leaving the project as Burton decided to make the movie into a musical, enlisting the help of long time collaborator, Danny Elfman. 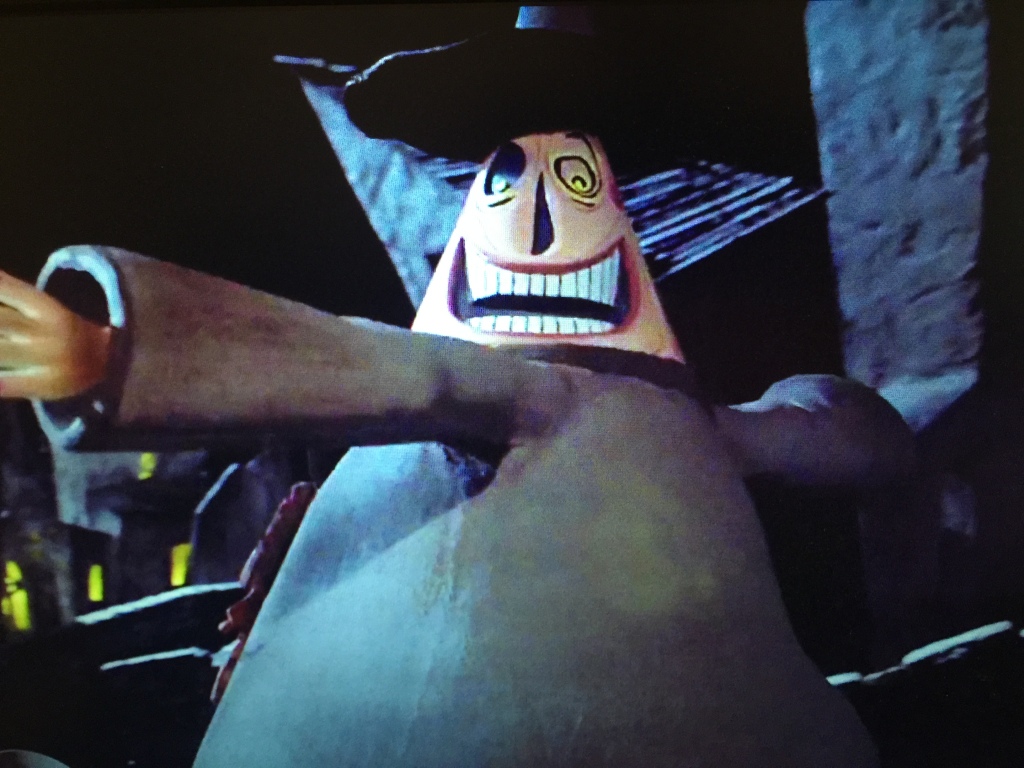 It’s interesting that Tim Burton is so closely tied to this film as he was largely not involved in its making. The idea was his but Selick directed the film, Elfman wrote the music, and Caroline Thompson wrote the script. Burton was busy working on Batman Returns for most of the production of Nightmare. In fact, in an interview, Selick mentioned that Burton only came to San Franciso, where the film was in production five times over two years and only stayed a few days when he did. 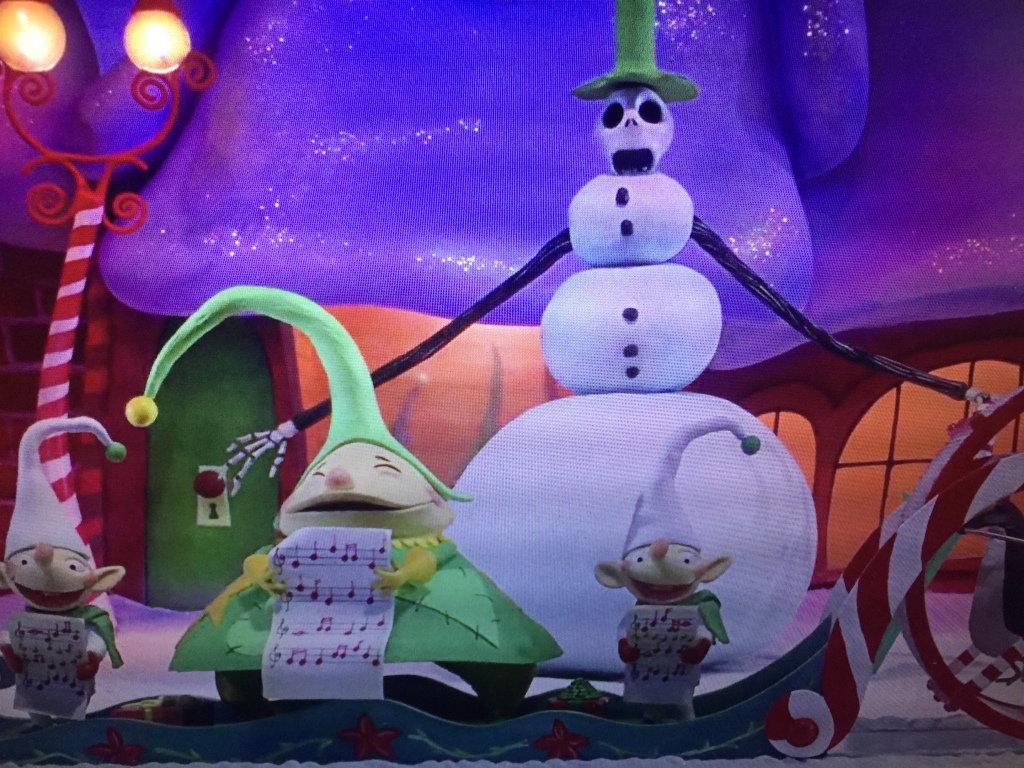 Don’t mind me. I’m just taking all the credit.

As for the animation, the grueling task of stop motion and claymation involved 227 puppets of characters in the movie. Jack himself had nearly four hundred different heads in order to capture all of his facial expressions. At one point, 20 different stages were being used for the motion capture and in total, 109,440 frames were taken to complete the film. Sounds like a lot of work, and I’m so glad they took the time to do it. 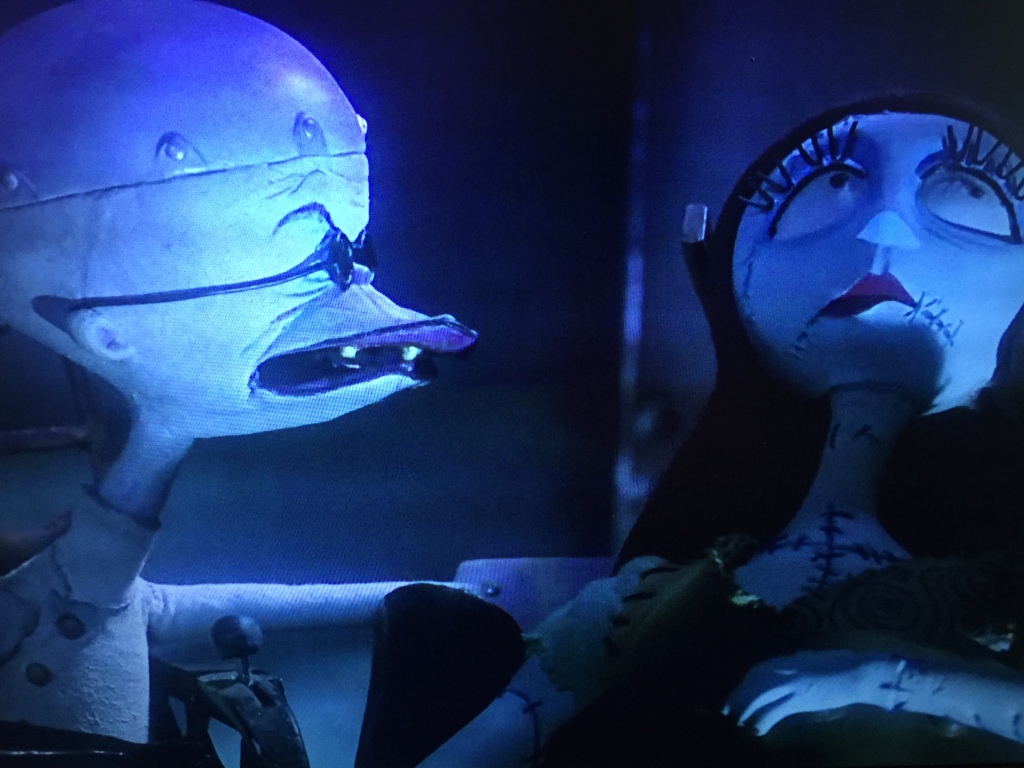 Will someone take off her uncomfortable face and put on a happy one? Sheesh.

The Nightmare Before Christmas tells the story of Jack the Pumpkin King, lord and ruler of Halloween Town, the birthplace of all frights and scares which haunt us every October 31st. That’s just the thing though, after doing the same thing every year, he’s grown tired of his lot in life and hungers for something new and magical. It is through this search that while wandering through the woods, he happens upon the entrance to all Holiday worlds and falls face first into Christmas Town where he becomes enamored with the idea of Christmas, so much so that he eventually ends up deciding to take over the holiday for a year and give it a try. Of course, being that everyone he knows only understands scares and spooks, this goes less desirable than planned. At its core, Nightmare is all about appreciating what we have and knowing what we are good at and letting others be good at what they do best. It’s a film about gratitude and that’s a pretty good lesson for any holiday. 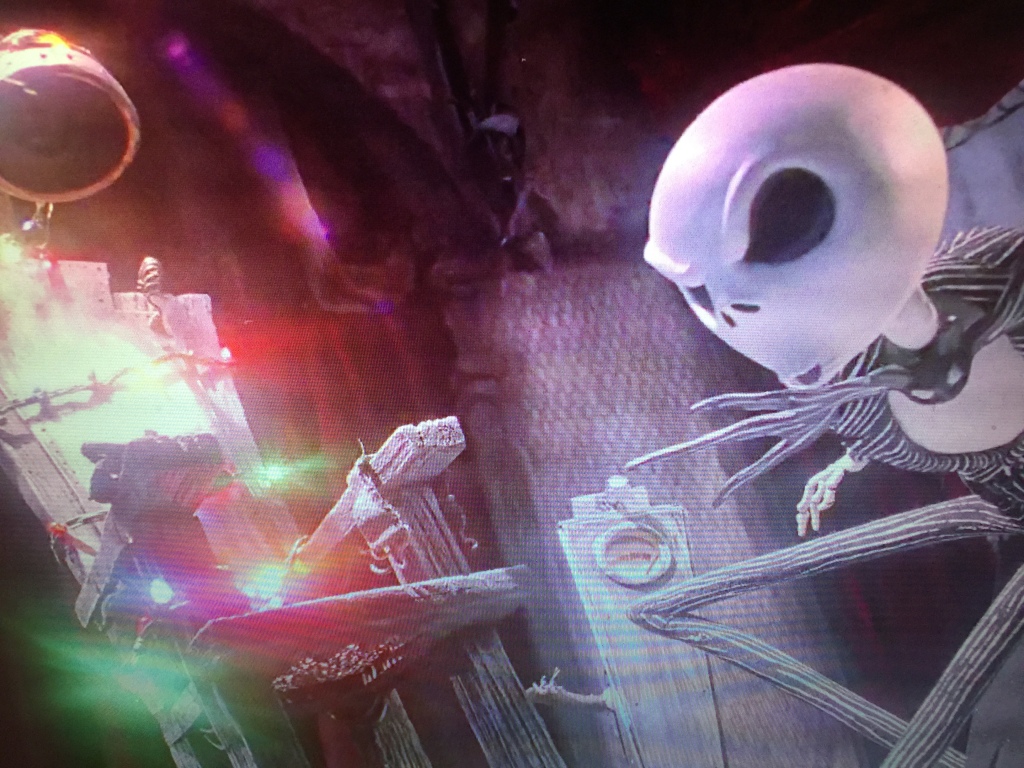 The world is absolutely brilliant. I like that it gives kids the creepy vibes and doesn’t really hold back. That’s what made Goosebumps such a hit as well as Bunnicula. As a kid, I remember loving scary stories but the trouble with hollywood is that they want to soften the blow. They worry that kids can’t handle it. Just the opposite is true. Kids LOVE this stuff. Look at Harry Potter! Look at Courage the Cowardly Dog! What works for Nightmare is that it is constantly finding new and creative ways to be creepy. From heads falling off to monsters under beds to little bullet holes on toy ducks, it never feels like it’s holding back for the sake of the children, and that is a good thing. 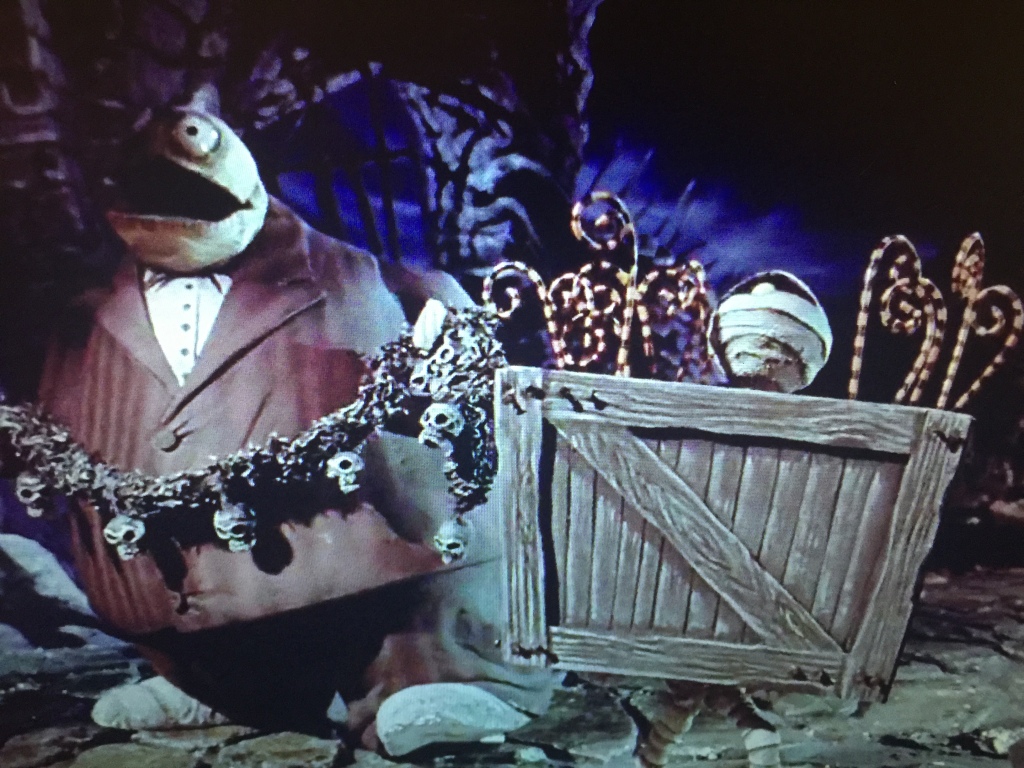 I’d like none of these things for Christmas, thank you.

The characters really stand out in this film. Jack is a stellar lead character because unlike many Disney heroes we’ve seen so far who are fairly perfect but cast down on by the world, Jack is extremely flawed. All the bad things that happen to him are typically his fault and he constantly fails to see the error of his ways. This is great though because when he finally realizes that he isn’t meant to be Sandy Claws, and is indeed empowered by the fact that he rules Halloween, we get to see him overcome these faults. I also love the way he moves and the fact that he’s so skinny. It gives him an aesthetic that is very memorable and is a big reason he has become something of an icon this time of year. 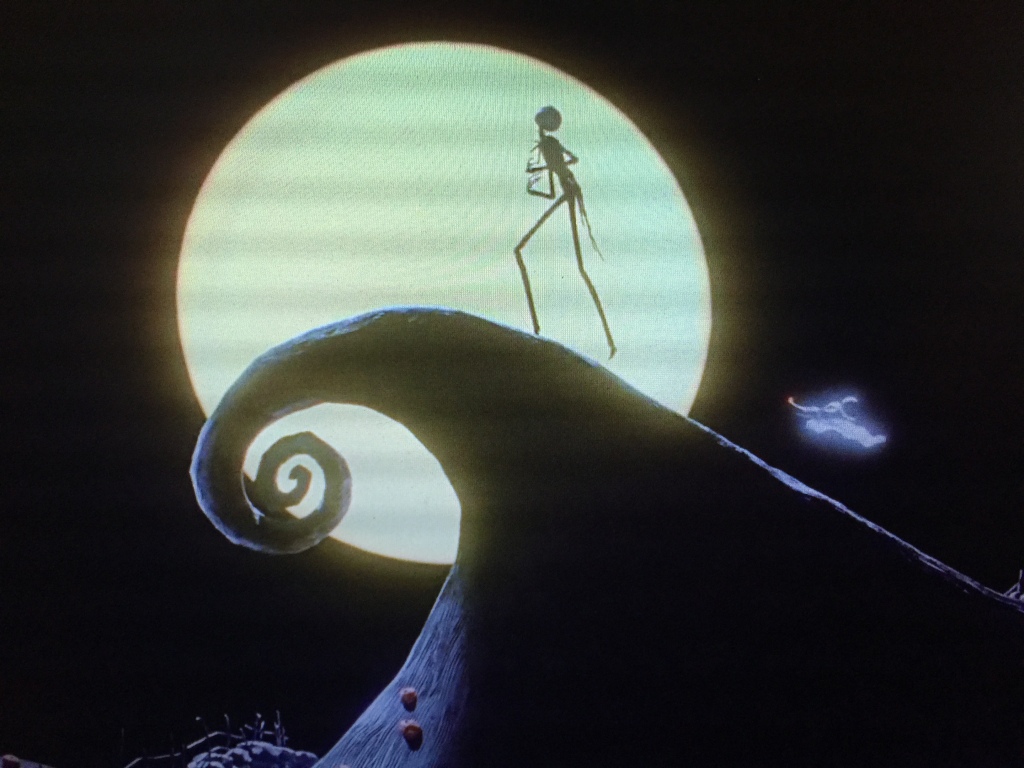 Other characters don’t stand out quite as much but are still fun. From the creepy Doctor Finklesteen to his creation, and Jack’s love interest, Sally, to the Mayor who switches his faces depending on whether or not he is happy or worried to the trick-or-treat kids, every character, whether or not they are emotionally memorable, manages to look and sound different enough that they stay with us long after. 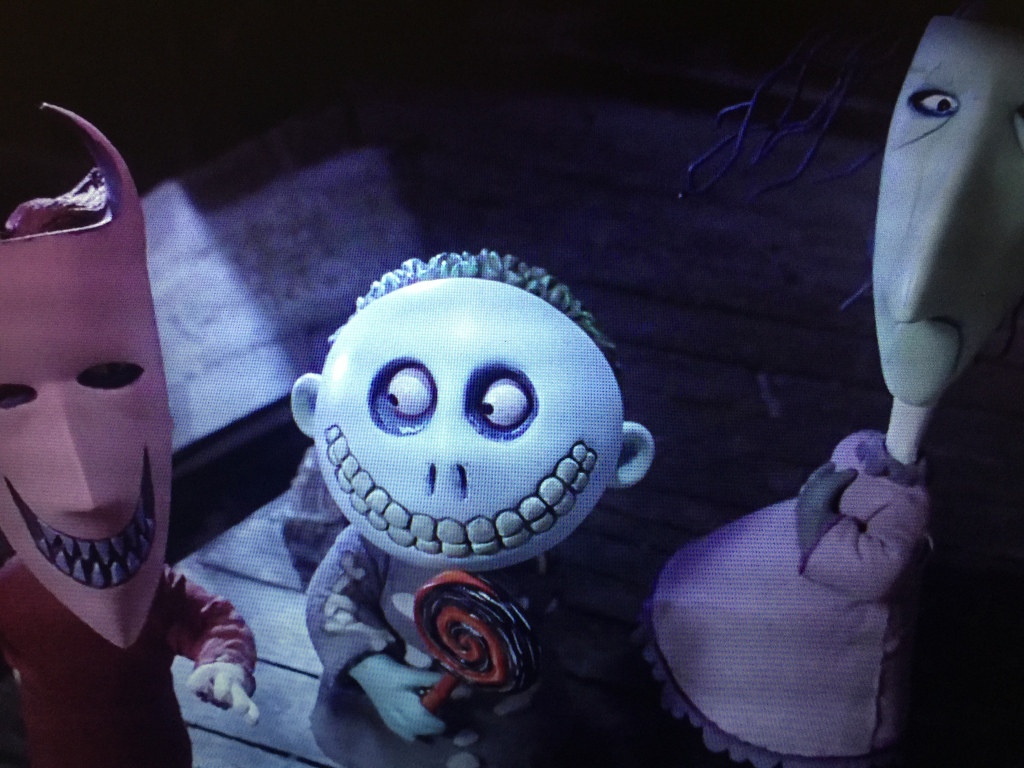 Yeah, these are the guys I would put in charge of kidnapping someone. That’s a GREAT idea.

Sally may be the only part of the film I don’t absolutely love. She just doesn’t do a whole lot. Yes, she’s a love interest and yes she tells Jack that she has seen a horrible vision of the world to come but overall her character feels more like another piece to the world than an actual viable part of the story. I suppose she does help to save Santa…kind of? She is borderline damsel in distress and it just didn’t do it for me. Also, and this is just me, I’m not a big fan of her singing voice. Every time she sings, I just want to fast forward. Yikes. 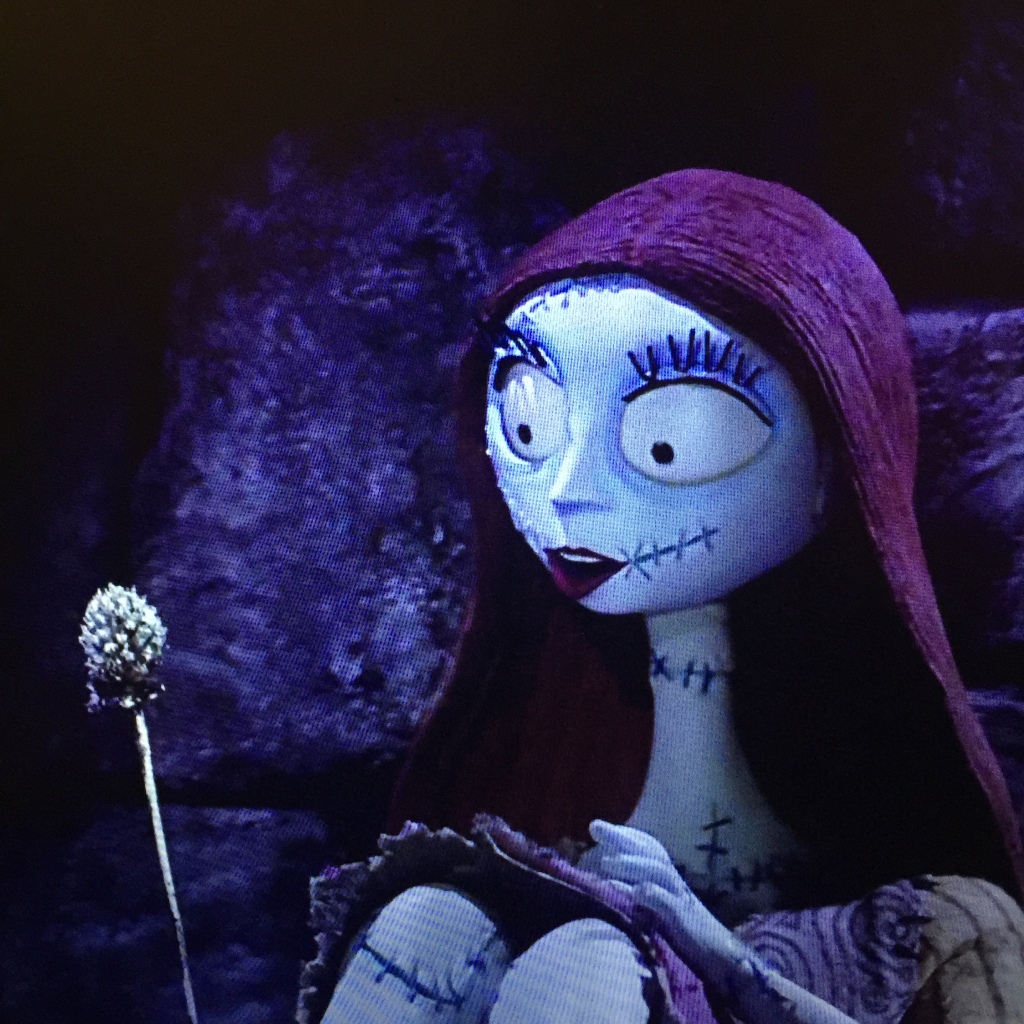 Consult your doctor if you have visions of plants turning into Christmas trees and then burning. Your prescription may be off.

Oogy Boogy is a terrific villain. It takes something special to be scarier than the king of Christmas town but someone who is basically a potato sack full of bugs, who delights in torturing Santa is definitely the guy we are looking for. He’s wonderfully crazy and I love the theme of him gambling. It fits with the idea of characters like Two Face who “leave it to fate” whether or not they’ll kill someone, but obviously they’re going to kill someone in the end. He also has one of the best songs in the film and one of the most terrifying scenes as his outer shell unravels to reveal the insects inside. Gross!!!! 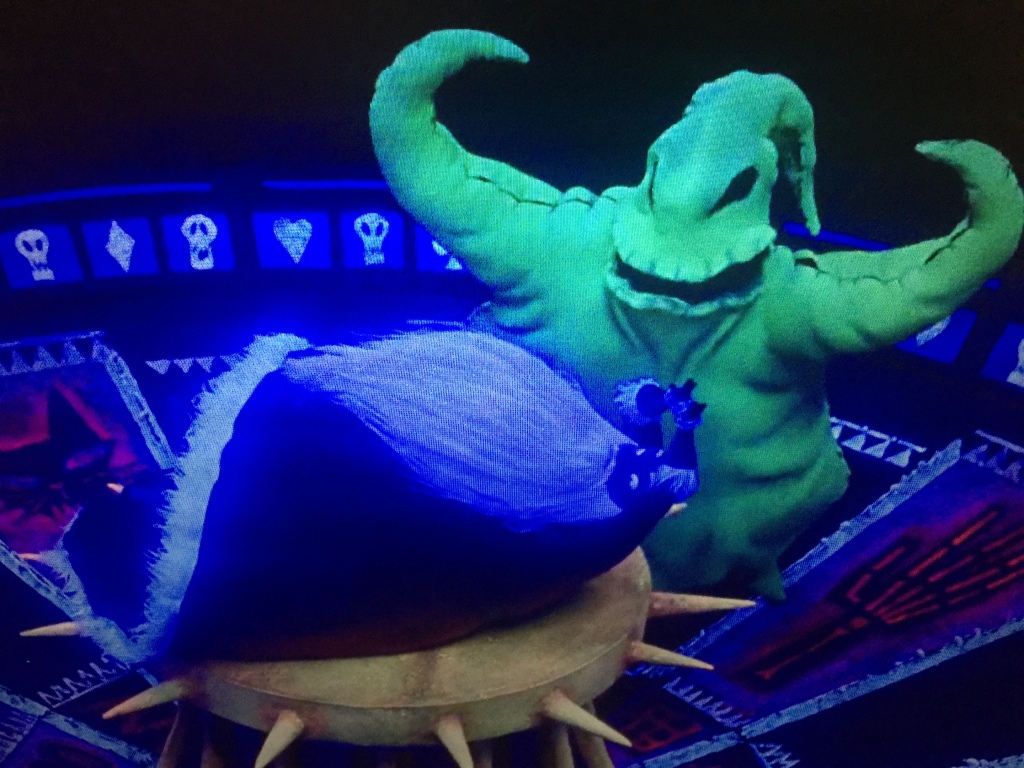 It would be an absolute crime to not talk about the soundtrack of this film. The music is amazing. From the fantastic intro of “This is Halloween” to Jack’s fast paced romp through Christmas Town with “What’s This?” to my all time favorite of “Kidnap the Sandy Claws,” this is a musical done right. Every song pops and gets stuck in your head and has a great unique feel to it. It feels very Disney, even though much of the film breaks the general Disney rules. Danny Elfman masterfully sings the part of Jack and the animation always makes the music soar even more with fantastic imagery that sends shivers down our spines. 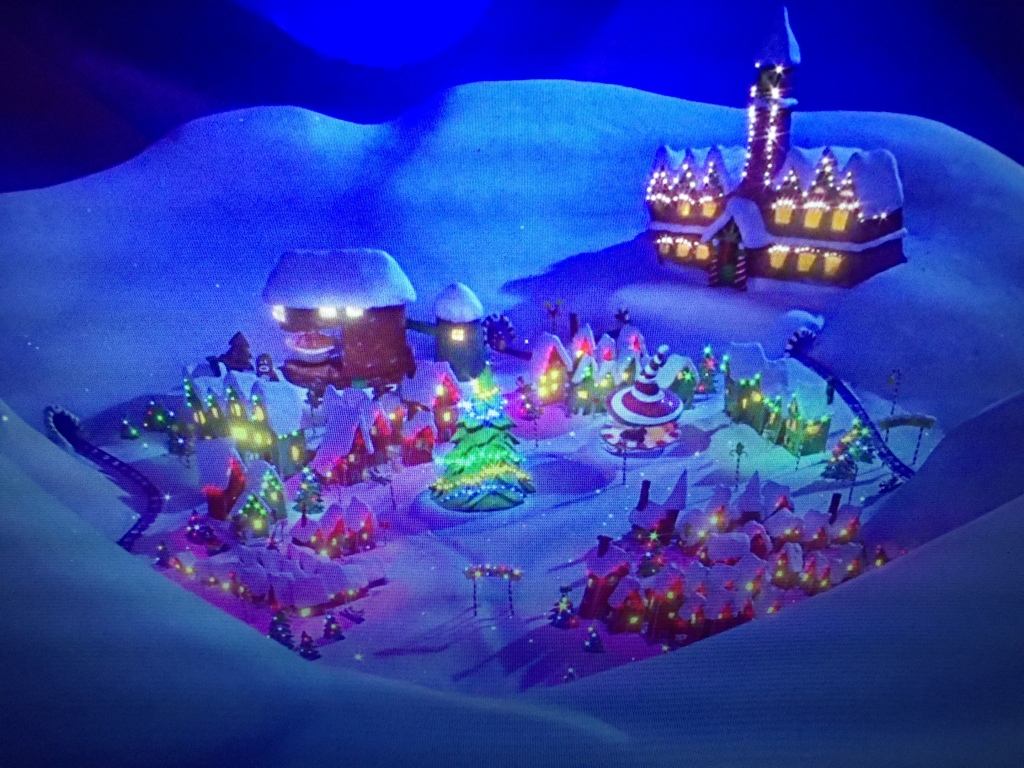 The Nightmare Before Christmas is damn near perfect in my book. The music is wonderful. The characters grow throughout the film and are delightfully unique and the world is unlike anything else out there. The film’s look is so memorable that often times it feels that Tim Burton is copying the style in his other films of this one. There is a reason Nightmare has become so iconic. It has earned its place as a classic and one of, if not, the best Halloween movie out there. Let’s face it, its only real competition is Hocus Pocus. 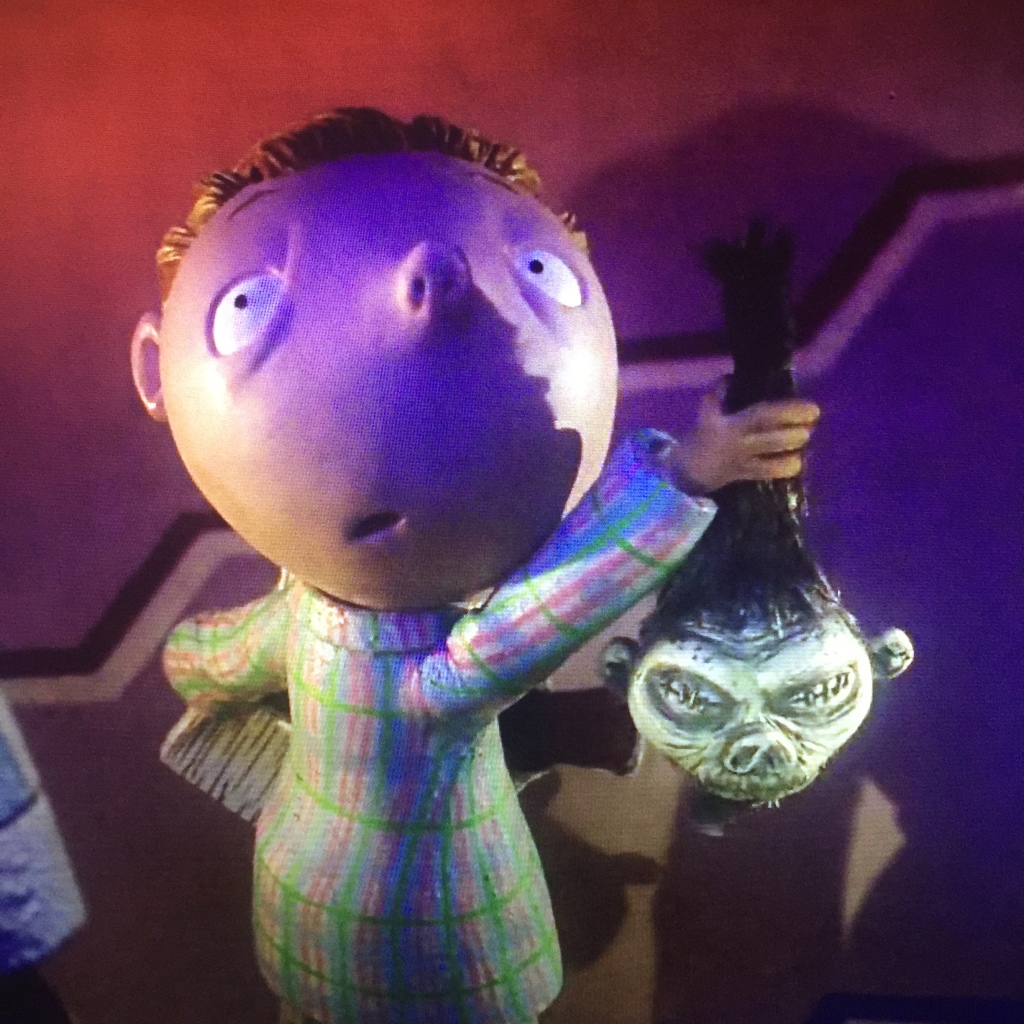 Hocus Pocus doesn’t have this kid pulling this head out of that box.

Now go out my ghosts and goblins. Eat lots of candy and have a hauntingly good time. Stay safe and remember all the work that goes into this fine holiday. Someone tromped through the pumpkin patch to make it happen. Don’t let their sacrifice have been in vein! 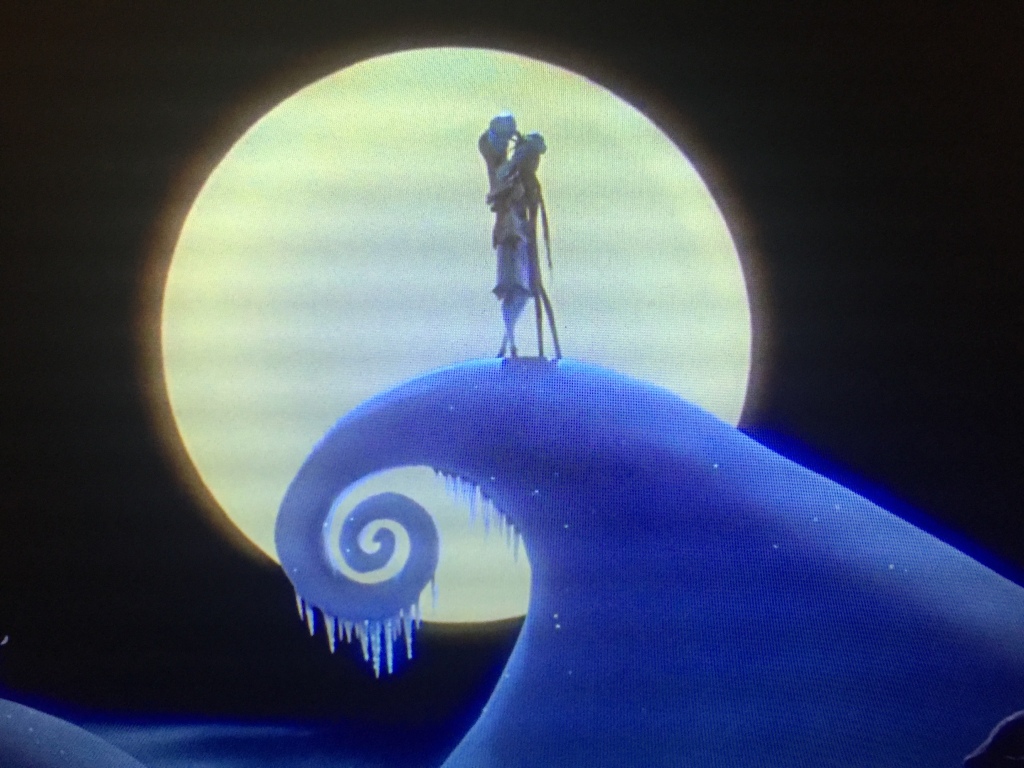 And make sure to kiss someone under the moon at the witching hour.

And just for fun, here is a link to last year’s Halloween article.  My how this blog has changed…