If you’ve been reading this series for a while now, this won’t be the first time you’ve heard me mention the phrase: Every Disney movie is someone’s favorite Disney movie. I didn’t know what to expect when I sat down to watch the twentieth film in our series, and the last to have Walt’s official blessing, even though he was not greatly involved in production. I knew the song “Ev’rybody Wants to be a Cat” because, well, who doesn’t know this song. I knew that this would be one of the films so far that I’d never seen, so there were sure to be surprises. What I didn’t know was that the surprise would be that this film would end up being one of my very least favorites so far. Though there are moments of greatness, The Aristocats proves that all the right pieces can sometimes not fit together quite so perfectly.

If the large dog is bad ideas and the small dog is good ideas, you get a pretty accurate metaphorical image of this film.

The first thing that strikes me as very odd about this film is the lack of history. While doing this series, I’ve found myself time and time again having to pick and choose what to talk about just to make sure that the article isn’t twenty pages long, but when I went to start my research of Aristocats, I came up pretty short. I can tell you that there were some notable voice actors, one such being Sterling Holloway, voice of the Cheshire Cat, Winnie the Pooh and Kaa too. Phil Harris, voice of Baloo, voiced Thomas O’Malley, the alley cat version of Baloo. I can tell you that the film was financially a success at the box office. I can tell you that a full feature sequel was planned but never released. But you guys, that’s about it. I don’t really know what to do here. I feel itchy and confused by lack of study materials. Up is down and left is right. I guess, we’ll just…move on? Yes, yes, that’s what we’ll do. Okay, deep breaths. I am now, two paragraphs in, ending the history portion of this article. 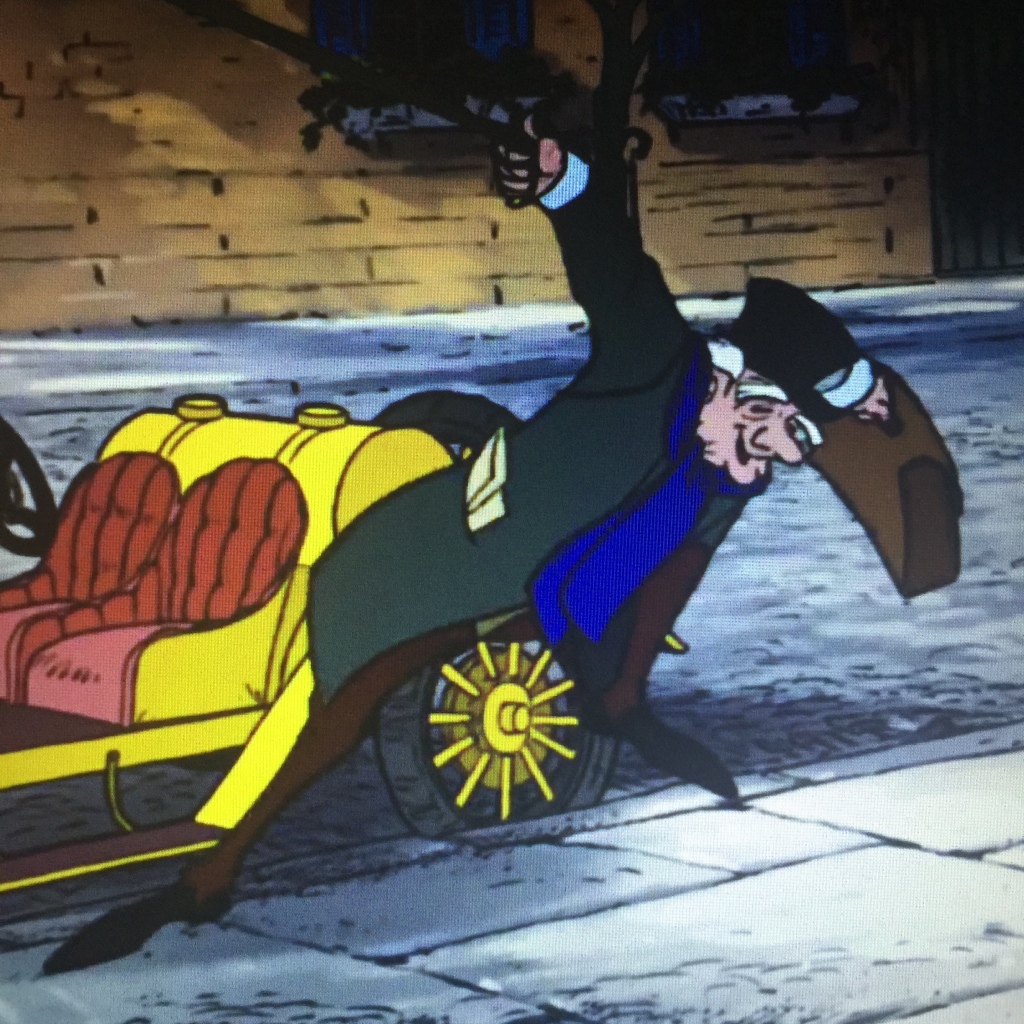 Maybe I’ll use the pictures to show what the good parts one. For example, here we have an old man who can’t stay standing. Hilarious…right?

Are you still there? All limbs in tact? Let’s just get through this together shall we? The Aristocats is sort of like Lady and the Tramp meets 101 Dalmatians in Paris with cats. Madame Adelaide is by all accounts a crazy cat lady. She owns a lovely cat, Dutchess, and her three kittens, Toulouse, Marie and Berlioz. Apparently Disney studios googled “French Names” and took the first three that popped up. Madame Adelaide is such a kook in fact that she decides to leave her estate to her cats. When her butler, Edgar, finds out, he decides to drug the cats and lose them in the country side. Oh boy, where to start.

Where do the cats end and the crazy begin?

I think I’m going to hit things off with our villain. I usually wait until later to get into villainous deeds but up is down today so here we go. Edgar is a very odd villain. From the start, he seems delightful. He’s kind and caring and even helps the old Georges Hautecourt up the stairs. This is a stand up gentleman, until of course money is involved. His turn to villainy is so quick and sudden that I found myself confused. His plan is also pretty crazy. Put the cats to sleep. Lose them in the countryside. There has to be a better way. He really is the poor man’s version of Cruella and he just never really seemed to pose much of a threat. He’s presented as such a hot mess and a dopey one at that, I found myself craving for a villain with some real evil.

Ironically, the thing he’s missing from this evil laugh moment is a cat on his knee.

The cats are cute. I’ll give them that. Dutchess is rather obnoxious with her sultry voice, but the kittens, who are quite civilized as they know how to play piano and sing, are always so adorable. I think Marie was my favorite. Although Toulouse was also pretty fantastic. The kittens are one of the absolute high points of the film. 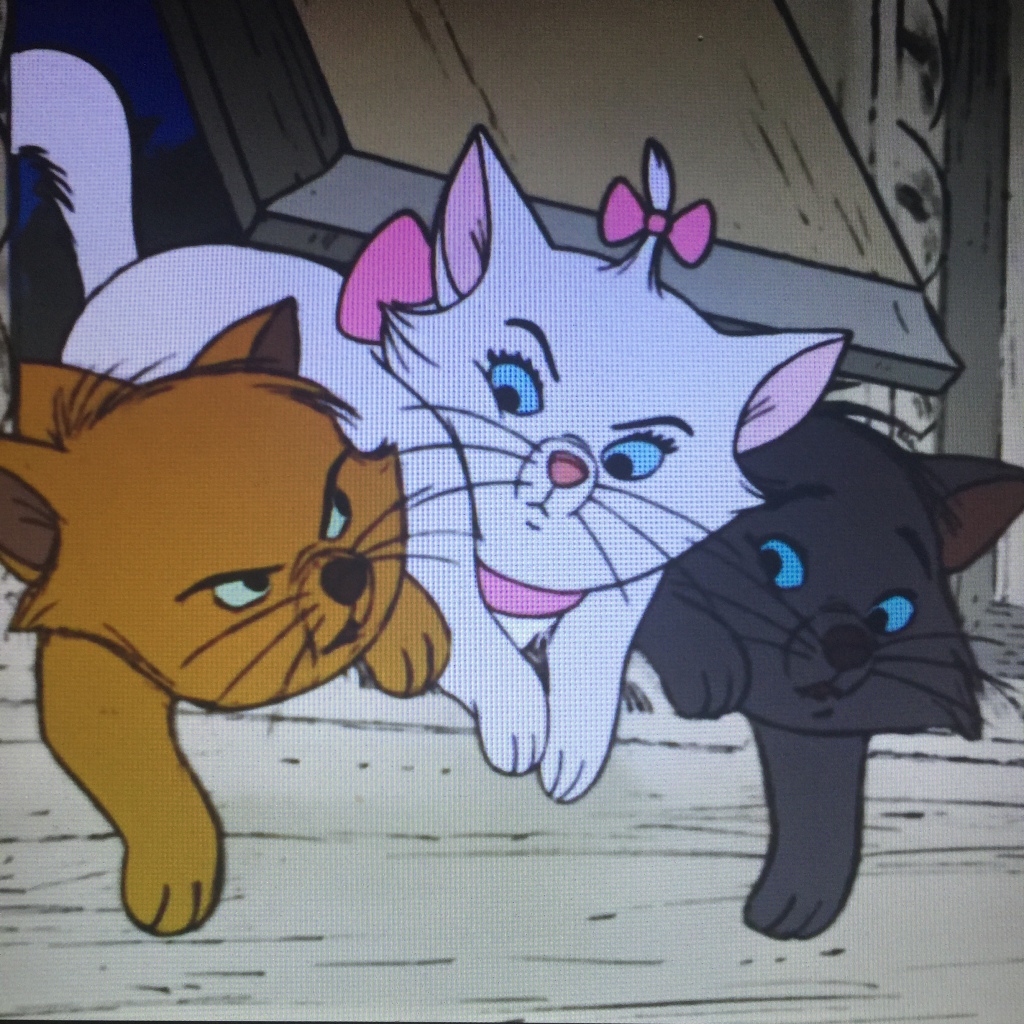 SO CUUUUUTE!!! Oh right, where were we?

Thomas O’Malley is definitely a fun character but had me wishing we hadn’t just watched The Jungle Book because he was SO similar to Baloo that nothing about him felt authentic or fresh. I wanted something new. I wanted something different. Yet here again, I found that we were being shown a rehash. He has the ideals of Tramp, thinking that humans are bad to animals and the free spirit, not to mention voice, of Baloo. I like that he’s noble and cares for the kids and he’s a pretty compelling male lead. But why do adult men in Disney films have to all be huge womanizers? It seems that all the boys are just players until the right girl comes along. I don’t hate that storyline but we’ve seen it all before. We’ve been there Disney. We’ve done that.

The absolute worst part of this film, and I do mean the worst, are two geese by the names Abigail and Amelia Gabble. Why are these two in the film? I mean really tell me. Perhaps they were in the original book, by Tom McGowan and Tom Rowe. But even if that is the case, when has Disney ever not cut something out from the original for the sake of story. Abigail and Amelia are not only not funny, even though they think they are, they are also a big waste of time. They add nothing to the story and are basically a big filler episode in the center of the movie. Their scenes could easily have been cut and their finale piece, which involves them meeting up with Uncle Waldo, a drunk goose, in Paris is not only pointless but also has us laughing at an animal who is so drunk that he cannot even stand up. It’s the lowest I’ve ever seen Disney stoop for a joke and it wasn’t worth it. 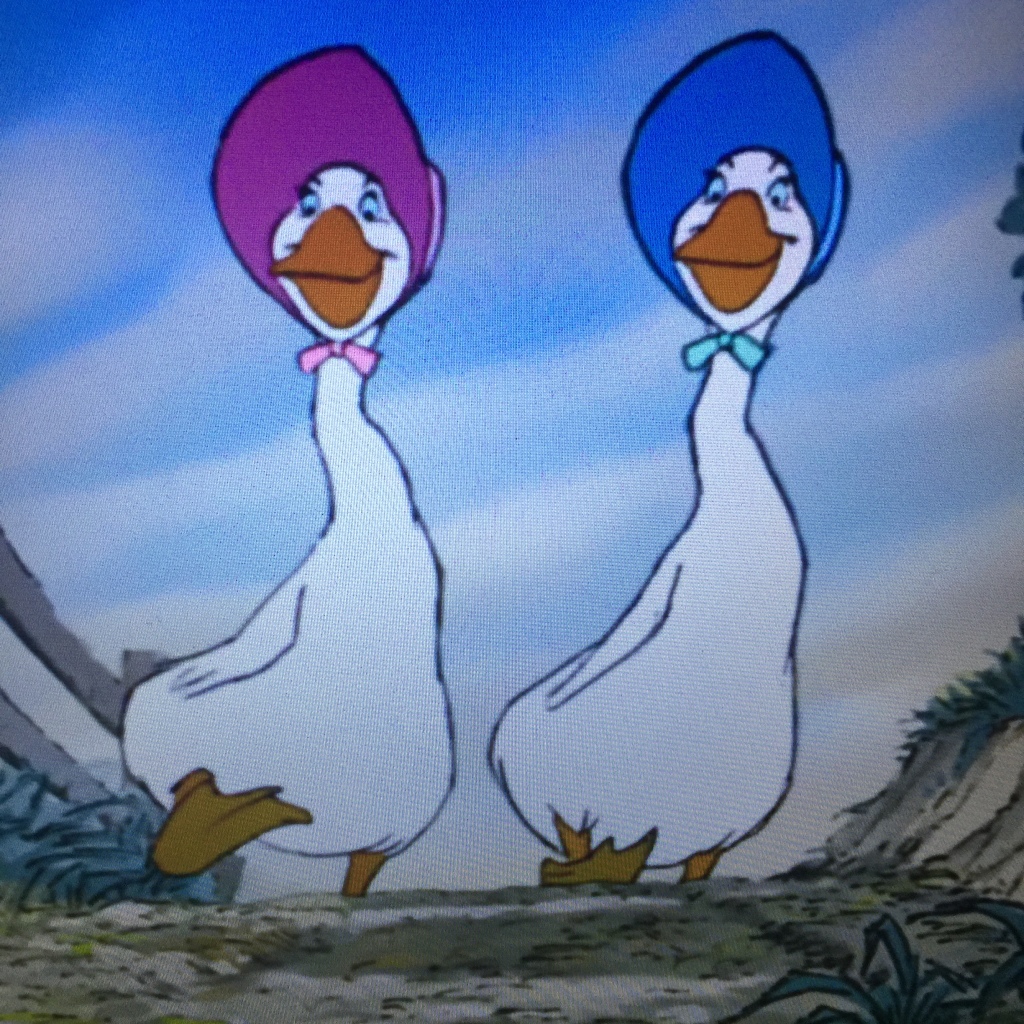 I have mixed feelings on the two dogs in this film which act as hillbilly type characters out in the countryside. Lafayette and Napoleon are probably offensive on some level but the simple fact remains that they provide some of the funniest and most lively scenes of the film and I often wondered if I’d prefer a film about them and only them. They are a simple pair, wanting only for hats to wear and nice places to sleep and their chase scene with Edgar proves to be one of the most entertaining parts of the whole show.

And to your left, you’ll see one of the only engaging moments of the film. Take it in folks, they’re few and far between.

Ev’rybody Wants to be a Cat is the absolute high point of the film. It is a wonderfully catchy song that gets stuck in your head and knowing the song, I even found myself getting excited as the band started up when we first find them in the dead of night. That being said, each of the cats in the band being based on a different nationality and basically being a big stereotype of that country was once again a bit tiring.

Quick, play something, anything. We’re losing them!

My fiancee, Carl, who is Chinese, and I both dropped our mouths as the Siamese cat sang the lyric “Shanghai, Hong Kong, Egg Foo Yong, Fortune Cookie Always Wrong” as he played the piano with chopsticks. Someone approved that line. Someone read that line and didn’t bother to mention how sort of disgusting it is. I feel like “Sign of the times” is an excuse that can only go so far as each of these cats has a line that borders on the stereotypes in this one.

Someone needs to be fired for this. So help me.

Okay, let’s shake it off. We have to end on a positive note. I refuse to think this movie is all bad. In fact, I don’t think it’s all bad. The last twenty minutes is fun and fast and I like the way that the cats get the better of our little butler by sending him off to Timbuktu. I also love that our crazy cat lady creates a home for even more cats. I even love the relationship between Thomas and Duchess because Thomas’ adoration for Duchess also extends to her children and I find that to be pretty special as it shows that deep down he not only has heart but also a lot of integrity.

Cats never stay still when you want to take a decent picture of them.

I think it’s pretty clear to say that The Aristocats was a big miss for me. While I think it has its high points, there is about an hour of time wasting fluff here and only about 20 minutes of good solid story that deserves to be told. I think the animation is great and fluid, but the script and choices which were made on the structure manage to pull the film down like a large anchor. Maybe The Aristocats is someone’s favorite and if it’s yours I would love to talk to you. No, really. Tell me what is so wonderful about this movie and why it is so beloved. I want to see it, I just don’t. I feel the weight of Walt’s absence and only hope that we move up from here, which I’m sure sooner or later, we will.

Everyone is smiling because the film is finally over.

Next Up: Robin Hood