Our Trip to Hogwarts Part 4 – The Forbidden Gringotts Dragon Hippogriff

Hello and welcome back all you wizards, witches and muggles. So far in our little series, we’ve discussed the park as a whole, making butterbeer and casting spells with your fanciful wand. Today we end Our Trip to Hogwarts series on a high note because today we talk about the outstanding rides that await you at Wizarding World. It’s important to note that as a child, I rarely went to theme parks and had never been on any sort of 3D thrill ride before our trip to Universal Studios so all of this seemed even more fresh and amazing. There’s a good range of rides to enjoy in the park, five in total if you count the Hogwarts Express which takes you from Diagon Alley to Hogsmeade. Let’s start small and work our way up, shall we?

I just want to touch on the first one, Flight of the Hippogriff, which is a fairly family friendly little roller coaster. It has some lovely scenic views of Hogwarts and you get to see some animatronic hippogriffs lounging around outside of Hagrid’s Hut. It’s not much to see but it is a nice little ride and especially good for you young one’s or anyone who is less excited to be thrilled by their rides. If there’s one to skip though, this is the one.

The first ride we ventured onto was the fantastic Escape from Gringotts, located in Diagon Alley. Upon entering Gringotts, you are met by several animatronic goblins who are busily scribbling away at their legers and look quite real. It’s especially good that they all have unique personalities and looks, rather than being clones of each other. The bank feels alive and the air feels dank and foreboding as you descend the staircase into the banks depths.

The face I usually get when the teller sees my bank account.

Inside, you watch a short setup sequence which uses images projected onto invisible screens to give the impression that the wizards and goblins you are watching are actually there. You then board a large elevator and are told you are descending deep into the mines. In actuality, all of this is a clever ruse to break up the line and also make the wait time seem less awful, and it works quite well.

There is always something to see and some new exciting piece of Harry Potter lore around every corner. In one room, you are stopped to take a picture, so that they may sell it to you later, and as you leave, you see several newspapers on desks with moving pictures of Serius Black. There are also long hallways where shadows of characters can be seen interacting behind closed doors. It all has a great feel and really gets you in the mood. 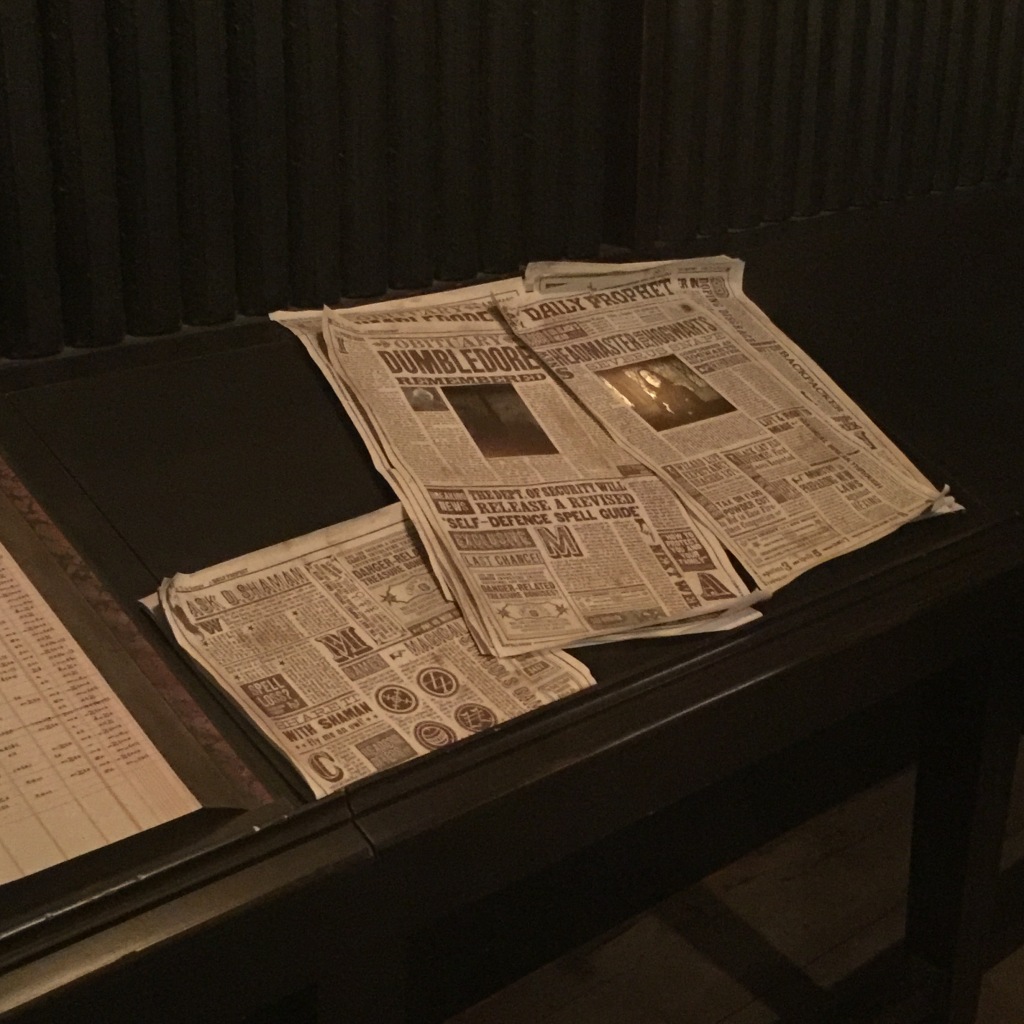 A neat effect makes it appear that the pictures are alive.

All the rides at Universal do something like this but I found the wait lines at Wizarding World to be especially unique. They build a story and get your tension level up so that by the time you get on the ride, you already know why you’re there and what you’re to expect. Deep in the underground you eventually climb some stairs and enter a large room with mine carts meant to fit several passengers slowly proceeding through either side. You are asked to sit in one of them and then it creeps forward. At this point, you are wearing 3D glasses and because this ride is encased inside, you don’t know quite what to expect.

I think to get the full effect of what is about to happen, I need to lay a little ground work. My fiancee Carl is terrified of the falling portion of roller coasters. He can handle any ride without large drops but anything that requires fast plunges downwards is usually out of his wheelhouse. Upon entering the wait line for this ride, we saw a video which showed a bit of the movements the ride would make, spinning from side to side and speeding along, but at no point was a drop shown so we figured we were on the safe side.

An example of such a drop.

Once the mine cart entered the next room, we were treated to a 3D showing which made it appear as if the characters were in the room talking to us. Things seemed fine until one of the goblins exclaimed that Voldemort had broken into the bank and that they must hurry and get the guests to safety. At this point, the entire mine-cart slowly tipped downwards until it was pointing straight into the dark depths beneath us and all I could hear was the sound of Carl screaming. The contraption let go and we were sent speeding downwards into nothingness. Eventually we spun out of the fall and then around a few corners to see Voldemort on the move and Harry, Ron and Hermoine working to help us escape.

It looked so safe from outside.

Some trolls came out to spin the mine-cart and everything was fast and frenzied. At one point Voldemort even took on a large dragon. Since this ride is combining the use of 3D with an actual thrill ride, the tension of escaping feels very real and everything soars by in a way that make you think you might actually be being attacked. Eventually of course, Voldemort leaves, living to fight another day and the mine cart comes back to the entrance, our breaths gone from us. The ride is simply fantastic and we both agreed that it was our favorite ride of the entire park. Its just so fun and fast and feels like a roller coaster but with a story. If you can only do one ride at Wizarding World, this is the one.

This golden fellow greeted us on the way out.

On our second day at Wizarding World, we ventured to Hogsmeade and prepared to take our chances on the Dragon Challenge ride. This is a roller-coaster which requires you to hang as it loops and spins and dives. Carl assured me he would be fine as he had been on the ride before when it was still called the Dueling Dragons. Dragon Challenge is just a re-skin of the old coaster. Basically, there are two sides, a red dragon and a blue dragon and at one point they speed directly at each other to give the feel that you are two separate dragons facing off against each other.

Hmm, this one also looks friendly from afar.

Something to know about this ride is that you are not allowed to bring any bags or have anything in your pockets. We actually tried to keep our cell phones and keys in a zip pocket in Carl’s shorts but we were sent back down the hill as they actually use an electric scanner to check for people doing just that. I will mention though that going up with a cell phone is totally worth it even if you are going to be sent back as one of the parts of the trail provides what I find to be the very best view of Hogwarts in the entire park. See below.

We scaled the hill and found our way to the back end of the red dragon. Only then did it occur to me that I had never been on a roller-coaster of this nature before and I started to panic a bit. Before I could get too worked up, we were launched with the dragon out of the gate. The ride is fast and furious and not for the feint of heart. One of my favorite things about these rides was listening to Carl scream. I know that sounds mean, but I find it hilarious as he has two different screams. There is one scream which he uses as a go to for “Yay! I’m having so much fun!” Then there is the other scream which is much more chaotic and says “Yes, I feel that my life may actually end right here, right now.” The best part is hearing him jump in and out of these screams as the rides go from fast to falling, as that is his least favorite part.

We arrived at the end of the ride victorious and glad to have had the experience. I’m sorry to not have more pictures of this ride but I’ve included and dramatic reenactment of our time on the dragon.

Finally is the ride I mentioned in our very first post in this series, The Forbidden Journey, which takes place inside of Hogwarts. Part of the appeal of this ride really is the wait to get in. I’m totally serious. While waiting to get into the ride itself, you’ll experience the green house, see the sorting hat, the mirror of Erised, several statues from the film and a whole bunch of awesome statues having to do with Hogwarts History. 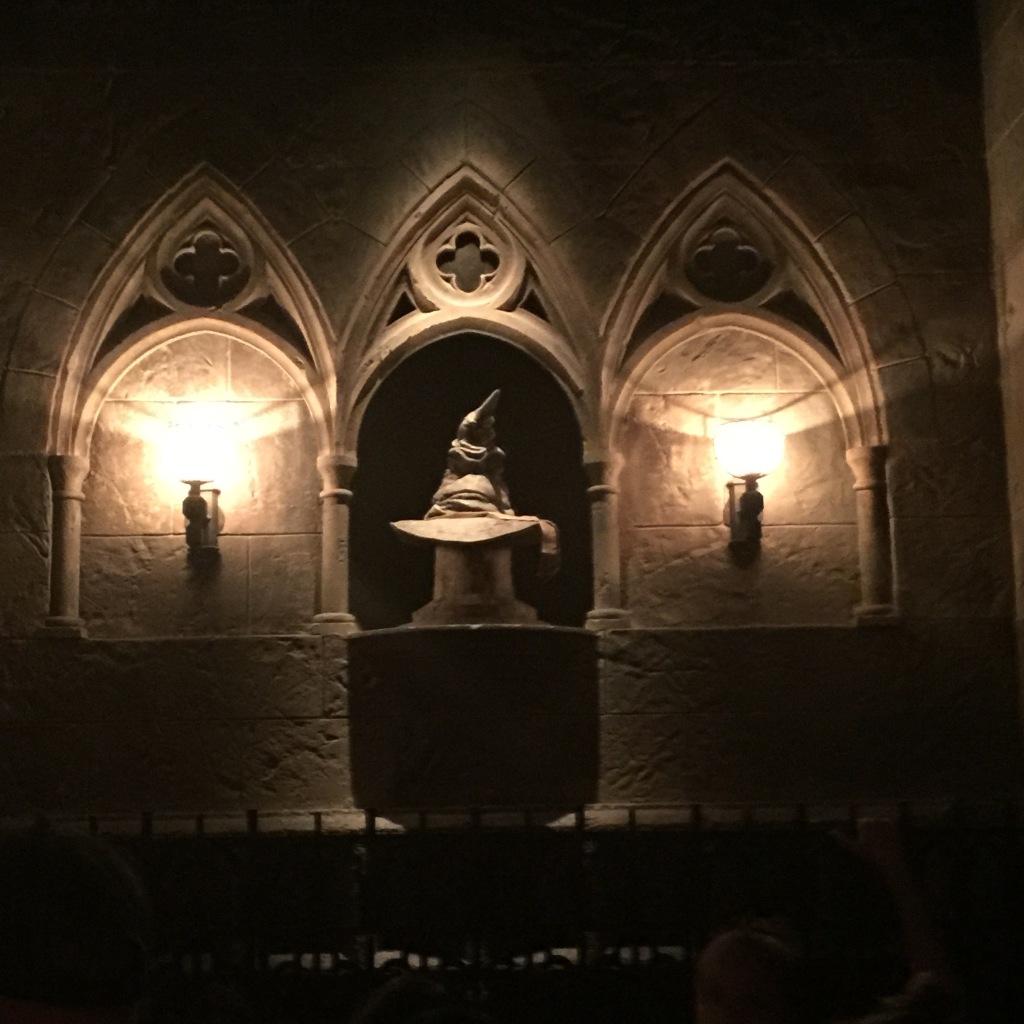 You even get to visit the Defense Against the Dark Arts classroom where you’ll see Harry, Ron and Hermione sneak in using the invisibility cloak and then make it snow, which it actually does down on you from above. 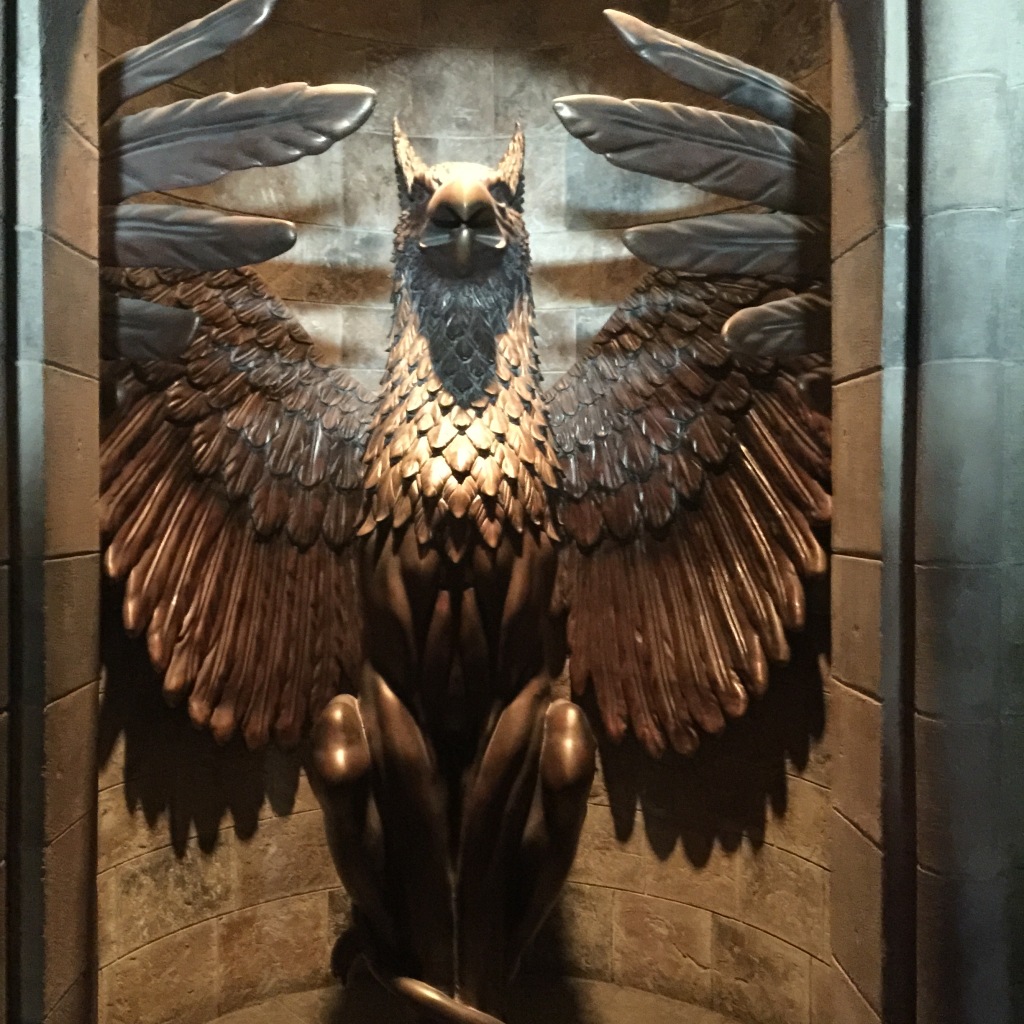 The story of this one goes that Dumbledore has allowed muggles, us, into the school to watch a quidditch match as a means of creating good faith between muggles and wizards. If you know anything about the books, you’ll know this is total crap and would never happen but it plays nicely and its good to see a reason for all of us wandering the halls, even if it is a silly one.

I remember this guy from the first film.

The ride itself makes you feel as though you are flying around the grounds of the school. It combines warped screens which seem 3D without glasses as well as animatronics to form one of the most unique experiences of the park. You’ll be flying in a near 3D plain across the Quidditch field and then you are pulled from that to see a fully animatronized Demeantor or a huge spider attacking you.

Cool statues greet you as you enter.

It’s very fun if not a bit dizzying as you go lunging up and down and side to side throughout the entirety of the ride. This one feels like one of the more tame rides of the park, so if you want an immersive experience but with less of the thrill side, this is a great place to go. We left with smiles on our faces, even though Carl felt a bit nauseous afterwards.

If you look close, you can see Snape being a jerk in the past.

So that about does it. From rides that dazzle to Butterbeer which tastes like liquid happiness to shops and wands and fantastic buildings that make you feel like you’re there, Wizarding World does really have something for every Potter fan, young and old. If you get a chance, I urge you to visit. For me, it was well worth the price of admission to the entire park, and there’s still a whole park to explore after that. Everything is brimming with detail and even after we left I still felt as though there were plenty of nooks and crannies left to explore.

I hope you’ve enjoyed this mini-series. Hopefully I can find a reason to write more about the Potter world in the future, but make sure to stay tuned as there are plenty of fun filled, geek themed adventures still to come.

See you next time!