Well friends, we’ve survived yet another event.  This one was the biggest yet, with eight nine characters to collect, a whole lot of grumpiness, daily rewards, dwarfs, princesses and a whole lot of dwarf hats which all looked the same.  Honestly, I can’t tell any of them apart.  So now it’s time to wrap this thing up.  Let’s welcome a sleepy bum, defeat a Queen, and get her into our Kingdom.  Whaddya say?  Oh?  You’re also dealing with an eggnog induced hangover?  Don’t worry.  We’ll get through this together.

Many of you will have jumped right on Sleepy as soon as he unlocked, but just in case you were SLEEPING on the job (See what I did there?) here are all of his requirements.

Ah yes, the Fish Clarinet.  I recall playing one of these in High School.  No wonder I got made fun of so much.  You’ll notice that Grumpy gets these in a fraction of the time that the other characters do so load up on them ASAP.

Or as I like to call them “Punched in the face for my lunch money” ears hats.  Honestly, they don’t look tired to me, just beaten.  In any case, you’ll find these will drop in 4 hour increments no matter who loads up on them.  Unless, however, you level up Happy to level 3.  Then he can collect these in 2 hours instead.

Pretty soon, Sleepy will drunkenly swagger onto your screen, just as lost as Grandma after her third rum punch on Christmas.  It’s okay Grandma, you can stop talking to the dog now and please take the lampshade off of your head.

Sleepy is going to immediately get you going on the quest to thwart the Evil Queen once and for all.  However, he will also get a quest to do on his own for an hour.  I urge you to wait on that one.

The quest below is not exclusive to the event.  As such, it can wait until you have some spare time later.

You, madame, are underestimating the power of little men!

With Seven Dwarfs and one fairly useless Snow White, it’s time to fight off the Evil Queen at last.  Since each quest is only 4 hours, if you have EVERY character, this will only take 8 hours to do. 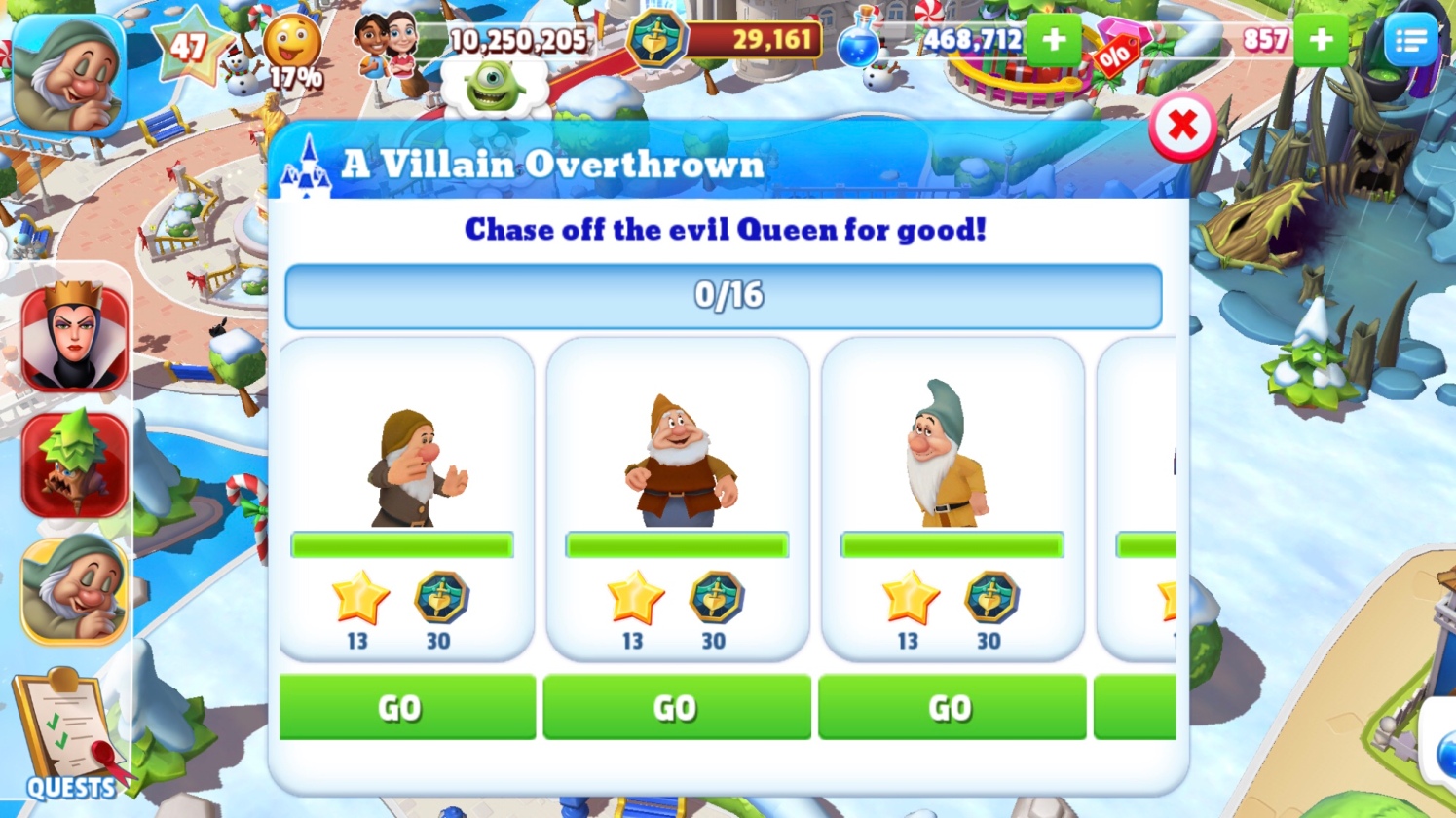 There’s something pretty satisfying about seeing this many characters in a final boss battle of an event.  Oh look, in the back, Snow White is doing NOTHING!!! Ugh.  Go wait by the Christmas tree while the dwarfs handle this.

And only when it’s over does Snow decide to feel bad.  We had EIGHT HOURS of fighting!  Where was your compassion at hour 5!!?? 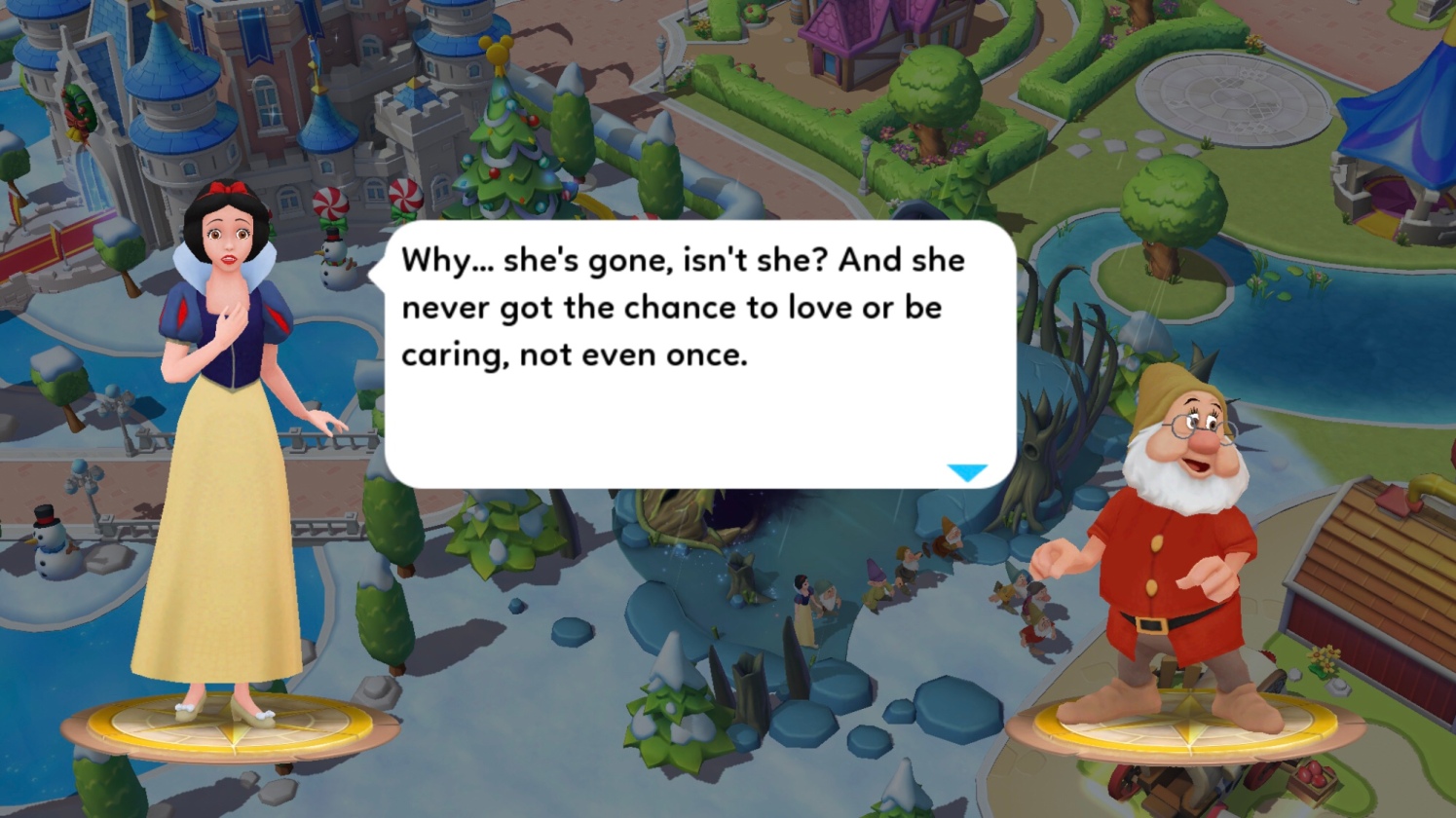 Although she gets over the sadness pretty fast and then it’s party time!

Snow will get a 4 hour quest at the cottage.  She will need to go on this to progress the story.  She’ll also need to seek help as it seems she’s incapable of doing ANYTHING on her own.

Apparently Mickey has spent the last month at the grocery store.  You and me both, brother.  He’s back now, though, and he and Goofy will need to prepare for a Christmas party!

Although it seems that ONLY he and Goofy are invited.  The party will last 4 hours, and then everyone will go home with regrets and Minnie will be totally peeved that she didn’t get an invite.  Donald will add this to his list of grievances centered around Mickey and Goofy leaving him out of things, which will eventually lead up to Season 2 of “Thirteen Reasons Why.” 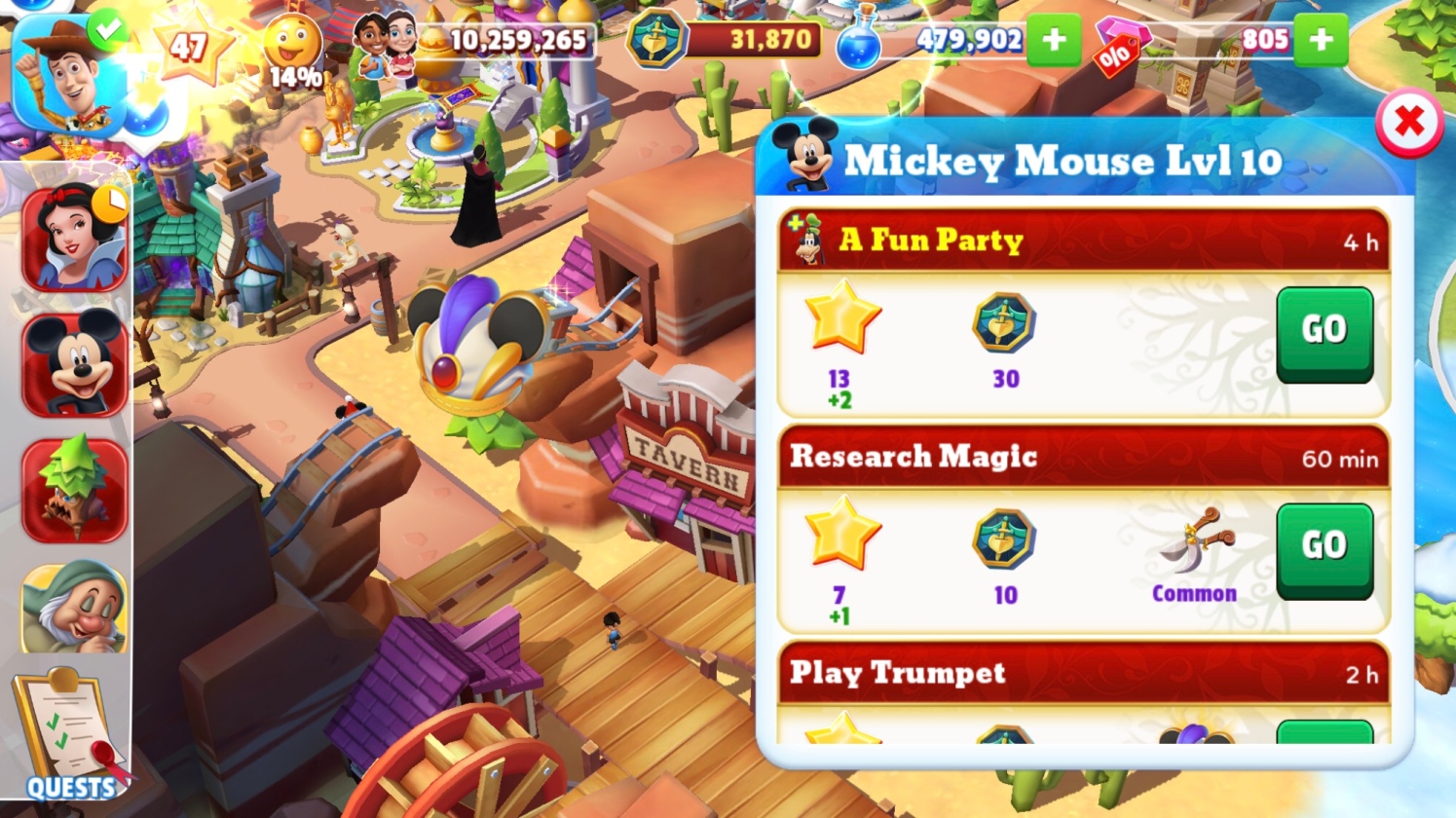 After her four hour quest, Snow will get a SIX hour quest to finish up supper at the cottage. 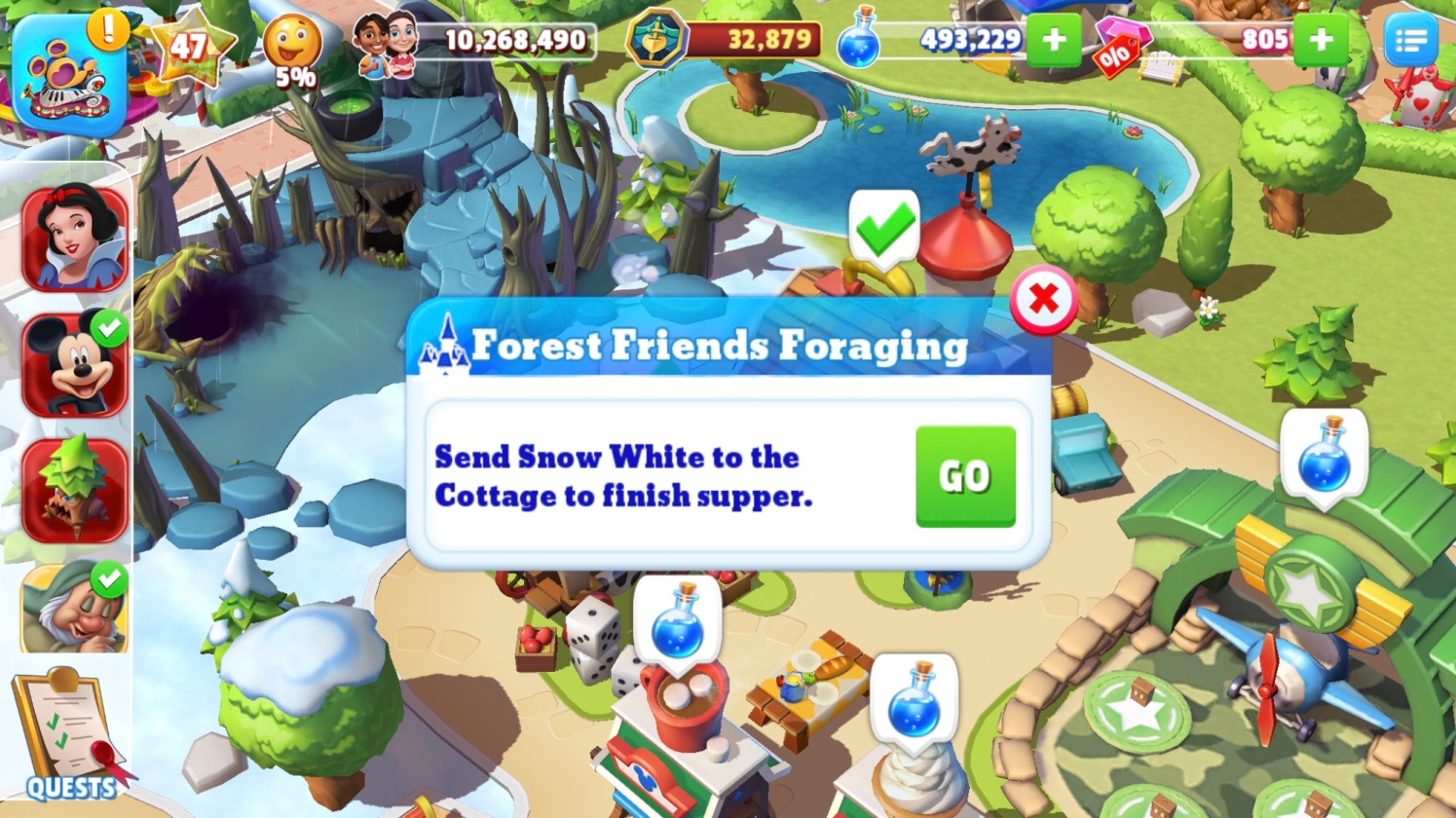 This will be followed up with a one hour quest for Sleepy.  Apparently it takes him that long to just wake up.  Once again, I can relate.

At long last, you’ll be ready to welcome the Queen and complete the event.

If you’ve been saving up Rotten Apples and event currency, you should only need to worry about Heart Boxes and Hats.  That being said, while these quests are not long, the tokens are epic so get to work on her as soon as possible if you hope to have a chance of winning her before the end of the event.

Now, question, does each of these boxes have an actual heart in it?  Because that’s super creepy.  Grumpy is the best bet here, but all the other dwarfs can team up to collect them as well, so don’t get DISHEARTENED, if you don’t have Grumpy yet.  Wink wink.

Oh my goodness, this hat looks absolutely pretentious as all get out.  I imagine this hat should be worn when watching an indie movie in a theater where they serve martinis in Midtown.

And should you not be willing to spend the time, or if you’re running OUT of time, you can always buy the Queen in a nice bundle with some gems and a Candy-Apple Stand, poisonous apples sold separately.

And that’s the end of the event!  I am still working on the Queen, but I feel very confident I’ll get her this week.  How are you all doing and what did you think of the event?  Let me know in the comments below!