Nature is a funny thing.  Winds can blow.  The Earth can shake.  And fire can burn everything down.  But have you ever stopped to wonder if maybe all of that is just angry spirits trying to get us out of their homes?  Spirit Island sure wants you to ask that question.  In truth, Spirit Island was a game that we passed up at Gen Con.  But after seeing it pop up online, I just had to take the plunge.  And oh how glad I am that I did.  Spirit Island is a game that will have you analyzing, pondering and scrutinizing every single move you make.  It’s a game with several moving parts that add up to something grander than I ever imagined.  So sit back and relax as we delve into a game that has sky rocketed to the top of my list of favorites.  And not only because it involves ruthless settler killing sprees. 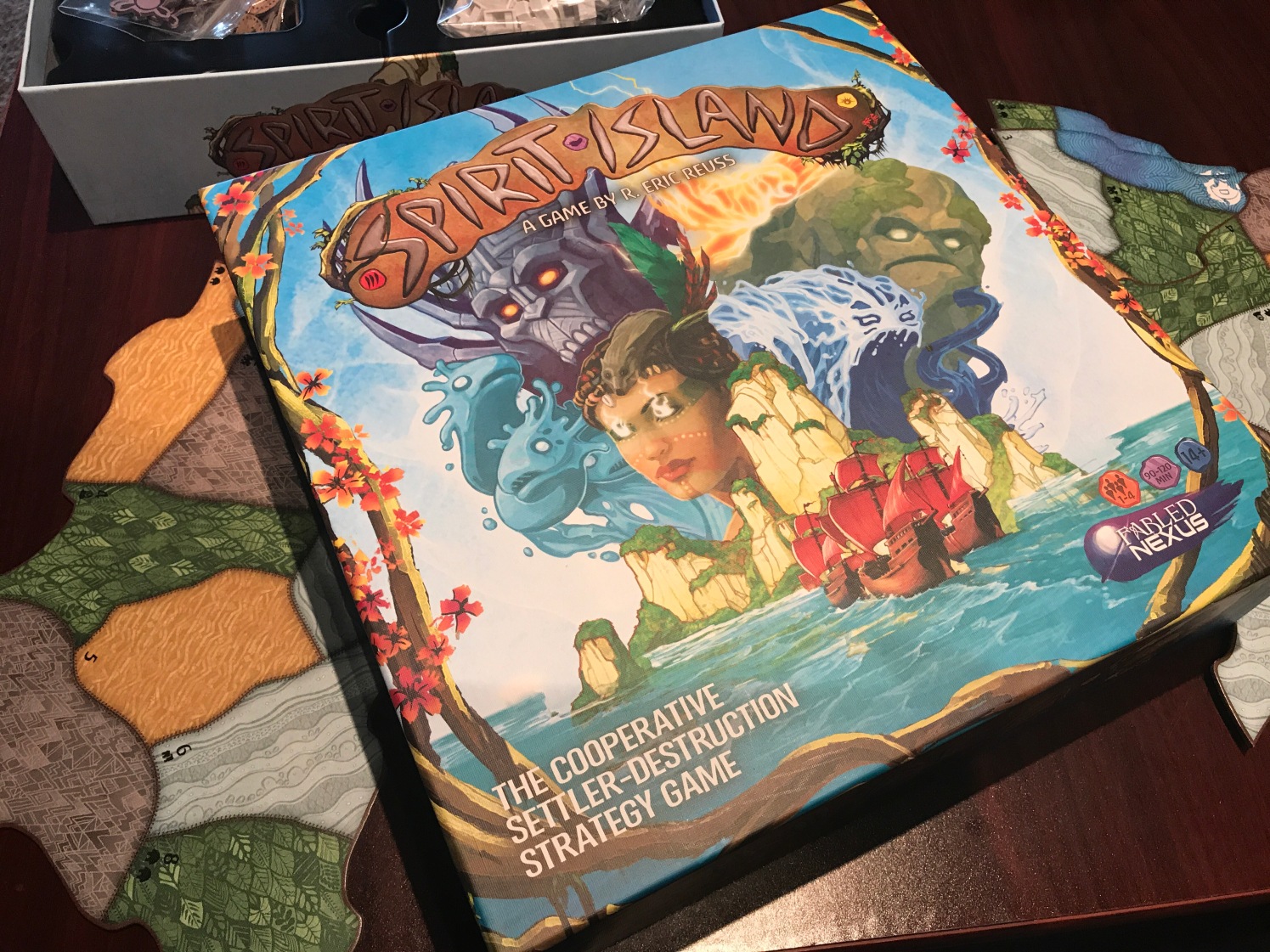 In Spirit Island, you’ll take on the role of spirits who aren’t too happy about a group of settlers moving in, making themselves at home and then proceeding to build towns and cities, all the while murdering your faithful hut-living followers, the Dahan.  Each spirit has unique powers and abilities, but the bulk of your turn will be made up of spreading your spirit essence across the island, destroying and moving invaders and working with other spirits to try and stop the spread of blight.

As a spirit, you don’t directly enter into conflict with the invaders for the most part. On your turn, you’ll be mostly trying to move invaders so that they can be quelled by the Dahan or are out of range of a site where they might explore, build or ravage.  You can do damage to the invaders through the use of power cards, but this is more about area control than it is brute strength, and after you surely get demolished in your first playthrough, you’ll quickly learn that every turn matters as the invaders overwhelm the board quickly and efficiently.

The game is essentially made up of two phases, The Spirit Phase and the Invader Phase.  The Spirit Phase will see you and your friends simultaneously doing actions to gain energy, place essence and buy/play power cards.  Card powers can be either fast or slow.  A fast power will be played before the invaders get their turn, while a slow card will go after, and each has its advantages and draw backs.  Fast cards might help you run off an invader before they scorch the land, but slow cards allow you to make tactical use of information you found out after the invaders have spread. 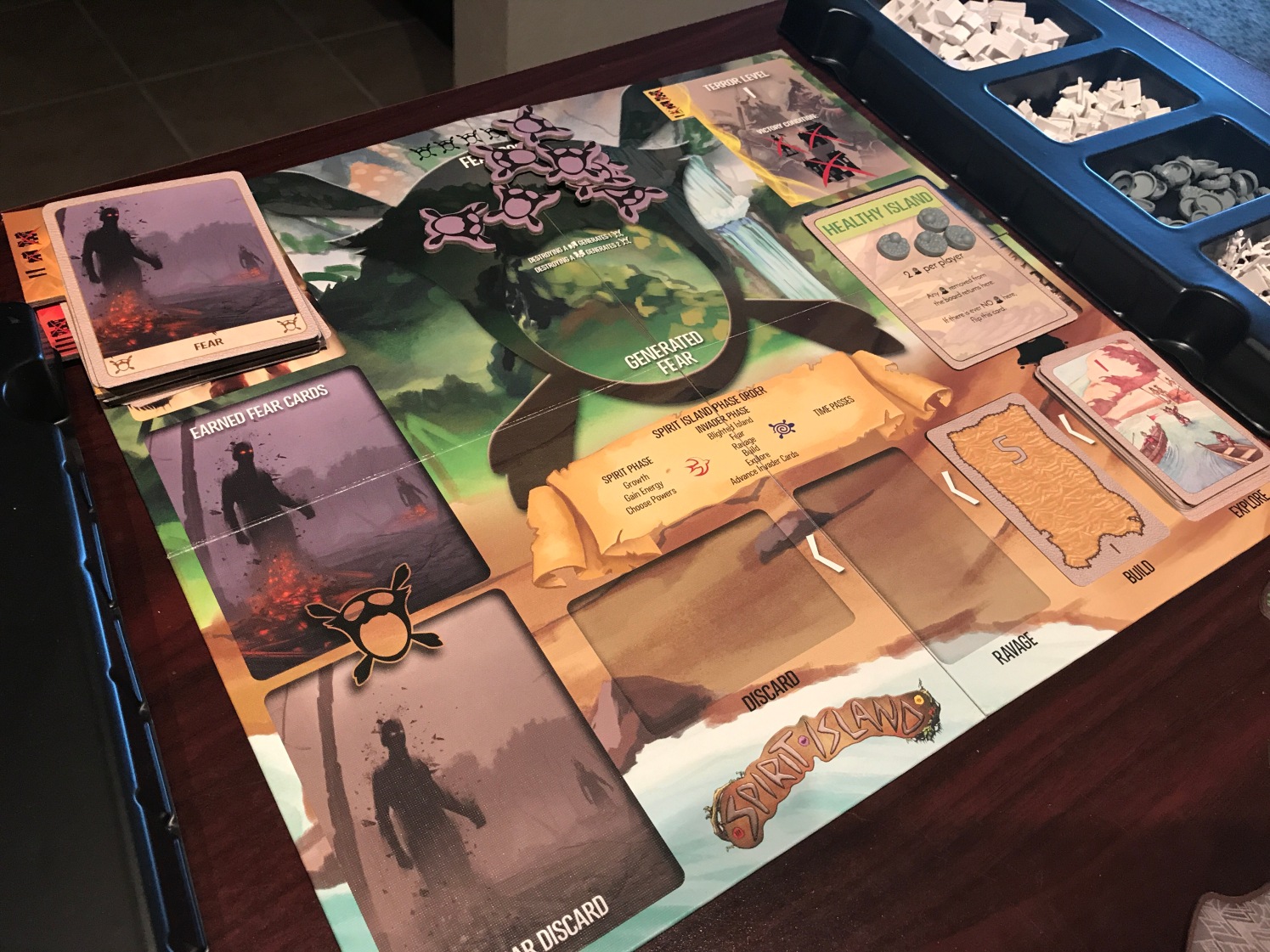 In the Invaders Phase, the invaders will explore, spread across the board, build, creating new towns and cities, and ravage, destroy the land, in specific areas delineated by cards on a track.  In this way, you must weigh your options and decide what needs protecting now or three turns from now.  You’ll also be working to gain Fear tokens, scaring off the invaders, because the more terrified they are, the more power you have to demolish them and the easier the game is to win. 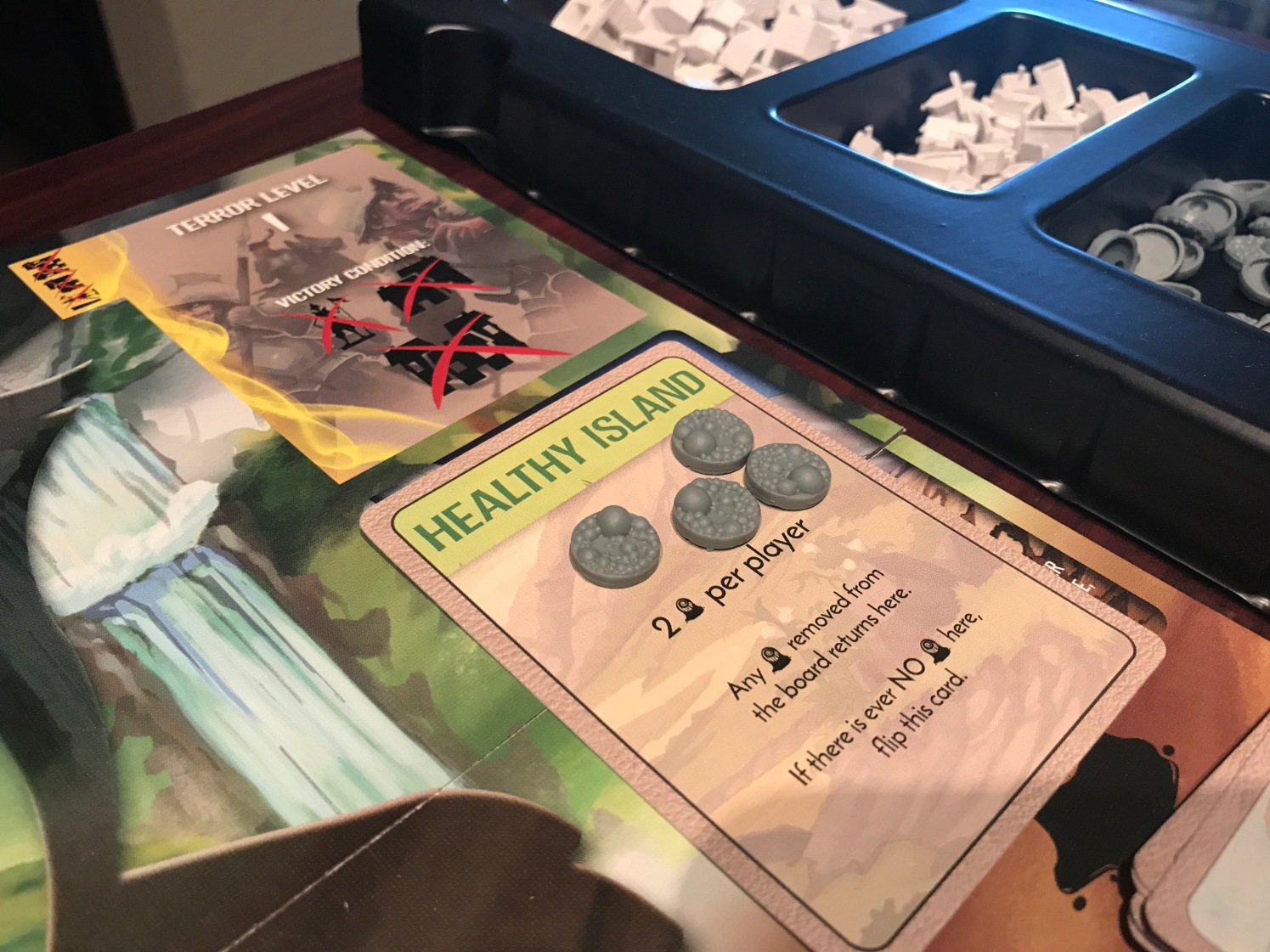 As I said, there are a lot of moving parts here, and I’m sure I haven’t gone over nearly everything but, the gist is that this is a game about Spirits and Invaders fighting for supremacy in a cooperative area control style game full of awesome powers, card drafting and planning ahead.

What Makes Spirit Island So Great?

So many things!  First and foremost, I have to address the fact that Spirit Island has a lot of mechanics that are happening at all times.  But the great part is that they all work so beautifully together.  Once you learn the rules, everything makes sense.  Everything gels together.  Your first play through will be full of bad decisions and that’s okay, because by round 2 you’ll be honing in on how to outmaneuver the invaders, utilize the Dahan and create a fear machine that will churn out terror every turn. 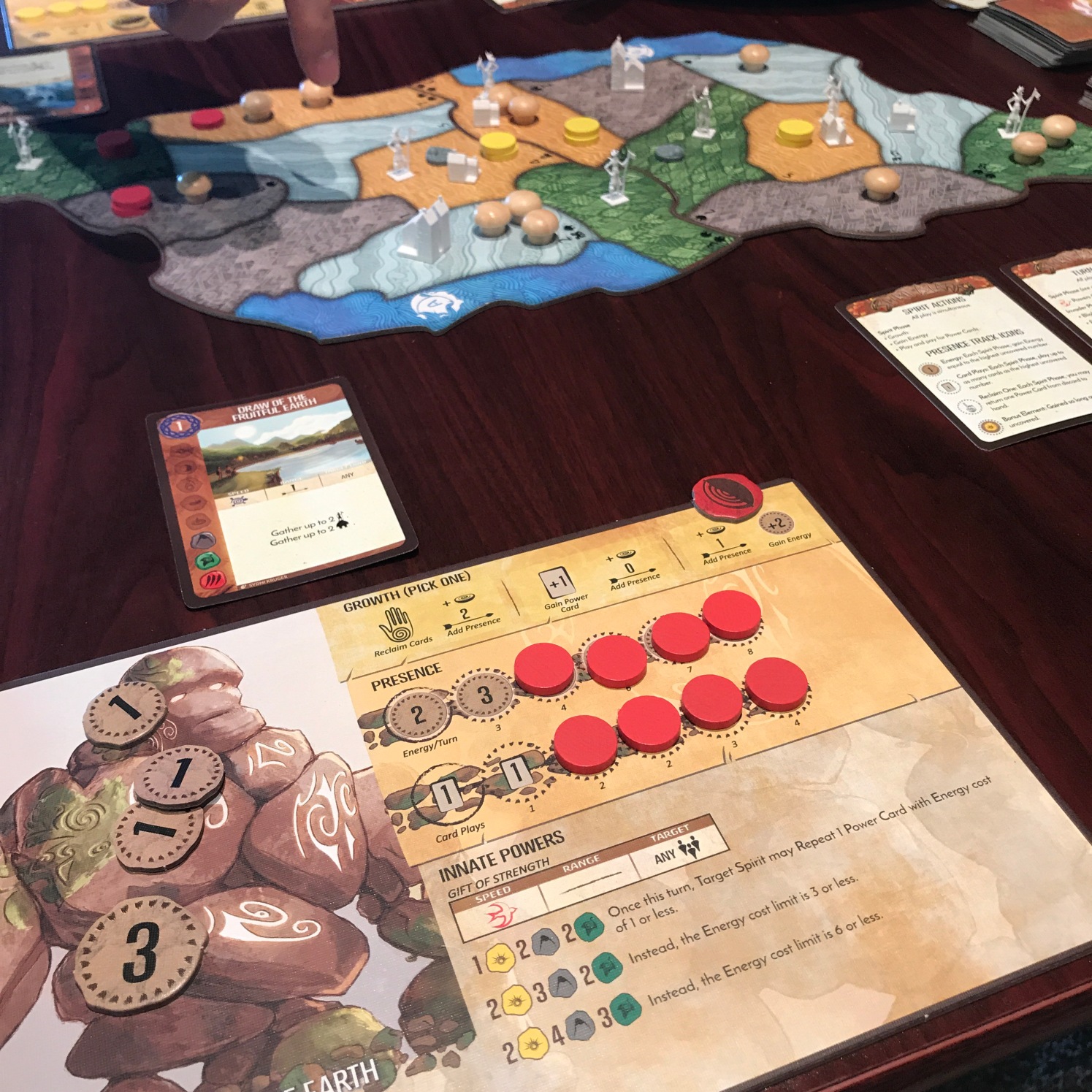 You’ll also realize just how important knowing how your character plays is.  In many ways, this is like a computer game like League of Legends or Overwatch.  Every character has a specialty and the more you play to those abilities the more successful you’ll be.  Perhaps you create tons of fear, or maybe you’re slow but defensive.  Keeping this in mind is key to making the most of every turn.  The theming in these characters is spectacular.  A water spirit is able to use the coast lines to move invaders into more opportune spots for destruction.  A rock spirit can create defenses for the Dahan.  It all just feels right.  And of course this is supported by some fantastic flavor text on each character and in the rulebook as well as artwork that is stunning. 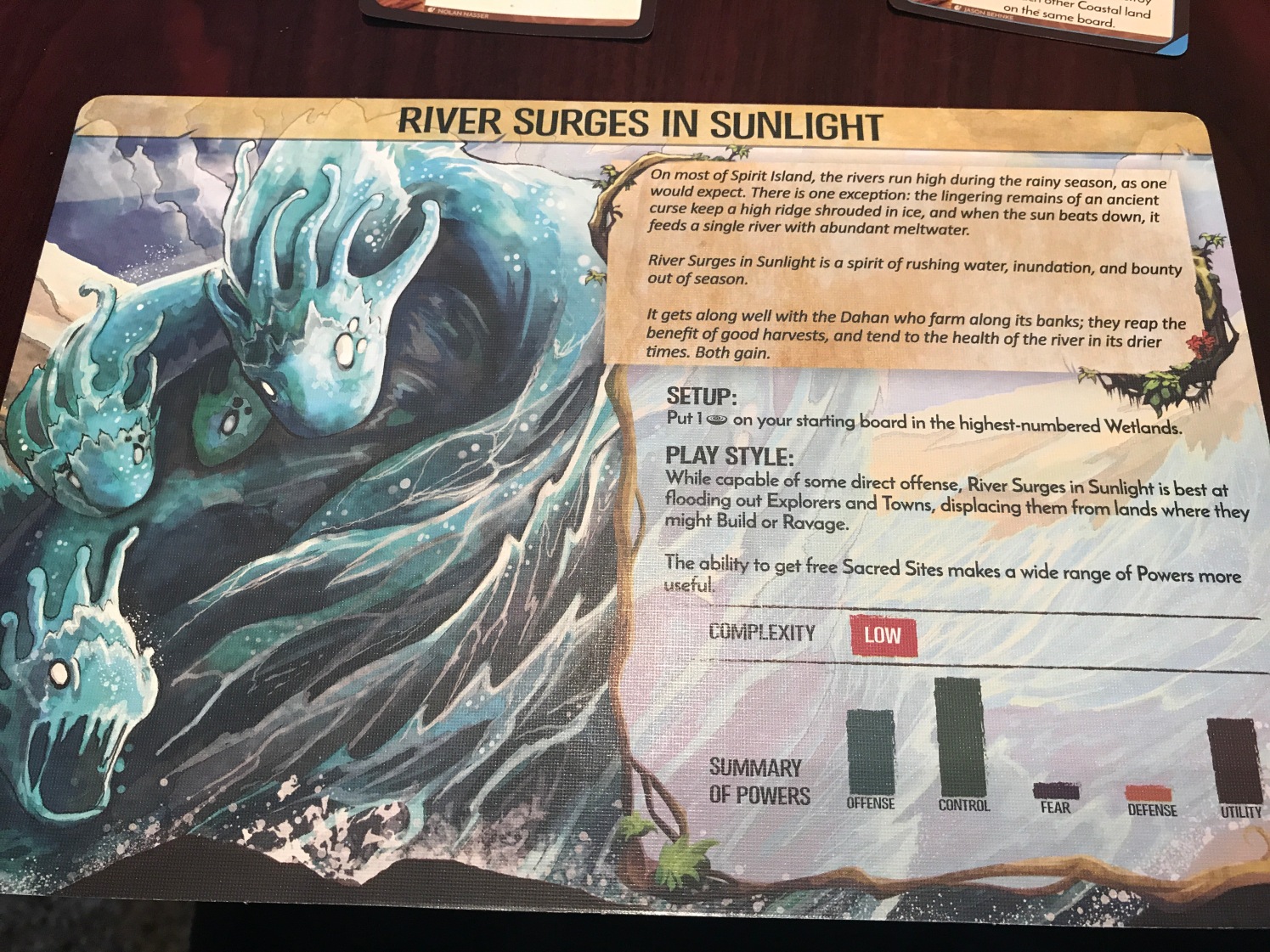 This is a game that will find you wanting to reset and replay the moment you finish the game.  Perhaps you want to try a new character or maybe you finally won and now you want to take on one of the many more difficult scenarios in the game, which see actual historical invaders try to take your island.  There’s even another side of the island boards covered in lush, realistic artwork to make the island seem more like an actual place.  I could keep going.  This game is simply that good.  The box is filled to the brim with options and variations and tons of characters to keep you busy for a long time.  And oh dear God there’s an expansion with EVEN MORE STUFF!!!

What Could Make Spirit Island Even Better?

If I really wanted to be picky, I might point out that the rule book is a little all over the place.  The first part introduces gameplay while the second half introduces key concepts as well as variations.  But I’d have to be very picky to complain too much about this as we often found the answer to any question we had pretty quickly.  This is a challenging game, and definitely not for the faint of heart when it comes to Co-Op games. 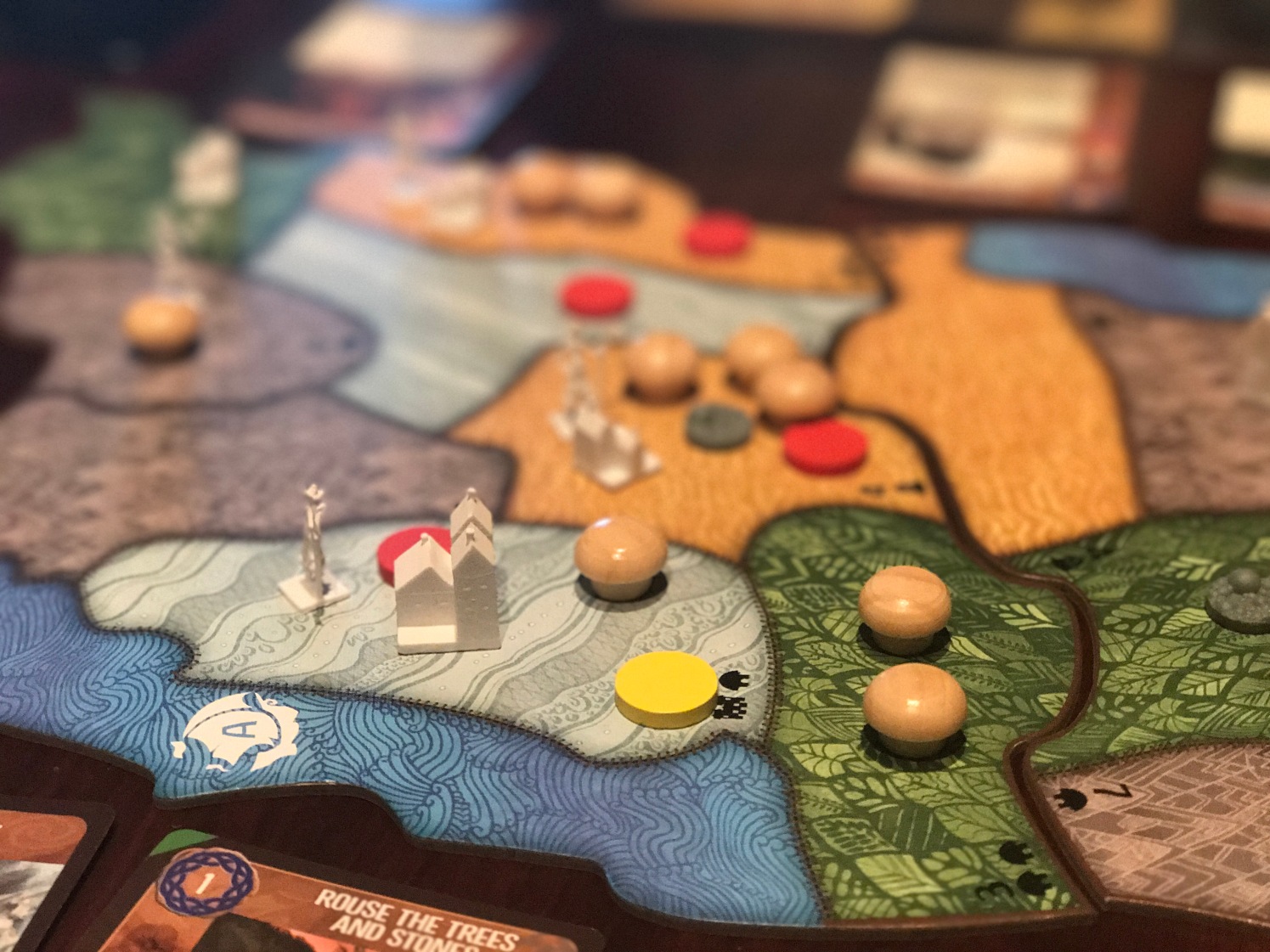 The only other small complaint I have is with the explorers, which are tiny little army men models.  Perhaps too tiny though.  In our box we found one that was broken.  Now that’s not to say that all boxes will have this issue, but it would have been nice if they were just a tad sturdier given that none of the other components suffer in this way.

If you haven’t guessed it yet, then I’ll spell it out: I LOVE THIS GAME!  It really is stellar.  In fact, I’d go so far as to say that it is my favorite Co-Op game I have ever played.  The mechanics are juicy but without ever being overwhelming and the sheer amount of customization and options that come in the box are glorious.  The game looks great and plays great and you’ll easily get lost in analyzing every turn to try and beat the invaders.  Sure, you’re going to lose a lot, but when you do win, when you finally take that last invader off the board, oh how glorious a victory it is.  Even as I write this, I want to go play and try out one of the challenges we haven’t yet conquered.  It’s that good.  Do yourself a favor and add this one to your collection before any invaders can snag up the last copy!